This is a searchable description of the content of a live stream recording, specifically “Ep.53 – Starting to construct a HandsOnSAPDev info API” in the “Hands-on SAP dev with qmacro” series. There are links directly to specific highlights in the video recording. For links to annotations of other episodes, please see the “Catch the replays” section of the series blog post.

This episode was streamed live on Fri 14 Feb 2020 and is approximately 60 minutes in length. The stream recording is available on YouTube. 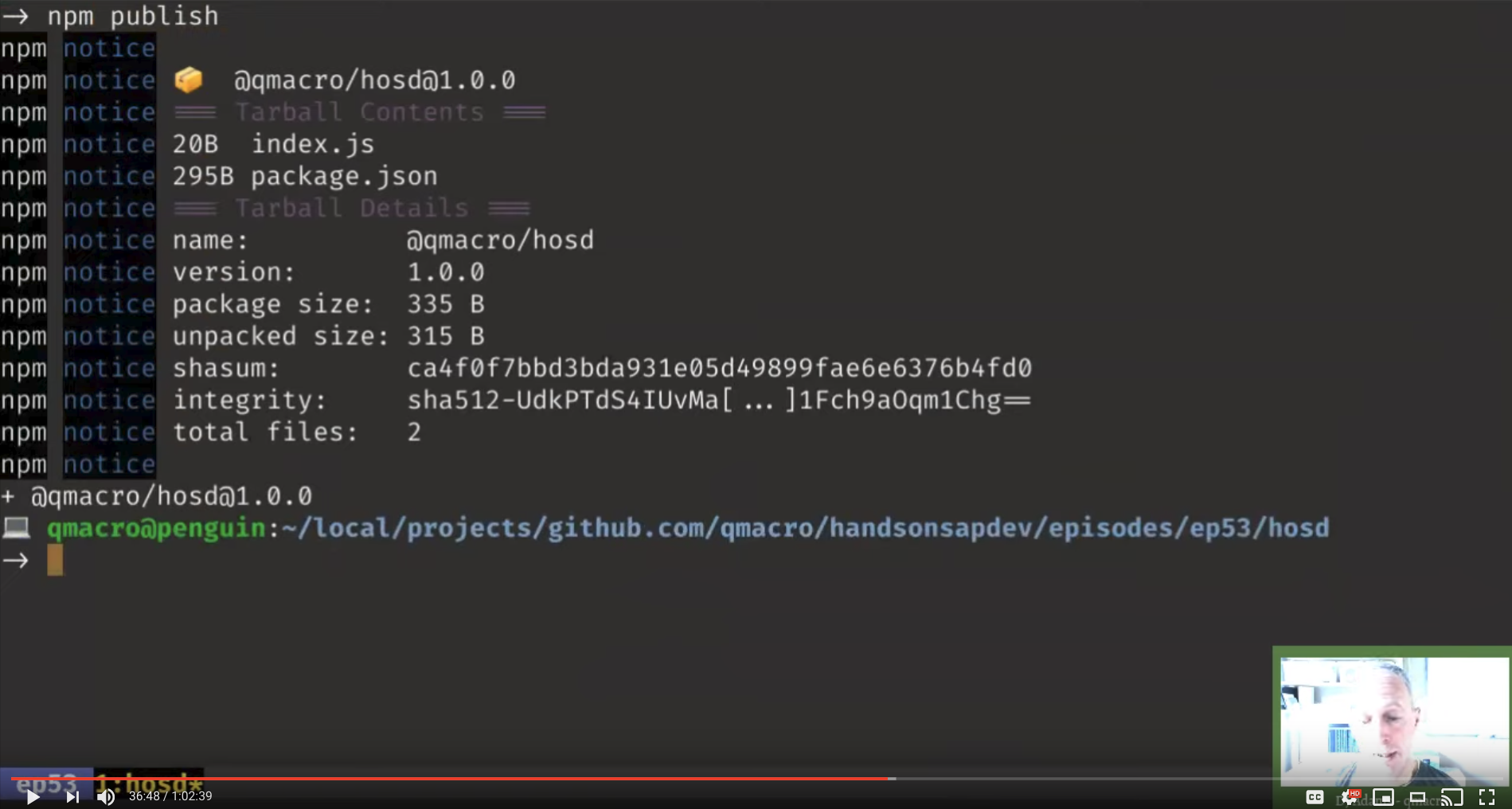 Brief synopsis: In previous episodes, and particularly in Ep.52, we chatted about introducing a way to programmatically search for episodes of this series, by title, tag, date, or someother metadata. We talked about the possibility of an OData service (CAP-powered, of course) and / or an npm module on the GitHub package registry. In this episode we’ll make some first steps towards this goal.

00:02:30 Moving to the description of what we’re going to do on the stream today, with a bit of an explanationof how the topics we want to cover can interweave with other topics that I also want to work on such as the Workflow Service on Cloud Foundry. As Andrew Barnard said in the chat, too – so many topics, so little time!

00:04:50 Celebrating the fact that Pieter Janssens has caught up with every episode recording, which is quite a feat! Some stickers coming your way, Pieter, congratulations!

00:05:45 Pointing out the Valentine’s Day gift I gave to M this morning – the Amicable Numbers pair of keyrings that I got from Maths Gear. Very nice!

00:09:10 Thinking of the two different forms the API could or should take – an HTTP-based service (CAP-based OData, of course) (and then perhaps a GraphQL endpoint if there’s interest) plus a JSON representation of the entityset in the form of the value exported from an installable Node.js npm module. Sort of an “online and offline” pair of API endpoints.

00:11:15 A quick shoutout to UI5con Belgium, including atweet from Nicolas Goris listing the live stream (and recording) links.

00:13:20 A quick discussion on npm package scopes. Originally there was just the main npm registry (at npmjs.com) but since then there are other registries for so-called “scoped” packages, i.e. packages with a sort of n~amespace prefix. We know of one of those, of course, the SAP npm registry, which is at npm.sap.com and contains lots of goodness including the @sap/cds-dk package family. With initiativeslike the GitHub Package Registry, package sharing and reuse is now democratised, in that anyone can publish packages in their own scope, which in this case reflects that person’s usernameon GitHub. So for example (and this is what we’re about to do) I can publish packages in the @qmacro scope.

00:16:30 Mentioning another GitHub feature that appeared last year, and that’s GitHub Actions, which is what I’d also like to include in this melting pot of tech and ideas. It’s a way of automating software development workflows, and is super powerful. I use it every day in the management of my own activities tracking (which I do as issues in a project in a GitHub repo, displayed and managed in a Kanban style board), and at this point I demonstrate a version of what I’d previously built – a GitHub action to add an issue to a project’s column.

The idea is that we could potentially use the GitHub Actions feature to automatically build new versions of the npm flavour of the API, and publish a new version, when another episode was added to the OData service and appeared there. But I haven’t yet thought any of that through – I think it will be fun and educational to explore this together.

00:21:20 Starting to go through the process of publishing a simple npm package (module) on the GitHub Package Registry, in my own namespace (scope) @qmacro.

First, we generate a Personal Access Token, with the appropriate authorisation scopes set, with which we can then use to authenticate the npm CLI with the GitHub Package Registry endpoint.

I have to be careful here not to reveal the token (altho I’ve already deleted it since the live stream ended) which I do by juggling screen displays around … whereupon long-time #HandsOnSAPDev family member Roberdinho reminds us that I used to use a “super sekrit” scene in OBS.

00:23:20 To store the freshly generated token I use the trusty pass program to save it in a new node.

00:24:25 Next we create a new barebones npm package hosd (short for HandsOnSAPDev of course) thus:

00:25:15 Now we can authenticate our local npm environment (via the npm command) with the remote package registry at GitHub which we do like this:

This results in the authentication being stored in our home .npmrc file, which we have a brief look at shortly.

00:26:50 At this stage we’re ready to start building out our fledgling package, and so compose the “simplest thing that could possibly work” in terms of what we want to export by default, in index.js:

We can test this out immediately and locally like this:

00:28:20 Now we create a project-local .npmrc file containing a reference to the user-specific npm package registry endpoint on GitHub, that reflects “my” packages:

00:28:50 The last step in setting this package up for publishing is to ensure the right values are specified in the package.json file, paying particular attention to the value for the name (@qmacro/hosd) and repository:url (git://github.com/qmacro/hosd.git) properties. We end up with contents like this:

00:30:10 We’re almost ready to publish the package! But first, there’s something we need to do, of course, andthat’s to get the repository set up locally (on my machine) and also remotely (on GitHub). So first we set everything up locally:

Now we have to set up the repo on GitHub. And for this, rather than use the native GUI in the browser (yes, kids, don’t forget, native means Web … anything else is “OS-specific”! ;-)) we use one of the two (two!) command line GitHub clients.

Announced this week was the new gh but there’s also the existing hub which I only discovered a week or so ago, and have been enjoying using ever since.

With hub we create the repo remotely, which still feels a little bit like magic:

This not only creates the repo on GitHub but also adds it as a remote to this local repo, as we can see when we check:

We make immediate use of this by pushing our changes:

00:34:25 Now is the time for publishing our fledgling package!

Just before we do, we take a look at what files we have, and the sight of the project-local .npmrc file reminds me to share a peek inside the main file in my home directory, i.e. ~/.npmrc. I use cut to only show a certain slice of characters, so as not to reveal the entire token, and with that we can see the configuration I have:

This includes pointers to the registries for @sap scoped packages and for @qmacro scoped packages, and in the last line you can see how the token auth is stored.

Success! And we see this package reflected in the repo on GitHub, in the “Package” section, with instructions on how to consume it (which is basically the same as everywhere else, i.e. npm install @qmacro/hosd@1.0.0). So we give it a quick try, first by installing it:

And then by using it in a simple script:

Which happily (but unsurprisingly) produces the result we want:

00:41:35 At this stage we can start to imagine what this could eventually look like, i.e. instead of the scalar value 42, we’d emit an object that reflected the metadata of the HandsOnSAPDev series of episodes, a bit like this:

This could be the basis of a local, “train-compatible” API, but what’s more, it could be sourced from the “upstream” online API which will be in the form of a RESTful endpoint (yes, the CAP Node.js OData service that we’re about to start building).

00:44:10 Now it’s time to turn our attention to kicking off this OData service, by having a look at the metadata I gathered just before going live on the stream. It’s (for now, to keep things simple) a list of episodes, with ID, title and some comma-separated topics, and in an online spreadsheet that I can easily export to CSV.

00:44:40 I’d originally experimented with storing the metadata as issues in a GitHub repo and pulling those out programmatically, but while GitHub repo issues are awesome, they didn’t quite stretch to the various bits of metadata I wanted to store about the Episodes. I did however show how to pullissues, in the terminal, on the command line, from a repo, with the new gh command line tool mentioned earlier, which works out which repo is relevant based on the local repoyou’re already in (in this instance, qmacro/test):

(I don’t particularly like the “Issues for qmacro/test” heading that is output, it reminds me of how the Cloud Foundry command line tool cf produces output, with headers that also get in the way, but anyway, what do I know?)

00:46:30 Starting a new CAP project to kick things off from the OData service perspective, and at least at theoutset I intend to follow the “simplest thing that could possibly work” approach again. There are many ways to organise data like this (episodes, topics, and many-to-many relationships between them), including the use of link entities, as described in the Domain Models – Managed Many-To-Many Associations section of the CAP documentation.

But for now let’s keep it simple, and just have a single String type property with the topics in there, comma-separated. That’s not half as bad as it seems, as we’ll be able to use thepower of OData system query options such as contains.

00:47:30 Checking we have the latest @sap/cds-dk installed globally (remember the depth=0 setting in ~/.npmrc is limiting the output here to something much more useful):

and add the simplest combination of data model and service definition that we can get:

We do take a look at the CodeList aspect as something we might use at some stage for the management of the topics, but save that up for another time.

00:52:10 We bring in the downloaded CSV file into the right place, as the right name (db/csv/qmacro-Episodes.csv of course), install the npm sqlite3 package, and deploy. And lo & behold, we have our OData service. Thanks CAP!

00:56:20 At this stage we can grab the value of the value property in the JSON representation of the Episodes entityset, using the classic combo of curl and jq, like this:

00:57:50 Adding this JSON to the @qmacro/hosd package’s index.js, i.e. setting the data to be the thing that is exported by default, we can now access that data with require. Lovely!

00:59:10 Incrementing the patch level of the @qmacro/hosd package (in package.json) and republishing the package, we then use npm update in our consumer project and see that it has indeed worked:

That’s it for this episode – a lot of stuff to take in, but hopefully it all fits together in our brains. And sets us up for some interesting learning and discovery together too.

Thanks for joining and taking part … and remember – #TheFutureIsTerminal!