Tie-breaker is used in games to decide the winner if both teams have the same points. Similar Tie-breaker logic has also been introduced in S/4HANA to decide the sales order plant if two (or multiple) plants can fulfil the individual sales order requirements. The concept with substituting the original sales plant with Alternative based confirmation (ABC) functionality has been described in my earlier blogs as in below links

This blog is to discuss the new ‘Tie-breaker’ logic in Alternative based confirmation (ABC) in Advanced ATP (AATP) of S/4HANA 1909 release.

The ‘Decision tree’ with ‘Tie-breaker’ logic is depicted in below image. 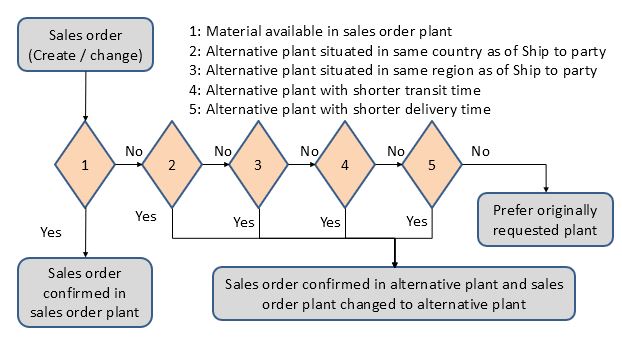 Let us consider the use case for US. Suppose,a manufacturing company has several plants in US and also in Mexico for supplies to customers in North America.  If the multiple plants can confirm the full quantity on the requested date or have the same delivery proposal (i.e same quantity with the same schedule line date), then the alternative plant will be selected based on the following sequences:

If the alternative plant can not still be decided, then the originally requested sales order plant is considered for the confirmation of the sales order.

A simple scenario in the context of EU is depicted in below image. A manufacturing company produces a particular product in four plants in EU (three in Germany and one in Denmark) . A customer of Germany orders for a material (FG220) with requested quantity as 31 Pc.  ATP (Available-to-promise) quantity is nil in plant 1010, 10 Pc in plant 1011, 30 Pc in plant 1020 of Germany and 40Pc in plant 1040 of Denmark. As there is no available quantity for the material in originally requested sales order plant 1010, then the functionality of Alternative-based-confirmation (ABC) of Advanced ATP (AATP) will be used to determine the best alternative plant to confirm the sale order. 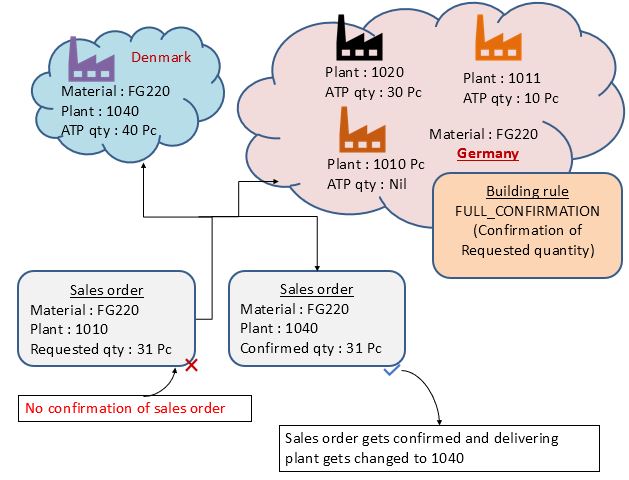 In the above scenario with requested order quantity as 31 Pc, plant 1040 is the only plant that can confirm the sales order as shown in the below image. Alternative plant situated in Denmark has been selected though the original requested plant is in Walldorf in Germany. Note , there is no need for a tie-breaker in this scenario as plant 1040 is the only plant which can confirm the full quantity of sales order. 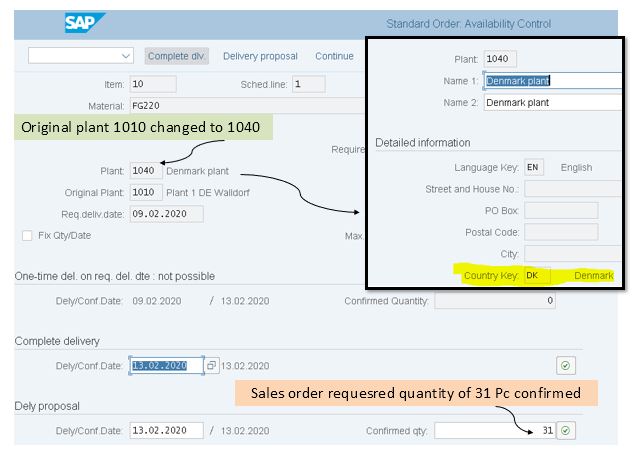 Now, let us consider that the customer (of Germany) has ordered for quantity of 30 Pc. In this situation, 2 plants – 1040 of Denmark and 1020 of Germany can fulfill the requested order quantity and now SAP ABC’s Tie breaker logic will be applied to determine the best alternative plant 1020 situated in Frankfurt in Germany as shown in below image. Note that the Ship-to-party (customer) is also in Germany in this case. 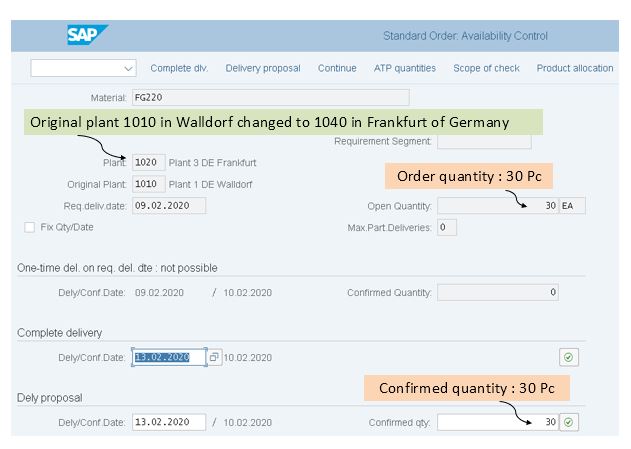 Now. Let us consider another scenario with sales order requested quantity as 10 Pc from a customer (Ship to party) within Germany as depicted in below image. 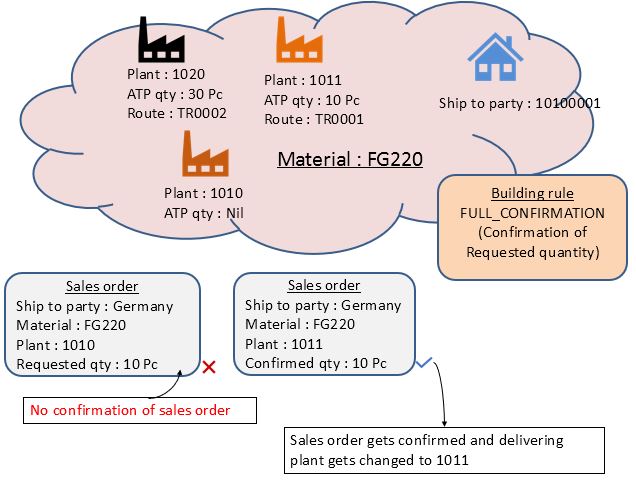 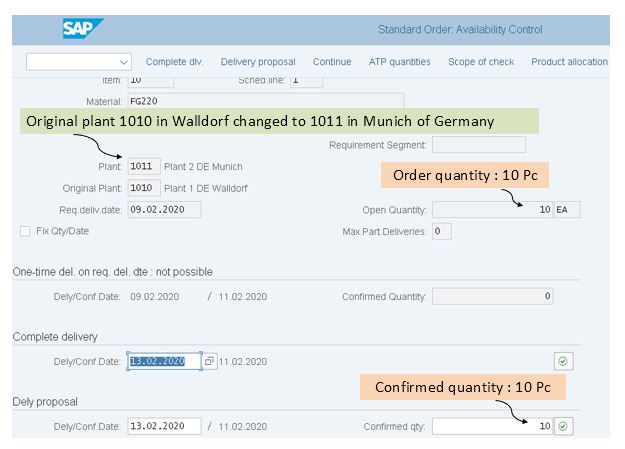 If the requested order quantity would have been 11 Pc, then alternative plant 1020 will be considered as that is the only plant (within Germany) can fulfill the order as the other plant which can confirm the order is plant situated in Denmark.

I will conclude this blog highlighting that the settings (configurations) required for this Alternative-based-confirmation (ABC) of Advanced ATP (AATP) is much less and very simple compared to the configuration of ‘Location substitution’ of Global ATP (GATP) of APO. Also, the rational for selection of alternative plant is more business oriented using KPI like same country, shorter transit time etc etc.

Advanced ATP is being built from scratch in S/4HANA (unlike embedded EWM and TM within S/4HANA) and is beoming one the mighty tools in Order promising’. Refer my other blogs in link https://people.sap.com/mrinalkanti.roy#content:blogposts

for other excellent functionalities of Advanced ATP (AATP).

Thank you for sharing..!!

Thank you for the great explanation.

I have 2 comments based on my experience with regards to step 1 & step 5:

The first step is not the ‘Material available in Sales order plant’, rather the system directly performs ATP on the alternative plants based on the 4 step geographical search and only if ATP cannot be confirmed in the alternates, the sales order plant is considered for ATP.

And still the fall back scenario is that the system searches for ATP capability by arranging the plants in an alphabetical sort sequence.

AATP runs the car on auto-pilot mode with no option for manual intervention;
However it would be a great, if the system could provide some customising capability to control the outcomes.