It took me nearly two years to write the second part of this partition series. The first one for BW partitioning can be found here.

The main question of this blog: How to determine the best partitioning combination?

In an ERP or S/4 HANA system it is possible that a table is approaching the 2 billion mark. This is a HANA design limit for a column store table (per partition). In this case you have to partition the table. But different than on a BW system there are no standard rules for a partitioning. This means you have to choose a partitioning rule by your own. But how to determine the best partitioning combination?

At first check if partitioning is needed at all which means check the tables with the most row entries. There is a limit per table/partition of 2 billion rows by the design of HANA.

If your alerting is working correct you will receive an alert (ID 27). It looks like this:

Determines the number of records in the partitions of column-store tables. A table partition cannot contain more than 2,147,483,648 (2 billion) rows.”

The limitations are described in SAP note 2154870. 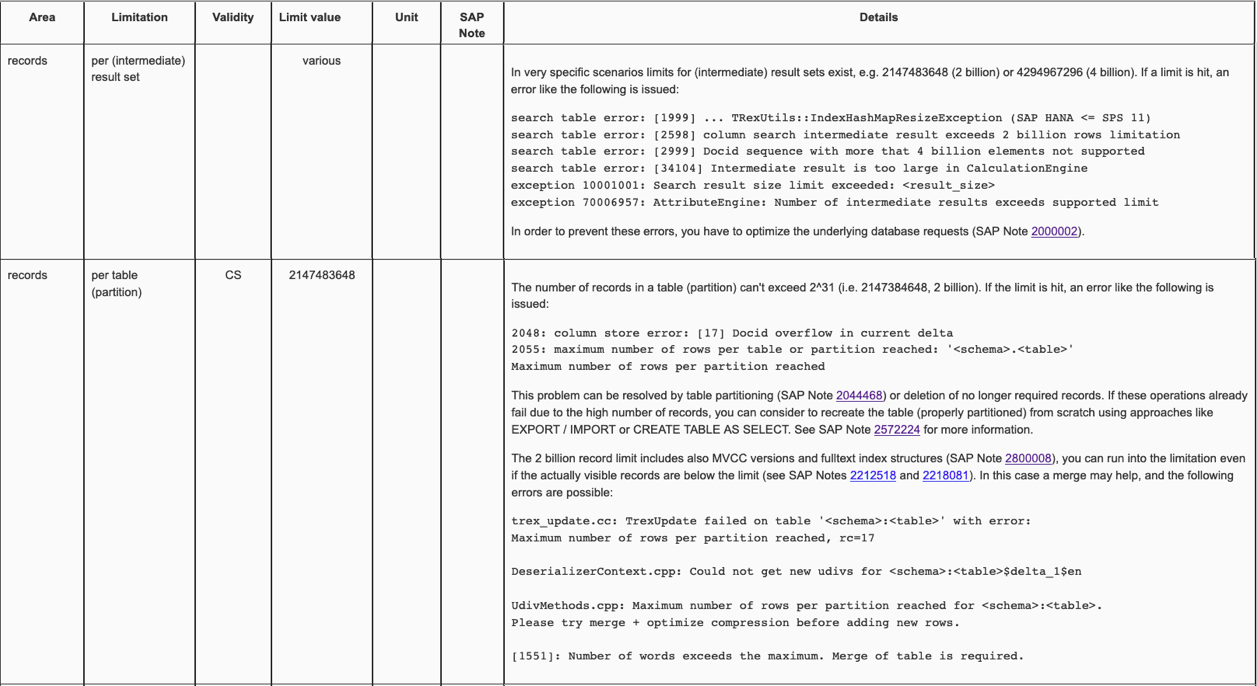 Check all tables by high amount of records. Therefore, you can use the SQL from 1969700 (HANA_Tables_TopGrowingTables_Records_History).

Rule of thumb for the initial partitioning:

In our example we determined BSEG and BSIS as tables with high amount of rows. For timely planning of maintenance you should act when the table exceeds 1,5 billion entries.

For our scenario BSEG has 4,5 billion and BSIS has 4,1 billion rows. So, they are already partitioned. But is this partitioning over the time since the initial creation still optimal?

To determine the optimal partitioning combination, we have to clarify some terms:

In the context of databases, cardinality refers to the uniqueness of data values contained in a column. High cardinality means that the column contains a large percentage of totally unique values. Low cardinality means that the column contains a lot of “repeats” in its data range. In a customer table, a low cardinality column would be the “Gender” column. This column will likely only have “M” and “F” as the range of values to choose from, and all the thousands or millions of records in the table can only pick one of these two values for this column. Ok, to be accurate nowadays we have to add a third value for diverse “D”.

The selectivity basically is a measure of how much variety there is in the values of a given table column in relation to the total number of rows in a given table. The cardinality is just part of the formula that is used to calculate the selectivity.

Hash partitioning is used to distribute rows to partitions equally for load balancing. The number of the assigned partition is computed by applying a hash function to the value of a specified column. Hash partitioning does not require an in-depth knowledge of the actual content of the table.

Range partitioning creates dedicated partitions for certain values or value ranges in a table. For example, a range partitioning scheme can be chosen to create a partition for each calendar month. Partitioning requires an in-depth knowledge of the values that are used or are valid for the chosen partitioning column.

Partitions may be created or dropped as needed and applications may choose to use range partitioning to manage data at a fine level of detail, for example, an application may create a partition for an upcoming month so that new data is inserte

For details please read the “Designing Partitions” section in the documentation.

We determined that BSEG has 4,5 billion rows. Now we need details on which column the table has to be partitioned.

The recommendation of SAP is to use a HASH partitioning on BELNR in note 2044468.

Note 2289491 describes a range partitioning on BUKRS. As you can see it always depends on how your system is being used. Ok, let’s find it out in a test environment.

To quote the HPI course on the partitioning details (In-Memory_Data_Management_2017):

“There are number of different optimization goals to be considered while choosing a suitable partitioning strategy. For instance, when optimizing for performance, it makes sense to have tuples of different tables, that are likely to be joined for further processing, on one server. This way the join can be done much faster due to optimal data locality, because there is no delay for transferring the data across the network. In contrast, for statistical queries like counts, tuples from one table should be distributed across as many nodes as possible in order to benefit from parallel processing.”

To sum up, the best partitioning strategy depends very much on the specific use case.

The main challenge for hash-based partitioning is to choose a good hash function, that implicitly achieves locality or access improvements.

There are recommendations for the most famous SAP standard tables within note 2044468. If you are close to the standard and don’t use a lot of custom code try this partitioning recommendations first. If you have heavy load with own statement which uses a totally different execution plan you may have to determine your own partitioning columns. Be aware of the partitioning limits!

If you want to check the optimal partitioning combinations use this statement:

From the result you have to analyze the “where” clause and find a common pattern.

Take as few fields as needed. Normally fields like MATNR, BELNR or DOCNR are selective fields and well suited for partitioning.

For a deep dive you can additionally run the DataCollector with the selected statement_hash (HANA_SQL_StatementHash_DataCollector) within the statement collection (1969700).

Additionally, you can use the ColumnStore statistics (HANA_Tables_ColumnStore_Columns_Statistics_2.00.030+ ) which is also part of the SQL collection to analyze how many scans are on which column. If you are using multiple clients, it may be wise to add the field MANDT as partitioning criteria.

Only 2 values for BUKRS “0010” and “0020”. This means we have a too low cardinality and partitioning won’t work well on this attribute. So, this means both extreme too high and low are bad.

We have about 30 clients in this test system which means it makes sense to use it in the partitioning clause on the first level as entry point.

With 4,5 billion partitions we need about 12-15 partitions which means 300 million rows per table (rule of thumb: between 100 – 500 million), if we would use only single partitioning. With multilevel partitioning the fill degree of the partitioning depends on the single column data cardinality of each level. 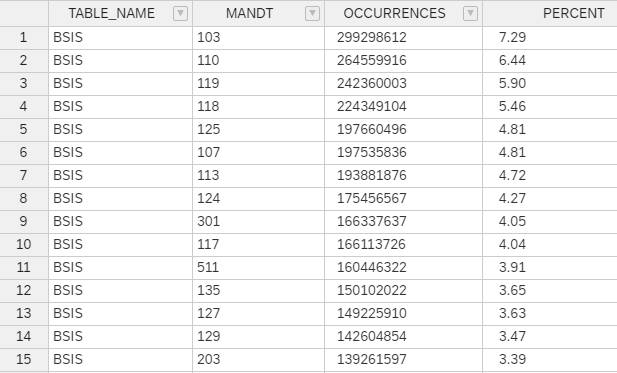 The recommendation of SAP is a RANGE partitioning on BUKRS. If RANGE on BUKRS or a similar range partitioning is not possible, use HASH partitions on BELNR.

We can’t use BUKRS as partitioning object due too low cardinality. BELNR alone has a high cardinality and could be not efficient enough.

2 recommendation is in this scenario:

With 4,1 billion partitions we need about 12-14 partitions which means 300 million rows per table (rule of thumb: between 100 – 500 million), if we would use only single partitioning. With multilevel partitioning the fill degree of the partitioning depends on the single column data cardinality of each level.

As already mentioned in the first part of this series, we can optimize the splitting procedure with some parameters which have to be adjusted according your hardware:

There is no silver bullet for every customer. It depends always on the usage and the change of values ​​in a table. Additionally the changes of the applications and the different selections. Try different partitioning columns in your test system and check the performance. You should also optimize the compression of those big tables from time to time. The optimize compression will take place automatically as part of a delta merge process, but decided from the system itself. On huge tables it can be that this happens pretty late which results in a bad performance. So, stay tuned and give your system reguarly health checks. SAP provides such services called TPO, but also some well known HANA experts provide such services 😉