This blog post describes our experiences and findings while doing a proof of concept (PoC) in the SAP LinuxLab where we containerized the SAP ABAP application server components and deployed them on various Kubernetes environments. It will also point out potential benefits and challenges.

Please note that this document is neither a complete solution, nor does it provide any current product or development status. The current support status of ABAP application servers running in a container(-orchestration) is documented in SAP note 1122387.

The SAP NetWeaver Application Server ABAP can be broken up into multiple components and thus are subjects for containerization. The first natural choice for containerizing would be the Application Server instances (AS) because they are the most stateless, cattle-like part of the stack, and they can be scaled relatively easily. However, we also opted for deploying the mandatory components of the ABAP Central Services, namely the Message Server and the Enqueue Server. Finally we added the optional SAP Web Dispatcher and SAProuter to the setup.

The underlying SAP HANA database was out of scope for our PoC – it was regarded as a given external resource that can be connected to via configurable secure store credentials.

Our effort was to put all the above components into separate container images, map them to appropriate Kubernetes objects and tie them together in a way that we can use Kubernetes features in the best way.

Our goal was to create a generic ABAP Kubernetes deployment that can integrate into any Kubernetes environment, regardless if it is an on-premise, self-managed Kubernetes-based product (e.g. CaasP, OpenShift) or a Kubernetes as a service offering in the public cloud (e.g. GKE).

In Kubernetes, applications are distributed via pre-built container images along with Kubernetes YAML deployment files.

Our goal was to build generic ABAP images that can be customized with environment-specific input parameters which are configurable via Kubernetes YAML files. At deployment time they are injected into the Kubernetes environment. For example, the HANA database connection parameters will be injected as Kubernetes secrets.

Some attributes are static, immutable values and not configurable in this PoC:

Also, we selected the most current, backward-compatible SAP kernel that will work with most NetWeaver and S/4HANA releases.

The actual workload in an ABAP system is performed on the Application Server in a server-side session. This is where most memory and processing power will be consumed aside from the database, so this is the most important entity to be scaled with Kubernetes according to workload demand.

It is very easy to scale up application server instances (Pods) as workload grows, but the scale-down can lead to broken user sessions on the system if Pods are just arbitrarily destroyed in a cattle-like manner.

We placed the application server in a Deployment with one initial replica. A Deployment can be scaled-down in a user-controlled order, as opposed to a StatefulSet where only a reverse-ordered Pod scale-down is possible, regardless of actual user session load.

We solved the hard shutdown issue by implementing a Horizontal Pod Autoscaler logic: priority Annotations are assigned to the Pods according to their current session load. Whenever a scale-down is being executed, the server with the lowest priority will be issued a soft-shutdown, and sessions will be slowly drained from the Pod.

As the application work processes are producing several log files, a sidecar container is used to pull the logs and forward them to a log target for each Application Server Pod. This way log files are persisted, e.g. for root cause analysis after work process failures and subsequent container restarts.

The Message Server is a singleton instance per design, as well as the Enqueue Server. For greater flexibility we created separate container images for each, but placed them inside one Pod called ASCS (ABAP SAP Central Services).

Since it is necessary for an Application Server to reach the Message Server via a static DNS name, we placed the ASCS Pod in a StatefulSet which makes it resolvable.

Since the Message Server is basically stateless, a container restart is not critical. The Enqueue Server keeps the lock table so it is not completely stateless. To implement high availability for the Enqueue Server it is recommended to start a secondary enqueue server that keeps a copy of the lock table. This is known as Enqueue Replication and could be achieved by creating another singleton Pod. However, this was out of scope for this PoC so far.

For accessing the system via SAP GUI, the SAProuter is able to connect a client to the correct application server. In contrast to the Kubernetes load balancers, the SAProuter is aware of the proprietary SAP DIAG protocol and forwards connections to the corresponding sessions. The SAProuter is stateless and can be scaled easily if necessary. It can be deployed as a Pod, DaemonSet or Deployment.

The last component is the Web Dispatcher which is a load balancer enhanced with proprietary security features and endpoint control. It is stateless and can be scaled up easily if needed. Since we needed only one Web Dispatcherinstance in our PoC, we bundled it together with the Message Server and the Enqueue Server into the same Pod.

Note: It is possible to skip the Web Dispatcher and use the Kubernetes load balancer to connect to the ICM(Internet Communication Manager) processes of the application server containers directly – this is however critical from a security perspective and would constitute a non-standard SAP setup.

After all relevant SAP components were organized in Kubernetes Pods, we had to make sure that they can properly communicate with each other, as well as with external clients.

Communication between Pods in a Kubernetes cluster is done via Services. Since Kubernetes does automatic port mapping on a Node where multiple pods expose identical ports, this setup allows SAP application server scale-up on a single Node without port conflicts.

Both the Application Server Deployment and the ASCS StatefulSet were encapsulated in Kubernetes Services.

The external load balancer IP resp. its DNS-resolvable host name is the single entry point for all client communication.

The load balancer does not actually do as its name implies. In this setup it is just used as an external communication entry point. In fact, the load is distributed by the Web Dispatcher and Message Server using SAP Logon Groups.

Finally, we organized all SAP Kubernetes objects in a dedicated Kubernetes Namespace ‘sap’ for logical separation from other cluster artifacts.
Furthermore, multiple SAP instances could be deployed on a single cluster by assigning them to separate Namespaces, e.g. ‘sapqa’, ‘sapdev’, ‘sapprod’.

So here is a picture of how it all comes together: 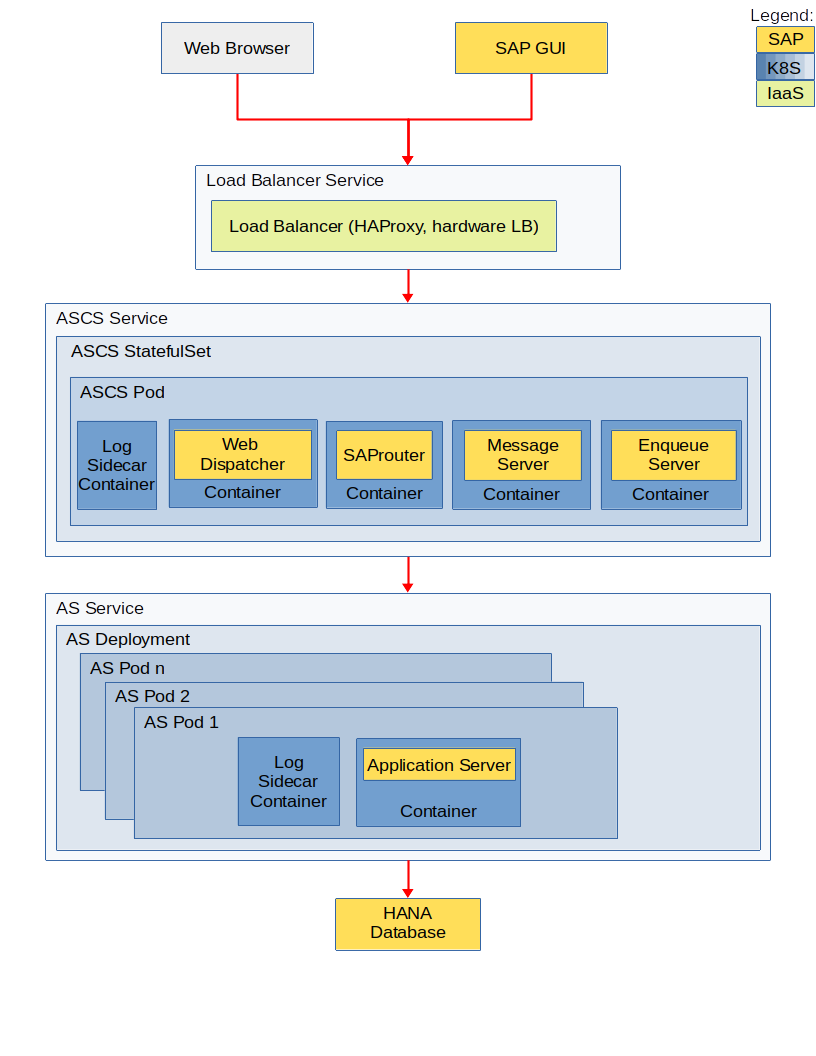 In principal it is possible to run ABAP in a Kubernetes environment. It allows rapid and flexible deployments especially for test, development and training systems. Due to the comprehensive architecture of the ABAP application server components, some challenges and overlaps with Kubernetes functionalities exist and must be addressed accordingly (e.g. load balancing, name resolution, lifecycle).

Thanks to the pre-built container images there is no need to install every new ABAP instance as traditionally done on bare metal hardware or virtual machines. We just provide a collection of Kubernetes deployment files and some container images which are dynamically deployed within the Kubernetes cluster.

(Re-)Deploy ABAP instances in a matter of seconds

Once a container image is downloaded and cached, Kubernetes will bootstrap complete ABAP systems in a very short amount of time. All ABAP containers will be orchestrated across the available Kubernetes Worker Nodes automatically whenever there is a service disruption (e.g. hardware outage).

Scale a small system large with just one click

Separating the scalable Application Server from the ASCS by placing them in dedicated containers allows for spinning up multiple SAP dialog instances with one command or one click. Because of the encapsulated design of dialog instances and the usage of virtual service endpoints in Kubernetes, scaling up ABAP systems is pretty easy.

Kubernetes standard features include automatic scaling of Pods based on CPU utilization or memory pressure. These auto-scaling functions can be leveraged to elastically scale an ABAP system when detecting very high or low load. Shared hardware resources in the customers data center can then be utilized more efficiently, especially for non-productive systems without any live intervention of an administrator.

One benefit of Kubernetes is the built-in load balancing between Worker Nodes. However, ABAP provides its own load-balancing and enqueue mechanisms according to the used access method (SAP GUI, Web GUI, RFC, …). Thus, there is a function overlap, and Kubernetes load-balancing can only be used in a limited manner.

Containerization and the underlying infrastructure platform add multiple network layers, so accessing the SAP system from a client (SAP GUI, browser) is more complex than accessing bare-metal systems. On the other hand, Kubernetes tools give the ability to permanently check the system availability and network perfomance to identify issues.

The database holds ABAP programs, all the business logic and all customer data. To connect a containerized ABAP system with a specific kernel, a compatible SAP HANA database with the correct initial database load is required.