Recently there was a need of sending file along with the custom timestamp, as we know when we tick Add timestamp in the receiver File adapter timestamp gets appended to the file with the format <FileName>-YYYYMMDD-HHMMSS but I want timestamp before filename and it must be in custom format

Since we will be executing shell script. command should start with sh followed by the directory

Two directory above is confusing, let me explain why I used two source directory in the sender channel.

In the next poll that is after 5 sec(in my scenario) sender adapter will find a new file in send folder and process it. File from send folder is sent to target directory

Now we place a file in the source directory

Testing is successful, file has got timestamp before filename and in the custom format 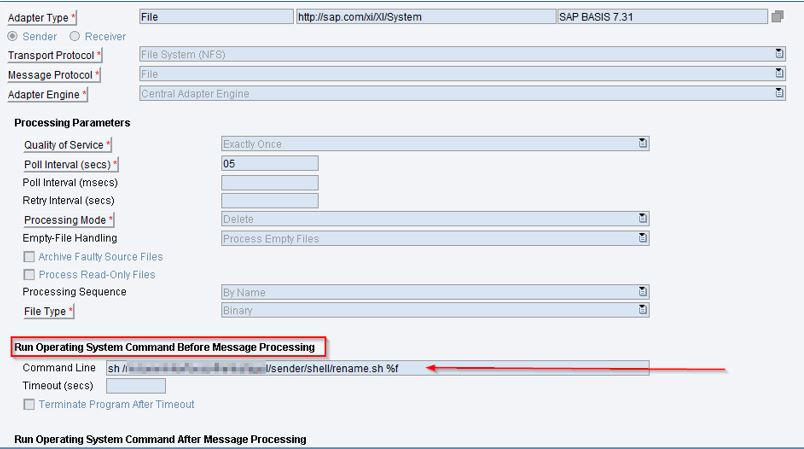 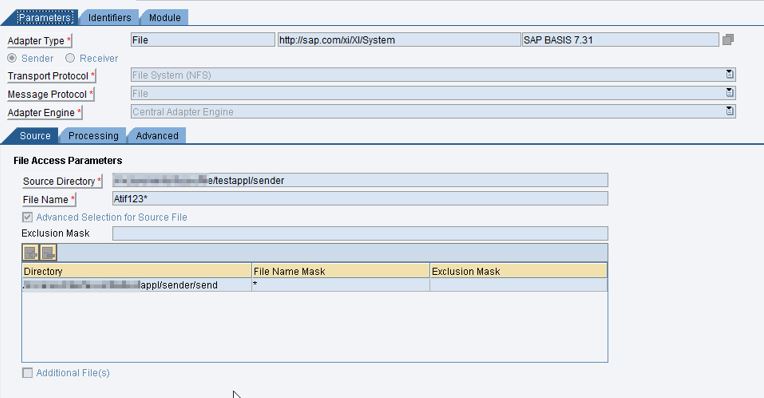 Hi Aathif,
Thanks for the blog.
Was there a mapping involved in your scenario? or just a passthrough ?

It is just a pass through scenario.

I would like to know if you have same code, not to add timestamp but to delete expecific content-type - application/xml or Filename via this OS commands.

for more info check below sites

First thanks for the prompt response,

I would like to delete one file with the name MainDocument that it’s stored in the SFTP all the time when something is written down in the SFTP server.

Because the SFTP adapter if you select the box – StoreAttachments the adapter tries to create a MainPayload inside PI and write down the attachments with Dynamic Name plus MainDocument.

I already aligned with a project to SFTP server don’t care much because I’m overwriting this document  (0 bytes) every new file comes, but I got curious to use these commands in the SFTP server.

I stored in the SFTP one shell script basic: 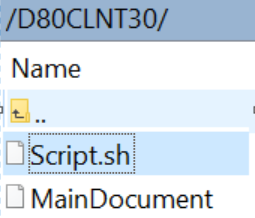 Also, one point I would say the Dynamic Configuration enabled in the UDF would be a better solution in case the user in the channel some restrictions in the SFTP.

How should your script (which is to be executed on your PI system's OS) remove that file? 🙂

In this case you should write the script which would connect to the same SFTP site/folder and remove the file.

I will not be able to implement it in this way.

Thanks for the explanation

I followed the steps, but getting this below error.

Could you please let me know if there is some prerequisite that needs to be configured before?

Could you please paste your script here? did you add space after sh in the communication channel

also please test your script in any linux terminal.

First, thanks for the prompt response.

Yes I have added space in the sender communication channel.

PFB script file, and if we are using a windows OS, is this requirement still achievable or we need to do some changes?

Nope, If you are using windows OS please go for powershell script.

you will have to use move command instead of MV.

I have written a .ps1 script for the same requirement and successfully tested on the powershell terminal;

The file is moved to the /sender/send destination with timestamp added to the filename.

But when running the same script from sender channel OS command line before message processing, it fails.

Is there any specific format of writing the command for ps1 scripts.

File is moved successfully when tested in powershell.

But fails in PO

I would suggest you to create another batch file in the windows and code like below.

Please check below blog on how to execute sctipt in windows

Thanks for the support, I got it running now, but when I use Move-Item command, nothing happens, but it works fine for Copy-Item.

Any guesses on this?

Good it worked for you.

I am neither Powershell nor Unix expert so i am not sure why Move-Item command doesn't work for you.

my guess is file may not have appropriate permissions to move from the directory (i may be wrong) so please check if the file has got all the permissions (Read, write, execute).

Yes I was also trying with the same command but it was failing; we also need to set SET-ExecutionPolicy RemoteSigned in Powershell(run as administrator).

And then we were good to run powershell scripts.

Thanks for all the help 🙂