The basics and general scripting to do this, have already been explained in some other blog posts  (thanks to Reiner Hille-Doering, Michael Jung and others), but I thought it would be worth to show the way step-by-step to combine it in a real-life example I recently created for a Proof of Concept.

The goal was to have a visualization component, that is capable to show images in a dynamic way and ineract with them. That means the images are driven by a data source, they can be filtered and selected, and the visual appearance is dynamic and configurable.

In Part 1 I showed how to start developing the component from scratch and bring it into a first testable version. If you did not read Part 1 of this blog post series, please do so here:

In this Part 2 I will lift some limitations of the current version, make the component more flexible and add functionality to it, so one can finally use it in various scenarios.

Limitations of the Part 1 version

The Part 1 version of the composite is good to demo the functionality, but it has the following limitations, which prevents it from beeing used in “real-life”-scenarios:

I will now remove each one of these limitations set-by-step.

The data source of the image data is already beeing passed in to the composite via the interface parameter “inDataSource”. But so far we are doing the selection of the images with a fixed dimension value (e.g. “DS:2,DIM:id_11”), specific to our sample data source.

To change this behavior, I add another interface parameter called “inImageUrlDimension” with type “String”:

Then I adjust the Global Script function “createImages()” to utilize this parameter as dimension to select the image urls from the data source. I change the selection criteria from former definition

This let’s me pass in the dimension of the datasource, which holds the image URLs, dynamically from the application using our component.

So far the dimensions of the images are defined by the width and height properties of the IMAGE_TEMPLATE and the height property of the BLOCK_TEMPLATE we used so far to create the objects and set/copy their properties. This was hardcoded in the version 1 of the component.

Then I adjust the Global Script function “createImages()” to utilize these parameters to set the width and height of the images and blocks while creating them within the script:

A block object does only have a height property, hence only has a setHeight()-function.

One of the most important things of this component is the interaction between the composite and the embedding application. Specifically this means if you click on an image, you want to recognize and get an information about the image clicked. With this you can e.g. filter a datasource/chart for a selected image-content.

To enable this feature I first need an interface event and I call it “imageClicked”:

This event should be fired every time an image is clicked and this can later on be detected by the application using the composite.

Since we cannot pass any value directly in the event itself, we need to create a global variable “gImageIDClicked” with type “String”:

and an interface function through which the embedding application will be able to get the image id, that was clicked, from the composite:

This function acts as the “getter” for the global variable “gImageIDClicked” and just returns it’s value: 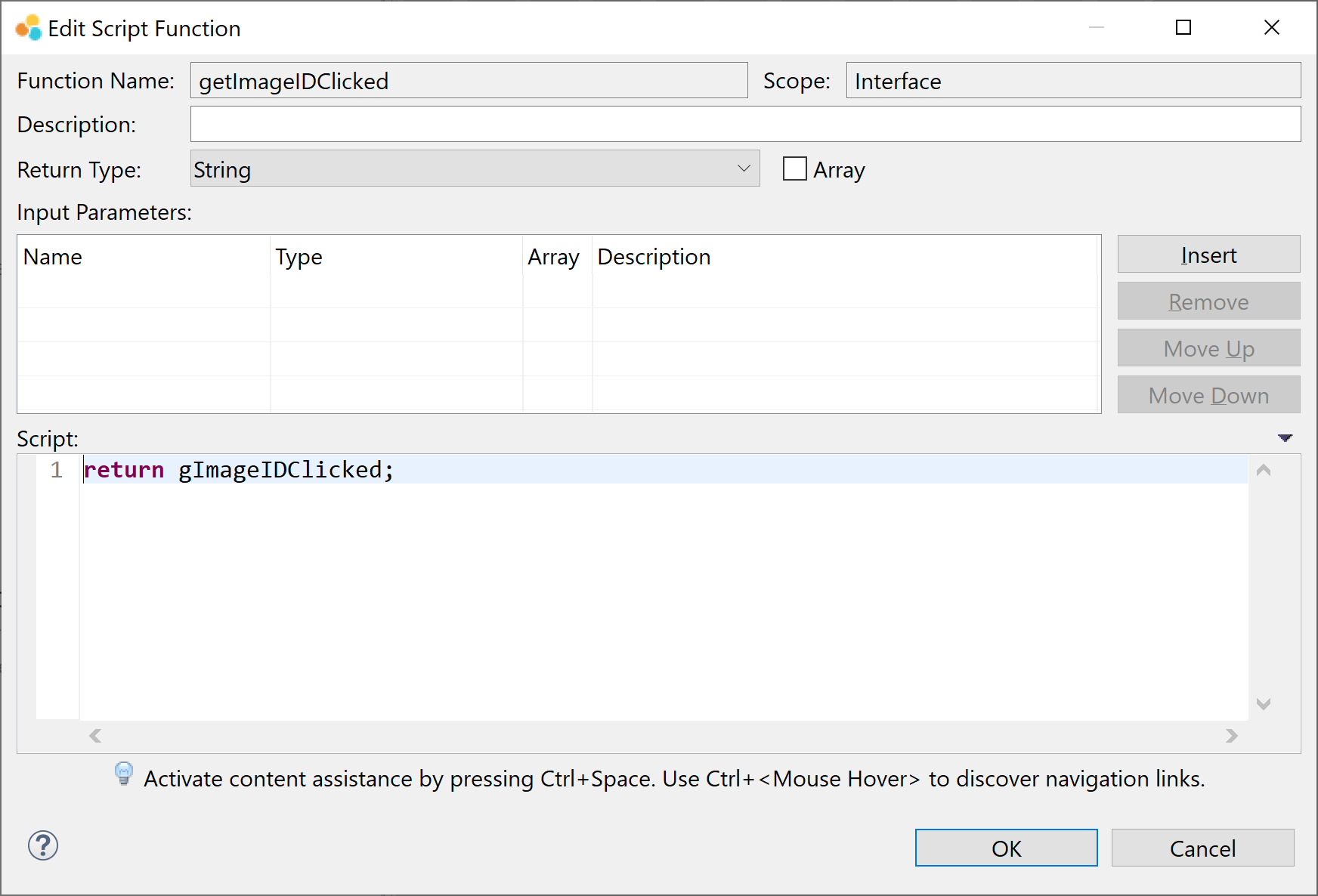 So far I only have one “dynamic” dimension of the datasource (“inImageUrlDimension”, see above). In our case we don’t want to return the Url of the image displayed, but an ID associated with the image. To make this in the same way dynamic as I did for the Url dimension, I need another interface property for passing in the images’ ID dimension. I call it “inImageIDDimension” and it has the type “String”:

Now that I have all things created I need, I will put it together in a new Global Script function called “imageClicked”:

This function has a String input parameter “imageUrl” and no return type: 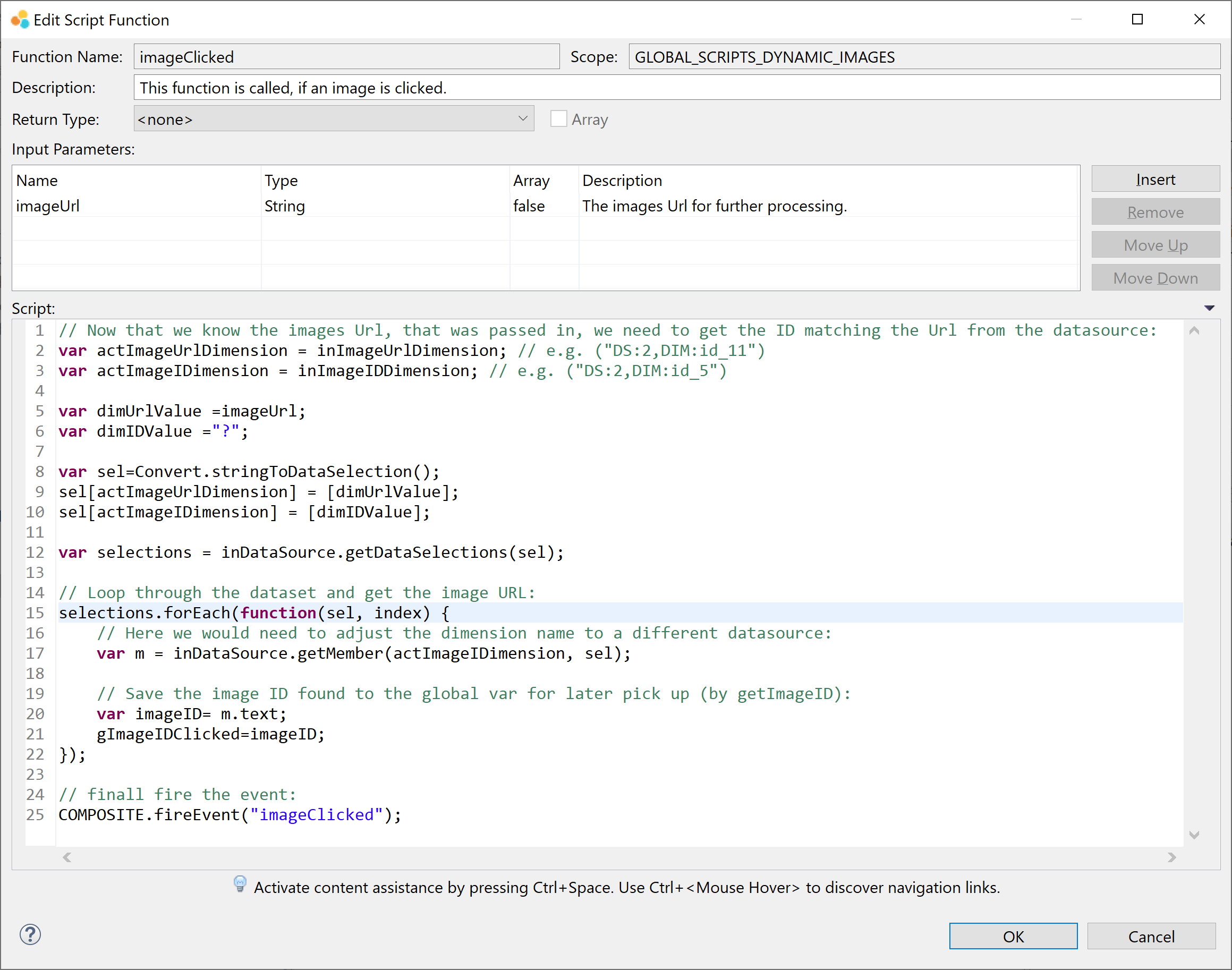 The script will create a selection object with the passed in imageUrl and the imageIDDimension and find the corresponding image ID for the given imageUrl in the datasource. It then stores the ID in the global variable “gImageIDClicked” and fires the event “imageClicked”.

The last step is to add this function to the onClick()-Event of the IMAGE_TEMPLATE object and pass in the actual images Url:

Since all image objects are copied from this template object, “this.getImage()” will do the trick:

That’s it. Now I will show you, how to use the new features in the sample application.

If you remember the sample application from the first part of this blog post series, you will recognize there are some new interfaces available in the image composite now: 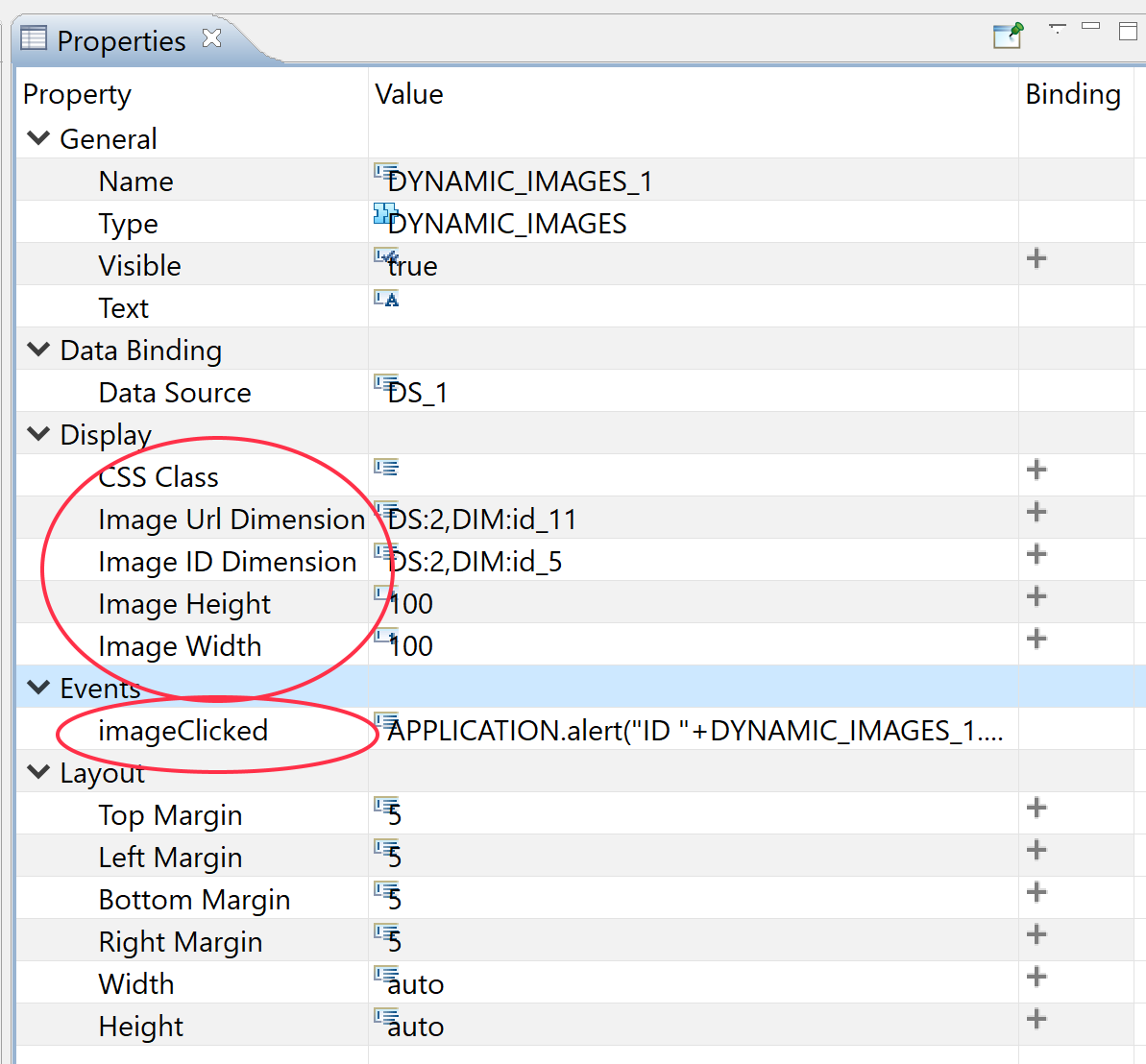 We see here the ImageUrl- and ImageID-dimensions of our datasource (“DS:2,DIM:id_11” and “DS:2,DIM:id_5” in our case), the actual height and width of the images and the imageClicked-event.

You may find the image dimensions of your datasource e.g. through the dimension selection of a dimension-filter object: As you may see in the screenshot above, everytime you filter the datasource you need to call the update()-function of the dynamic images composite to reflect the changes here!

In the imageClicked()-event of the composite we just open an alert-windows to show the actual selected image’s ID using the following code:

We can get the ID using the getImageIDClicked() function.

When running the sample application and clicking on one of the pictures, we see the result: 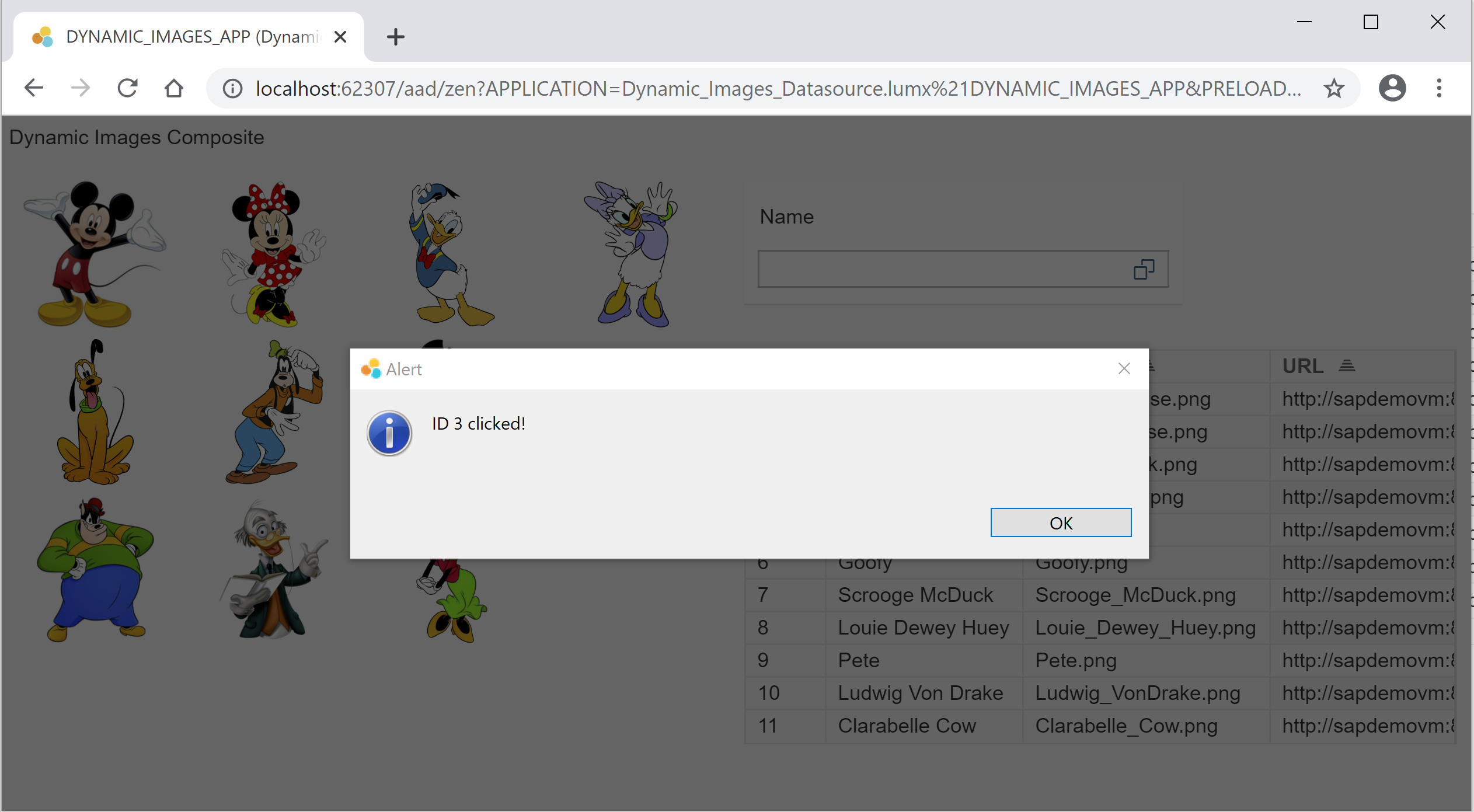 Of course we could also use the ID to filter or drill-down in some other datasources.

Now our dynamic image composite is ready for using in real-life-scenarios and was already successfully presented in a customer proof-of-concept.

Thanks and have fun with this component! 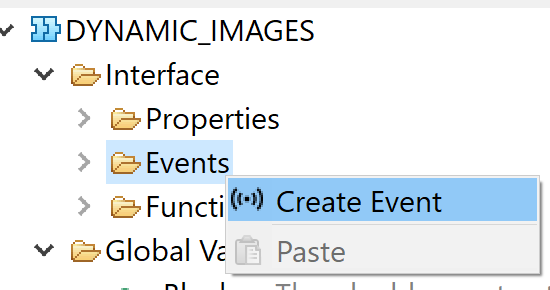 Very nice again. You really use all the nice little features and APIs, e.g. Convert.stringToDataSelection() and COMPONENTS.copyProperties.

Is it possible to pass a value (stored in a global variable in the host application/main application) to the composite?

I answered your question in your thread here:

Never mind. thanks  for the Tutorial