This is part 2 of a three-part blog series, covering The Why aspect of Newcastle University’s journey to SAP S/4HANA, which takes a look at the business case and motivation behind our implementation.

This post is broken down into the following sections: Business Case for S/4HANA | SAP Digital Transformation Tools | Looking Ahead to S/4HANA Phase 2

When compiling the business case for S/4HANA we didn’t attempt to explicitly define any business or financial outcomes. Of course this would be a sensible approach, but we felt there was sufficient justification based on the perceived value of S/4HANA. We could have opted to spend a further 3-6 months leveraging all the various SAP digital transformation tools to flesh out the value proposition, or as we decided, put that time into getting started. We have, however, parked the outputs from the many tools available for further review during phase 2 of our S/4HANA implementation.

In 2017, we started to explore our SAP roadmap. The SAP Business Suite was showing its age, and with the announcement of maintenance ceasing in Dec 2025, we contemplated our strategy for SAP systems. As with many large organisations, the University has more demands than it can satisfy, so prioritisation is a constant ask. We felt that by tackling the S/4HANA conversion early in our SAP roadmap, we would have a solid foundation for subsequent developments, and be up-to-date for the many system integrations that would be impacted in future projects.

We sought to clarify what SAP should be the single source of truth for, documenting the current versus desired status. Before we could write the business case for S/4HANA, we needed a guarantee from SAP that Student Lifecycle Management (SLcM) would be maintained beyond Dec 2025. At the time, SLcM was part of S/4HANA Compatibility Scope and this concerned us. Following numerous calls with product owners and lobbying SAP via the Higher Education & Research User Group (HERUG), SAP announced SLcM would be removed from Compatibility Scope from S/4HANA 1809 FPS02. While we have gone live with an earlier release (1709 SPS04), more on this later, it was the reassurance we needed.

Our business case was predicated on the maintenance driver, but also on the ever-increasing innovation gap between SAP ERP and SAP S/4HANA. Many SAP customers have decided to take the ‘wait and see’ approach, watching how the ecosystem reacts, and some hoping SAP bows to pressure to extend the maintenance deadline (update 04/02/2020: SAP has extended the maintenance window as covered in their press release). Delaying the implementation would only have added to our technical debt given the scale of development and operations at the University reliant on our SAP ERP system. If we were to remain with SAP for our core ERP system, we would want to build on solid foundations with the latest technical capabilities. There’s a strong Total Cost of Ownership (TCO) argument too, as the simplified architecture in S/4HANA, combined with SAP’s principle of 1 (a single solution for any given business requirement), should drive efficiencies in development and business activity. 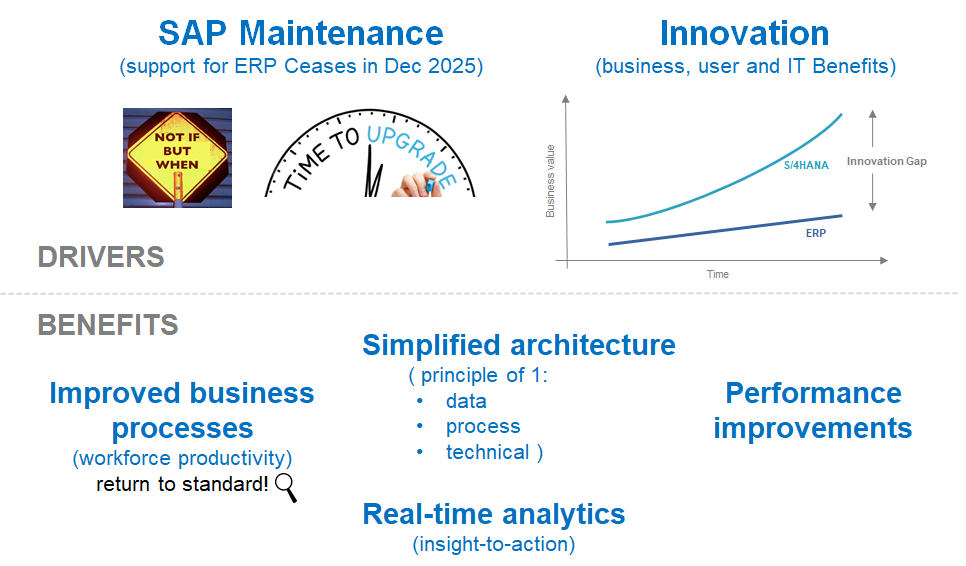 The primary drivers and benefits of our S/4HANA business case

The anticipated business benefits will be mostly realised during phase 2 of our project, when we look to the improved next-generation best practice business processes and attempt to return to SAP standard where possible. And there’s the prospect of leveraging the artificial intelligence-enabled automation that’s being incorporated into S/4HANA. We expect to see a slight performance improvement with S/4HANA, but as our ERP system was already running HANA with code optimisations applied where needed, the needle isn’t likely to move much.

The business case for S/4HANA was approved in late 2017 together with others for Recruiting (replacement of a standalone third party system with SuccessFactors) and Business Intelligence (Microsoft Power BI integrated with SAP BW and other non-SAP systems). These were to be the priorities for the first phase of our SAP roadmap to renovate the University’s enterprise system landscape, including all existing SAP systems. The University’s Executive Board endorsed the principle of the University retaining a core ERP system and target completion of the renovation exercise within five years, ahead of the 2025 deadline.

There is a plethora of tools offered by SAP to help customers plot their digital transformation journey. The best summary I’ve seen of the available tools was the following slide presented by SAP. 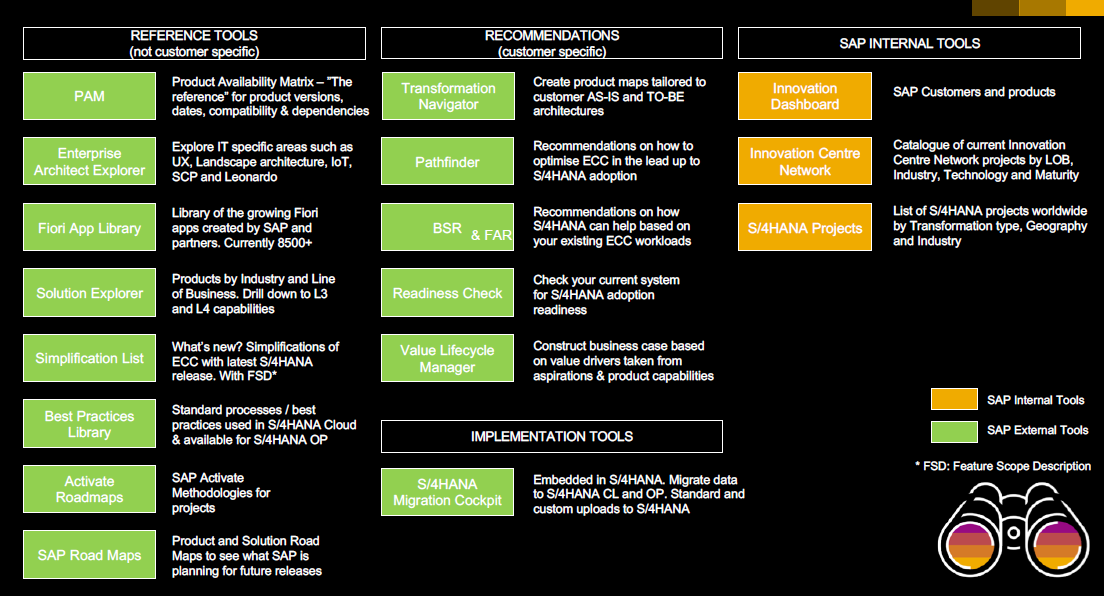 It’s beyond the confines of this blog post to extrapolate fully on all of these tools. The list below indicates the tools we ran and I offer a few words on how we utilised them:

Other worthy mentions include:

Some tool output examples are shown below. 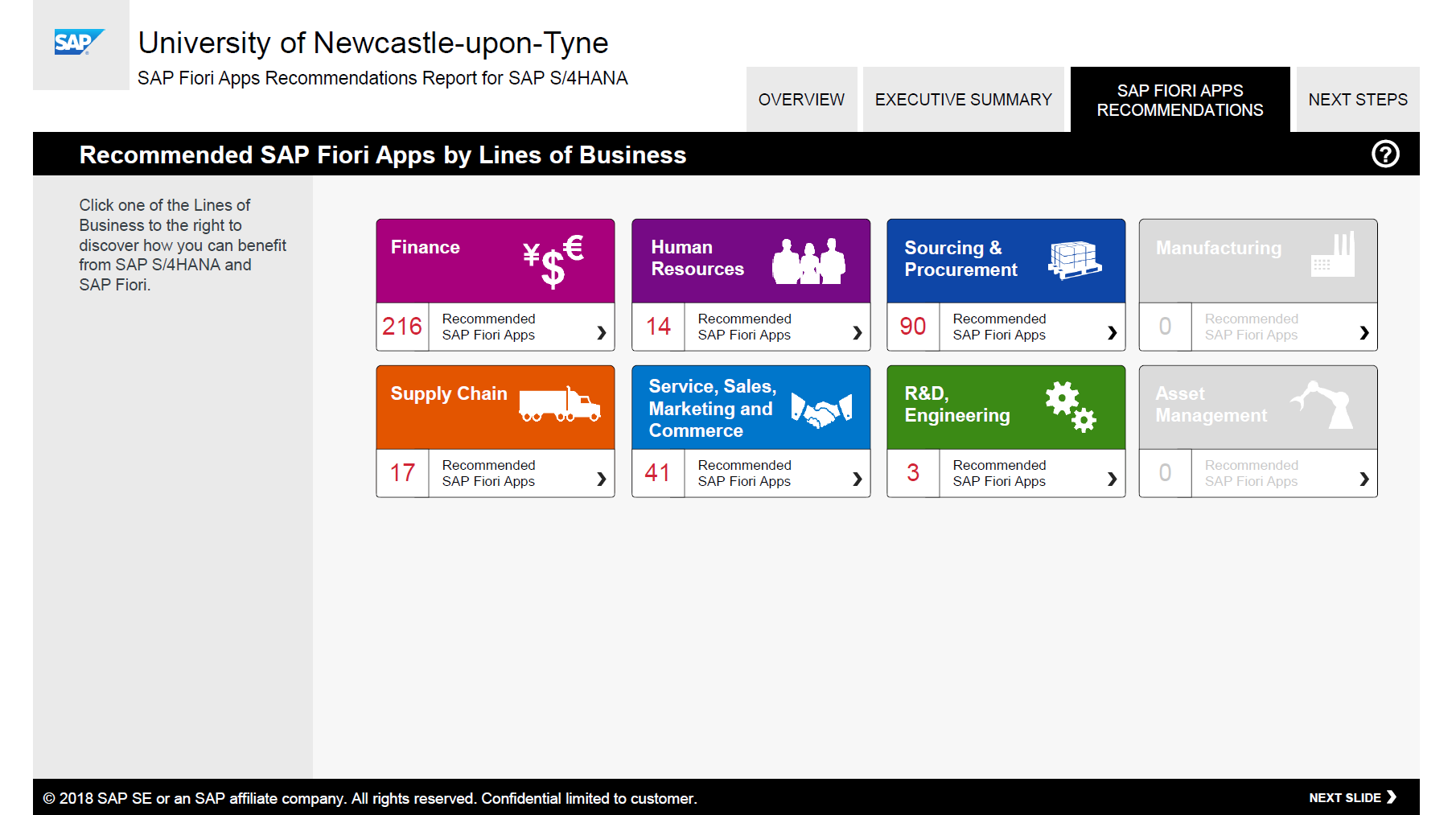 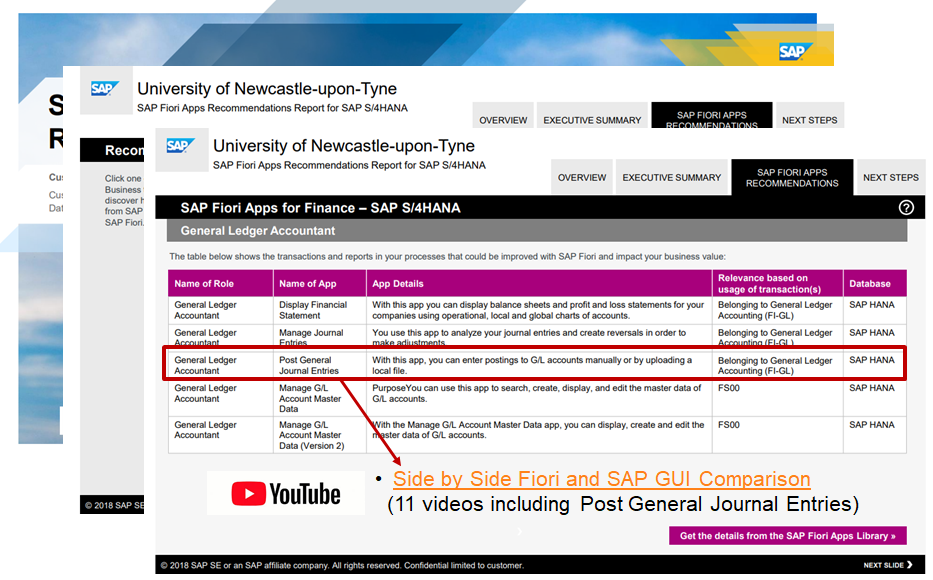 Looking Ahead to S/4HANA Phase 2

During phase 1 of our S/4HANA project, we focused on the technical platform upgrade. This will enable us to focus our efforts during phase 2 firmly on user needs, working systematically through each functional area to re-engineer our business processes.

It would have been remiss of us to not consider the anticipated benefits during phase 1, albeit realisation would come later. Drawing inspiration from SAP’s UX for S/4HANA Virtual Bootcamp, we held an S/4HANA Discovery Workshop where project team members were invited to share their findings from research and the outputs from the various tools discussed above. This included presenting short YouTube videos on S/4HANA (e.g. The SAP Fiori User Experience for SAP S/4HANA) and demos of current SAP ERP business processes (classic transactions) versus their improved S/4HANA equivalent (Side by Side Fiori and SAP GUI Comparisons). 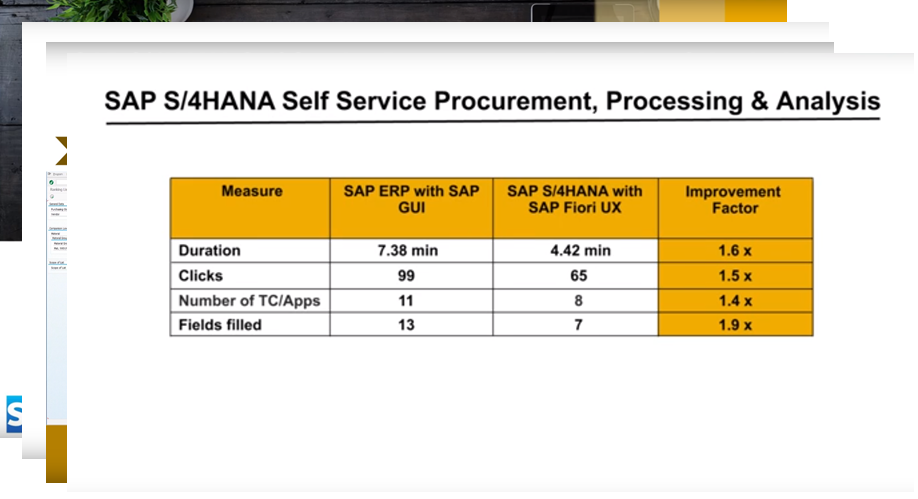 We exported the Fiori App Relevance and Readiness report to a spreadsheet and enriched with usage statistics from our SAP ERP Production system, for the SAP transactions which had Fiori app replacements. By adding this data we could determine number of current users, transaction execution frequency and the authorisation roles, to provide an indication of where the impact would be greatest from a value perspective. We will also need to be cognizant of the need to truly assess users needs end-to-end when building new business role content, to consider not just how S/4HANA capabilities can help to drive process improvement but also to tackle inefficiencies such as re-keying of data.

We also talked through and shared key content from SAP community evangelists such as the inimitable Jocelyn Dart, leveraging great content such as:

With hindsight, there was some feedback that this session was held too early in our journey, albeit we only intended to plant seeds to provoke thought. We will revisit all of this again shortly and augment with newfound content (the currently running openSAP course – Getting Started with SAP Model Company – springs to mind).

As we consider our priorities for S/4HANA phase 2, I’d be keen to learn what value others are hoping to get from their S/4HANA implementations? And on what basis are you prioritising your SAP roadmap? Let me know in the comments below.

This is part 2 of a three-part blog series:

Thank you for the deep drive article Alan Cecchini