Mini adventures with MTAs and the Cloud Foundry CLI

A few more small adventures using the cf command line client, as well as some shell pipeline goodness and that nifty tip from Marius Obert about radically reducing the size of your deployment archive.

Along the way I tweaked a couple of existing command pipelines to display the lists of services and apps on Cloud Foundry (CF), and tried out Marius Obert ‘s great tip on reducing the size of your deployment archive.

If you’re like me, and want — (in the immortal words of Boycie in the Only Fools And Horses episode “Chain Gang”) — to “let the dog see the rabbit” to see what this is all about, you can watch this little Asciinema recording of what I describe in the rest of this post.

Still around and want the nitty-gritty? Read on!

The app and supporting services

The Business Rules Editor runs in a space in my CF org connected to my SAP Cloud Platform (SCP) trial subaccount. There’s the app itself (which is actually just an approuter fronting the actual editor app artifacts) named “businessruleseditor_appRouter”.

This app is bound to service instances, thus:

Checking the running app and services

At the start, the app is running, along with the bound services. I check this with the ‘cf’ command line client, combined with a bit of shell pipeline to massage the output. The output from ‘cf’ is relatively messy and harder than it should be to parse (yes, there’s the ‘cf curl’ approach but that’s a sledgehammer solution to a problem that should be addressed with better text-based output), so I have to pass it through some classic Unix command line tools to get what I want.

For parsing and displaying service information, I have a small shell script ‘service_status’, which looks like this:

This runs the ‘cf s’ command to retrieve the service information. The output from ‘cf s’ looks like this:

You might think that looks quite neat, but don’t be deceived – if there are no bound apps, the column is empty, which makes parsing of the output more unpredictable that it should be (why can’t something like ‘none’ be emitted for this column so it has a consistent value?). Moreover, the contents of the column showing the last operation is also unpredictable, in that the value or values can contain spaces, which makes text-based parsing harder than it should be.

Anyway, before I go on a mini-rant about this, let me explain what I do to reduce this output down to the essentials.

The second line of the ‘service_status’ script removes any line that is simply ‘OK’. When retrieving the app information (with ‘cf a’) you get an ‘OK’, but when retrieving service information, you don’t. Again, unpredictable. So let’s just get rid of it anyway.

The third line uses the venerable awk language to print the first column of the actual output, which is a single value on each line (in this case ‘businessrules’, ‘businessrules_uaa’ and ‘businessruleseditor_html5_repo_runtime’). With ‘NR>3’ it skips over the first three lines of output so that only the actual service lines are processed.

Finally, the last line uses awk again to strip spaces from the start and end of the lines.

So running this script produces this output:

This is much nicer and what I want for a display in my terminal. Note that I take advantage of the poor formatting from the output of ‘cf s’ by (inadvertently) grabbing the value of the ‘bound apps’ column if it contains values. This is what the output looks like when the services have just been created but before they’ve been bound to the ‘businessruleseditor_appRouter’ app:

I have another script to display the apps information, called ‘app_status’, which looks very similar:

There’s just a bit of difference in the main awk invocation – I simply want to print the first and second columns, on separate lines. Here’s what the output looks like when the ‘businessruleseditor_appRouter’ app is running:

I use the terminal multiplexor app ‘tmux‘ to manage individual windows and panes (sub-windows) in my terminal, and divide up the space to show the output of my ‘service_status’ and ‘app_status’ scripts in separate areas. The output is always up-to-date as I drive the execution of these scripts with the excellent ‘watch‘ command, which by default will re-execute the specified script every 2 seconds. 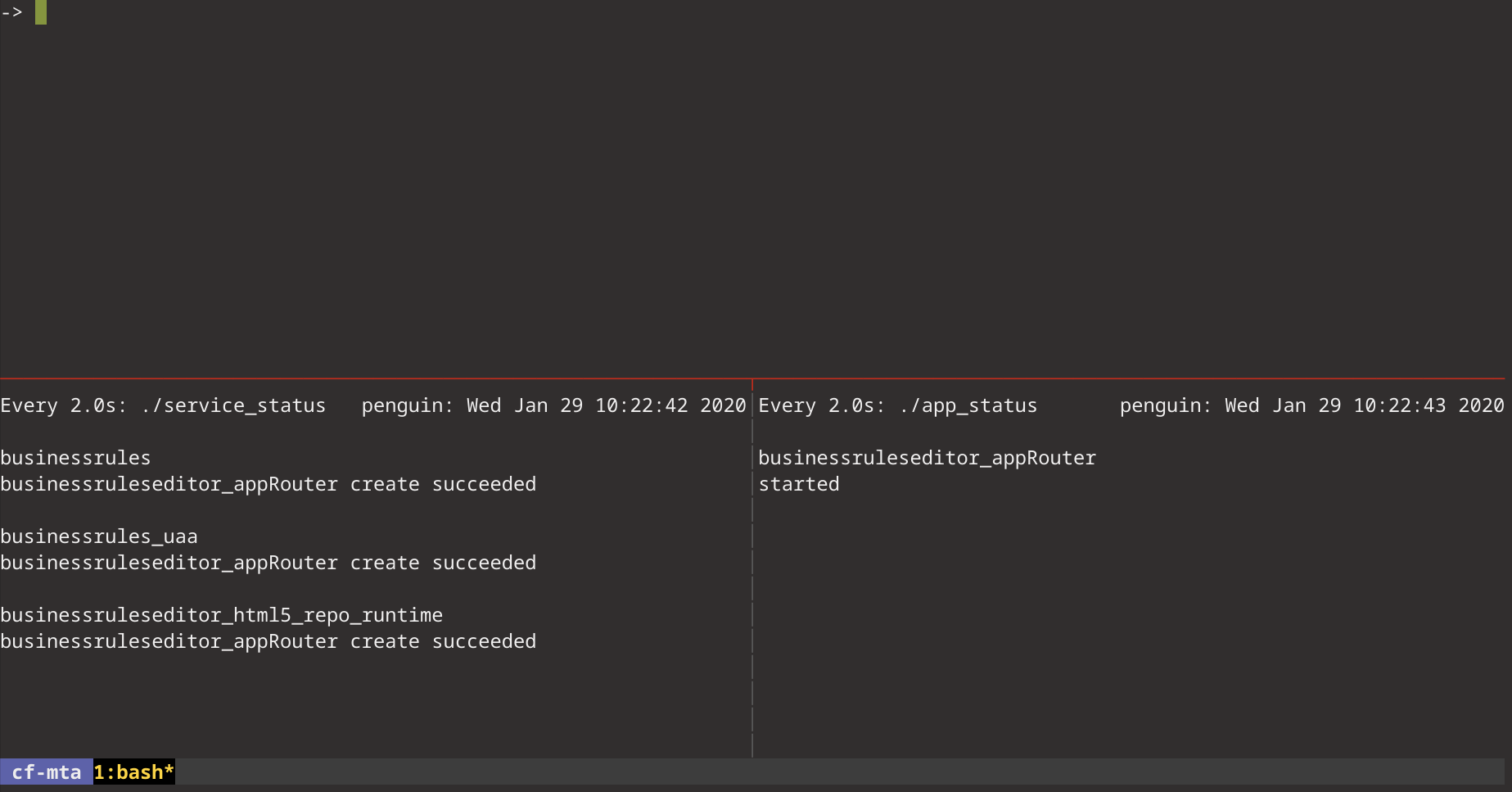 Removing the app and supporting services

I wanted to remove the running app and the services it was bound directly to, i.e. the ‘businessrules_uaa’ and ‘businessruleseditor_html5_repo_runtime’ services’. Of course, I could have simply used a combination of the ‘cf delete’ and ‘cf delete-service’ commands (‘cf d’ and ‘cf ds’ in short form). But there’s a neater way, with ‘cf undeploy‘.

The ‘cf undeploy’ command requires the MTA ID, which can be retrieved with the ‘cf mtas’ command, which shows output like this:

In this case, the ID is ‘businessruleseditor’.

Now I can use the ‘cf undeploy’, along with the ‘-delete-services’ option, to clean out exactly the right parts, in the right order, too. If there’s any issue with deleting services, there’s a number of times the operation will be retried, too:

When I’m ready to redeploy I can do so, following the flow I described in yesterday’s post “Scripting Cloud Foundry activities in trial“.

However, there’s a lovely bit of advice from my friend and colleague Marius Obert that can be used to reduce the size of the MTA deployment archive. Shown in a Gist, there’s a ‘build-parameters’ setting that can be added to a module definition, so that the ‘node_modules/’ directory, which is often the bulk of the archive, can be omitted (it will be created in the cloud once deployed). This is what the parameter looks like:

Adding this to the definition of the ‘businessruleseditor_appRouter’ module (effectively the definition for the app itself) like this, reduces the archive file size from

Without this setting, the size of the ‘businessruleseditor_0.0.1.mtar’ archive is 12 megabytes:

With this setting, the size is only 17 kilobytes!

As a bonus, the build is slightly quicker, and the deploy is definitely quicker!

Take a look at the Asciinema recording (above) to see this in action – where you can also see the appearance of the binding information in the service output, as the app is created and bindings are made.

When I started hacking around with the ‘cf’ command earlier this morning, I didn’t intend to write a blog post, but I thought it was worthwhile in the end to share some of my learnings. I hope you found it interesting – and more importantly, I’d love to know what sort of automation and convenience tools you have set up for yourself. Let me know in the comments. And as always, happy hacking!

I agree the output for the CF commands is hard to parse. I'm also not too happy about the way they print URLs (without the protocol)