git checkout -b “2020” — A small retrospective and the road ahead

It is a new year, and this year we’re also entering a new decade. What is better than using this time to reflect of what has been, and look ahead to where the journey might take us forwards? Thank you to Elena Lucarelli for triggering this for me. I hope this is an accepted contribution, even though it might take another form than others. I’m still trying to hack this writing thing. ☺️

I would also like to send a thank you to all the others in the community that has contributed with their inspiring takes on this topic. Some of them are Marius Obert, Witalij Rudnicki, Phil Cooley, and DJ Adams. Don’t forget to go back and check out their blog posts, there are some real gems in there.

This decade has been extremely formative for me. It started with me literally going to war, with my 4th deployment to Afghanistan, and just before that meeting the love of my life. These two events combined started a big shift in how I view life and how I arrange my priorities, and it was also one of the deciding factors that made me start to look for a different path in my career. Then we got our first child in 2012, followed by boy #2 in 2014, leading up to the gigantic change that happened in 2015, when I left the army after 15 years and had the chance to start fresh as a software developer.

There is one thing that can be said for certain; the last 4.5 years has been wild, with 2019 turning into near unbelievable! We arranged a successful SAP Inside Track in Oslo(you should check out the sessions on YouTube), and then my proposed presentations for TechEd Barcelona got accepted. I switched jobs i september, and then the year ended with me having the honour to become a SAP Champion. I’m extremely privileged to have gotten all these chances, and I have jumped into all the challenge with both feet. But this has had some unfortunate consequences. I’ve come to the realization that I’ve stretched myself to the limit over these years, and that it is time to make this a bit more sustainable.

When I sat down to reflect on where I’ve been, and where I want to go, two word stood out to me. Focus, and balance. My challenge has primarily been that there is to much to do, and to little time to do it in. The combination of an unhealthy nörd curiosity, and the struggle to say no when someone ask for my time, has made an interesting cocktail. My solution to this, up until now, has been to double down on everything. But this can’t continue, and 2020 has started with my most important project of the year; find a better way to develop a more sustainable me.

But enough about this. I’ll get to the point now, and present my list of work related learning for 2020. I’m also including a couple of link lists at the end, for easy reference.

My dedication to OpenUI5(SAPUI5) and Fiori won’t go anywhere, but this is the year where I really set focus on SAP Cloud Platform. There are a few areas in particular I would like to expand upon.

Up until now I’ve primarily worked with the NEO environment, but now it’s time to move on. I particular I’m looking forward to working with UI5 in a Cloud Foundry context, and hopefully get started with testing, automation, and CI/CD. I attended a session about Project Piper at TechEd, and it’s definitely on my list.

One thing I really look forward to, is the openSAP course on the Cloud Application Programming Model, starting later this spring. This and the SAP Cloud Platform Extension Factory, will hopefully show itself very useful, now that we’re starting to look at extending S/4HANA Cloud on SAP Cloud Platform. SAP even put out their serverless FaaS offering in GA recently. There is never a bad time to learn some back-end technology, and the playing field just got more interesting.

It is also time to get my first certification, if not for any other reason than to break thing up a bit. So I’m setting my eyes on the learning journey “SAP Cloud Platform – Certification Path”, and hope I’ll manage to grab the two certification through the year. Fingers crossed.

The first point on this list is probably TypeScript. I’ve been pushing it in front of me through the whole of 2019, but now it’s time to pick up the ball.

Which leads me up to a couple of front-end frameworks, where at least one depends heavily on TypeScript. I’ve been looking at Vue.js earlier, and want to pick that up again. And I would also like to have a look at Angular, to get some perspective into another big framework.

In this context I also look forward to keep exploring the new UI5 Web components. I already use it with Vue.js on the landing page for the “OpenUI5 Latest Version – Community API”, and it’s a cool new addition to the family.

Other things on the side.

I won’t go into my personal plans, but there are some things that live in that grey area between work and personal. And one of those things is the SAP Community.

There is already a planned SAP CodeJam in Oslo on February 5th, and we plan to arrange the first SAP Stammtisch of the year in the aftermath of that. Next up, we will soon get together and set the date for SAP Inside Track 2020. Yes, we are doing it again, and we’re planning to have an equally successful day as last year.

I’m hoping that I’ll have the chance to attend UI5con this year, and if there will be SAP Community talks at TechEd, I need to get my act together and submit something for that too. TechEd Barcelona was really one of the biggest highlights of 2019 for me.

There are still lots of stuff I would like to spend my time on in 2020, but with the admission that we all have a finite number of hours each day, this is were my professional focus will be this year. And by keeping it this “limited”, I hope to achieve the balance I need.

I’ll leave my personal plans a mystery for now, and also what tools I plan to use. I guess it will inevitably leak out in a tweet or something, for those who might have some interest in that. Or perhaps in a later blog post.

Who knows? 2020 might be the year where I learn to stop worrying, and just write.

I ❤️ openSAP! openSAP has enabled me like few others in the SAP space, when it comes to structured learning of new SAP technology. And I will keep on using them in 2020. If you haven’t checked them out before, I urge you to head on over there.

Some courses I think are worth checking out(I bet the CAP course will be amazing, when it comes out):

Thanks Ronnie André Bjørvik Sletta for the callout and for someone not comfortable with writing you sure smashed it out with this. Really interesting read - especially with your signature GIF's added in for extra entertainment. 🙂 Great list of openSAP courses and some of your 2020 item are also on mine so let's help each other get through them!

Thanks for sharing this mate, well done!

Thanks Phil. You're the one that triggered the certification idea. The golden path is put into a list, and I'm ready to start tackling it. Got a freebie too,since I took the SCP essentials course last year. ? 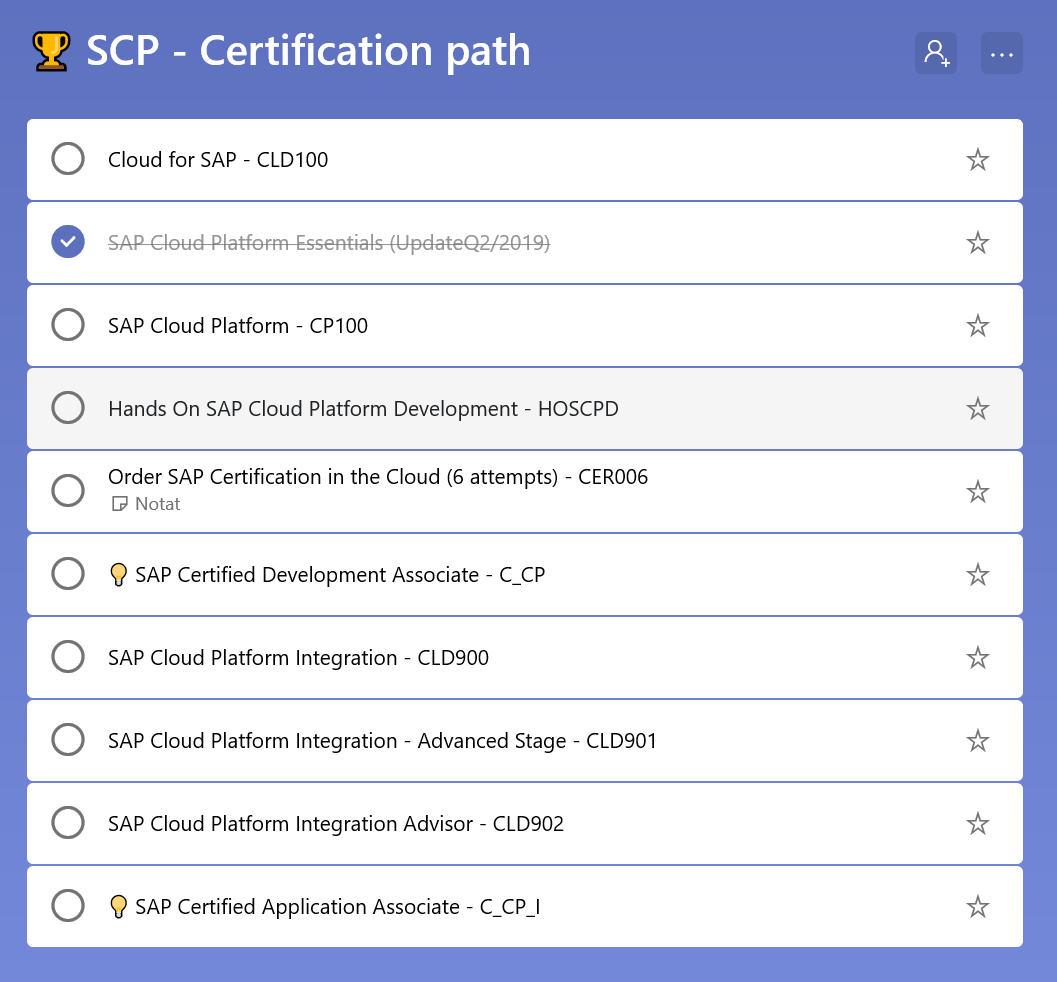 This is seriously cool Ronnie André Bjørvik Sletta so I am going to do the same thing to track my progress. I too did the SCP Essentials course but even though I work in SCP on a daily basis I will revisit this for any nuggets I need to work through. Should be good though.

Not sure if I will do the CPI one although would be good to know more in this area as I am already using this in current projects so will be handy to know and get certified in.

Lastly, have you got a timeframe in mind (not to be pushy) but just wondered. January is gone already!! 🙂 I'm thinking realistically if I can get my SCP one by Easter that would be good progress - earlier would be a bonus!

Nice one Ronnie, great post. Looking forward to hearing more about your learnings in 2020!

Thanks DJ. I'm sure I'll keep everyone updated on my journey. I'm unable to keep quiet. ?

This blog is super Ronnie! I bet many other will find it really helpful 🙂 Thanks for taking the time to do this.

Great and inspiring post Ronnie, these all posts actually help us in deciding what we must learn this year:)

Thanks Nabheet. The most interesting part, will be the retrospective in December, to see how the plans turned out. ?