SAP Trends of the 2010s – Buzzwords or Sustainable Innovations?

The years 2010-2019 have been an amazing success for SAP. The revenue has almost doubled. The stock price has more than tripled. It is fair to assume that SAP has done some things right in this decade, although the impact of the positive macroeconomic environment should not be underestimated. But what is it exactly that SAP has done right? One innovation in the SAP environment followed the other in this decade, and in this ever-accelerating world it is hard to judge which innovations are actually providing the most value for SAP and its customers.

A simple method to make this judgement is to take the assumption that value is created when interest is raised. No matter if you consider buying something, do some research on something, or want to find out more information on something that your peers have bought or are considering buying – you are interested in it. This means that measuring the interest in a certain innovation might be a good indicator for the value it can provide. But how to measure interest?

Luckily, this is quite easy in today’s digital “winner-takes-it-all” world. What are the analysts, the software buyers, the industry thought leaders, the IT experts, and your competitors doing when they think an innovation is interesting? Check, nowadays everybody googles it. And, luckily again, measuring how often a certain term or topic is googled is very simple with the publicly available Google Trends website which analyzes the popularity of search queries in Google Search. Using this simple but powerful method, this article provides answers to the question which trends are actual value-creating innovations and which ones turned out to be not much more than buzzwords.

Note: All data used in this blog entry was pulled from Google Trends on 16th December 2019. Google Trends can be accessed here: https://trends.google.com/trends/. From there, I exported it to CSV format and created the charts in Microsoft Excel. For more detailed explanation how the data was consolidated, please contact me directly.

Three of the eight analyzed trends (SAP HANA, SAP Fiori, the cloud solutions SAP SuccessFactors, SAP Concur, SAP Fieldglass, SAP Hybris, and SAP Ariba) can already be considered as sustainable innovations in this decade and look like to continue to raise interest in the 2020s as well.

Another three trends (SAP Cloud Platform, SAP C/4HANA, Qualtrics) are still perceived as buzzwords in the SAP environment in this decade, but the future looks promising for them to become the next sustainable innovations, carrying SAP through at least the first half of the 2020s.

Two trends (Cloud Foundry, SAP Leonardo) were mostly considered as buzzwords rather than innovations in the 2010s, and interest in them does not look like it’ll be skyrocketing in the next decade.

All in all, the majority of what SAP marketed as innovations in the 2010s turned out to be real innovations, either by already proving it in this decade or by having everything it needs to become a sustainable innovation in the 2020s. This might be one of many reasons why the 2010s were such a successful decade for SAP. SAP HANA is a comprehensive platform that combines a robust database with services for creating innovative applications. It enables real-time business by converging transactions and analytics on one in-memory platform. Running on premise or in the cloud, SAP HANA untangles IT complexity and democratizes in-memory computing, bringing huge savings in data management and empowering decision-makers everywhere with new insight and predictive power.

Interest in SAP HANA has constantly risen between its introduction in 2010 and 2017 and maintains a high level of interest since then.

As the SAP HANA platform was built as the foundation of so many more innovations in the 2010s, it is not surprising that interest in it is still on the same level after it reached its peak two and a half years ago. Even though it is more than a database management system, a DBMS is what it is at its core. The fact that interest in DBMS and in SAP HANA has more or less been stable for the last three years shows the maturity of SAP HANA, indicating that this innovation is accepted and provided value for SAP and its customers through the whole decade. Not only by itself, but as well by its strong tie to other innovations like SAP S/4HANA, SAP C/4HANA or the SAP Cloud Platform (which was originally named HANA Cloud Platform). Even in 2019, there are still people (inside and outside of SAP) who cannot actually tell the difference between SAP HANA and SAP S/4HANA. This is another hint on how valuable SAP HANA is for SAP. Who would have thought that a database platform almost becomes indistinguishable to what has always been SAP’s flagship solution – Enterprise Resource Planning?

SAP Fiori is a user experience framework containing a set of design principles that have been brought and adopted into various enterprise systems, such as SAP S/4HANA, SAP C/4HANA, and more.

The steady rise in interest in SAP Fiori is remarkable considering SAP’s user experience history. SAP’s customers are delivering the SAP Fiori to their end users more and more. The constant growth in interest hasn’t come to any stop yet (unlike SAP HANA), which indicates that one can expect even more from SAP Fiori in the next decade. SAP still is often associated with the SAP GUI user interface. As long as this is the case, and as long as SAP does not lose focus on the importance of the topic, SAP Fiori is about to become even more valuable in the next decade. The interest in a best-in-class user experience does not look like it will be declining soon either.

Interest in SAP Cloud Platform grew steadily between 2013 and 2017. Since then, it stays on the same level as interest in Cloud Computing in general increased slowly. 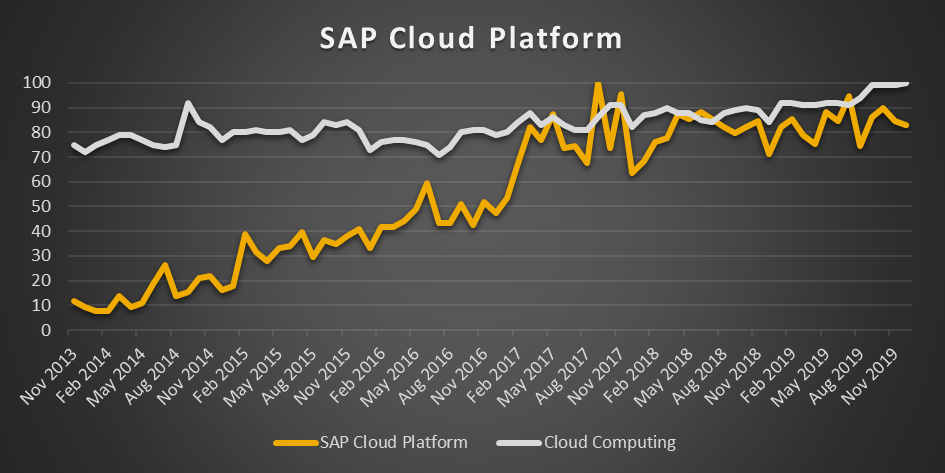 Interest in the SAP Cloud Platform hasn’t declined and has only been slightly outperformed by general interest in Cloud Computing for the last two years. Its integration services and extension services are crucial functionalities in every modern, SAP-centered business system landscapes. Hence the value it provides for SAP and its customers has been high for those companies already building these modern SAP-centered business system landscapes in the 2010s. Those who will do so in the 2020s (which is arguably the majority) can look forward to profit from this value as well.

As we have already seen in the previous chart, the SAP Cloud Platform looks like a sustainable trend generating value for SAP in the 2010s and 2020s. In contrast, the declining interest in Cloud Foundry shows that establishing another trend which is closely related to the SAP Cloud Platform was not successful. Customers want to have one seamlessly integrated platform in the cloud which is capable of everything a cloud platform must do in order to integrate and extend SAP software in the cloud. Differentiating environments and marketing activities between Neo and Cloud Foundry does not look like something SAP might be generating value with in the coming decade. But don’t take me wrong, this does not mean that the technological capabilities of Cloud Foundry per se won’t play a huge role in the 2020s.

With cloud solutions from SAP, in the following the solutions by five companies acquired by SAP between 2012 and 2014 are described: SAP SuccessFactors, SAP Concur, SAP Fieldglass, SAP Hybris, and SAP Ariba.

Interest in the cloud solutions from SAP acquired by SAP between 2012 and 2014 correlates very well with general interest in Cloud Computing. 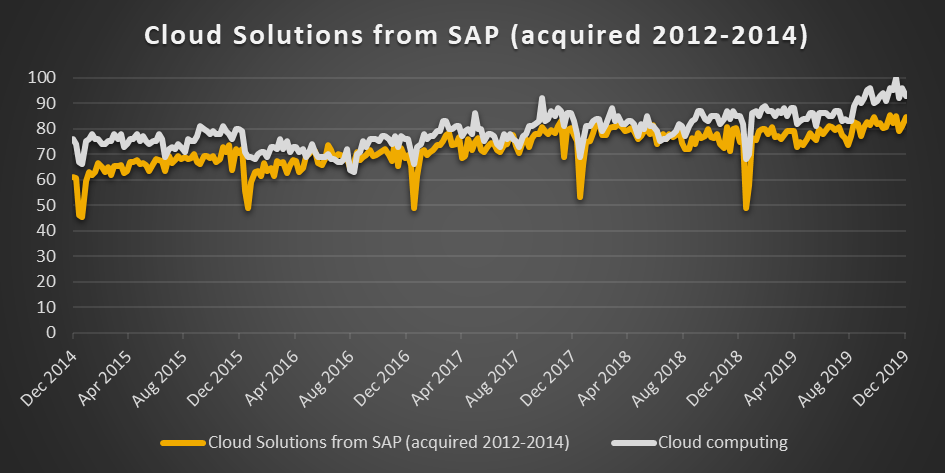 The level of correlation is so high that it might be fair to assume that SAP has reached its goal of becoming (and being seen as) “the Cloud Company” in the last decade. The slowly, but constantly rising interest in SAP’s cloud solutions give a hint that the (often criticized) acquisition strategy was successful, at least from this perspective.

Interest in SAP Leonardo skyrocketed shortly after its introduction in 2017. But since Q3 2018, it has decreased, while interest in the underlying technologies stayed on the same level.

The bold move to put many different technologies, of which each of them itself is associated with a huge disruptive potential in the coming years, on the market under the rather nondescript term “Leonardo” turns out to be a marketing flop considering the declining interest. One of the biggest challenges in the 2020s for SAP will be to limit the damage to a marketing-only damage and gain momentum in the actual implementation of solutions involving the intelligent technologies. And to do so not only in shiny show case projects, but also on product side and consequently as common service delivery projects. But as of 2019, e.g. SAP Leonardo IoT still has long way to go considering market reputation. SAP is not even listed in the Gartner Magic Quadrant for Industrial Internet of Things 2019, while other software-only companies (PTC and Software AG) are leading.

SAP C/4HANA is a solution portfolio consisting of five cloud solutions based on what was previously known as hybris, CallidusCloud, Gigya, and CoreSystems. Together with the SAP C/4HANA Foundation, they build SAP’s customer experience suite. 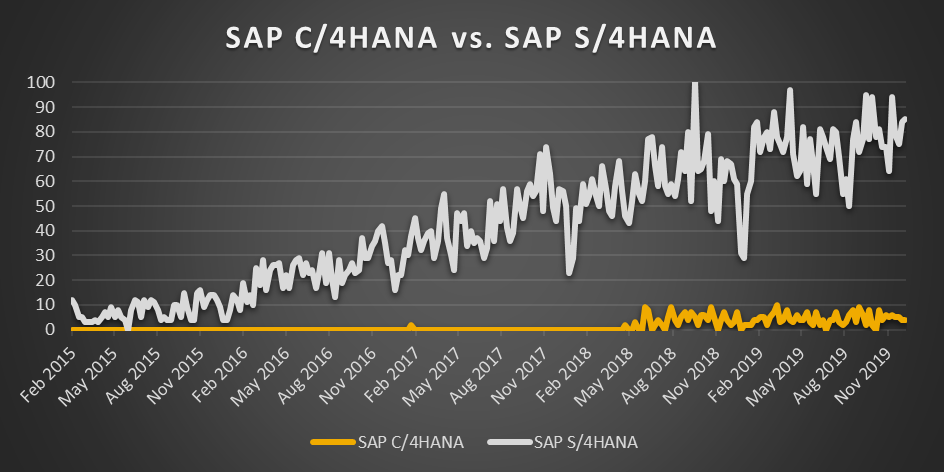 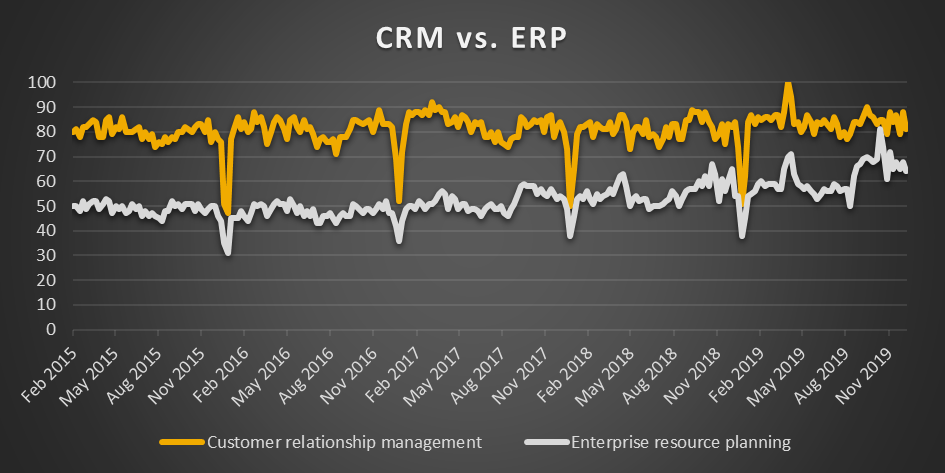 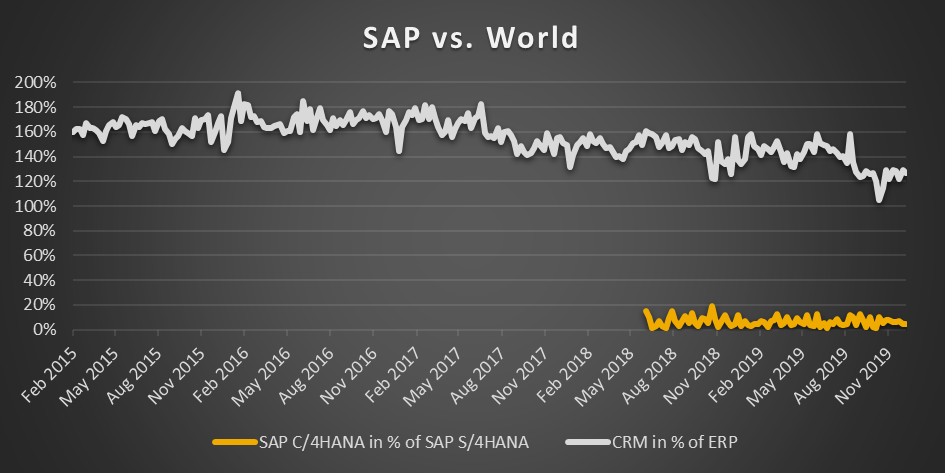 It might be surprising that ERP is closing the gap to CRM when it comes to general interest in the topic, considering the hype around Customer Experience (see also the next chapter). One explanation could be that the term “CRM” is starting to be considered as antiquated. SAP has been working hard in the last years to be recognized as a CRM leader, next to its everlasting perception as an ERP company. Until now, considering the interest in SAP C/4HANA compared to SAP S/4HANA, this strategy has not yet been successful. While CRM has always been as much of interest as ERP in the last five years, in the SAP world interest in SAP C/4HANA never exceeded a fifth of the interest in SAP S/4HANA. One reason for that might be found in the next chapter. If SAP can manage to make the move to be perceived as a CRM company, this 2010s buzzword can still become a sustainable innovation in the next decade.

Qualtrics is the global pioneer of the experience management (XM) software category that enables organizations to thrive in today’s experience economy. With its acquisition in 2018, SAP is looking to create value by combining Qualtrics’ experience data with operational data from SAP software to power the economy.

The steady rise in interest in Customer Experience shows how huge this trend has been in the 2010s. The very high level of correlation with interest in Qualtrics fits well to the analysis that Qualtrics not only participated, but also shaped the rise of Customer Experience. The graph does not indicate that any plateau has been reached yet, making the future of Qualtrics look very promising for the 2020s.

Interest in Qualtrics is significantly lower in the Christmas and Summer Holiday season. So, don’t feel bad when you take some time off and don’t care about any SAP innovations, trends or products when you are off work – apparently that’s what most people do.