Recently, I have worked on configuring IBM’s Virtual Persistent Memory (vPMEM) on POWER9 System for SAP HANA. So I thought of writing this blog to provide more insight on both – Intel and IBM’s persistent memory technology and pen down the steps on how to configure persistent memory on IBM POWER9 Server.

This blog is focused on providing an overview on each persistent memory technology and how HANA as a database enables the use of Persistent Memory.

Intel’s new Persistent Memory called Intel Optane DC Persistent Memory, is a new type of computer storage, combining speeds approaching those of dynamic RAM (DRAM) along with RAM’s byte-by-byte address-ability, plus the permanence of solid-state disks (SSDs). It resides on the memory bus which allows Persistent Memory (PMEM) to have DRAM-like access to data, which means you can achieve almost the same speed with slightly higher latency of DRAM alongside non-volatility of SSDs.

Like conventional RAM, persistent memory is installed directly into motherboard memory slots. As such, it is supplied in the same physical form factor as RAM – as DIMMs. These are known as NVDIMM: non-volatile dual inline memory module or DCPMM: DC Persistent Memory Module. So, your system will have a mixture of both conventional RAM and DCPMM, where operating system and applications will execute in conventional RAM, with the DCPMM providing very fast supplementary storage.

When Intel introduced beta program in 2018 of Intel Optane DC Persistent Memory, it has disclosed its two different operating modes. These modes determine which capabilities of the Intel memory are active and available to software.

When memory mode is used for DCPMM, the application and operating system perceive a pool of volatile memory, no differently than it does today on DRAM-only systems. In this mode, no specific persistent memory programming is required in the applications, and the data will not be saved in the event of a power loss. So existing application will continue to work the way it works today with Optane memory mode like virtualization deployment.

In Memory mode, the DRAM acts as a cache for the most frequently-accessed data, while the Intel Optane DC Persistent Memory provide large memory capacity. Cache management operations are handled by the Intel Xeon Scalable processor’s memory controller. When data is requested from memory, the memory controller first checks the DRAM cache, and if the data is present, the response latency is identical to DRAM. If the data is not in the DRAM cache, it is read from the Intel Optane DC Persistent Memory with slightly longer latency. Applications with consistent data retrieval patterns the memory controller can predict will have a higher cache hit-rate, and should see performance close to all-DRAM configurations, while workloads with highly-random data access over a wide address range may see some performance difference versus DRAM alone. Also, data is volatile in Memory Mode; it will not be saved in the event of power loss.

Persistence is enabled in the second mode, called App Direct which is also a suitable mode for HANA In-Memory database.

So, the question is why use Optane with memory mode, if it’s not persistent?

If you consider the largest DRAM DIMM that is currently available in market is 128 GB, whereas the smallest DCPMM available is 128 GB and goes up to 512 GB and it is also cheaper than the traditional DRAM. Since Optane with memory mode acts just like a traditional DRAM, legacy applications can work seamlessly like virtualized database deployment and big data analytics. This will suffice for the use cases where existing application needs more memory with low TCO.

With App Direct Mode, applications and operating system are explicitly aware that there are two types of direct load/store memory in the platform and can direct which type of data read or write is suitable for DRAM or Intel Optane DC Persistent Memory. So, in order to use mode, your application like Operating System, Virtualization, HANA In-Memory Database should be aware on the usage of DRAM or Intel Optane DC Persistent Memory. 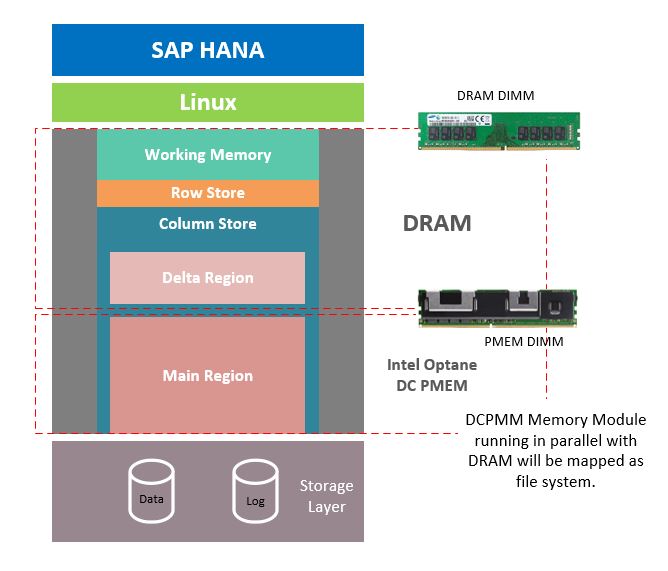 IBM approach for persistent memory is an enhancement in their virtualization platform of Power Systems. So basically, if you have IBM POWER9 System, you can enable the use of Persistent Memory for HANA database.

IBM’s Virtual Persistent Memory is an enhancement in PowerVM that introduces the ability to configure persistent volumes using the existing DRAM technology. Virtual Persistent Memory isn’t a new type of physical memory but is a way to use the PowerVM hypervisor to create persistent memory volumes out of the DRAM that is already installed on the system. This is being made available on existing POWER9 processor-based systems with just a firmware upgrade and that too at no additional costs. 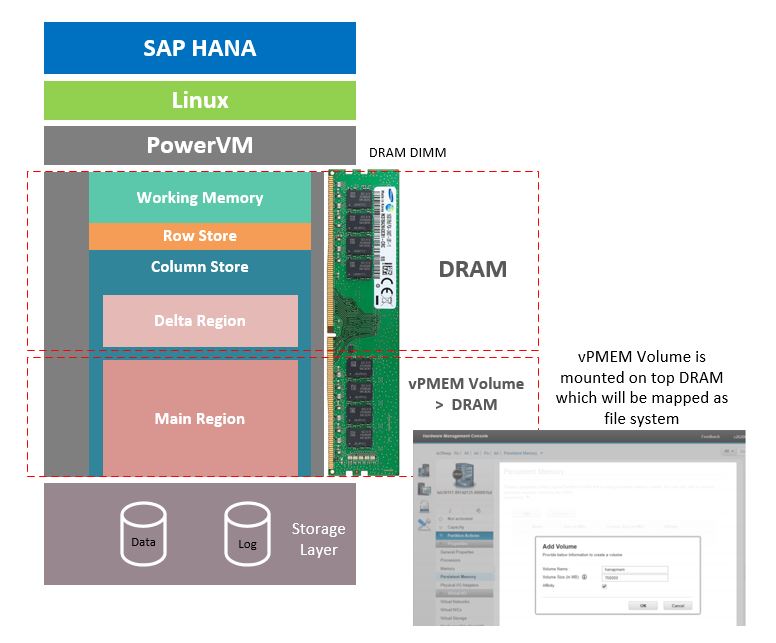 Irrespective of which persistent memory technology you use – Intel’s DCPMM or IBM’s vPMEM, HANA logic of using persistent managed file system remain same. So, in this section I will try to highlight how HANA enable the use of Persistent Memory.

Background: HANA In Memory database keeps all its data in main memory or DRAM. Disk storage is still required to allow restarts in case of power failure and for permanent persistency. The idea behind HANA was to integrate transactional and analytics workload within the same database management system. This is been achieved with columnar engine which exploits modern hardware, compression of database content and maximum parallelization.  In the transactional workload of the SAP Business Applications, more than 80% of all statements are read access. The remaining data write operations consists mainly of inserts, a few updates, and very rare deletes.

HANA’s relational in-memory columnar store is tuned for such enterprise workloads. The trade-off favors the large majority of read accesses through the choice of a columnar database. The performance impact on the row-oriented smaller transactional workload is acceptable due to the fast in-memory access.

HANA compress its columnar store table with extensive compression technique in order to optimize the utilization of available memory. But compression pays off only when the data does not change often (computational effort spent to compress data is leveraged over a longer duration). So, in order to overcome this costly overhead of compression every time data gets changes, HANA columnar tables are divided into two table fragments: Main and Delta. Main Fragments are reader friendly, it contains most of the data and it changes rarely (it uses sorted dictionaries, N-bit and other compression techniques). On the other hand, delta fragments are writer friendly, it contains remaining smaller part of data.

Currently both Main and Delta table fragments are stored in main memory or DRAM. But now with Intel’s DCPMM and IBM’s vPMEM in place, HANA database has been intelligently designed where it identifies the presence of Persistent Memory and stores its Main table fragment of columnar store in DCPMM/vPMEM and Delta fragment, Row Store in DRAM. Now with this persistent memory storage leads to significantly less time loading data from traditional persistent storage into memory. So now HANA doesn’t have to wait for data to be loaded into memory as most of the data is already in the memory. This enables rapid restart and recovery times immediately with full performance benefits of SAP HANA.

As being from Service Industry, I often been asked about the hardware comparison between the two processor – x86 vs ppc64le. So, I usually prepare a table which helps people to understand the technical aspect of the server in terms of no. of CPUs, maximum memory, support of persistent memory, virtualization support etc.

NOTE: Comparison is entirely based on the technical aspect.

For pcc64le Processor, I have considered E950 POWER9 Server and for x864 Processor, 2nd Generation Intel Xeon Scalable Processors (Cascade Lake) 8280M which is released on Q2’19 and support DCPMM.

NOTE: As servers are getting more and more powerful with each new release, above comparison might be different when done in future.

As vPMEM volume is mounted on top of the persistent storage requirement will be followed in the same manner as that of RAM, so the recommended file system size for 8 TB (2 Socket Server) are as follows:

Thanks for a great information in your blog

Great blog! We are doing a performance benchmark testing for PMEM vs DRAM for transactional and analytical workloads. We are seeing that PMEM has higher latency in terms of DB response time and SAP total server response time during read scenarios (used Fiori transactional and analytical apps for Performance testing using  HP Performance center). From what I have read everywhere it looks like this result is in line with higher latency that is expected in a PMEM server compared to a DRAM only server. Can you provide your insights on performance comparisons between PMEM and DRAM?