SAP S/4HANA Cloud provides a test tool that can help customers automate their testing during various phases of the projects and also during Quarterly upgrade. This blog will help you understand what’s new in Test Automation Tool in 2002. 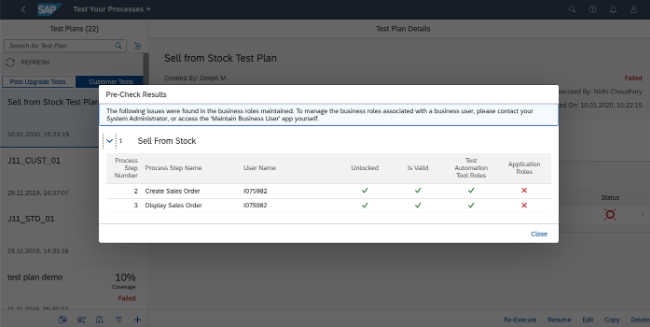 In the last upgrade 1911 we had introduce a new feature of pre checks before the test plan is submitted for execution. This feature would help user to understand basic missing data for a test plan to execute. It provides information of an execution user is locked or not valid and looks for the test automation roles. This check also looks for the application specific roles.

In 2002 this feature is now available for a resume test plan. E.g if there are no issues in initial execution and test plan is failed due to errors. The user would solve those errors and then resume. Meanwhile if the basic details of the execution user is changed for example roles, the pre check report will let the user know once he resume the execution of the test plan and user can take action accordingly.

For more details access the what new in test automation tool 1911. 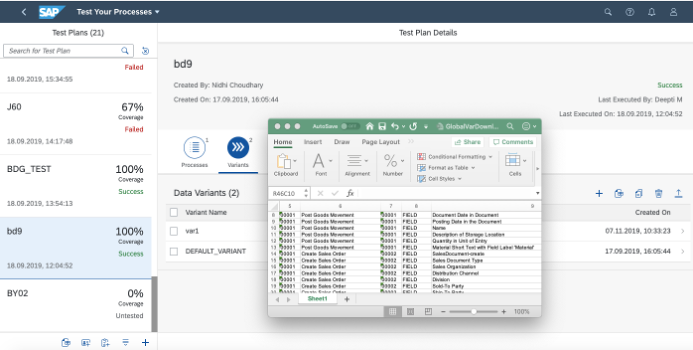 When the test plans are created it gets created with a default variant. User can makes changes in the default variant to test the process with their own data sets. They can also create more variants for testing. If there are large sets of data to be tested, user can utilize the excel features to upload the variants. The performance of the upload excel feature is now improved. 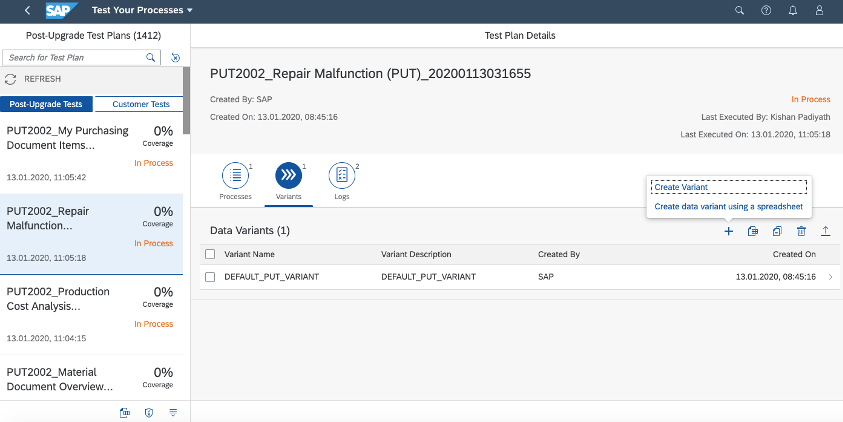 Post Upgrade Tests are smoke tests performed in Q-systems of live customers who has given their consent. The PUT is executed during the upgrade weekend, it creates and executes PUT test plans by picking up the latest transactional data or master data on a run time.

These test automates are standard testing and do not cover end to end scenarios of the best practices. PUT testing does not replaces the regression testing.

Once the post upgrade test is performed user can view all the test plans which got created during the process in “test your process” app. They can also view the data which was picked up during the execution in “Default PUT variant”. Initially if the PUT test plan would fail user could not make any changes in the variant or create a new variant to test. They had to copy the PUT test plan and then execute with variants.

The basic variant feature is now enable for the PUT test plans so that users can updated or create more data variant to test under the tab post upgrade test. This way the originally picked data under default PUT variant can remain unchanged for record purpose.

In 1908 a new feature was introduce to adapt your standard best practice test automate with minimal effort.

For example: the standard automate for procurement for direct materials (J45) starts with the purchase requisition (PR) process. For customer who starts there process with Purchase Order (PO) creation would like to adapt the automate with this requirement i.e. process steps related to PR needs to be deleted from the standard automate.

In two steps you could adapt your process and create a test plans. For more details access the what new in test automation tool 1908.

Formula indicator – we now show an icon “fx” which is interactable and displays the formula (if any) in any action ID of a process step:

When custom automates are created by the recording functionality the actions are recorded on the process step level. The column technical details also gets updated automatically. The technical details shows the fields below

ID: this is a unique identifier for each field. Sometimes due to change in ID of any HTML element, execution might not work. In that case, you can change the ID of control to make it work.

Formula name: You can edit Formula name to create a new or change an existing formula.

For example, if you want to introduce extra waiting time before performing an action, the formula $WAIT can be used by providing time in milliseconds. For ex: $WAIT[3000] will wait for 3 secs before the action is performed.

XPath: Xpath can be used in cases you would like to identify the UI element with an identifier apart from ID or label.

The documentation has been improved further on the SAP fiori apps for the test automation tool which are “test your process”, “manage your test process” and “analyze automated test result”.

Now if the “open help” button is clicked you would notice bubble option on all the buttons and feature. You could click them to know details of the features. The feature also links to the help.sap document if you click on the what’s this app.