Recently I had reason to go back in time and read a set of blogs by Tudor Riscutia on the ABAP BUS screen framework. For those unfamiliar with the framework, the BUS screen framework separates dynpro screen definition from the implementation of screen behaviour using an ABAP object oriented framework.

This blog assumes an elementary knowledge of the BUS screen framework and some experience in working with tabstrip controls in classic dynpro screens. the short introduction above may well be helpful.

To demonstrate the use of tabstrips with the BUS screen framework, I’ll outline the development of a single screen containing a single tabstrip control with three tabs. Each tab reveals a sub-screen. The screen displays a booking from the SFLIGHT model, which I’ve chosen to use because it is distributed with every SAP ABAP system.

For those visual readers – a view of the screen with the booking details shown in three tabs. The customer tab is active. 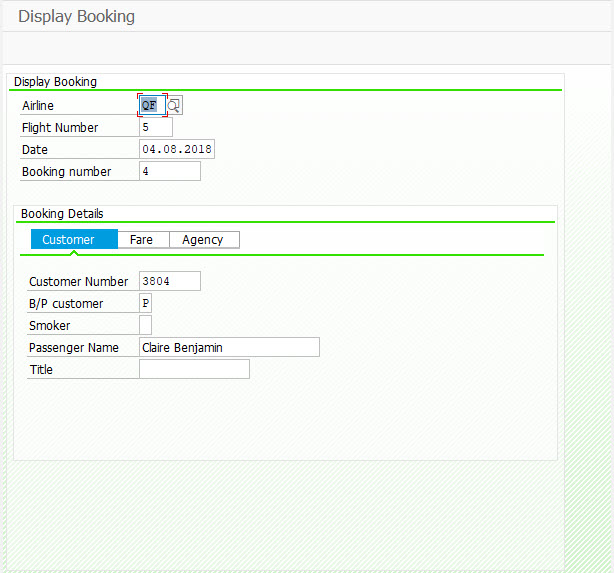 In this example, I’ve defined the main screen as number 0100 with screen behaviour implemented in a local class LCL_0100 inheriting from CL_BUS_ABSTRACT_MAIN_SCREEN.

The 3 sub-screens displayed in the tabstrip area of the main screen I’ve numbered 0101, 0102 and 0103. For simplicity, these screens do not have any behaviour – but if they did, their behaviour would be implemented in local classes ( perhaps LCL_0101, LCL_0102 etc ) inheriting from CL_BUS_ABSTRACT_SUB_SCREEN.

So let’s start with the mechanics of the build.

Consistent with the classical screen programming model, it is necessary to define a tabstrip control as a global definition in the program to which the screens belong.

Having defined the tabstrip control in the program and the BUS related attributes in the screen class LCL_0100, I can now proceed using the graphical screen painter to define the tabstrip in the SAPGUI screen 0100 following the well documented path described in the SAP Help. I’ve chosen to name the subscreen area SUB_0100_01. The structure of the name isn’t important to the framework.

Care does need to be taken when defining the tabstrip and the tabs in the screen painter to ensure that the element names and functions assigned correspond to the BUS related attributes defined in the local class. 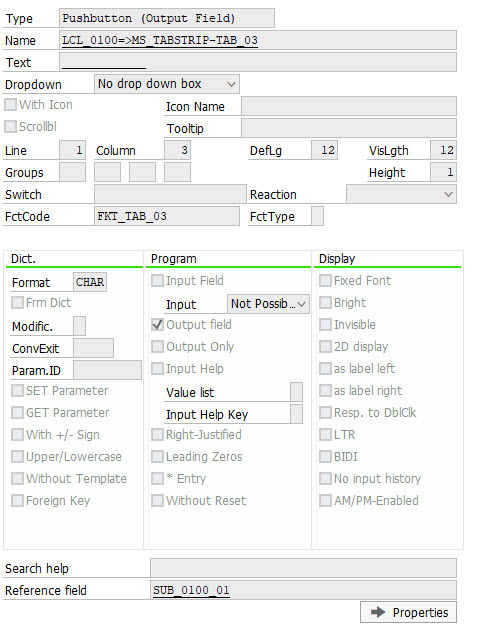 That was a lot of detail, so before I go further, a summary of what has been done.

It is worth reviewing the flow logic of the screen 0100. Note the call of the subscreen and the use of the BUS tabstrip details to specify the subscreen to be called. The called subscreen is dynamically determined at runtime based upon the contents of the ms_tabstrip. I’ll show shortly how that is achieved. 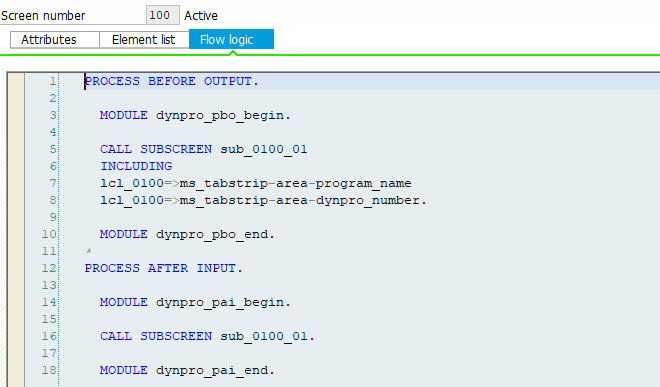 At this stage, I’ve completed the screen definition and now need to consider the implementation of the screen class LCL_0100 to ensure the BUS framework sets up the tabstrip in the PROCESS BEFORE OUTPUT processing of screen 0100.

Having read Tudor’s previous blog, we are aware that the screen modules of the dynpro call the BUS screen framework which in turn interacts with our screen class. Following the approach in Tudor’s blog,  I define screen modules that call the methods of the BUS framework.

The framework method dynpro_pbo_begin calls the method pbo_begin in the screen class LCL_0100. It is in the call of this method, during the pbo of the screen that the tabstrip is added to the BUS framework using the inherited method add_tabstrip.

I’ll leave it to you to discover some of the other methods of class CL_BUS_TABSTRIP_TAB with which the tab can be controlled.

Exhausted? We are almost there! The last remaining framework specific activity necessary to undertake is the handling of the tab functions.

Screen functions in the BUS framework are handled as events. The framework raises an event after all of the PAI processing is completed. The subscribed event handler handles the event and receives the function code to be handled. The event handler could be a method of the screen class or you may of course decide to implement a local controller to handle the events of several screens.

Whatever approach you choose, somewhere you define a method to handle the event below.

You may recall when the tab was defined, each tab was allocated a function. e.g. The 3rd tab was defined in screen painter with the function FKT_TAB_03. When the tab of the 3rd tab is pressed, the function FKT_TAB_03 is triggered. You may also have noticed when the tabstrip was added, using the add_tabstrip method, that the method call was provided a prefix for the tab function code. The prefix in the example was ‘FKT’.  The BUS framework is able to identify tab functions based upon the provided prefix.

So let’s assume the method dispatch is the handler for the event process_after_input. Then tab functions are handled in the BUS framework by calling the dispatch method of the tabstrip, as shown below.

Whilst all this seems to be a lot at first glance, let me list out the steps I’ve taken.

That’s it in a nutshell.

Whilst the code snippets are not fully complete, I believe I’ve outlined the sufficient details needed to get started with using tabs and tabstrips in the BUS framework if you already understand how to use the framework for simpler screens.

For more details, I can point you to the global classes of the package BUS_TOOLS part of the software component SAP_ABA – Application Basis, particularly classes CL_BUS_ABSTRACT_* and CL_BUS_TABSTRIP* . These classes gives an insight into some of the capabilities of the framework not covered here.