Stream on! – A look at how we broadcasted SAP Inside Track OSLO 2019

This blog post has been long awaited, but I hope it still brings some value to the community, as we prepare for the 2020 season of SAP Community events. And I’ll even put in a small tip at the end, that might be of help on the hardware front, if you consider heading down this path.

When we started planning SAP Inside Track 2019, we soon came to the realisation, that we wanted to record the sessions. Mostly, since we feared low turnout. That way, more people could get to enjoy the sessions, and in the long run it might let people know that there is SAP community related activities in the Oslo area. At first we talked about just recording, and publishing to YouTube, but after a little while we decided that we wanted to try to livestream the sessions. Kristian Larsen took it upon himself to get up to speed on how live streamers use their software, and I brought my technical hardware know-how to the table. The rest is history.

Our setup originally consisted of our personal equipment, but we soon discovered that sound was one of the most important areas, and one where we were lacking. Luckily our employer at the time had some audio equipment, as in microphones, that we could borrow. And with the help of another sponsor, we were able to buy a small mixer and some cables. 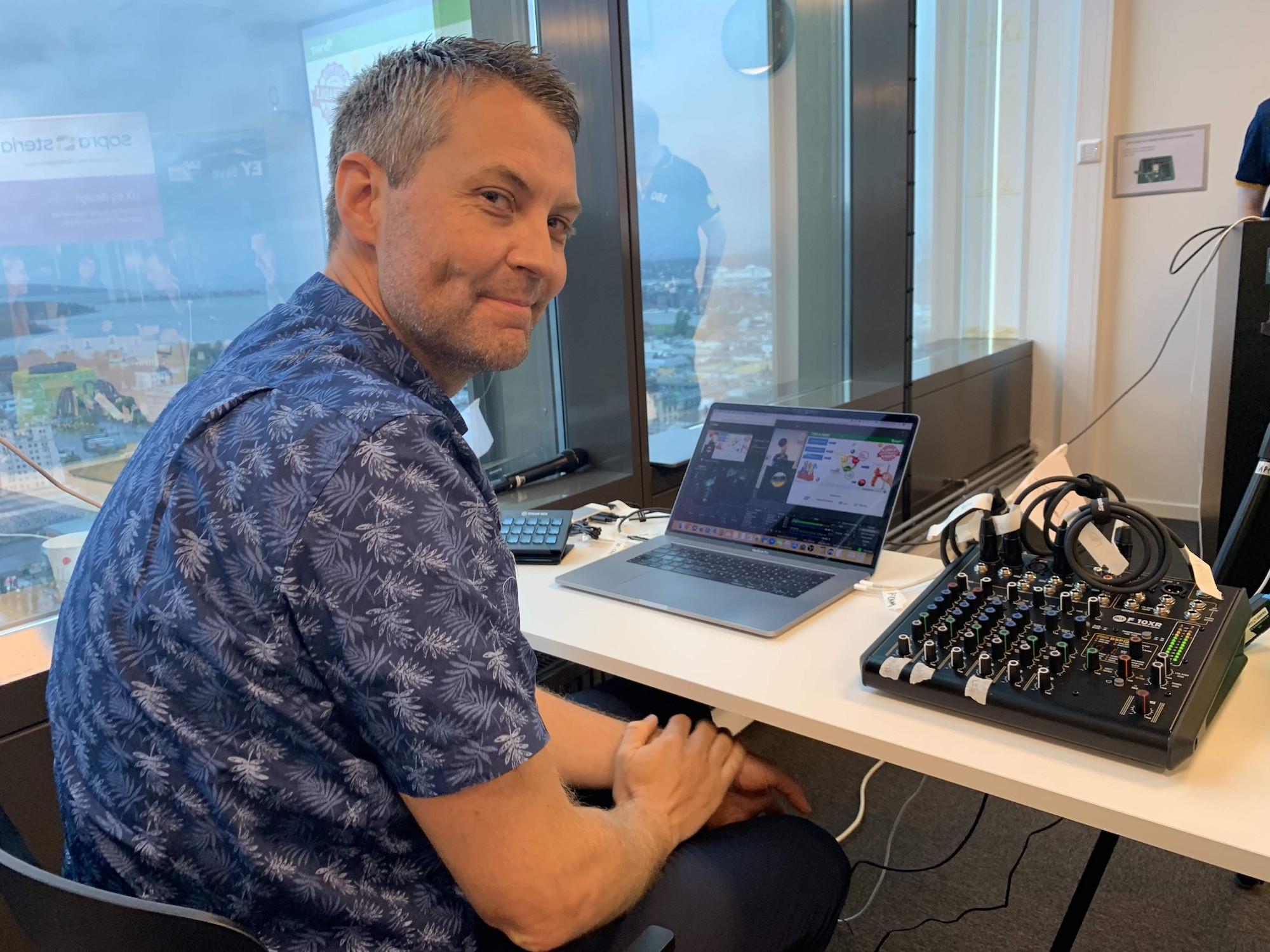 With the MacBook Pro as the main attraction, we connected the iPhones (cameras) directly into it, and the rest of the interfaces through the powered USB hub. The wireless audio receivers are connected to the mixer with balanced XLR cables. We captured the presenters screen with the Elgato Game Capture HD60S, which has passthrough, so we just connected between their computer and projector.

We were connected to the Internet over WiFi, but as this was on a Saturday on a speedy corporate network, this didn’t give us any troubles. Since OBS is the go-to application for live streamers, this was an easy choice for us. Kristian Larsen spent a good few hours, learning how to use it, by checking out blog post and YouTube videos on the subject. He found out that one of the most important things to do, in regards to OBS, was tweaking the video and output settings. This was mostly trial and error, and following tips from others. This is his domain, but these are the setting that worked for us. The only troubles we had, were in the first session, were there are some glitches. 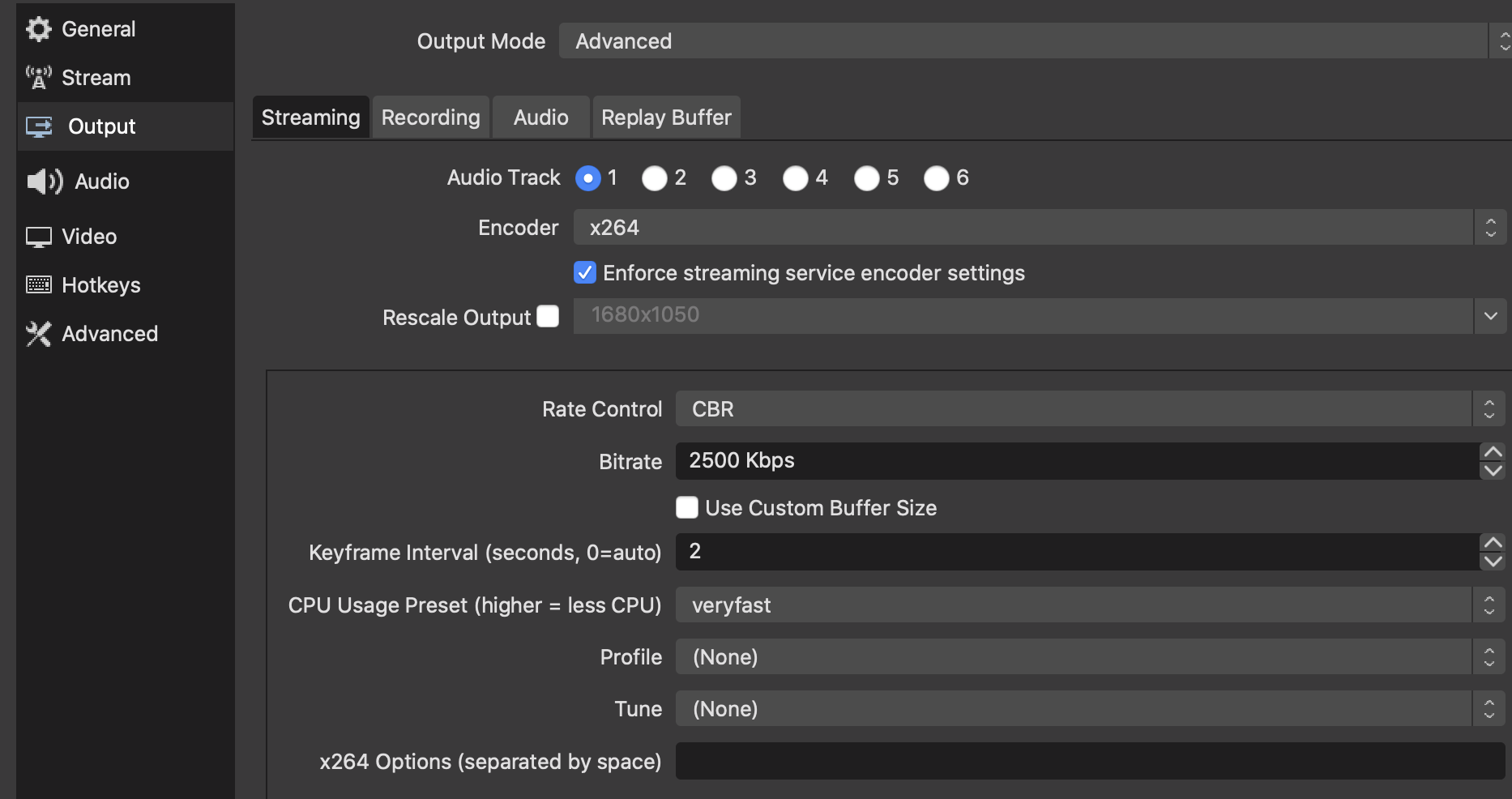 OBS lets you prepare what is called scenes, that can consist of different sources and setups. So we prepared five scenes, and used the Elgato stream deck to transition between them during the stream. That gave Kristian Larsen a manageable job, monitoring the stream and audio, and adjusting in real time.

Thanks to DJ Adams and Malin Liden for letting us record their sessions, giving me the opportunity to use them as examples here.

We used Apple Keynote for the title card, but could just as easily used any other presentation tool, like Microsoft Powerpoint. They are really simple, with just a black background, the sitOSLO 2019 logo, and presenter and name of presentation as the only text. We experimented a bit with proportions, until we found something we liked. From there it was just copy/paste, and changing the text. When finished, we used screen grab to create an image, that was imported into OBS. Quick and easy. This scene used one of the iPhones in portrait mode on the presenter to the side, and the presentation as the main view. Due to aspect ratios, we also got some room for our sponsors under the presentation. We went for a clean look, with white background and discreet logos. 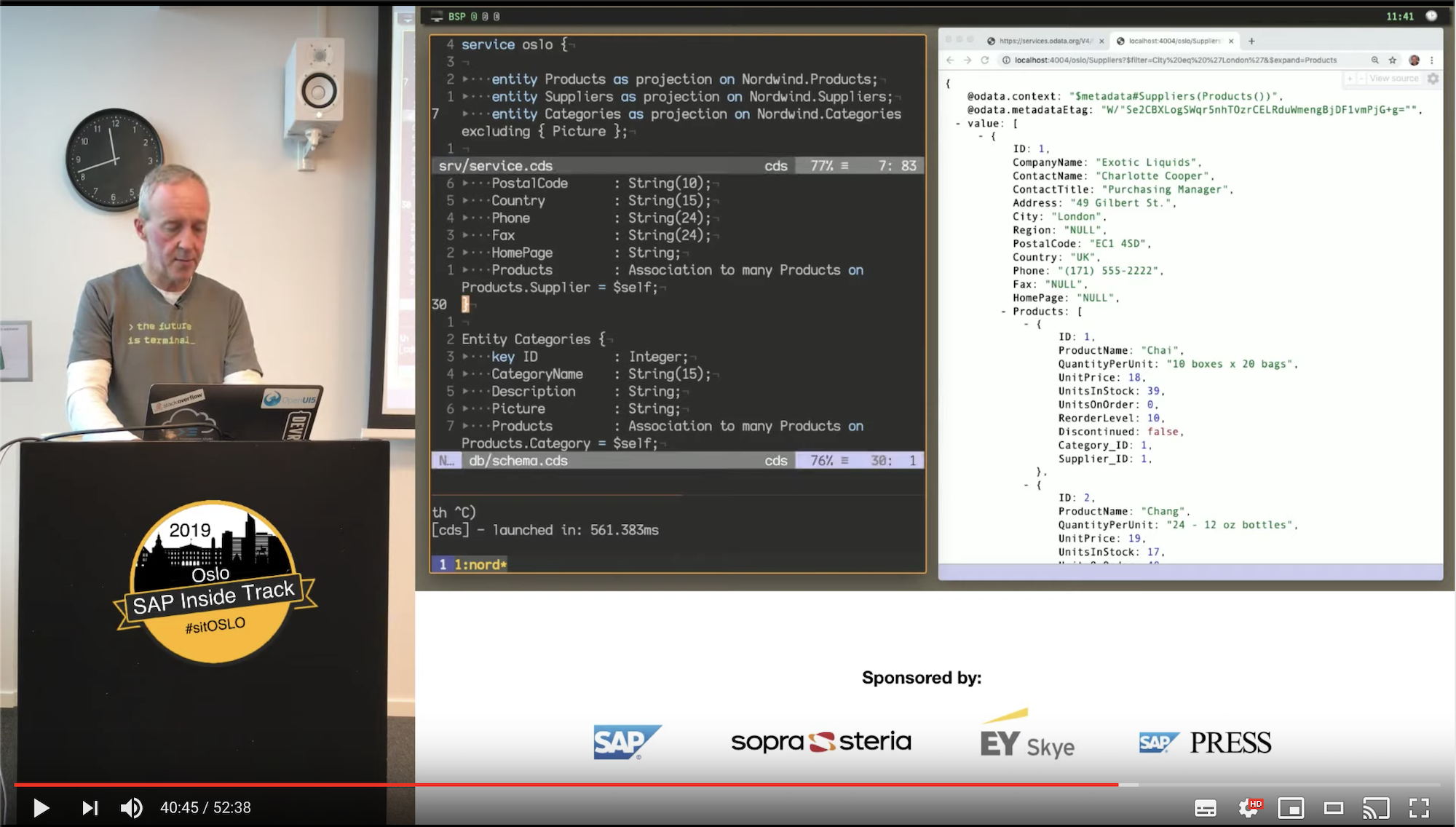 Presentation only was sometimes used, to give full focus to the message on screen, and a change from the two others.

The wide shot used the other iPhone in landscape mode, to capture the whole “stage”, and to give a sense of presence. 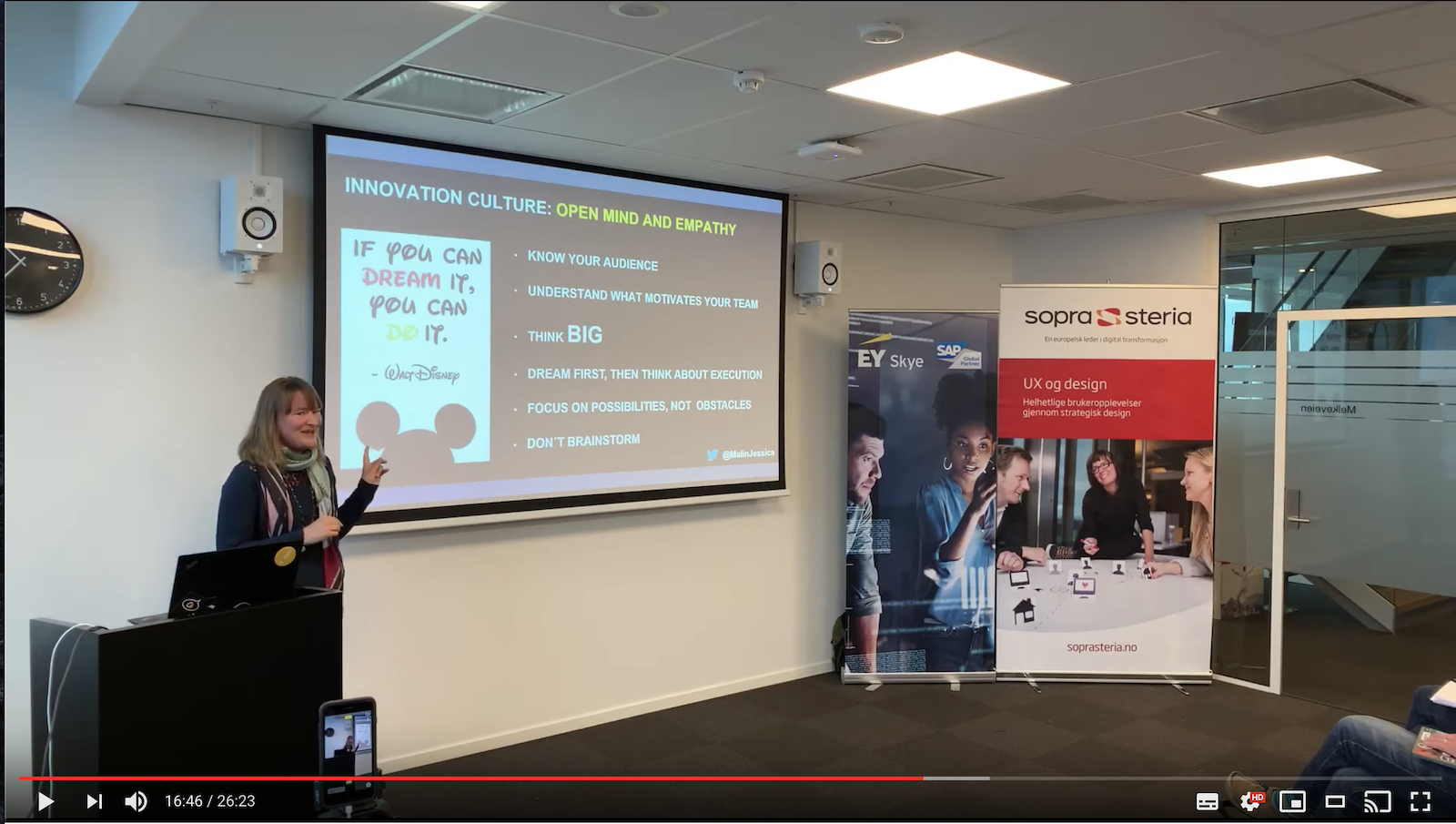 The end card was yet another Apple Keynote production, consisting of the sitOSLO 2019 logo on black background. 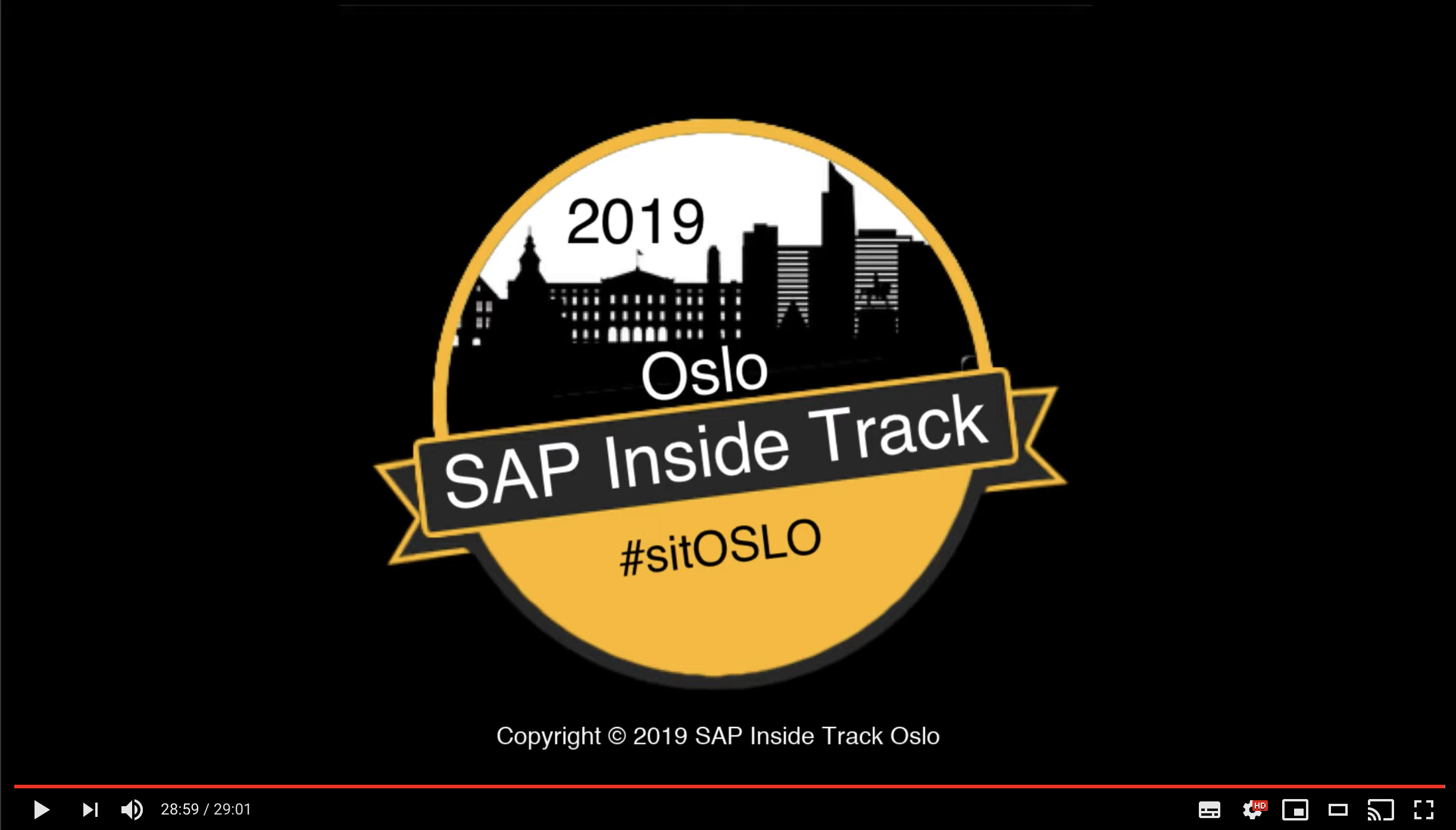 After the event, we could go into our YouTube channel dashboard, to edit the videos and add metadata. We added descriptions to all videos, and trimmed the ends, but other than that we left them as they were. We only used the web based editor, which kept the post-production work to a minimum, and I probably spent only 30-60 minutes on it. We have noticed that some of the recordings are ending prematurely, and have no idea what has happened there. We’ll have to take that into consideration the next time, and see if we might record at the same time as we stream, just to be on the safe side.

In the aftermath I have kept on promoting the videos on Twitter and LinkedIn, using bit.ly to get some stats on it. It seems though, that most of the traffic to the videos are somehow organic. As of today, the stats are pretty good in my view, considering there was around 35 present at the event, organising team included. By streaming and keeping them available on YouTube, we’ve been able to reach many more in total, with a total of over 133 hours of viewing time. The green box shows total views pr session. 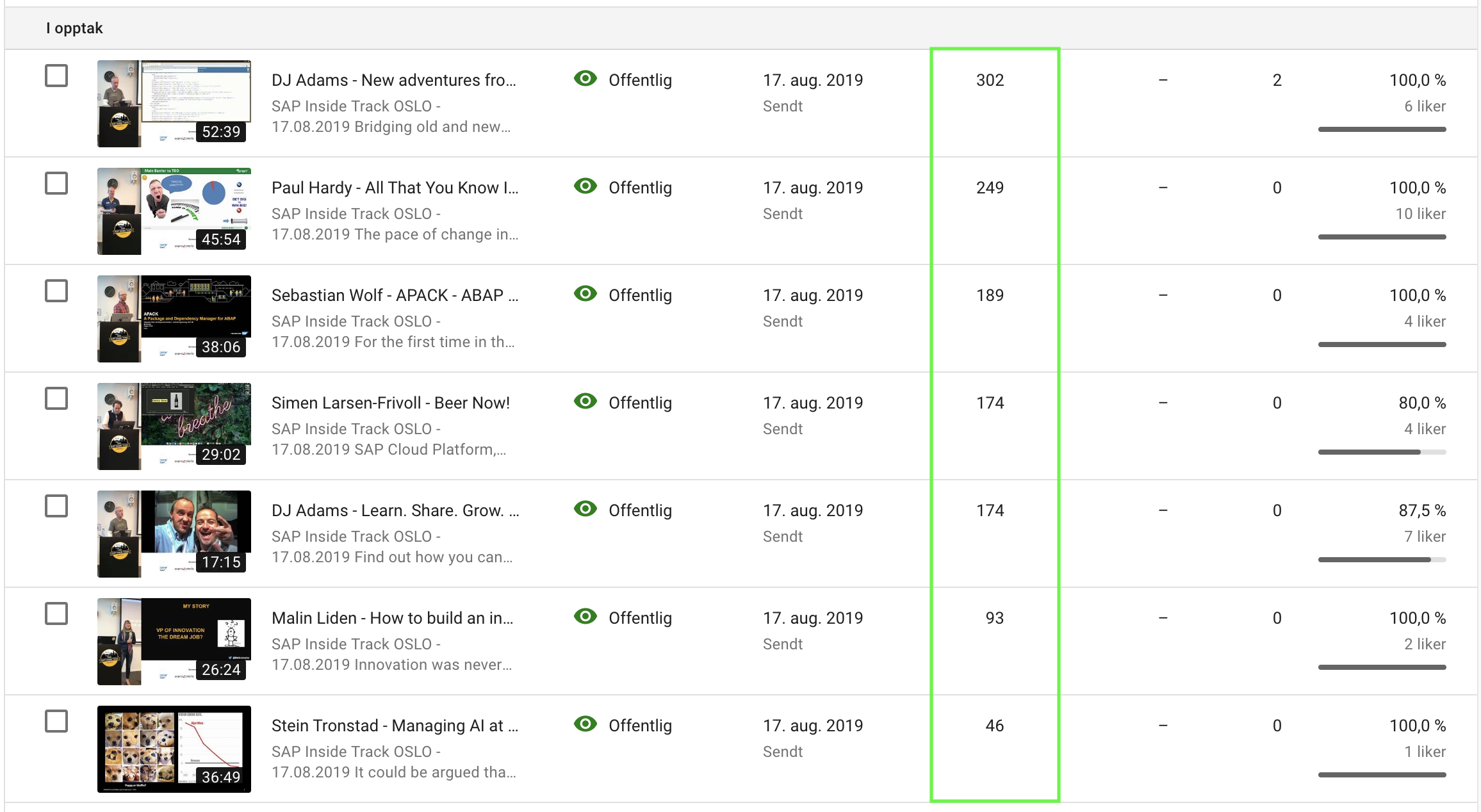 A small tip in the end, that could help on the hardware front

If you work at a company that has employees on different locations, and you have regular company meetings. Suggest to your management to volunteer to stream the meetings, so remote workers also can attend. In our company, we use Workplace by Facebook, where we have the ability to stream, so we have done this. Many employers will be thrilled by this opportunity, and might assign a small budget to the stream team, so you can get some equipment. If this opportunity rises, priorities audio equipment, as most modern smartphones will give a decent video feed. We will use the coming months to gather experience with our newly aquired replacements for the borrowed equipment from sitOSLO 2019.

You can check out the session on our YouTube channel, and I would off course encourage everybody to subscribe to it. I would also like to use the occasion to promote Oliver Kohls amazing project openSIT, where he gathers all SAP Inside Track sessions in one place. Visit the site, and give him your support for his great efforts for the community.

And for us in the sitOSLO crew? We will soon begin the planning of SAP Inside Track OSLO 2020. Yes, there will be one this year too, and we are aiming for a august date like last year. Will we stream?

A great post and explanation, Ronnie, nice work. And thanks again to you and Kristian Larsen for such a professional experience!

I did double-take when reading this post at one stage where I saw the screenshot of me with the thought bubble - "that's not sitOSLO, that's from a ABAP CodeJam!" but I then remembered it was because *I* had used that as a screenshot in my presentation. Inception FTW!

I didn't know about OBS Link, and reading more on that I just learned that there's now the HD60S+ which doesn't even need OBS Link - this is great news, because I remember not being able to use the HD60S on my MBP in the past. Thanks!

Thanks DJ. I think 5 months waiting is enough. It was time to keep my promise to Nabheet and the others. But this writing thing is hard. ☺️

I saw the new HD60S+, and got instant GAS. But it's a bit expensive, so I guess I'm stuck with OBS Link for the time being. ?‍♂️

And sorry about the confusion. Magical slide though. That's the feeling I have, constantly. ?

Wow what a great summary, I seriously suggest you to create a course on openSAP or somewhere for the same?. I was about to suggest add it to the wiki but its already done!

It will help us in 2020 events:)Thanks Ronnie and keep rocking!

Thanks Nabheet. I don't think this would be a subject for openSAP though. ?

Thanks for sharing this with all the details Ronnie! This might come in handy with the community events I'd like to organize here in 2020. 😉

Thanks for the feedback, Pierre. Let me know if you have any questions, or want clarification on something. And good luck with your events. Looking forwards to the reports. ☺️

Such a great summary of your efforts, and I'm impressed with the production quality you were able to achieve at first try already. Your focus on good audio is spot on, because it makes such a big difference for consumers. And I got plenty of new things to try out from your setup, with all the equipment that you have listed.

Maybe you find some time to look into our Streaming How-To in SCN Wiki, and see if you can improve it and add some of your setup alternatives? I've added a link to you blog post already.

Here is an additional trick I found. At the last sitBER I had a stream setup issue early on, but had tweeted the live stream URL already, so I had to send another tweet with the changed URL. There is actually a stable live stream URL, where you just have to add /live to your channel URL, e.g. https://www.youtube.com/c/sapinsidetrackberlin/live for the sitBER channel.

Thanks for the great summary, and for mentioning OpenSIT! I hope we can meet at a SIT nearby anytime soon to nerd out further on streaming setups 🙂

Thanks Oliver Kohl. I will try to find the time, and see if I can bring some value to the wiki. And thanks for the tip about the stable url. ☺️