Many thanks to Barbel Winkler for tagging me in her BIF blog:-

I knew it would just be a matter of time before someone “nabbed” me.

I joined my organisation as a student back in 1989. Here is me back then in London. I was an accountant back then. However I will say that on my very first day on the job I was given a really boring job of re-arranging data on a spreadsheet into a different format and by the end of that day I had discovered you could write programs (macros) in Lotus 123 and had done just that. I had been programming in BASIC (and later PASCAL) since I was 14. In fact I was probably at my best programming wise when I was 14, as at that age no-one has told you what is impossible so I invented all sorts of weird things.

Fast forward 8 years and it is 1997 and I am still an accountant. I decide to go to the toilet and whilst I am in there one of the managers asks me if I want to come and work on the SAP project. Naturally I said yes, and the rest is history. I cannot help but think how different life would have been had I decided to go to the toilet ten minutes earlier or later, This also proves you never know if a life changing thing is going to happen to you in the next thirty seconds. 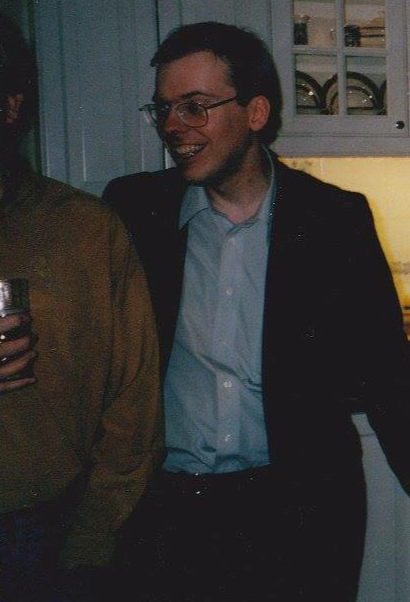 That first SAP project was an unmitigated disaster. None of us knew what we were doing, more disturbingly the consultants did not know what they were doing either which is not surprising – the consultant woman assigned to me turned out to have been on the same SAP training course I went to the week before me. Even worse I am not sure a lot of the SAP staff back then knew what they were doing either. In retrospect the SAP training courses back then were pretty useless as well, so all the stars were in alignment for a total catastrophic failure, which is what happened.

This sort of thing was very common in those days. The “cure” for the non-existent Y2K problem was far worse than the supposed disease, but a lot of money was made and it seemed back then if you could spell the word SAP you could make a fortune as a consultant, though of cost the charge out rate for a consultant was ten times what they actually got paid.

Anyway we went live with SAP and could not invoice our customers, we could not pay our truck drivers, and we could not close the books at month end. At year end we had to guess what all the GL balances were! The auditors were not best impressed, but amazingly passed the accounts anyway, which says a lot about how “independent” auditors really are.

However it could be said that the best way to judge people is not to look and see how many mistakes they make – because everyone makes mistakes – but rather to see how they deal with those mistakes. You could curl up in a ball and hide, or you could do something about them.

It was one hell of a time but we all worked like crazy to get back some sort of stability. My parents met me for dinner one evening and noticed I was shaking and could not stop doing so. I looked back on a video that was made about how successful the project was (!) and whilst the project manager was in the foreground talking up what we had done and how well it went I could see myself in the background staring at an SAP screen and looking really worried, as well I might. I also recall at one point I was the only one in the project room and the phone went and it was SAP asking if they could use us as a case study of a success story. They were puzzled when I went into hysterical laughter,

Anyway, the important thing is that we succeeded. We pulled ourselves back from the brink of destruction. The end result was a team of people whom you knew, if faced with the worst possible thing that could possibly happen (SAP wise) could deal with it. That meant we all got promoted and sent round the world on other SAP projects. It would never have happened if everything had gone well.

This brings me to the first of the “blog it forward” questions:-

In which countries did you work thus far and where did you like it the most?

At age 30 I left the UK and went to work in Israel (for the same company). It is a bit of a wrench when suddenly you are cut off from every single person you have ever known, but it was a great opportunity and I loved it primarily because living in Tel Aviv was so completely different from living in London. The language, the culture, the religion, having to have a gas mask by my desk, the list of differences goes on forever. Ironically the only point of similarity was that at that time bombs were going off on a regular basis in both London (due to the IRA) and Tel Aviv.

That project was a fantastic success mainly because I think the culture there embraces technological change with open arms which has not always been the case in other SAP implementations I have been on.

Then in 2000 I went to good old Australia, which has since become my home. 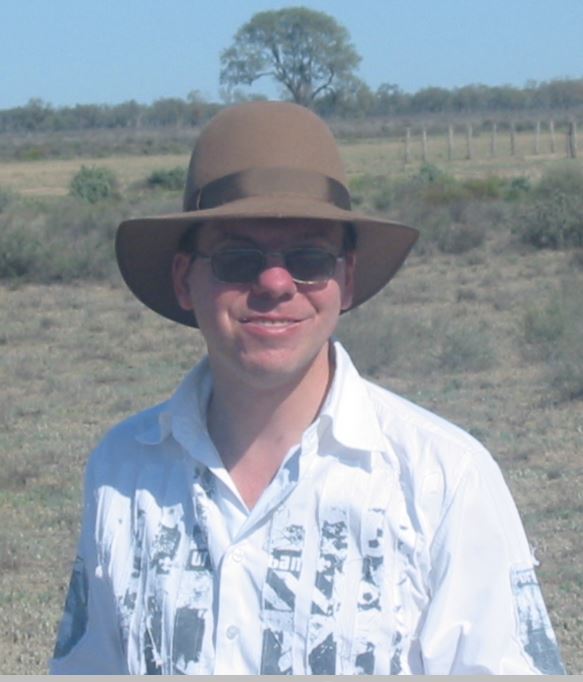 Since that point I have been on several extended secondments – 9 months in the UK in 2009 followed by two and a half years in Heidelberg, Germany. More recently I have just returned from 18 months in Heidelberg.

As to which I liked the most I have no particular preference. I enjoyed everywhere I have worked. If I absolutely had to choose then Australia would probably win on the work front (no rules) and Germany would win for being able to go to SIT events all over Europe and going in and out of SAP headquarters like a yo-yo. I got trapped in the door twice due to my bag getting caught up in the revolving door mechanism. 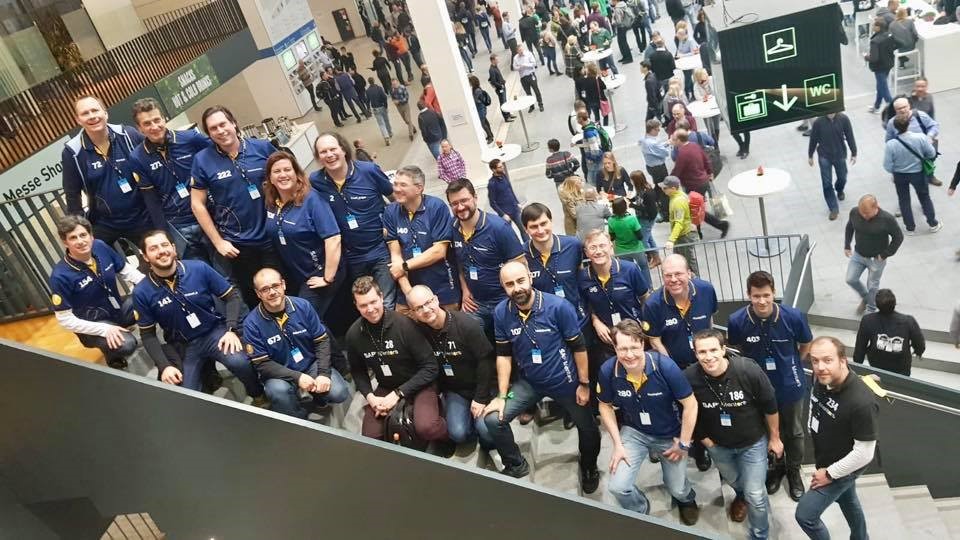 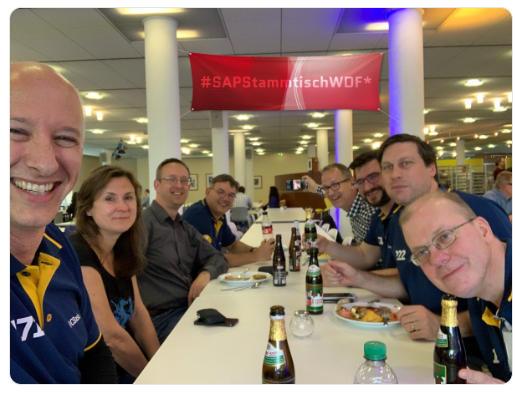 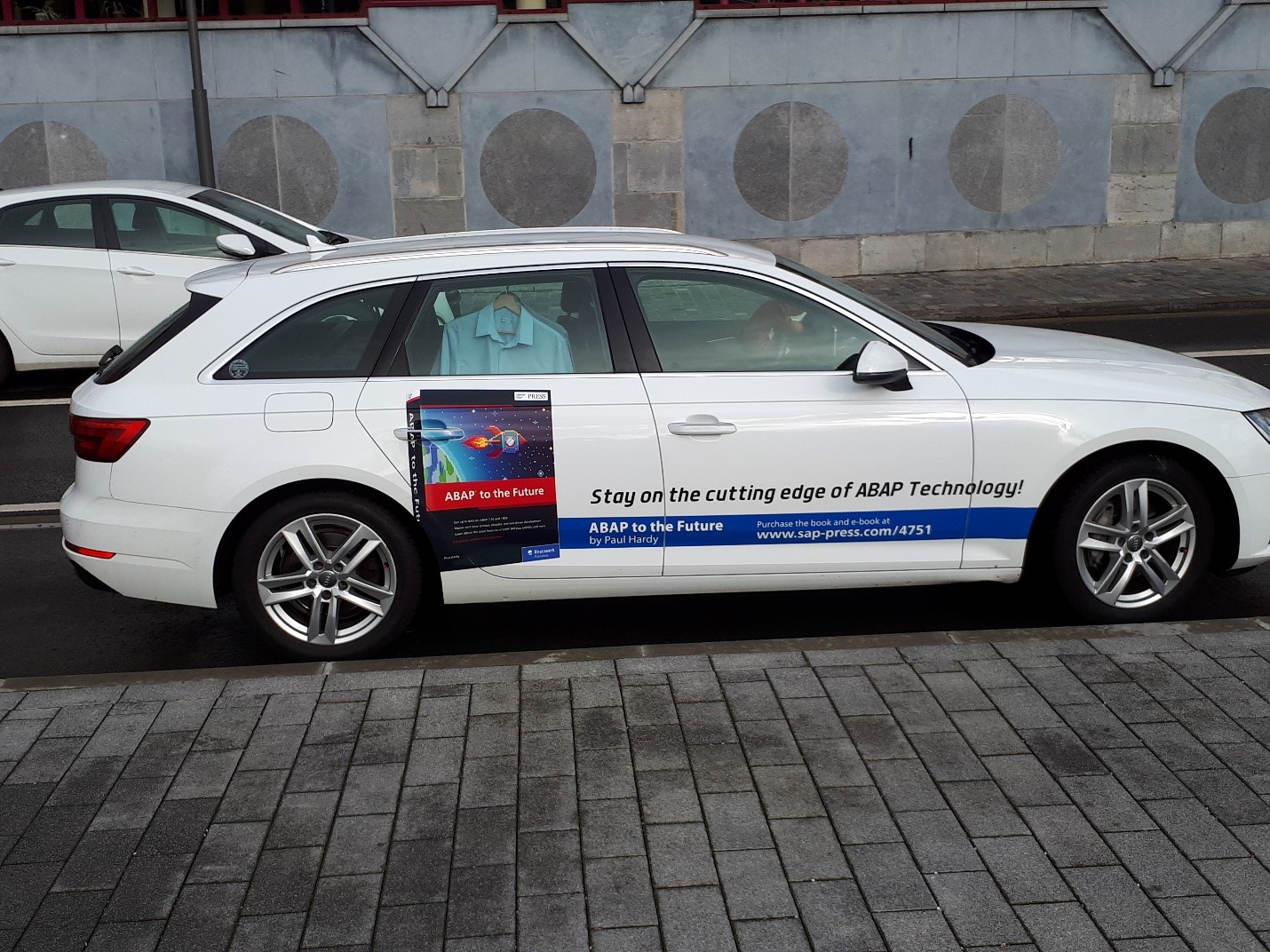 Do you have an example for when SAP Community “came to the rescue” with providing just the information you needed?

Going back about ten years the SCN was in what I would call its “golden age” when there was something I could use in real life being published pretty much every day. In recent years that sort of stuff has migrated to GitHub.

The real lifesaver was when I wanted to get the SAP Web IDE going for the first time – more specifically I wanted to generate some UI5 templates based on backend services I had created and the Web IDE just did not want to play the game.

It is probably really easy now but back at the start it was a nightmare – but reaching out to the SAP community I got bucket loads of help until finally everything worked. The moral of the story is that when you are really stuck, the community is there for you.

Have you been able to apply learnings from your spare time activities to your work (or vice versa)?

This is what I call a virtuous circle. If I do something new and particularly clever at work in my coding at work I take a few minutes and make a note to that evening add that new clever thing as an example in my next book or presentation or whatever it is I am working on at the moment.

Conversely many times at work if I get lost with the new ABAP syntax I open up the PDF copy of my book to have a look at how I am telling other people how to do whatever it is. If that helps me then hooray, otherwise if I cannot understand my own examples what hope has anyone else, so that goes down as something that needs to be improved as well.

My other main spare time activity is public speaking and the organisation “Toastmasters International” which trains people on public speaking. That has a big relevance to work as I often find myself doing work presentations. Most presentations at work are terrible with people reading out their slides and the audience wishing they were somewhere, anywhere, else. I try to not inflict that agony on my work colleagues when I am giving a presentation in the office.

I would be “The Brown Bottle” from Viz magazine. In the winking of an eye a dramatic transformation has taken place.

This is the most important topic and I amazed it has not come along until now. Happily Barbel brought up this vital matter with pictures of her fluffy sheep in various places around the world.

My wife and I refer to stuffed toys as “fluffs” and we have a fair amount of them though not as many as Barbel. Here is our Camel trying to raid the beer in the fridge in Germany. 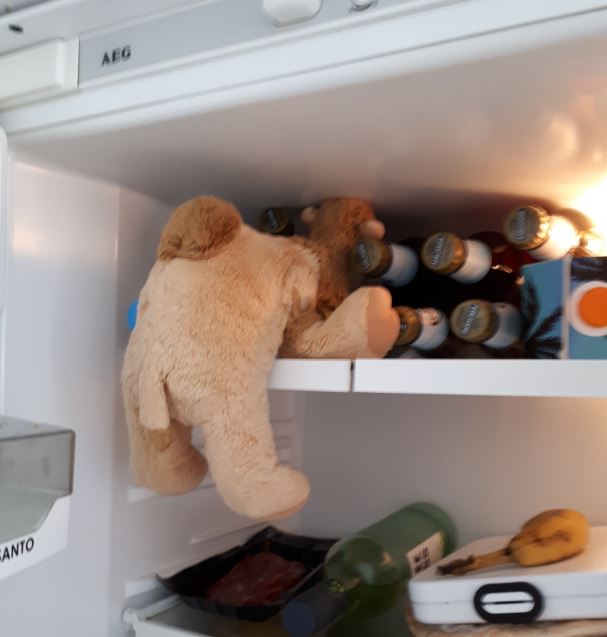 And here he is below with some friends. Amazingly they made a fluffy toy based on the Australian “golf ball octopus” which is in real life is the size of a gold ball, and if you find one on the beach and pick it up, it stings you and you don’t notice but later on when you go to sleep your heart stops and you die. They were used as the murder weapon in the novel “State of Fear”. So, charming creatures overall, just the thing to make a cuddly toy out of. 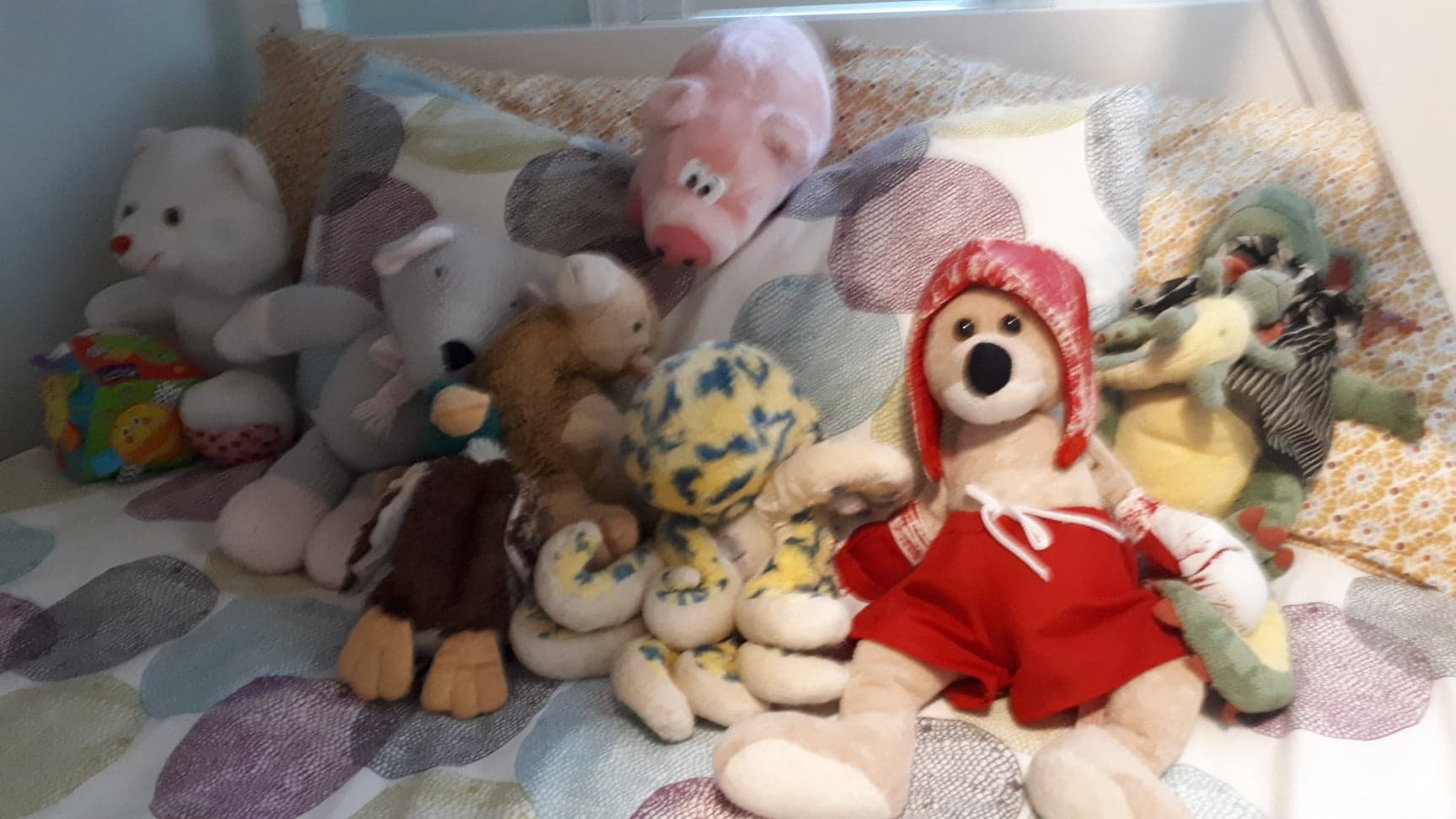 There is a fluffy dog my wife got from IKEA in Walldorf next to SAP headquarters, which she took all over Europe to guard the car. Here he is below with some friends. The turtle came from the Christmas Markets in Heidelberg. 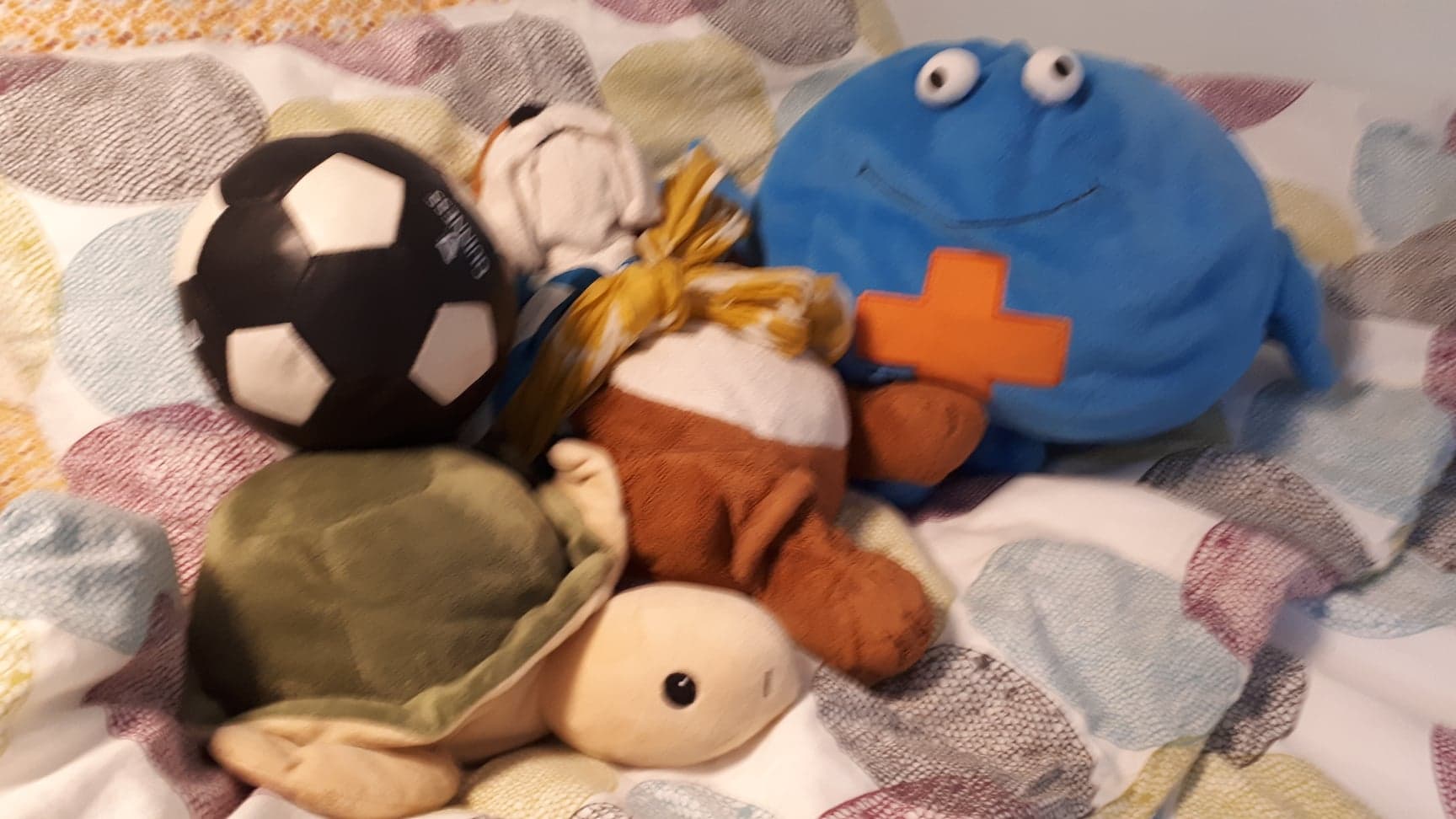 The thing about these pyramid schemes is that after a while you run out of people to tag, and I have no doubt that this will end up with the same people getting tagged multiple times due to it being quite difficult to keep track of who has done a “BIF” thus far.

Nonetheless, I pick two people, from “SAP Inside Track” world, and if either of them have already been “done” then I can only apologize.

As I understand it, I have to look up the original BIF blog, look at the list of questions at the bottom and pick three for my “tagees”. So, here we go:-

Is there life on alien planets?

Thanks for catching the BiF-Baton and sharing information about yourself, Paul! I‘m really glad to read that that I‘m not alone when it comes to having fun with fluffy toys!

And that SAP-project go-live from way-back-when reads like a real nail-biter!

Hi Paul, and welcome to the #blogitforward family!

I'm happy to say that my invitation to join our SAP project did not occur in the restroom - but you just never know when opportunity will call.

I do have questions about what the heck was going on with the first picture, but then again, it *was* the 80's.  😉

I think there are no worries about tagging people who have already been tagged, or not going back to the 'original' (actually the introduction to the sequel) because we can't really track who has BIF'ed and who has been tagged or anything like that.  You get a free pass on your tagees.

Thanks for sharing your story!