The following article deals with a mixture of legal as well as business requirements. Thus, it is in general infeasible to provide legally compliant and universally correct statements for all possible use cases. This article does not provide any legal guidance, nor should it be interpreted as giving it as such.

This article serves to increase the understanding and should be a work of reference for the topics of end-of-purpose determination and ILM-based archiving. The terms usage, blocking, deletion, waiting and retention period are explained and put into context. In the course of doing so, various constellations of these time periods are analyzed. The analysis leads to practical consequences for usage.

I would like to give special thanks to my colleagues Reinhard Scheid, Manuel Brand and Paul Townsend. Their comments, reviews and knowledge corrected, improved and smothend this article.

I should point out that the following introductory words are to be taken with a good dose of humor. The group of topics this article deals with is primarily complex. Newbies should not consume this article all at once. Allow yourself breaks. Read each single chapter with nice gaps in between. And don’t despair if you quickly feel like you are ‘lost in space’ – stick with it, it’ll make sense in the end.

1. Introduction and Simplified Determination Approach for the End of Purpose

Personal data shall be […] collected for specifed, explicit and legitimate purposes and not further processed in a manner that is incompatible with those purposes. (Art. 5 p. 1 GDPR)

These principles result in the necessity to erase personal data when the so-called purpose has ended. An example:

Customer Miller puts in an order. Three days later, this order has not yet been processed. Miller revokes his order. During these three days, the order plus all necessary data are allowed to be stored. The primary purpose ‘Order-Sales-Delivery’ is active during these three days. After those three days, this primary purpose has ended. Thus, the personal data (the order plus any related personal data gathered in addition) needs to be deleted.

Deleting (personal) data directly at the point when the primary purpose expires is usually prohibited because of other laws. The most prominent example for the jurisdiction of Germany is the Tax Code (German term: Abgabenordnung (AO)). The Tax Code defines retention obligations and thus prevents data deletion for a certain period of time. In this case Art. 17 p. 3b GDPR comes into play. If other laws prevent deletion, the (personal) data needs to be blocked until its final deletion. I.e. access to blocked data must be prevented for typical users. Only users with special authorizations (and due to legally compliant reasons) are allowed to display the data (e.g. a tax auditor). There are no concrete requirements mentioned in the GDPR regarding the ways or rather the technical approach needed for blocking. However, the measures that are used need to be effective and applied. Setting a blocking indicator (e.g. a boolean value) might be suitable. In combination with authorization checks, the blocking indicator forces an access and thus also a processing restriction.

As a result, blocking takes place after primary purpose expiration. The blocking lasts until the data is deleted. The retention period (according to the German Tax Code (AO)) lasts for the same duration.

Metaphorically speaking, the end of purpose is the arrowhead of the yellow arrow.

Strictly speaking, it is a determination of a (calendar) date. In our example of the cancelled order it is the cancellation date. Depending on the business transaction, the so-called end of business can differ. E.g. for a non-cancelled order there will be no cancellation date, rather the delivery date might be used instead. Please be aware that the end-of-business determination within SAP software is not only product specific but in addition module specific, document-category specific etc. Thus, it is highly specialized.

The end-of-business determination for transactional data (e.g. orders, billing documents, …) is business-process specific. For master data, this determination is far more complex. Terminology already indicates that a direct transfer of the concept for transactional data is impossible. For master data it is more suitable to use the term end of purpose.

For master data, it is essential that there is no ‘best-before date’ defined by a process or by something else. Let’s take the example of a customer (KNA1-record). Such a customer exists. Until when? Forever, without data privacy or other legislation. There is no process or organizational measure which limits the usage period and/or forces deletion of customer master data. Due to the GDPR, such behavior is made impossible. A customer master record must only exist as long as there are no expired primary purposes. The end of purpose for a (person-related) master record (blue dotted line in the figure shown) in general results only from the end dates of all business transactions (yellow arrows) related to this master record.

From a mathematics perspective, the end of purpose of (person related) master data records can be described as follows:

In human words: The end date of the primary purpose for a business partner results from the set of business transactions of this partner, namely the maximum end date of all these transactions. Partner in this case is synonymous for SAP Business Partner (BUT000), customers (KNA1), vendors (LFA1) and contact persons (KNVK).

For the determination of a partner’s end of purpose, the following process applies:

This determination process has a major disadvantage: There is a fixed and direct coupling between the business transaction’s end dates and the partner’s end of purpose. In particular, there is no possibility to incorporate some kind of waiting period for this (over-)simplified approach. Hence, it is not taken and implemented in SAP products.

However, this (over-)simplified approach does show the basic principle of end-of-purpose determination without digression and (too) complex details. It should be understood before moving on to the more complex details that now follow.

OK, time for a coffee or tea break

The Pareto principle (80-20-rule) applies to the end-of-purpose determination too. The (over-) simplified approach explained so far only requires 20% of the cognitive and implementation effort to reach 80% of the overall solution. Let’s now tackle the remaining 20%, which unfortunately requires 80% (or more) of the cognitive performance and effort.

Customer Miller puts in an order. This time it is not cancelled after three days but processed and delivered as usual. With the delivery, the invoice is issued. Customer Miller pays a few days after receiving the goods.

Assuming the invoice is the final business transaction for customer Miller in this process (i.e. for reasons of simplicity we won’t consider accounting or similar processes here), the (over-)simplified determination approach produces an end of purpose which is equal to the invoice’s end date. However, waiting periods should be applied too for the reasons already mentioned above. We therefore define the following waiting periods:

It should be noted that depending on the waiting periods (which might be nonsensical), some other business transaction could also be controlling the end of purpose.

OK, time for a relaxation exercise

In this example, all three types of business transactions use the criterion sales organization. Similarities can be seen for the sales document category. One criterion, the sales district, only occurs for deliveries. We enhance the table for defining waiting periods as follows:

Table 2.2 also shows a clear disadvantage. Nearly all columns (criteria) are only used by a single type of business transaction. Only few are used multiple times. Thus, this is a sparse table (refer to sparse matrix). Adding more types of business transactions with additional criteria would vastly increase the size of the table. At the same time the table’s usability would tend towards zero. Apart from the poor usability, there are also technical disadvantages for such a table concept:

A solution for such sparsity is to split the single table into several ones. Due to the different types of business transactions available, it is advisable to use one table per type. This enables you to add further criteria per type in future or to implement extensibility features per type.

The used schema changes as follows:

2.3. End of Purpose for master and transactional data

As the difference to the previous figure shows, considering the delivery in addition changes the business partner master data record’s end of purpose. It has now moved into the future. In addition, the retention period for the business partner master data record has changed. It starts with the end of purpose that results from the order and the delivery, and ends with the maximum retention period of the order and the delivery. Let’s add the invoice.

The examinations of the waiting period made so far are too coarse-grained. Apart from the end-of-purpose determination we have considered up to now, a waiting period is also present for data archiving. Overall there are the following waiting periods:

The following table includes information about each definition location, definition details, and the commonly used synonym for all three waiting periods.

The issue with this configuration is the existence of the pink-colored time period. Within this space of time, the following is in force:

Now let’s examine the opposite case. In this case, the order’s waiting period for the end of purpose of the business partner master data record (K1) is defined as 1.5 weeks. At the same time, the waiting period for data archiving of orders (K2.2) is only 1 week. The figure looks like this:

The issue with this configuration is once again the existence of the pink-colored space of time. Within this period the following applies:

So far, we have not yet examined waiting period K2.1. The reason for this is a property of this waiting period. By definition, it is application-specific and it is (potentially) interpreted non-uniformly. For example, the SD sales order and the SAP Customer Relationship Management (CRM) sales order have been using waiting period K2.1 for decades. However, the related data archiving processes differ when it comes to the technical check for whether or not the business (respective) order is archivable.

For the SD sales order the technical and operational checks on the termination of waiting period K2.1 are performed within a single process step (refers to the archive write program). This step also checks waiting period K2.2 (if defined). If the evaluation is successful, data archiving is directly possible.

The following configurations are possible:

After examining all possible configurations, it can be summarized that for the SD case either K2.1 or K2.2 should be used, but not both waiting periods at the same time. Moreover, these two waiting periods have the same effect and are thus equivalent.

For archiving CRM-business transactions there are different possibilities. For the CRM sales order alternative A performs technical and operational checks as well as checks for the expiration of waiting period K2.1 within a single process step. However, this process step is a preliminary step (the so called archive preprocessing program). The successful check results in a status change of the sales order (can be archived (refer to transaction BS23 and status I1100)). The business transaction is not automatically archived. Another process step is necessary which completes archiving. This second process step checks waiting period K2.2.

Alternative B avoids the application specific waiting period K2.1 completely. For this purpose a different, alternative process step is used. In stead of setting status archivable the status archiving direct deletion (refer to transaction BS23 and status I1108) is used.

The following configurations are possible: 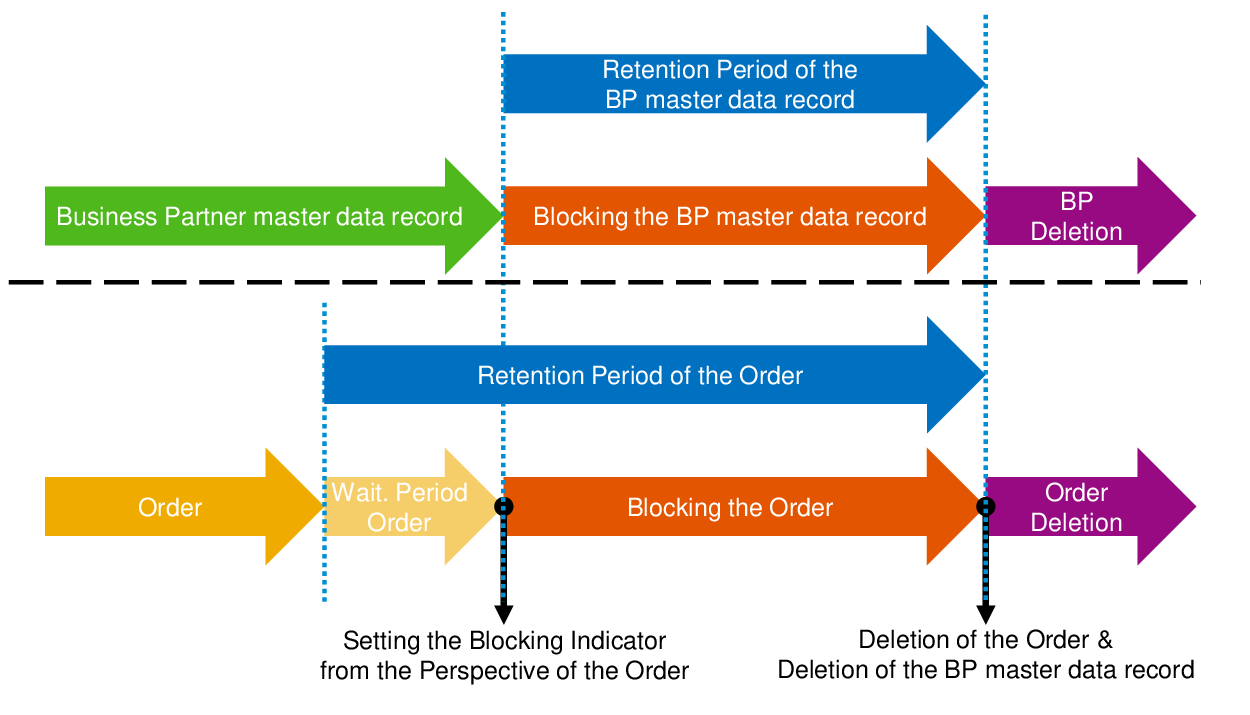 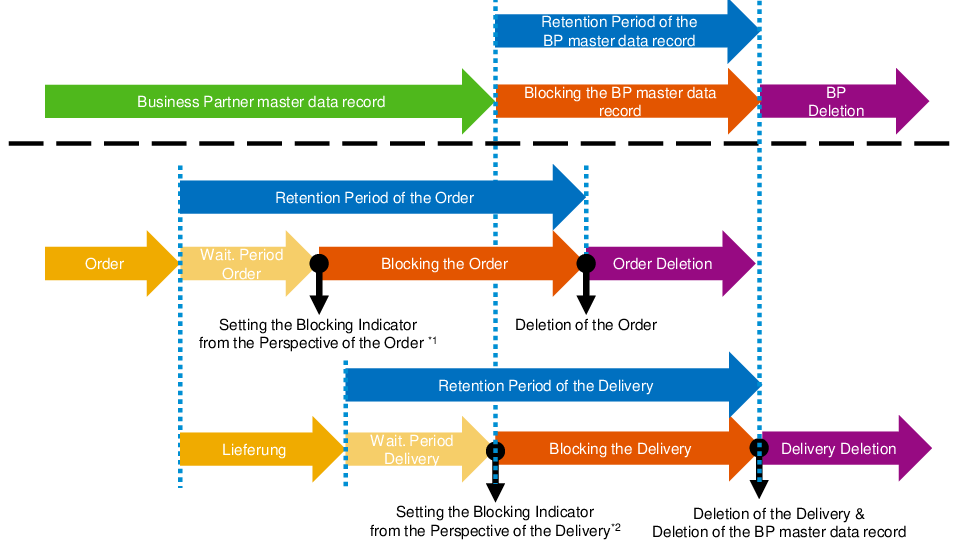 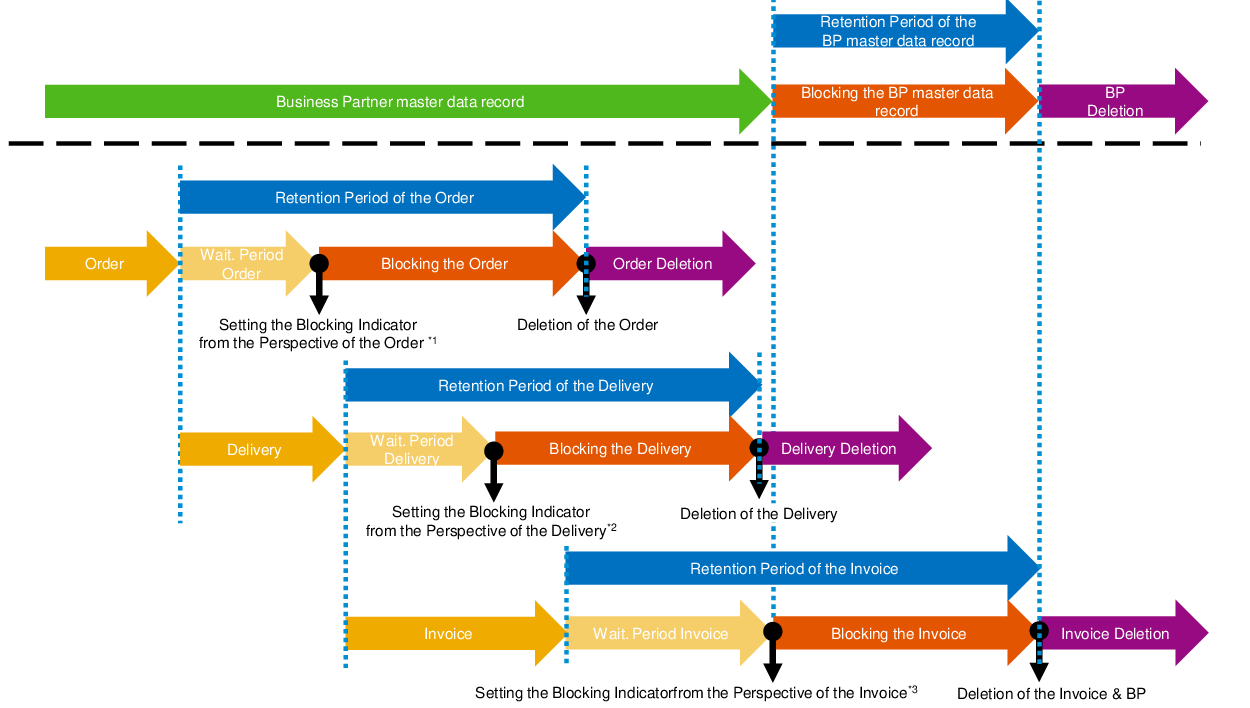 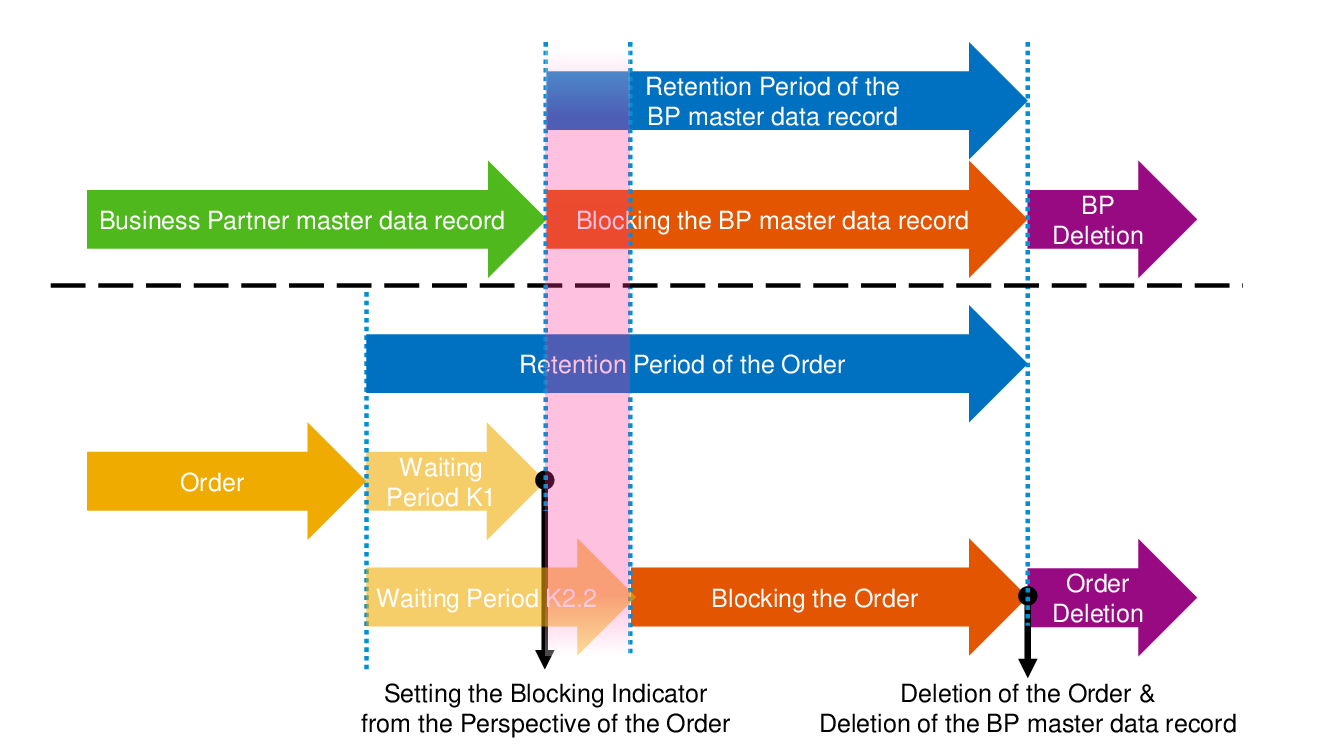 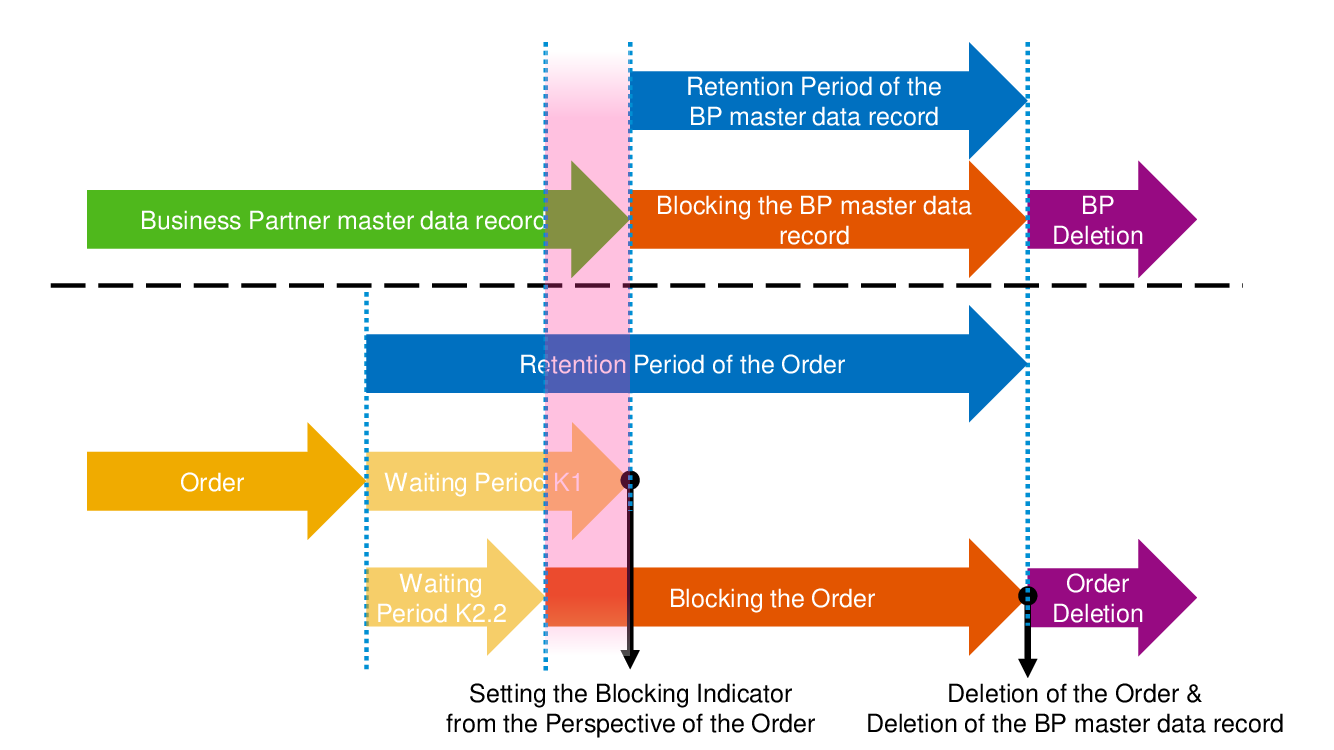 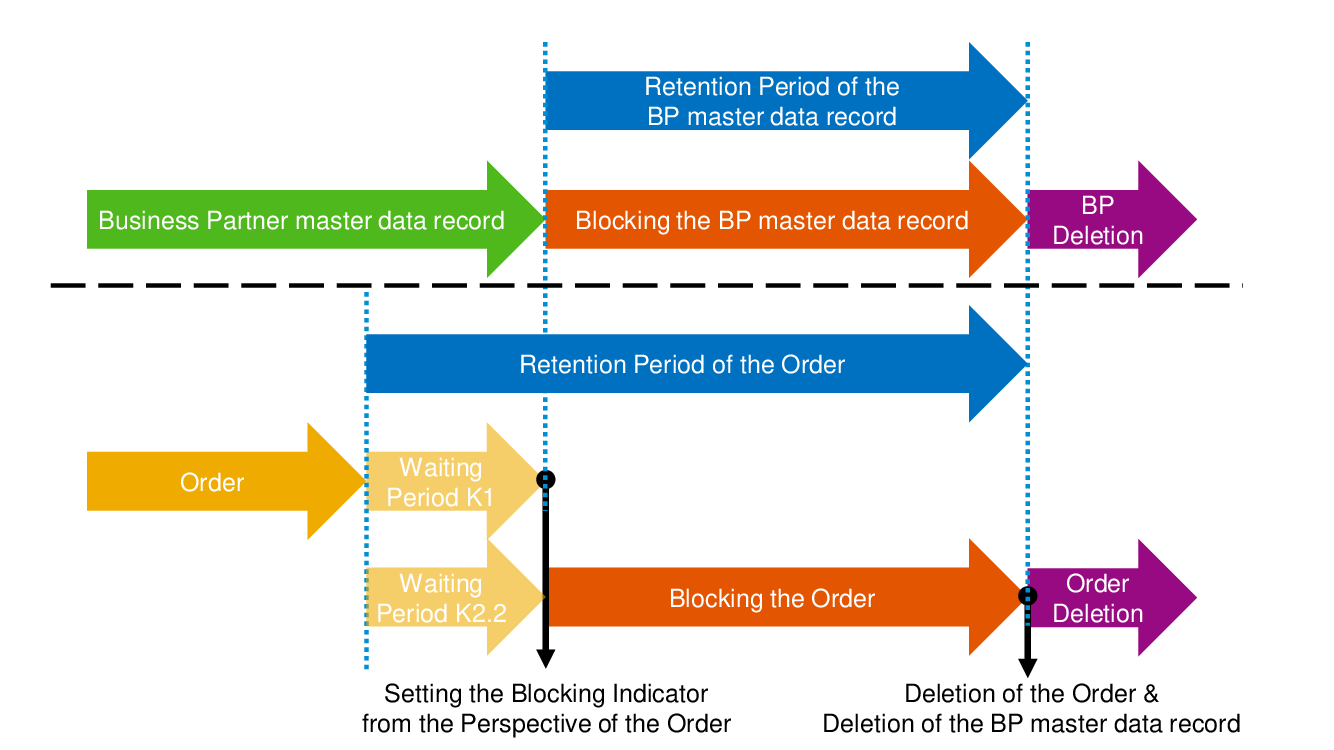 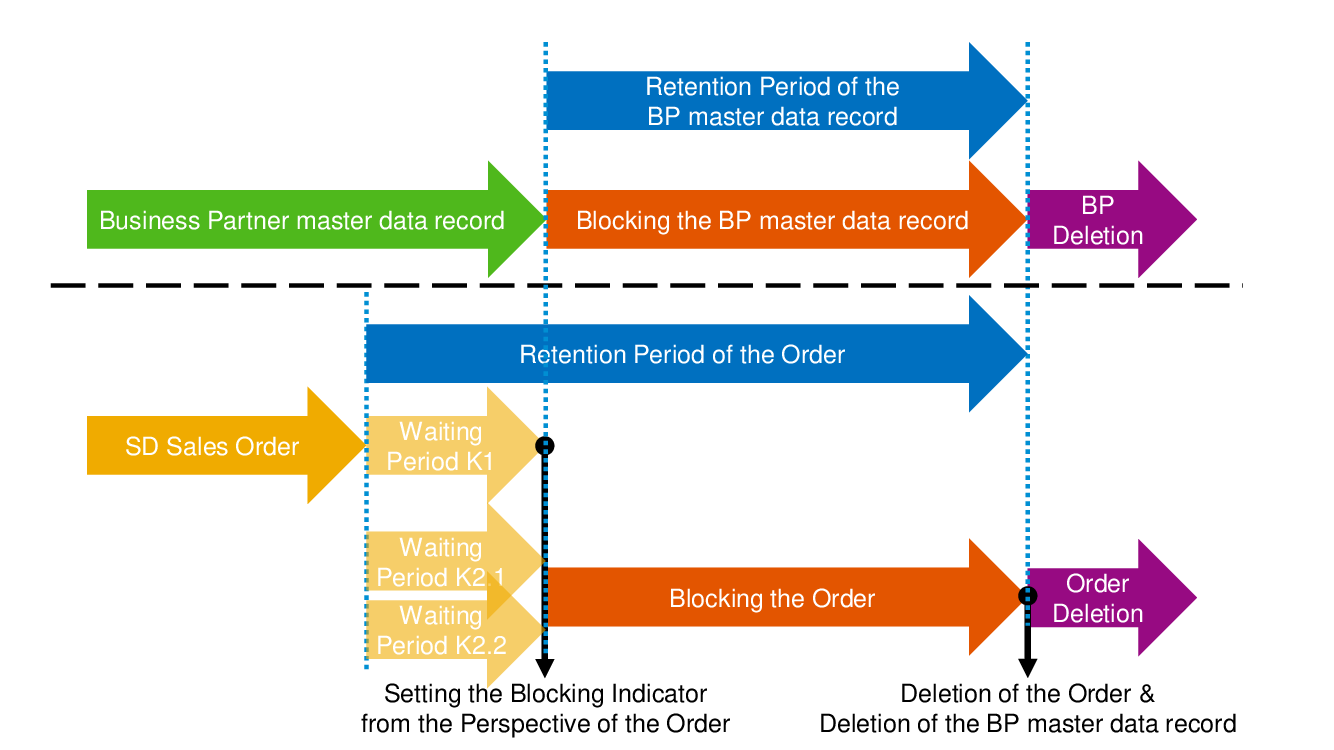 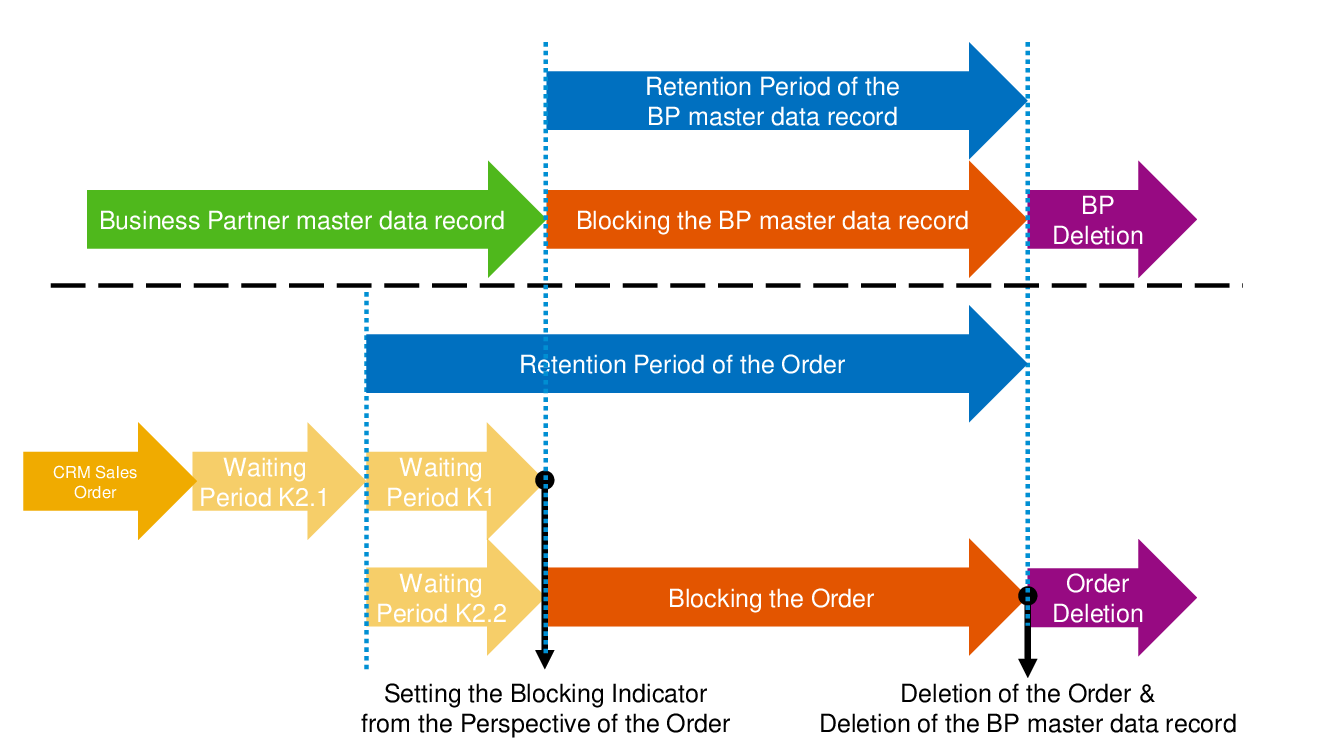