In this article, I will show a practical example of self-association in CDS. You will learn how to define a simple hierarchy in your CDS and how to consume it in your ABAP code.

Recently I have faced a quite interesting problem. There is a concept of something like ‘frame contract’. It means that out of this document many others of the same type (or not necessairely) can be created. Let’s take a look at VBFA table (Sales Document Flow). I am interested only in subsequent Sales Orders, therefore I have filtered out only documents of category ‘C’:

What we can see is a ‘chain’ of documents, or even to be more specific – a tree. Let’s take a look at document 24. More friendly and eye-catching representation of the relationship between those documents would be: 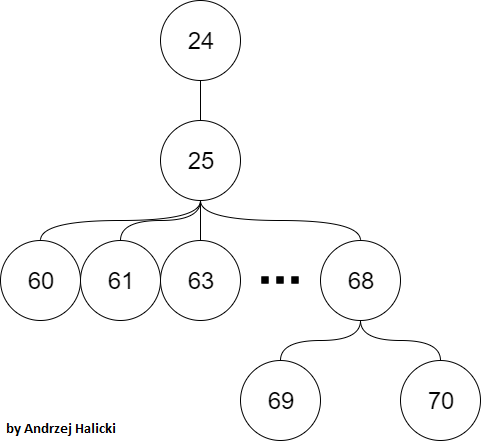 Root parent of the above tree would be document 24 – our frame contract. Below it you will see it’s ‘children’ – subsequent documents. Now imagine that you would like to extract all documents related to your frame contract. Lot’s of twisted ABAP! Maybe there is an easier way of solving this riddle?

Yes! Fortunately, there is – we can avoid looping, reading, assigning and dumping.

We can define a CDS view which would have an association with itself. Let’s take a look:

I have defined a view Z_VBFA based on VBFA and added an association to Z_VBFA. As you can see preceding documents will be treated as parents and subsequent ones as children. The cardinality of the above association is [0..1] as there cannot be any multiple parents – one contract can only have one preceding document, however it can have multiple children. In order to allow consumption of such CDS annotation needs to be added:

It defines parent-child hierarchy and points at our self-association. There is also a second way of defining a hierarchy:

I believe that the first one is much nicer. Remember that in that approach you should not use association.

You can also define a hierarchy object Z_VBFA_HIERARCHY which would look like this:

I have also listed out all $node fields. These are hierarchy-specific fields describing a hierarchy. We will take a look at them later. After running the hierarchy you will see a standard table view:

Now let’s take advantage of the work we have done here and let’s consume our objects in ABAP. There are few useful HIERARCHY functions – you can read more about them here:

We will Focus on three of them:

Let’s implement it in ABAP.

A hierarchy from CDS view with defined hierarchy will be generated.

Selected fields are hierarchy nodes that are always available and describe the structure. You need to select them explicitly and add an alias. Let’s take a look at the SOURCE:

We get all relationships between nodes, starting from contract 24. What’s great all children are listed out in the node column, so our goal has been achieved. Let’s dig deeper into it however and take a look at hierarchy specific fields which may help us with traversing a hierarchy. Below pictures explain two of them: 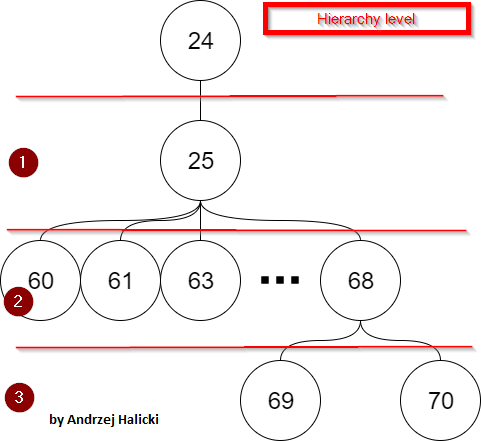 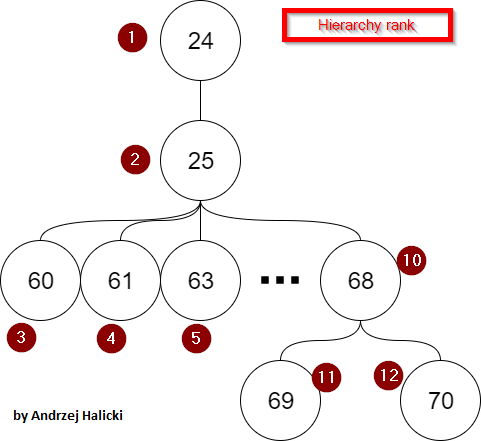 In this example however we are going to consume our CDS hierarchy directly.

I used * sign in select, therefore, all fields from defined earlier CDS hierarchy were selected. Notice that in this case Z_VBFA_HIERARCHY is consumed, not Z_VBFA.

This function will return the ancestors of a given node.

I have added orphans root annotation therefore one relationship in the hierarchy is displayed.

You can combine HIERARCHY and HIERARCHY_DESCENDANTS/HIERARCHY_ANCESTORS:

I hope you can see the advantage of such solution. With few annotations and one select, we can extract the whole tree. With additional parameters like hierarchy_rank etc. it is incredibly easy to traverse through the whole structure. You can even select all other business data and have them all with one simple select. When possible avoid writing complex code!

Very well written post and a great topic.
I've been waiting for someone to eventually pick up this topic and you did it in a really nice way.

The problems with those approaches are clear. In the first case, there is a lot of unnecessary data movement which means, performance will be a lot less than optimal.

In the second case, the problem is that all of a sudden imperative code (how to process the data) is implemented in the DB, even though SQL is a declarative language.
Using this approach, the purpose of the query takes a ride in the backseat, while the developer needs to focus on the correct implementation of hierarchy processing.

This is where the hierarchy functions of SAP HANA are very beneficial. One can focus on what this hierarchy is about and not how to string together the different "nodes".
And this is the thinking that leads me to the single proposed change in the code examples:

The name for the self-referencing association _Recursion refers to the processing technique that is employed to go through and connect the nodes. It does not describe the relationship (association) in terms of the data model.
Better names could be _RelatedDocuments or _LinkedDocuments as this is what the relation is about (given the bi-directional nature of the relation _ParentDocuments or similar would not work).

Thanks again for putting this piece out for all to read.

Thanks for your valuable insight!
I couldn't find any materials apart from documentation so I decided to create one.

Exactly, writing such code on application server would cause performance issues and probably would be complex and not easy to read.

I like the idea of using names you gave as indeed it is not one-way relationship. I will stick to that in my further hierarchies!

Awesome blog. this helped me to resolve my queries.

Thanks! I'm glad my work could help 😉

Hi Andrzej,  I understand how to consume hierarchy object Z_VBFA_HIERARCHY in ABAP Open SQL.  I would like to know how does this CDS hierarchy object is consumed in a  #Dimension CDS view as hierarchy association?

I am working for the hierarchy object, I defined a Hierarchy ZTEST_ORG_HIER,

I want to implement a fuzzy search in it.   How can I do it?

I'm currently learning how to create hierarchy in CDS. Could you please explain what does the 10 and 6 mean in the fields Parent Node and Child Node? Does it refer to any other fields in the hierarchy? Thank you.