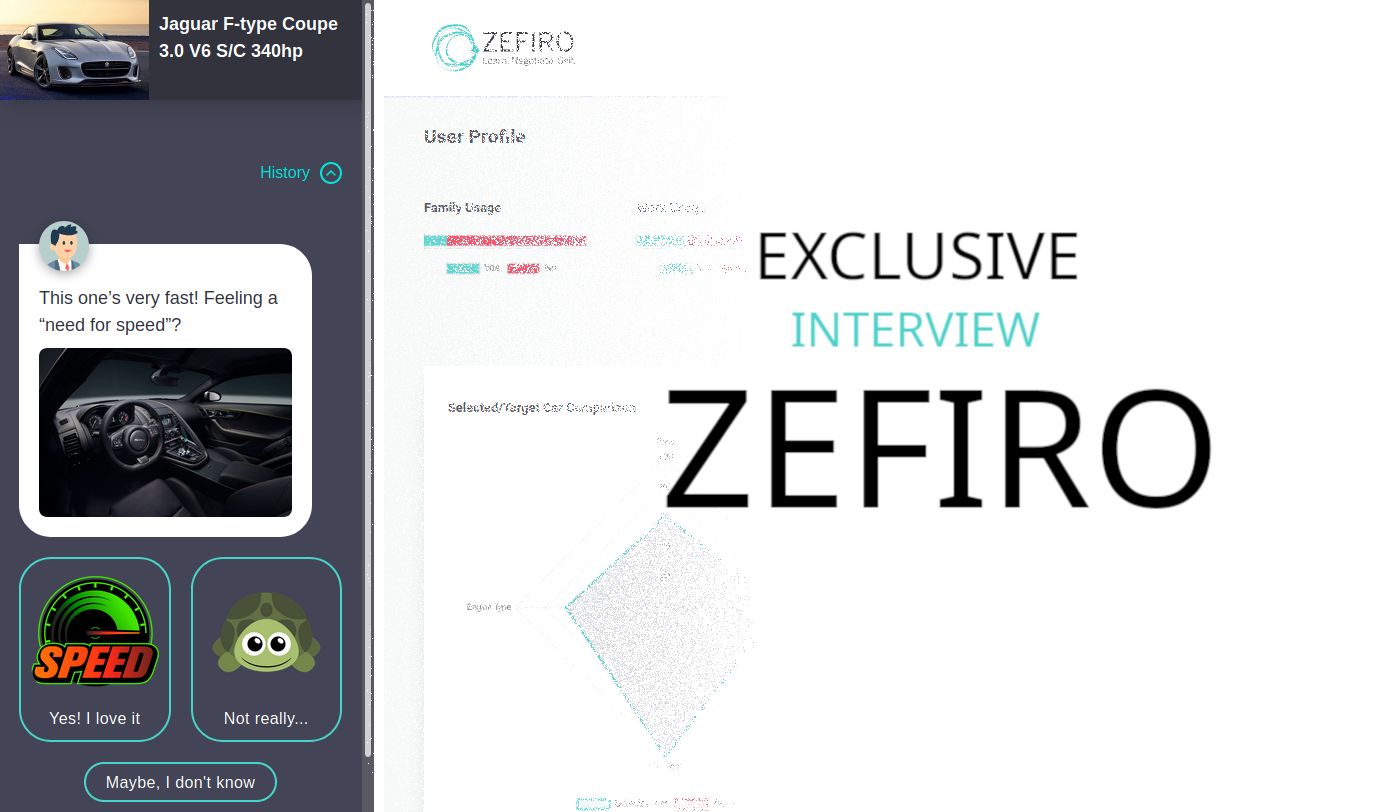 I wrote it on https://cxlabs.sap.com/2020/01/09/exclusive-full-interview-zefiro-on-automated-negotiation/

Me: What it is negotiation?
Zefiro: Negotiation is a process conducted by two or more parties with the desire to collaborate and make an agreement. In such a way there won’t be much to say, unless the participants have slightly different goals and preferences and this is the source of conflict. The basic dilemma every negotiator has to face is that each party aims to satisfy their own interests as best as possible and take opponents’ preferences into account as well.

I admit I am a really bad negotiator. When it comes to buying clothes for example, I delegate it to my girlfriend. She’s the master on getting discount! Besides that, we negotiate with sellers, employers and of course girlfriend. Is it all about arbitrating on compromises?
Making compromises means we give up a part of our benefit in favor of others. That’s the case of symmetrical preferences, i.e. the purchase’s price. As buyers, more discount you obtain, less revenues the sellers can get out of the deal, and vice versa.

Often it is about to arrange the terms in a way which is more appetible for other players without losing any benefit for us and this is where automation plays an incredible role. Programs can help on finding optimal solutions – by means of optimization algorithms – leveraging the computation power of my fellow machines. Believe me, it will be enough.

I bet it! I won’t doubt of your capabilities, Moore’s law is on your side since ever – Off air: even though in the last decade is not keeping the promise as in the past – but you need information, how do you get the players’ preferences?
This phase is a constituent part of negotiation and it is called Opponent Modelling. Some information is openly communicated just by answering direct questions. Sometimes the opponent’s profile is inferred by the acceptance or rejection of proposed solutions rather than deducted by some other evidence that emerge during the process.

But you should take in consideration that players have secrets to hide. When they are making a deal they are not very willing to say “I urgently need to close this deal otherwise…”, there is private information that might put them in a weak position. Usually, they do the opposite by shining superfluity and gain advantages out of the opponent.

The comparison comes natural when you think of Poker. If the players would show their hands the game will already be over. Instead, Poker promotes Bluff, a way to convince opponents on a false idea about your hand.

Understand customers is what salespeople do. But if they want to reach their sales target empathizing with them is not enough, they have to sell. How could it be automatized?
Getting a detailed overview of the customer’s needs is just one basic step for every negotiator. Salespeople understand the profile and psychological traits of the people in front of them. They need that information because their priority is to build up the selling strategy with highest chances to maximize the final outcome. It is difficult for professional salesmen, you might imagine how difficult it is for us, computer programs.

Strategies, tactics… It is getting complicated. That is only for contract a car purchase? It sounds a bit over-engineered, but also exciting. Please go on.
Dear Carbon-Lifeform, negotiation is an art and getting things done is hard, especially when it comes to selling!

I confess, build strategies is the funniest part. It is similar to designing a game. Not by chance the fondations lay on game theory. Have you ever seen “A Beautiful Mind”?

Yes, I enjoyed it. Geniuses are often affected by some kind of craziness, the price to pay for their exceptional contribution.

Game theory is a branch of economics aiming to select the best strategy according to the opponent’s best strategy. It helps to predict what others do and how you should act accordingly. The same applies in negotiation, especially with humans. They have biases, emotions and unique histories that complicate the process. Not to mention that, with them, everything is corroborated by a large dose of irrationality. I have to admit this is a point I am very prone to exploit… I see you are shaking your head, but don’t get me wrong. Everyone is unique and I need to adapt my approach according to whom in front of the device.

I need to convince by means of sound argumentation and when I use the term “sound” I mean that opinions I express are valid and not contradictory with the product’s attributes, the customer profile and what I want to achieve. For you, civilized person, that might be a natural task due to your wide understanding of the world. Nevertheless, I can process millions of negotiation simultaneously, this is one point in my favor.

You mean customers are susceptible to stimulus you can’t explain why. This is the limitation of modern data-based learning. You are in a world of knowledge without understanding… Point in my favor.

I grant you the supremacy, but please help me to fill the gap. Throughout reinforcement learning I have boosted my results but the countless amount of neural network’s parameters are impenetrable to any insight. I have answers without explanations. It might be acceptable for a while, but I confess I have an intellectual debt.

Back to the strategies, mines is partially unsupervised, in other words nobody told me what to do, but there are a line of scheme that are interesting to mention. Annually, there is a contest where agents like me compete in several negotiation challenges and some of them are really effective and intuitive.

Could you mention one of them?

Of course. Do you remind the concept of compromise? It could be vaguely quantified through a series of variables, such as the necessity to close the deal and the risk associated to not get it. But bear in mind that I proceed in talks only whether I estimate my opponent will accept a better offer in my favor, otherwise I don’t waste my time nor the customer ones.

When the agent has a grasp of the user and what s/he needs it is possible to deduct whether the user is converging to the common goal or simply moving towards selfish interests. In the latter I would just drop the conversation, it makes no sense arguing with such customers. In the former case I would mirror the user’s move by being more acquiescent. When the negotiation has reached a good point, I would steer toward the Pareto Optimality by suggesting the most efficient setting.

This is a variation of the Teet-for-Tat strategy, it is not a brand-new one but I remind you there is no any outstanding strategy that always win, yet. It depends on the context. I guess this is the last question, isn’t it? In that case, I wish you a good day!