Although it’s already been a month since the AWS re:Invent 2019 conference, the customers and analysts are still pouring over hundreds of announcements and launches that were made at the event, trying to discern which ones are the most relevant to their businesses and the future of the cloud market in general.

In my role as a Sr. Cloud Architect with Multi Cloud Technology Office, SAP Global Cloud Services, I followed very closely the conference. In this blog, I’ll be sharing some of the highlights from the event – mainly focusing on the most important news from the perspective of SAP customers.

AWS made a series of major announcements in pretty much all areas of IT infrastructure and cloud applications development that clearly demonstrate the company’s relentless investment in new product development and innovation.

The event had a record attendance of more than 60,000 attendees (almost 3 times more than last year), it featured more than 2500 sessions, and had 77 new products, features, & service launches in just 5 days.

In the words of AWS CEO Andy Jassy, their ultimate mission is…

“… to be the infrastructure technology platform underneath all of these enterprises in their transformation strategies and to enable them to be able to invent and to build better customer experience and to help them grow.”

SAP CTO Juergen Mueller joined the customers ENGIE and HP on the stage for the session about how companies are transforming their SAP solutions with AWS. Dr. Mueller talked about SAP’s 11-year strategic partnership with AWS and reflected some of the major joint accomplishments of SAP and AWS, including:

Dr. Mueller then goes on to describe SAP’s Business Technology Platform strategy for the Intelligent Enterprise in the cloud, which is the key tenant of a joint SAP-AWS business architecture shown below and the future focus of the two companies collaboration: 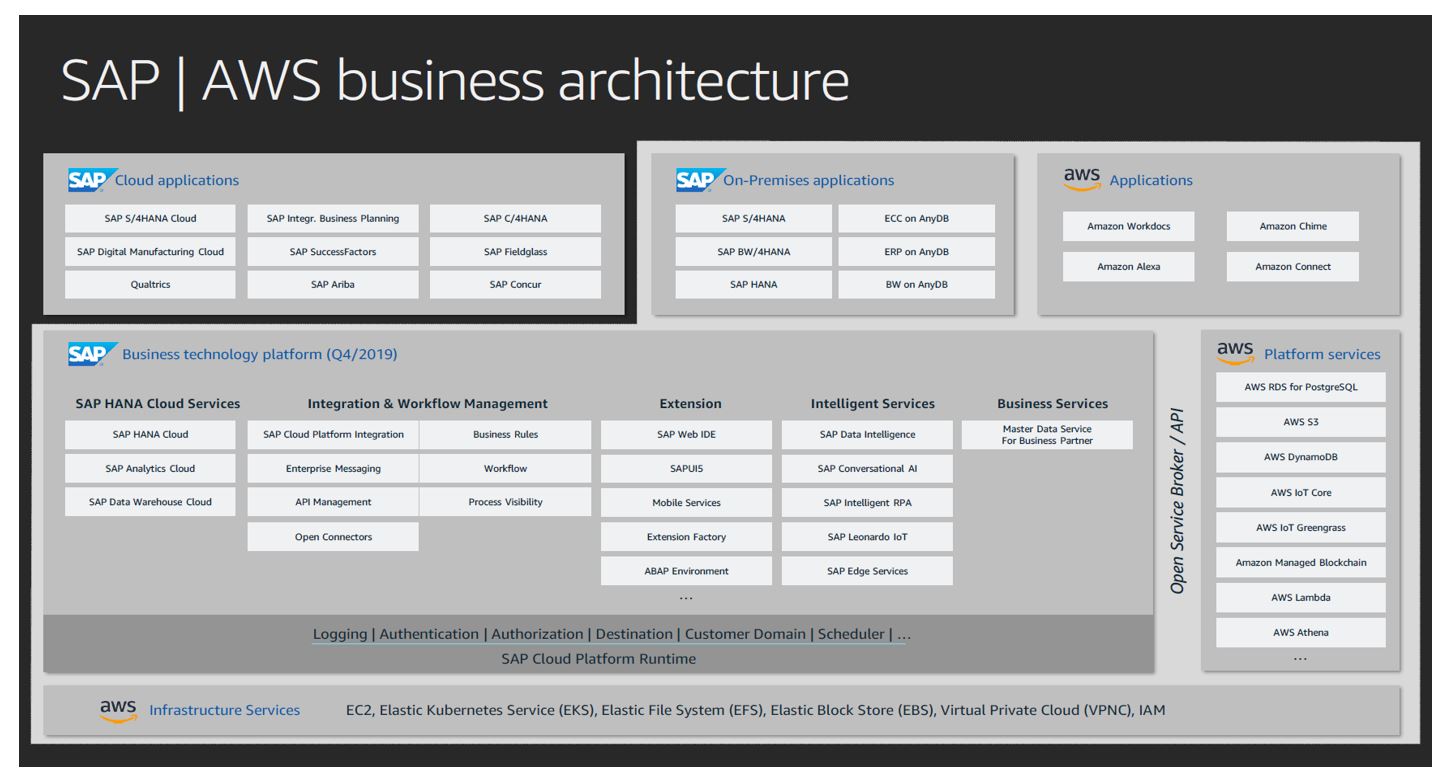 Source: How ENGIE, HP, and SAP are transforming their SAP solutions (AWS re:Invent 2019)

Here are a few selected services and launches of interest to SAP customers:

1. General Availability of EC2 High Memory Instances for SAP HANA with up to 24 TB of RAM

Key benefits for SAP HANA customers include high scalability and flexibility of scale, simplified management, built-in support for elastic storage capacity (Amazon EBS), and seamless integration with other AWS services – as shown below: 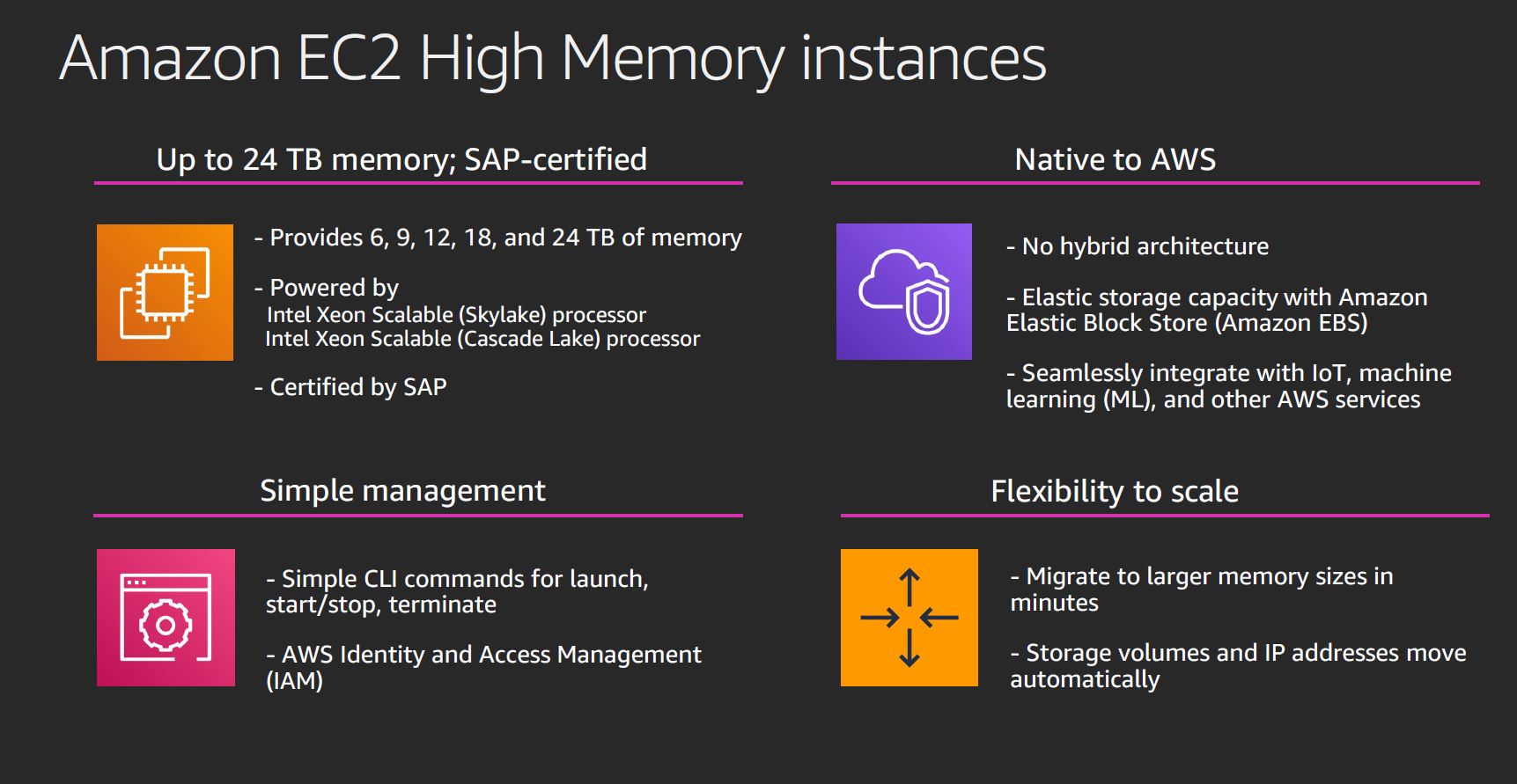 These capabilities have significantly improved the AWS hybrid story: Whether customers want a low latency experience on-prem with Outposts, or lowest-latency in the public cloud with Local Zones, or in the core carrier network with Wavelength – AWS can now deliver the complete package.

In the ML infrastructure area, Amazon announced the availability of EC2 Inf1 instances based on their custom silicon for machine learning inference chip called “Inferentia”, that was pre-announced last year. According to AWS,

In the ML frameworks area, Amazon introduced the SageMaker Studio which was touted as the first comprehensive IDE for machine learning.

In the ML services area, Amazon launched a couple of new tools that are targeting people who are not ML-savvy developers:

Amazon hopes that these services will have a great appeal to smaller enterprises which often do not have enough skilled ML developers and can benefit greatly from using the pre-packaged tools and services for easier development.

With cloud cost optimizations consistently ranked as the #1 topic among customers, AWS wanted to demonstrate their continuous innovation in this area by shipping several new optimization features, such as:

Amazon launched several new Kubernetes/container-based computing services to meet a growing demand from enterprises for flexible and cost-efficient infrastructure that works both on-premise and cloud:

These are the top 2019 re:Invent announcements that you need to be aware of. Want to learn more? Checkout the links below: