Behind UX and SAP Design: Dublin

With 1.4 million inhabitants, Dublin is not a huge city, but is still considered a tech hub due to the EMEA headquarters for companies such as Google, Facebook, Slack, and LinkedIn based there, as well as many thriving start-ups. Our design colleagues Niamh Cooney and Colin Doherty are based at the SAP campus in south-west Dublin, which combined with the Galway office has approximately 1700 employees working there.

A Foot in the Door

I spoke to Niamh and Colin about their work and life in Dublin. They knew each other in college, since they both studied Digital Media Design at the University of Limerick. In 2013, they took the opportunity to do an internship at SAP, with Niamh joining Colin after a few months. After graduation, they were keen to get back in, both returning full-time to SAP as UX designers.

A Taste of the Action

Both Niamh and Colin were pleasantly surprised at being able to come up with designs on their own, despite being interns. Their colleagues’ willingness to help and mentor also gave them confidence. Working on the build.me website, a cloud-based application to help enterprises design and build their own apps, left the greatest impression. Colin reflects on having seen a project end-to-end so early on in his career, “It was fast-paced and great to see it in action. I feel lucky to have been able to see SAP Build grow massively, with companies such as Coca-Cola and Nestlé using the app now.” Seeing the end user really benefit from their work is another major source of satisfaction. Niamh comments “At SAP TechEd Barcelona a few years ago, I got the chance to meet end users and I had this nervous excitement to help them.” She adds that “SAP Build is so humanistic, the user was using this to create joy for themselves.”

Niamh’s typical day starts early, waking up at 6.30 to get to the gym before going to work. Colin has a one-hour commute to the office and uses the time to listen to podcasts. Sometimes after arriving in the office, they’ll grab coffee and quick breakfast with the interns or head straight to their desks to set up for the day. Mornings mainly consist of calls with colleagues in Walldorf and Sofia about the SAP Fiori elements applications, and between these calls they focus on local projects. Mondays involve a planning session with Caroline, a project manager, walking through user stories for design. This is followed by one-on-one sessions with colleagues locally before they start designing, and then grooming sessions with developers take place either on-site or online. The designs are tested out and confirmed by the developers before the codes are submitted. The design process also includes some research.

The City and Culture

Although neither Colin or Niamh are originally from Dublin, both have become familiar with some of its finest spots. There’s plenty of events going on in Dublin, such as Dublin Pride and Love Sensation music festival. For those interested in performing arts, the Bord Gáis Energy Theatre offers musicals galore. In the summer, Phoenix park, home to a zoo and the American Ambassador’s Residence, is a relaxing space to unwind in after work when the sun doesn’t set until late in the evening.

When asked what they especially like about the Irish culture, Colin highlighted how Irish people like to talk about anything with anyone: always striving to find common ground, no matter what background the other person has. Building bridges using “craic”, a Gaelic word for lighthearted banter and a good time, is at the heart of Irish culture. Niamh confirms this, “It’s just walking into a room and knowing you’ll meet someone friendly.” 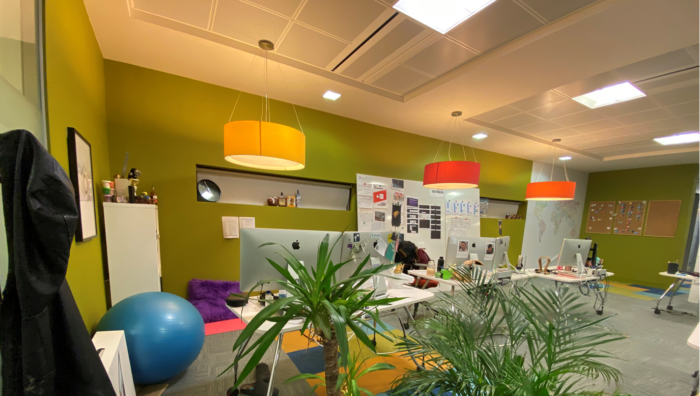 Niamh: “We’ve taken over the space… why would you not want to experiment with space?”

Many thanks to Niamh and Colin for their contributions.

Be sure to check out the other locations in the Behind the Scenes SAP UX and Design series: Bangalore, Palo Alto, Vancouver, Sofia and Paris.