Thank you Michelle for the nomination and passing the “BIF Baton” to me. I still could not believe, I was that famous. 😛 Well, that’s the fun about our community 😀

First of all, a big Hi and happy new year to all my fellow community members. I wish you all a great year ahead 🙂

The capital of northern Indian states of Punjab and Haryana; designed by the Swiss-French modernist architect, Le Corbusier. It was one of the early planned cities in post-independence India and is internationally known for its architecture and urban design.

The city has one of the highest per capita incomes in the country. The city was reported to be one of the cleanest in India based on a national government study.

Chandigarh is also known by the name of city beautiful. 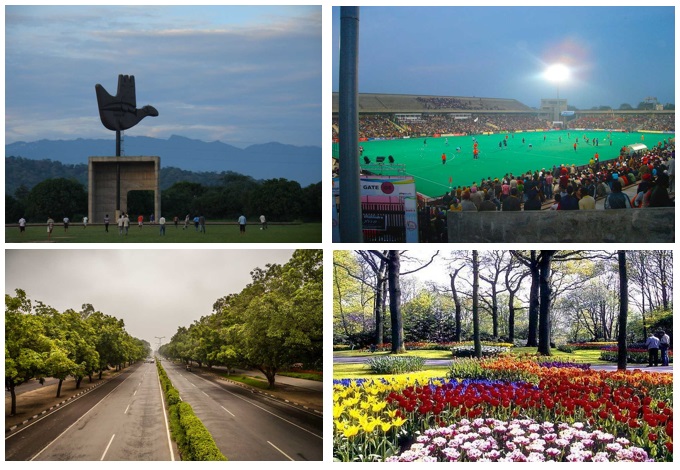 Just recently, in fact last year I completed my Master’s in Information Technology.

You must be wondering, how I am working as a software developer after completing my graduation in Civil Engineering in the first place. Well, everyone has a story, I too have mine.

It all started after I completed my graduation in 2014, and I was looking for a job in constructions and building designs. After looking for an opportunity for 3 long months, I failed to get one. Then one of my cousin, called me and asked me, if I would sit in an off campus placement drive of Infosys Ltd.

I gave the interview and fortunately got placed in Infosys. Then trained in SAP ABAP, worked on core ABAP since then.

My family consists of my parents, a younger brother and my wife. Me and my wife live in Pune, whereas my parents and my brother live in Chandigarh. Lots of my my I suppose… 😛 … lucky one…

Now, I would try to answer the questions, which were asked by Michelle in her blog post Blog It Forward- Michelle Crapo

What do you enjoy about the SAP Community?

Well, to be honest, I started using or in fact started visiting community pages just recently (around 6-7 months ago) in my 5 years as a SAP developer. But, till now it has been an incredible journey.

The most important thing which I like about the SAP community is that you come to know about the developments and concepts which were/are untouched to many. There exists people with different expertise and skill sets. These people when share their experiences and ideas, you just cant ignore. Sometimes, I feel mesmerized when I see a very insightful blog and could not hold back to say “Is this also possible” Wao…

People ask questions, give answers, give suggestions….. It sometimes becomes so much lively, that you feel like you are part of a grand celebration.

I wish we could have some chatting options in SAP community.

Just as Michelle said, “It gives me a chance to interact with people I wouldn’t normally meet.”

If you could go to another world with a guarantee that you would be able to come back in a day, would you?  Why?

Yes, I would indeed love to travel to another world, because, I think it will be full of surprises and exploration as no one has done it before. I would then share my experiences (which people wont believe), It would be so much fun. I could then become the next Neil Armstrong.. who knows.

If you could have 2 months off of work to study a different culture – which one would you choose?  You would have to either write a thesis or help the culture and publish what you did.

Well, I would love to study some other culture, but unfortunately, being an Indian, I am unaware of many cultures in my own country. In fact India itself does not have a single culture, It comprises of infinite number of cultures, languages, ethnics etc.. that we are even fighting for secularism as well 😛 .

In particular, I would like to study the culture of South of India. South Indian culture refers to the culture of the South Indian states of Andhra Pradesh, Karnataka, Kerala, Tamil Nadu, and Telangana. The rich culture of South India can only be truly experienced by participating in its festivals, savoring its cuisine, knowing its architectural heritage, experiencing the charm of its beaches and exploring its destinations. The food of South Indian consists of fish, coconut, rice, idli, dosa, sambhar, uttapam and curries with lots of spice. Dosa being my favorite, its very tasty, not very spicy and easy to digest. South India is an abode of countless temples built meticulously and beautifully. Tourists from far and wide come here to explore the beauty of these temples. Some of the well known temples are Kapileshwar temple, Brihadeshwara temple, Meenakshi temple, Navagraha temple, Krishna temple and Jain temple. South Indian culture is full of festivalswhich are celebrated with utmost zest by the people here. Pongal, Onam, Dance and Music festival, Hampi festival and Fire Walk festival are a few festivals celebrated enthusiastically out of many.

If you were given the time to work on any development project you wanted – even one just for you – what would you work on?

Next up for nominations, (I wish I could have taken your consent before nominating you)

My questions – pick any you would like to answer:

How do you deal with criticism?

What is the most fun project you’ve ever participated in, and why was it fun?

What do you do apart from SAP in your free time ?

How do you balance your life between work and family/personal time?

How do you keep yourself motivated to learn and do more?

Great post Mohit Sharma . Did not know you are from Chandigarh and an ex Infoscion:) Keep up the great work!

Nabheet Madan, you have been a true inspiration for many fellow bloggers like me and you truly deserve to be the SAP Champion. 🙂

I hope my technical blogs too help the community as yours have been doing for so many years.

Thank you so much for your time to read my blog.

You are doing a great job. I just followed you can you follow back as need to discuss about one of the SAP community event for Pune ?

I am following you too.

(In case you need to contact me on LinkedIn)

Thanks for nominating me, will surely try to complete this by weekend 😉

Thank you Hemchand!!
Take your time writing the blog.  I sure did.  ?

BTW, It would be real awesome to go to another world 🙂  Hope someone invents portals to make this possible 😛 😀

Thanks Mahesh, I would invite you to do come and visit Chandigarh once, if you plan a trip to North. Its a one day event. 🙂

I wish someday, ISRO/NASA invites an expert like you to make a portal in UI5. 😀

I would definitely visit you and Chandigarh one day

Maybe to design a HTML UI5 based portal game  ?

Awesome Mohit. Great to know that you are/were also associated with Accenture and Infy.

Indeed, no place like Chandigarh, but Pune is also good if we consider the weather and compare it with other big cities.
As far as association with Accenture and Infy is concerned, I think I am following your footsteps; though in reverse order.
I wish someday, I will work with you in SAP Labs. 🙂

Loved the blog!  Pictures and great information about you.

Thank you for taking the challenge!

Thank you Michelle, I enjoyed writing it too. 🙂

Hi Mohit, and welcome to the #blogitforward family!  Your blog escaped my notice until today because it wasn't tagged with #blogitforward (which you can certainly change if you feel like it)  😉

I also wish we could have a chat option in the SAP Community - but then perhaps I would spend all my time chatting with people - and there goes my day job...

Thank you for sharing such beautiful pictures!

I have added the hashtag as suggested by you

You are right, I too would perhaps spend my time chatting with people…