In my previous blog post, I mentioned about DOCs. I also provided an example of a very basic unit test in that blog. I will extend the same example at the end of this blog. If you don’t understand certain abbreviations used here or would like to go through some basic concepts, then I would suggest you to have a look at my previous blog.

In this blog post, I am writing about test doubles in general and later mention how to handle the dependency in ABAP when the DOC is a database object.

Now let’s say that instead of taking the date of hire as an input from the user, our code takes Employee ID as an input. It then reads the date of hire of an employee from the database and calculates the years of service. In our development system we create the necessary test data before executing the tests. Later, when the unit tests will run, the query to access the database will also execute. The loaded test data will be fetched by the test case and all our tests will run successfully. So far, all okay. Fine!!

Now let’s say this entire set of code is transported out from the development system. This code will reach to multiple systems, where the unit tests will be executed in an automated mode. However, each system is set up for a specific purpose and thus have a specific set of authorizations and characteristics.

The point which I am making here is, not all the systems will have the required type of data in the DB. Not all systems have authorizations to read/write to the DB. Not all systems will have authorizations to access the file systems or interact with communication systems and web services. These are some of the problems which we face if we rely on the DOCs for executing the unit tests. Also, the unit is no longer in isolation if it interacts with DOCs, and the essence of unit testing is lost.

Sometimes the system is refreshed or the data in the database gets modified and consequently, the required type of test data is no longer available. Suddenly your unit tests will start failing and then you keep wondering as to why!!

Following are the difficulties which we normally face in testing the CUT where DOCs are accessed:

Thus, we see here that a test is not a unit test if it interacts with any DOCs such as:

Just keep in mind that, the moment you venture out of the LTC or access other UTM, your test is no longer a unit test, because dependency has been created.

How do we handle this? What’s the way out?

We need to do something which will restrict the CUT from accessing the DOCs. Clearly, we cannot modify the code lines in the CUT to remove this interaction. So, we need to handle this in the LTC itself. What if we re-direct the access of CUT to a mimic of the DOC, rather than the actual DOC?

You want to buy a flat and you visit the apartment to have a look at the flat you are interested in. Now, let’s say the actual flat is not available for you to have a look at. Probably because the apartment is still under construction, or it is undergoing some maintenance work. There can be some other such reasons too.

Now, I would like you to start relating this to our unit testing scenario. What does the agent / house owner do in such a case? He/she will show you another flat in the same apartment (maybe a sample flat), whose features are exactly like the ones you are interested in. So, now you will have a look at this flat and decide on your deal.

I hope you had a great time reading by the above situation!! Similarly, for unit testing we create a dummy artefact of the DOC, (say for instance, a database object). We create a test environment, which will enable the CUT to access this dummy object, instead of the actual object.

Let’s say that the DOC we are trying to access is a database table.

In effect, the dummy of a database table will behave similar to the actual ones, the advantage being that the data of these dummies are defined locally in the LTC itself and they have exactly the same structure and keys as that of the actual table. This dummy/mock of the database object is called as a “Test Double”.

Figure 2: Accessing the test double instead of the DOC using Test Fixtures

Depending on the DOC you are working with, there are ways to direct the dependency of the CUT to the test double, in place of the actual DOC.

My DOC is a database object. How do I create and access the test double?

To perform CRUD operations in ABAP, we use Open SQL (OSQL). One of the major advancements in OSQL is the code-pushdown capability. Execution of logic for OSQL statements takes place in the database layer instead of application layer.

The OSQL Test Double Framework provides capabilities to create test doubles for any database object, insert data in test double (i.e. creation of modifiable or insertable test doubles) and re-direct the interaction of the CUT to these test doubles instead of the actual database object. Consequently, this enables testing of all the OSQL statements in our production code, through the normal ABAP test classes.

This is difficult for certain database objects like database views and database functions which are read-only. However, the framework handles this through some modifications which enable insertion of data into their corresponding test doubles. 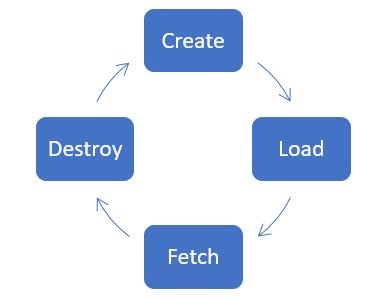 Figure 3: Process to use the OSQL Test Double Framework

As mentioned in the previous section, the test double should provide the same interface (point of contact) as the actual ones. This provision of the same point of contact is handled here in this step.

The class which provides the Open SQL Test Environment is cl_osql_test_environment.

environment = cl_osql_test_environment=>create( i_dependency_list = ‘list of all the database object DOCs’ ).

2. Load test-data into the test double

We have got an empty water bottle. Time to fill it with some water!!

What I mean here is that the test double created in previous step has no data and so has no use as yet.

As we very well know, internal tables are defined and loaded with data locally. So what we do here is, create an internal table of the type of our database table, and load the test data inside this.

mt_table_name               = name of the internal table, of type of the DOC database table. (by convention, “mt” stands for member table of class. You may use any other prefixes as per your standards)

You may or may not fill the data for all the fields. But the values for all the keys must be provided. Likewise, load the test data into all the required dependent database objects.

It is recommended to write this code in setup() or a UTM because:

When to write this code in setup():

When to write this code in a UTM:

3. Fetch data of double from the CUT

So now there’s some water in the bottle. Let’s use this!!

Now this test double will be accessed by our CUT, whenever the unit tests are executed.

We just need to invoke our production methods from the UTM. The redirection to the test doubles will be taken care automatically by the OSQL Test Double Framework.

It’s time to clean our water bottle with a cloth and let it dry.

In this step, we clear the data in the test doubles. For this we invoke the clear_doubles() method of our instance of test environment as below.

Keep in mind that this is just erasing off the data in the test doubles. The doubles still exist, however they have no data.

Destroying the test double should preferably be done in the teardown() method, as it is executed after each UTM.

I will extend the same demo use case of getting years of service of employees which I used in the previous example. For this demo, I will use a Z table, instead of a standard table. However, there are no changes in the approach.

Listing the artefacts for this demo:

Structure of ZEMPDATA_DEMO is as follows:

Global class definition is as follows:

This method takes an Employee ID as input. It then fetches the record of the employee from the database and calculates the years of service for that employee. The method signature and implementation are shown below: 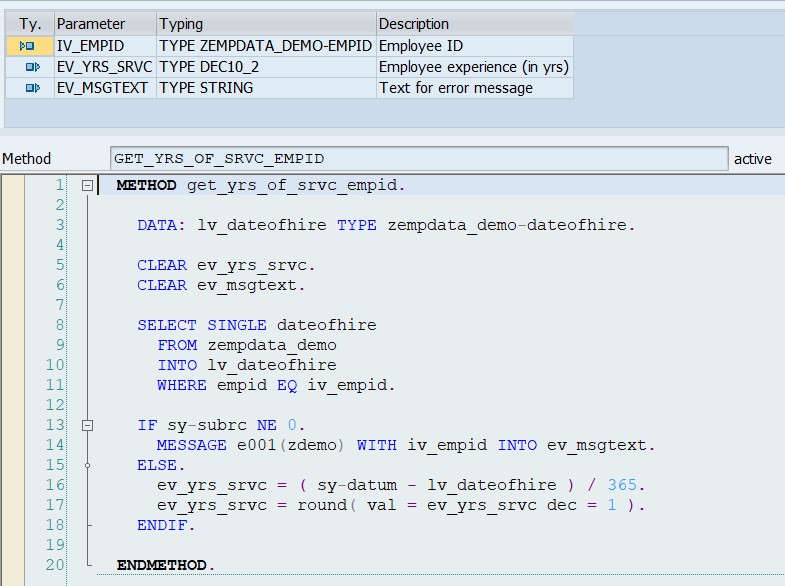 Let us find out the positive and negative test cases for this method:

This method takes a Line of Business and Designation as input. It queries the database to search for all the employees belonging to this line of business and designation. It returns this selected data along with the number of employees. The method signature and implementation are shown below: 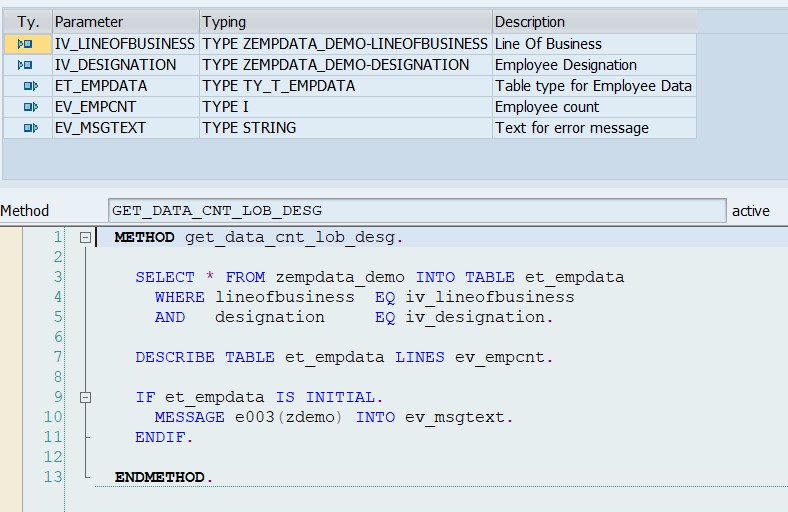 Let us find out the positive and negative test cases for this method:

Summing up, we have identified a total of 4 test cases for CUT. There can be more test cases here, but to keep it simple to understand we consider here 1 positive and 1 negative test case for both the methods as above.

I had provided information on certain parts of LTC in my previous blog. So here, I will be stressing more on the test doubles in the LTC, rather than the other details previously explained.

Let’s have a look at the definition of the LTC.

Line 5 to Line 8: The corresponding UTMs for each test case are defined in the public section of the LTC.

Line 11: Data definition for the test environment locally to redirect the access from the actual database object to the test double

Line 18: Declaring an internal table of the type of DOC database table. Since, ZEMPDATA_DEMO is the DB object which we want to mock. Test data will be loaded into this internal table in the class implementation.

Line 19: Declaring an instance of the CUT.

Let me now walk you through the implementation of the LTC. 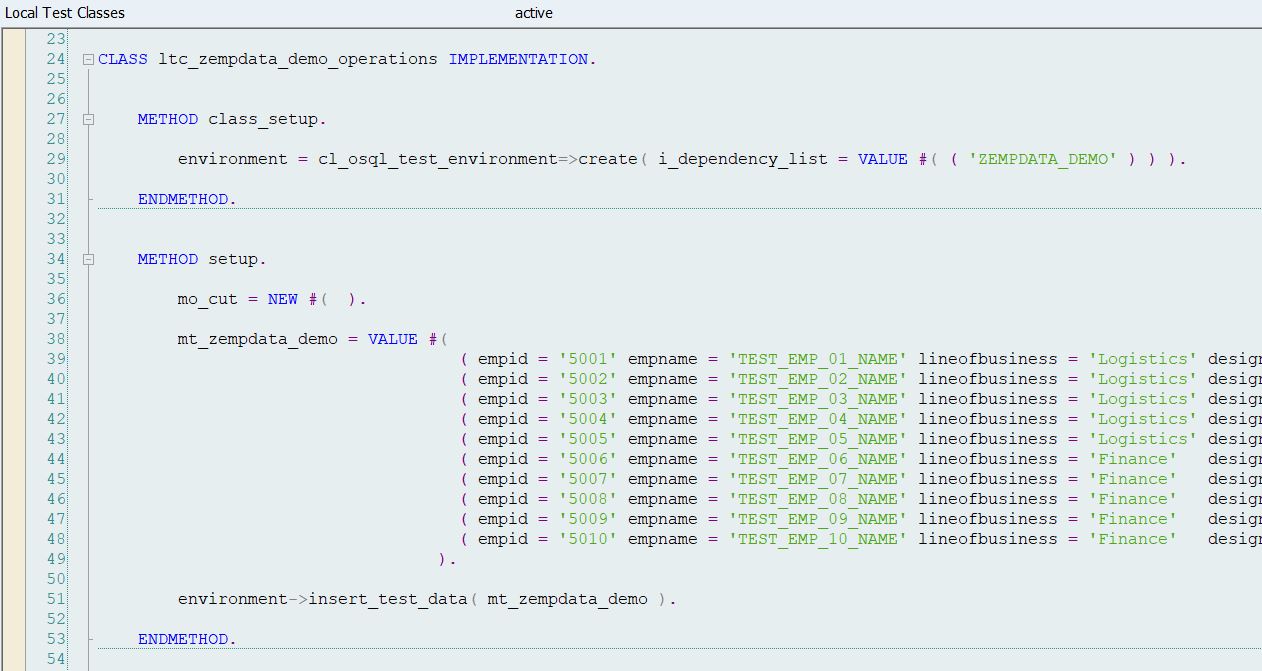 Setting up the test environment and creating the test double:

As seen previously, create() method of the class cl_sql_test_environment creates the corresponding test doubles for all the dependency objects listed as values of the parameter – i_dependency_list. We do this in the static method class_setup().

Line 38: We will load our test data in the internal table mt_zempdata_demo.

Below figures 10-13 depict the implementation of all the 4 test cases: 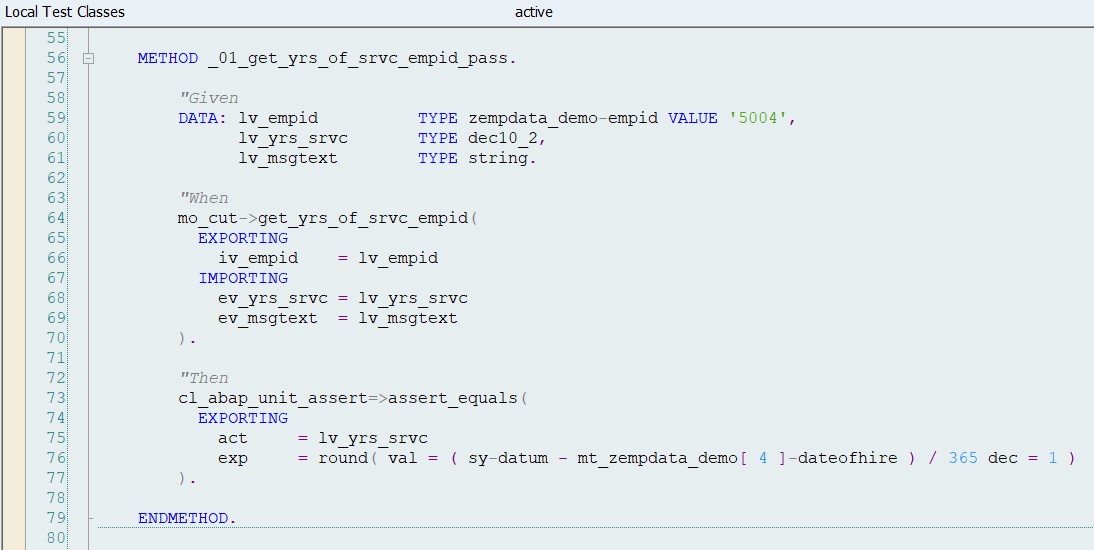 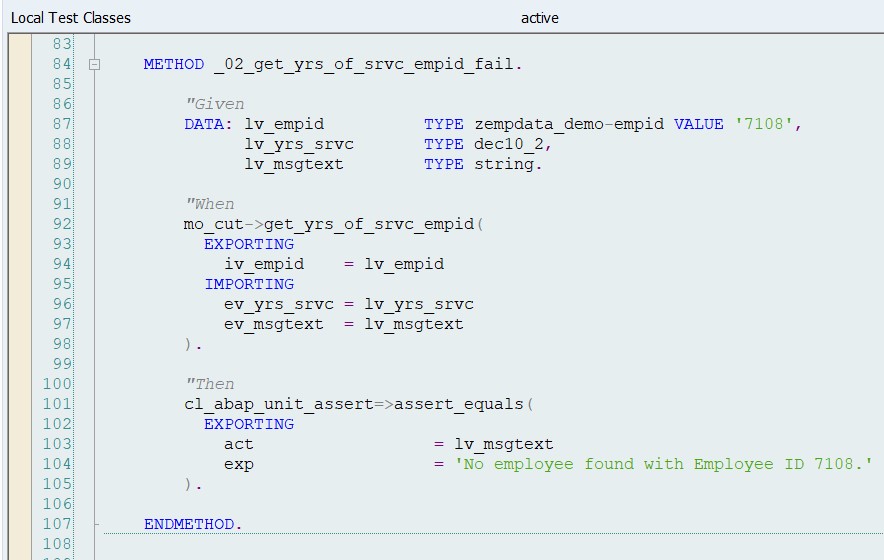 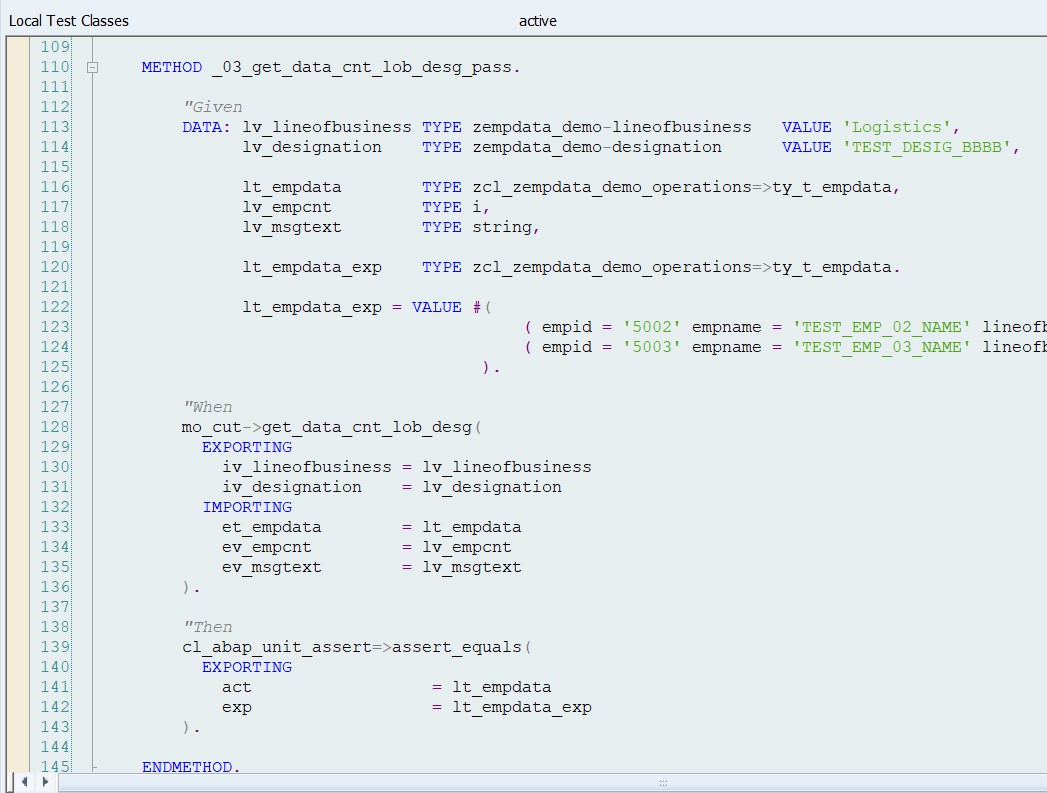 Line 113 – 114: For the method GET_DATA_CT_LOB_DESG, we need to pass the line of business and designation. So we set the required values of these parameters for this test case. The same is applicable for lines 151 and 152 in Figure 13 below.

Lines 120-125: We are going to receive the count and employee data. There may or may not be multiple records fetched (This depends on the test data which was set in setup()). So, we create an internal table local to this UTM with the expected data. This is used further for the assertion in the “Then” section of the UTM. 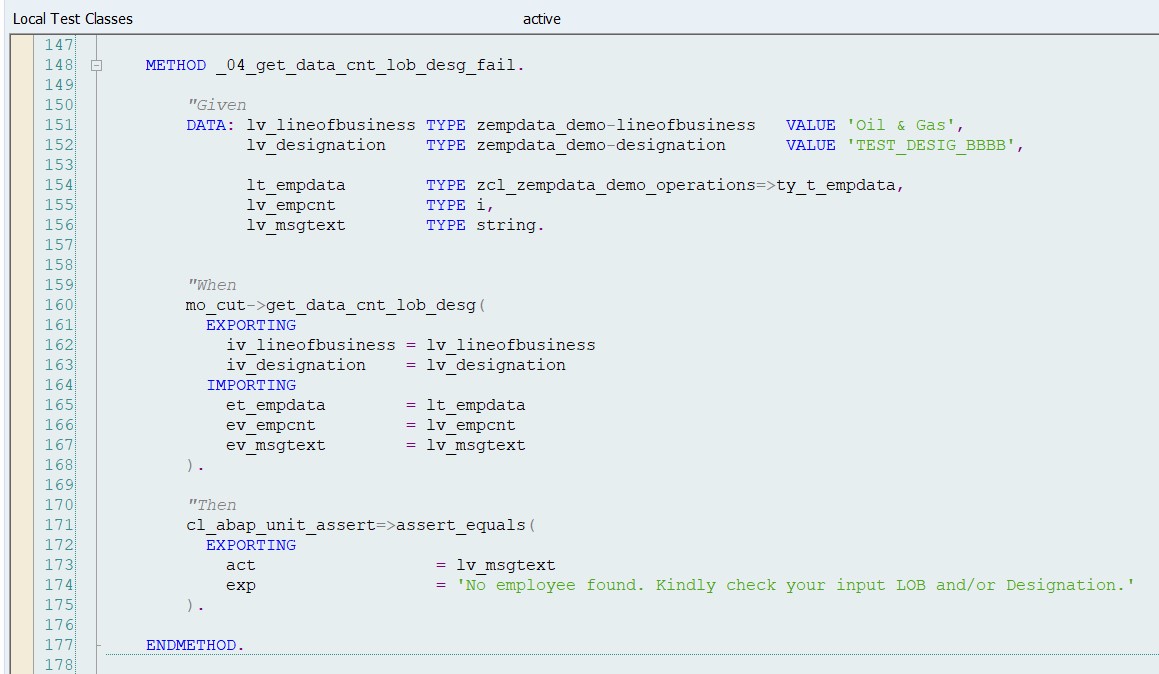 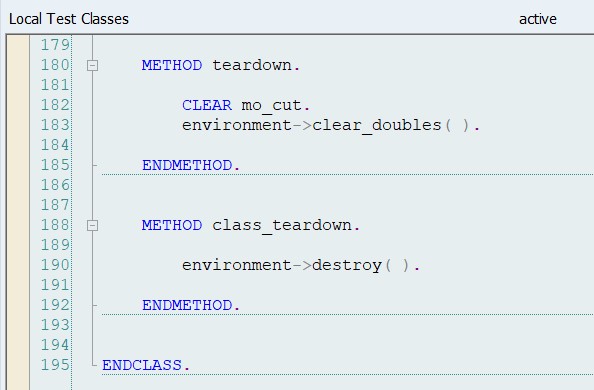 Line 183: Clearing the data of test doubles after every test case.

Line 190: Destroying the OSQL test environment, which we created in class_setup().

In my upcoming blogs, I will mention about performing unit testing in scenarios where other types of DOCs are involved.