When we think of a development cycle of a cloud application, this has certain common ingredients:

Since the SAP Cloud Platform Integration still does not fully support this scenario, there are the public OData API’s to fill in the gap, at least partly.

This blog first explains how we defined our development and staging workflow and then shows how I used these API’s by putting them all together within a Bash-based CLI.

We have three stages (three sub accounts) on the Cloud Platform. This is useful for restricting access to required roles and for staging specific scaling.

This takes place in the development environment. It is the only stage integration flows require to be in the design workspace because we have to use the integration flow editor. Each developer may have an own package to visibly separate from each other.

Start of the development

When starting the development on an integration flow, it is either created from scratch or copied from another package from the ‘Discover’ section.

When copied, the first action has to be to execute

which downloads the integration flow, creates a git repository locally and remotely via Bitbucket API and finally pushes the newly created repository to the remote.

Since there is already a bitbucket-pipelines.yml inside, it takes a couple of seconds and the integration flow is deployed within the development environment runtime.

Modify an integration flow or fix a bug

The integration flow might have been removed from the design workspace (we do not have to have them here because we stored them in the git repository). If that is the case, clone the remote repository or do

Apply the modifications to the integration flow. If done, execute

to push the changes to the remote repository. The integration flow might have been deployed in the meantime by the developer for testing purposes. Nevertheless, when the push occurs the pipeline finally deploys it to the development environment.

Bring an integration flow to the test stage

If this is the first time the integration flow is pushed to the test stage, a branch ‘test’ has to be created and prepared. This is done by cloning the repository or do

Now the file src/main/resources/parameters.prop has to be modified so that all staging specific variables like endpoints to the Commerce Cloud match those of the test stage.
That file contains all externalized parameters that are defined using the integration flow editor.

Now the pipeline deploys this integration flow to the testing stage for the first time.

For subsequent merges into the test branch execute

instead of creating a new branch.

If modifications on the parameters.prop file have been applied in development, this always requires a manual merge conflict resolution. The developer should be careful when doing this!

Bring an integration flow to the production stage

This is almost the same as to the test stage except that we name the branch ‘release-<version>’. We can work the supportive function of the git hosting environment like branch protection or manual intervention when executing pipelines.

Parts of the CLI and their API counterparts

There is the main entry point called scpi which directs to concrete scripts with the functionality. We also have an scpi-completion.sh to support the user by typing tab twice to get sub-command or argument support in the shell.

The following arguments are necessary to enable authentication via OAuth2. Once given, they are saved for subsequent invocations within $HOME/.scpi/config

The scripts support to kinds of the OAuth flow, one that can be used by human users from their shells and the second which is meant for the continues integration pipeline.

OAuth authentication of a human user

The flow contains a redirect URI that is hit after the user has authenticated himself at the Cloud Platform. It is a very simple web server in C that is launched by the authentication part of the scripts and stopped after the authorization code has been grabbed from the log file. 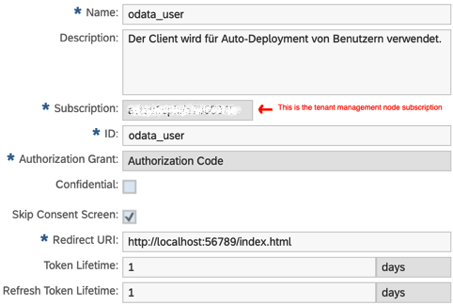 OAuth authentication within the CI

This scenario requires a secret and a password which is configured within the pipeline execution environment. In my case this is Bitbucket. 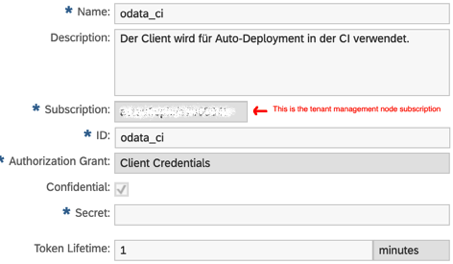 Below is how it looks in Bitbucket. I use a custom docker registry to pull a thin image with the CLI built in and the variable DEPLOY_CONFIG that contains a base64 encoded file with all the necessary secrets and passwords for the stages.

This is a sample content of the deploy config file:

This lists the packages of the design workspace.
Unfortunately, there is no public OData API to get the design time artifacts. Therefore, I used the same API which is used by the Cloud Platform Integration web application. Since OAuth authentication is impossible here, we have to type user name and password.
While listing the packages, their ID’s additionally are stored within $HOME/.scpi/packages so that they can be used by the bash completion script. (If those API’s would support OAuth2, this won’t be necessary.)

This lists the design time artifacts in all packages. A package ID can be specified to list only the artifacts of that package.
While listing the artifacts, their ID’s additionally are stored within $HOME/.scpi/artifacts so that they can be used by the bash completion script.

With this command a design time artifact can be downloaded. The corresponding API is GET /IntegrationDesigntimeArtifacts(Id=’{Id}’, Version=’{Version}’)/$value

The downloaded zip is extracted and by default copied to the directory $GIT_BASE_DIR/iflow_<artifact_id>. The zip program asks you to confirm overriding existing files which we normally do because this is a git repository which gives us all tooling to compare with previous commits.

This can be used to create an artifact within the design workspace (the used API is POST /IntegrationDesigntimeArtifacts).

<Artifact ID> – when pressing tab for completion, all local artifacts (directories starting with iflow_ within the configured workspace root)

<Package ID> – when pressing tab for completion, the packages saved in $HOME/.scpi/packages are presented

[Artifact Name] – if not specified, this is the same as the artifact ID

[Folder] – the directory to read the artifact from. By default, this is $GIT_BASE_DIR/iflow_<artifact_id>

With this command, it is possible to only have the integration flows within the design workspace which you currently work on.

This lets you delete an artifact from the design workspace. It corresponds to the API DELETE /IntegrationDesigntimeArtifacts(Id=’{Id}’, Version=’{Version}’)

This lists all deployed artifacts corresponding to the API GET /IntegrationRuntimeArtifacts

Triggers the deployment of the artifact uploaded. This corresponds to the API POST /IntegrationRuntimeArtifacts

This enables us to deploy artifacts without having them within the design workspace.

This was an overview how the OData API’s can be used to create a developer workflow which better fits to what one might be used to from other cloud environments.

There are more functions included like message processing logs display or endpoint invocation (with another OAuth client involved because this needs other permissions), but that would exceed the scope of this article.

thanks for this useful insights. I couldn't think of a better workflow. Well done! Do you plan to write more articles on this topic? (Maybe with some insights into your scripts?)

If there is an interest, I can publish more articles about the topic.

I will check back with the customer - maybe I can even release the source to the public.

The source repo with the implementation is here: https://github.com/uvoigt/scpi-ci-tools