Update 1: 6th of May  – Latest updates  post release of solution for all customers

Starting June 2020, it would be legally required in Switzerland to generate a QR Bill payment part for all outgoing invoices. The SAP solution for printing QR Bills of SD invoices has been released in the collective note 2910269. The solution will enable you to generate a legally compliant print out adhering to the style guide published in the Swiss payment standard website

This blog post would be helpful if you are not directly using the SAP standard solution and doing a custom implementation for QR Bill Invoice printing.

As a part of the standard solution SAP has delivered certain templates and routines and I will explain the end to end process for handling the QR Bill invoice printing.  Based on your requirement, you can decide to simplify the custom implementation activities based on the recommendations below.

Step 1 : Creation of the Form Template

Pre-requisite for developing a  Output Form template is defining and developing a Data provider. SAP has delivered a reference XFA Form interface as well as  XFA2 OData  based Gateway Service as Form Data Providers (details in Note 2910269), which could be copied/reused/referred to when creating your own Form Data Provider. The SAP design was to split the data provider into 2 parts to give a direction for customers when developing custom forms to only adjust the deltas while transitioning  from ESR regime to QR Bill regime. 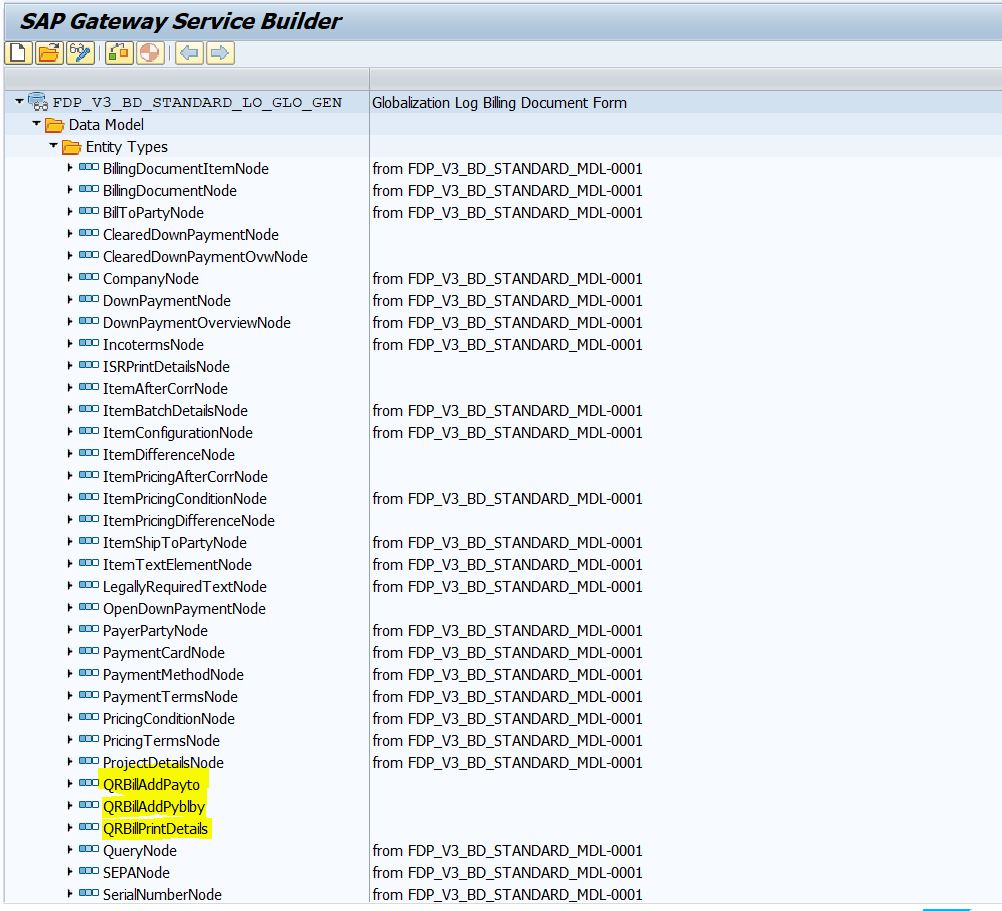 The XFA2 gateway based service can be delivered by release/support pack only. If you are not planning to upgrade to the latest support pack, via SAP notes only the interface based SAP standard form would be available.

QR Bill Style guide explains different ways/formats/languages in which the QR Bill could be printed.

To achieve this, certain control parameters needs to be added in the Form Data Provider to dynamically adjust the layout. This logic for such dynamic layout adjustment based on configuration T049Q should be done at the layout script level. Reference can be taken from SAP delivered standard forms

SAP form strategy is to deliver only Adobe forms as standard solutions. For QR Bill, SAP has delivered a reference QR Bill invoice adobe form template as described in note 2910269.

SAP’s approach for achieving the fixed size QR Code with the Swiss Cross, was using an Image Element in the form rather than a Barcode Element. There are limitation in SAPscripts and Smartform technology to achieve a the Swiss QR code, either by the image approach or the barcode element approach

Update : To overcome these restrictions in SAPscript and Smartform, SAP has provided design/implementation recommendations in the consulting note 2937591.  The following steps would be helpful only if you are using Smart forms or SAPscript for the QR Bill invoice. The High level design block for achieving the style guide specifications are as follows

Create the QR Code in BITMAP format passing the invoice data and certain fixed QR Code generation control data as shown in the code block below. This would be the same routine as explained for Adobe forms in the prior sections

The QR Code Output should be re-scaled based on the Print resolution. If the print resolution is 600 DPI, to achieve a 46*46 mm QR Code, it should be scaled to 1087*1087 pixel. This needs to performed every time as the data input to the QR code generator might vary in character size. Based on the character size, the bar code rendering utility would return an image of variable size.

Following is the sequence to adjust the dimension

The Official logo downloaded using the link, available under https://www.paymentstandards.ch/de/shared/communication-grid/swiss-qr-code.html, has a white background. Smart form interprets this as transparent and doesn’t completely cover the QR Code. In the note 2937591, you can find a .BMP image file attached, which overcomes the problem by performing the following

With the restriction of using only Static images for form rendering, the QR Code image needs to be uploaded via program logic in the print program, each time the form is rendered. Separate SE78 image object space in the application layer for QR Code Image. Every time the QR Bill is printed, this space is used for uploaded, overwriting the QR Code image. Optimized coding example is explained in the note 2937591

And in the Smart form script,  at specific positions When the Output is triggered,( i.e, the created output item is completely processed) can also be configured. Generally, this should be done when the SD Billing Document is release to FI. In the NAST based output management, this is handled via procedures and routines and in the APOC output management it is handled via Output relevance setting as shown below

This is an overview of the end to end process and development cycle to generate a compliant QR Bill Invoice.

Additionally to cater to requirements pertaining to selection of separate printer tray for printing the payment part, SAP has a design approach and recommendation

I would be interested to know about gateway based Adobe forms if we can use it for a custom adobe form.

Do we always need to refer a standard form if we want to use odata based forms?

You could create custom adobe form (layout ) reusing the SAP delivered Gateway Service as form data provider. This is the approach, most customers use in S/4 HANA Cloud and On Premise.

You could always refer to the standard form, just to reuse the same form layout elements, to avoid any issues when using the SAP delivered gateway Service.

thanks for this detailed Information. I tried to open OSS-Note 2874819 and failed with message:

You are not entitled to access SAP Note/KBA 2874819. The target audience for the SAP Note/KBA you were trying to reach does not match your profile.

Hi Raghavendra ..thanks for posting this ..As Dirk said we are not able to check note  -2874819 as this is not released ..any idea of other sap notes which will be useful for ECC system

The note 2874819 is currently being tested a few select Pilot Customers. We would be releasing the note in the coming weeks to all customers.

Could you please let us know about generating and printing of Swiss QR code for SAP Scripts also?

Are there any pre-requisites and/or other SAP Notes to be implemented?

Is there any specific Note for the Swiss-QR Symbology, for example?

There are restrictions with SAP script technology and I have included a section in this blog for the same. We would recommend to go for Adobe forms for QR bill Invoice form due to the limitations.

Thanks for the post but still its Note 2874819 is not available for customer ..

We check above note but our system is lower level of support packed and this note has hundreds of per-requisite notes and either imp these note or support package upgrade is not possible ..

About the pre-requisites, we have removed the redundant dependencies and collated the information about the set of notes to be implemented with the sequence in this collective note.

How do we incorporate Swiss QR code in Adobe form layout? It is not available in QR code templates in Object Library.

I have now updated this blog with information on SAP design for the QR Code generation in the form layout. As explained, we would need to characterize the QR Code as an image element with super imposition of Swiss Cross.

Do you know something about the MIRO functionality in regard to QR-Bill for Switzerland?

How do we activate there and how to handle in MM the new functions?

Maybe you have a hint for me regarding the QR Code functionality for MIRO?

can you give us an update regarding the general availability of SAP note 2874819? Or is there any chance to become one of the pilot customers for this topic at this point?

To my knowledge, RE-FX template is still under development and you could track the changes in the "Legal Change Notification" app (link)

Dear Raghavendra, thank for you information, in Jam forum SAP answer the solution will be release on November 2020.

Is there a specific solution for printing of a Dunning notice based on SAP script form and with QR code printed just like the invoice. Would the process be similar to what you have explained above for invoice printing? Only difference being the changes would be needed in the dunning print program. The logic for QR code itself and the superimposition of logo would remain the same?

Thanks for the post. As per Snote 2937591, I have tried implementing the attachment Z_CH_QR_DEMO.zip. But the driver program given is not getting activated due to missing class "CL_SWISS_QR_REF".

Could you please suggest the process of getting missing class in our system.