The primary focus of this article is on the various ways to integrate SAP Conversational AI into your IT landscape while maintaining data privacy and security. We’ll look at a few scenarios where the user has data in an on-premise environment with varying data privacy constraints.

The sentence entered by the user is referred to as an expression.

A keyword that is extracted from an expression.

An intent is a collection of expressions that mean the same thing but are constructed in different ways. Intents are the heart of your bot’s understanding. Each of your intents represents an idea your bot can understand.

If you’d like more information about these concepts, you can find comprehensive product documentation here.

To better understand how SAP Conversational AI fits into your IT landscape, we need to start with the various pieces involved:

The diagram below will help you understand how these pieces fit together. We’ll go into these interrelationships in more detail further down the article. 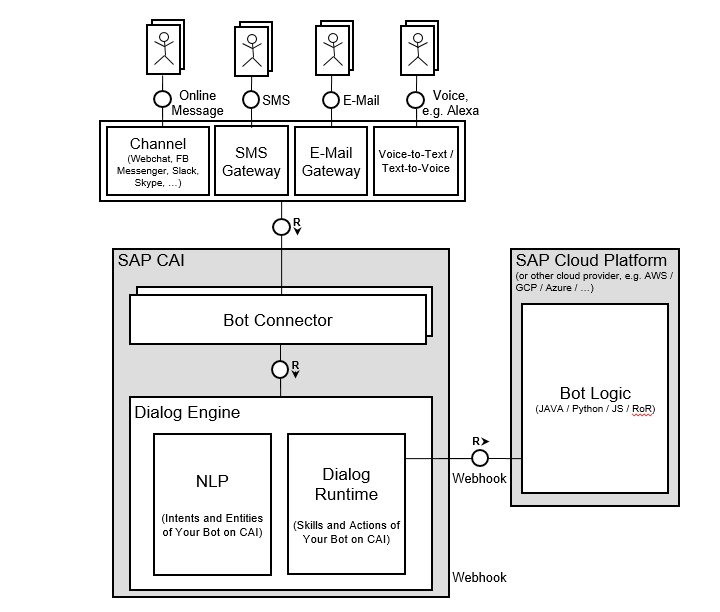 The NLP engine uses artificial intelligence to better understand users, regardless of how the sentences they enter are phrased. In the past, chatbots relied on a rule-based framework that required specific queries to provide results. However, this approach was cumbersome, inefficient, and didn’t scale well. The NLP engine extracts and returns actionable data, including recognized intents, entities, and user sentiments from expressions.

The Bot Builder sometimes referred to as the dialog runtime, is the graphical user interface (GUI) where you can build out the conversation flow. Simply put, this is where you tell the bot how to respond once we know what the user wants. The Bot Builder provides an intuitive user experience with a drag-and-drop (no-code) environment that accelerates the development process.

The bot logic is a middleware application that can be hosted on SAP Cloud Platform. This application is responsible for:

The bot logic can be written in the programming language of your choice and must be exposed as a Web API.

The Bot Connector is an adaptor that helps SAP Conversational AI connect to various communication channels such as Slack, Skype, and others. For a full list of channels, see the section of the product documentation. Important note: The Bot Connector can be entirely redeveloped on-premise to meet custom requirements.

Now that you understand the pieces involved, we’re going to look at various implementation styles. Here are the key factors you should think about when choosing the style of implementation: 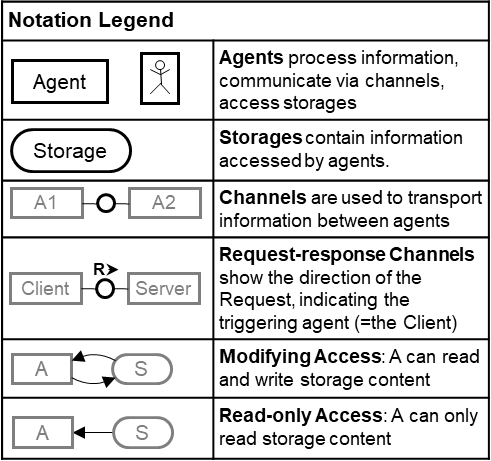 In this example, we’re looking at the implementation that requires the least amount of development work. This company has the following needs: 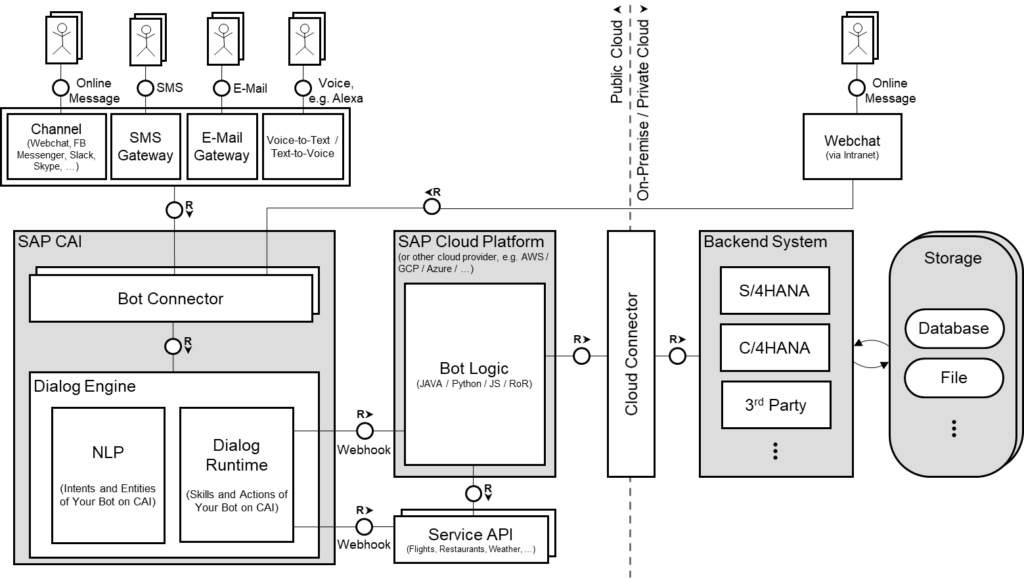 Now I’ll walk you through the process from start to finish.

The user enters an expression in one of the channels shown below:

The expression goes into the Bot Connector and gets translated into a format that SAP Conversational AI can process. 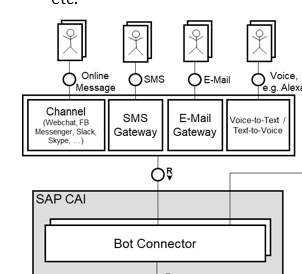 If the conversation requires information from the back-end system to continue, the dialog engine calls the bot logic from SAP Conversational AI.

The bot logic receives information as a JSON package. 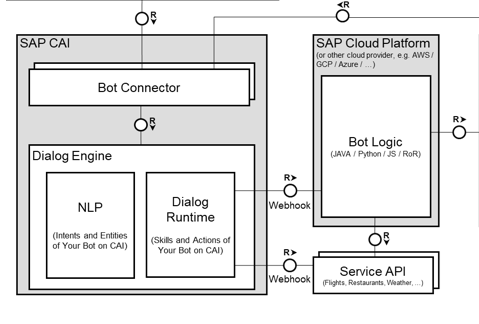 To expose the data from your back-end system in a safe and secure manner, OData services can be exposed from your storage through services such as SAP Gateway. SAP HANA Cloud connector will allow you to do this without opening ports on your firewall. If your database is in the cloud, you don’t have to worry. You can directly connect your bot logic to your data if you expose it as a Web API.

Key points of this approach:

The standard implementation approach exposes your data to the cloud. SAP Conversational AI has built-in data protection policies to help ensure you comply with GDPR.

Identity protection in this approach

You can enable single sign-on for identity protection and to make sure people have access to only the information they are permitted to see. Here’s a great blog providing step-by-step instructions to enable SSO with SAPConversational AI.

This approach results in the least public cloud exposure and is primarily used for augmenting applications hosted on your intranet. The architecture can also prevent any sensitive data from being exposed to the cloud. This would be ideal for a private cloud or on-premise customer who wants minimum cloud exposure. B it uses less of the prebuilt content, this approach requires more development effort. To reiterate: This approach is only suitable for internal use cases. 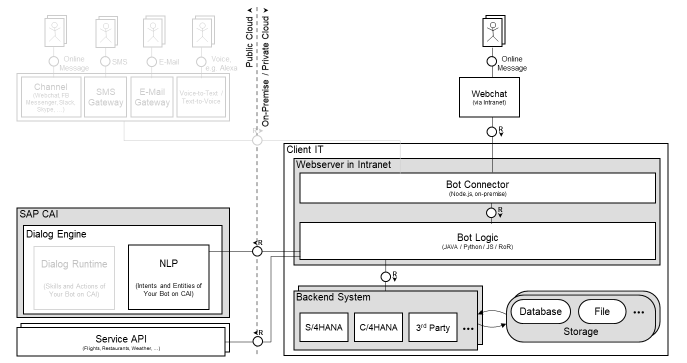 In this infrastructure, almost the entire chatbot ecosystem remains within the client infrastructure, whether that is on-premise or in a private cloud. Now let’s dive into how this architecture works.

Webchat will be your on-premise channel for users to communicate with your bot, so the first step is for you to enter an expression “X” in the webchat.

Once the webchat receives an expression, it routes it to your on-premise Bot Connector:

The Bot Connector then transfers the expression “X” to the bot logic.

The NLP engine sends a response with the intents and entities. Once the bot logic receives this, it can move the conversation forward with an appropriate response, which sometimes requires back-end API calls to the on-premise database or back-end system.

This is entirely an on-premise setup, where the only instance of the data leaving your firewall is in the form of an API request to the NLP engine in SAP Conversational AI to extract the intents and entities.

Key points of this approach: 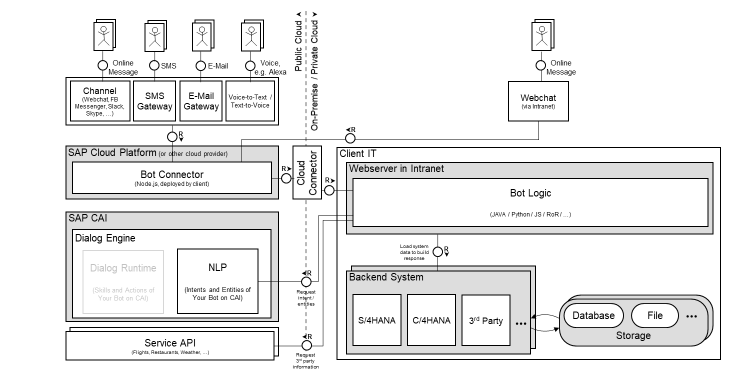 This implementation style is perfect if your goal is to avoid exposing OData services from your back end. The major differentiation is that you host the bot logic on your on-premise system, ensuring that your back-end data never has to leave the on-premise network. Now let’s dive into how this would work:

The NLP engine in the cloud to extract entities and intents from the expression.

SAP Conversational AI is developing rapidly, with updates every quarter designed to make integration with SAP and security processes even easier. For more information on the implementation styles presented here, feel free to leave a comment below or go to SAP Answers.