What makes you tech? – Impressions of Data Natives 2019 Berlin

What makes you tech? That was the motto of the Data Natives conference 2019 (Twitter hashtag was #DN19) which took place at the 25th and 26th November in Berlin.

Together with my SAP colleagues Lukas Masuch, Paul Opuchlich, and Patrick Müller I was able to attend the conference. We even met a colleague from Wroclaw, Vitaliy Rudnytskiy, so besides the content a conference is always a good place to meet people.

It was great to run into more #SAP colleagues at #DN19 working on #MachineLearning projects and contributing to #opensource, like @MLTooling or @OrientDB 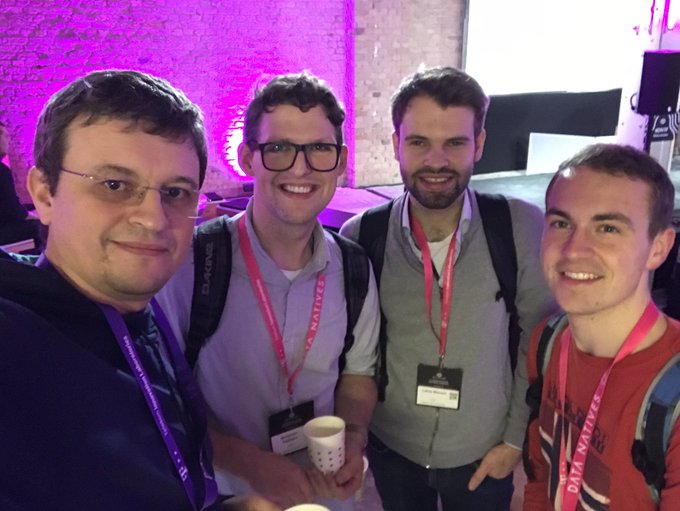 The conference setup consisted of five stages and the content of the talks was quite mixed, from technical to more societal questions such as the future of work or climate questions, presented by a Friday’s for Future member, to startup- and business-relevant topics. I am going to summarize a few of the talks to give an impression of the conference.

The talk “Just Evil Enough: How subversive thinking drives business success” by Alistair Croll (Twitter; LinkedIn) was about how to find the one trigger for your idea that catapults it to top, even if it means to exploit existing boundaries to a certain degree. He calls it zero-day growth exploit. I found a medium article that is related to the talk he just gave here. As one example, he mentioned the Facebook game FarmVille which figured out that it was able for the app itself to post on the timelines of players’ friends. At the time Facebook forbid this behavior, FarmVille already had a few million users. Did FarmVille know that posting on players’ timelines could upset people? Probably. But yet for them it was a huge multiplicator, so they rather said sorry than asking for permission, while actually being not too evil.

One sticking slide was the one about Wikipedia. Today’s world is about fighting for people’s attention. Wikipedia is one of the greatest achievements of mankind, the knowledge of the world collected at one place at great quality accessible by everyone for free. Yet, every weekend Americans alone spend as much time of watching commercials as it took to create the version of Wikipedia in 2010.

Raffaela Rein (Twitter; LinkedIn) talked about New Work and how she managed to improve her company’s culture significantly. The talk seemed to be based on this post on LinkedIn from her where you can find more details. One of the successful tools she described is a feedback philosophy called Radical Candor.

“A management philosophy based on Caring Personally while Challenging Directly.” – https://www.radicalcandor.com/ 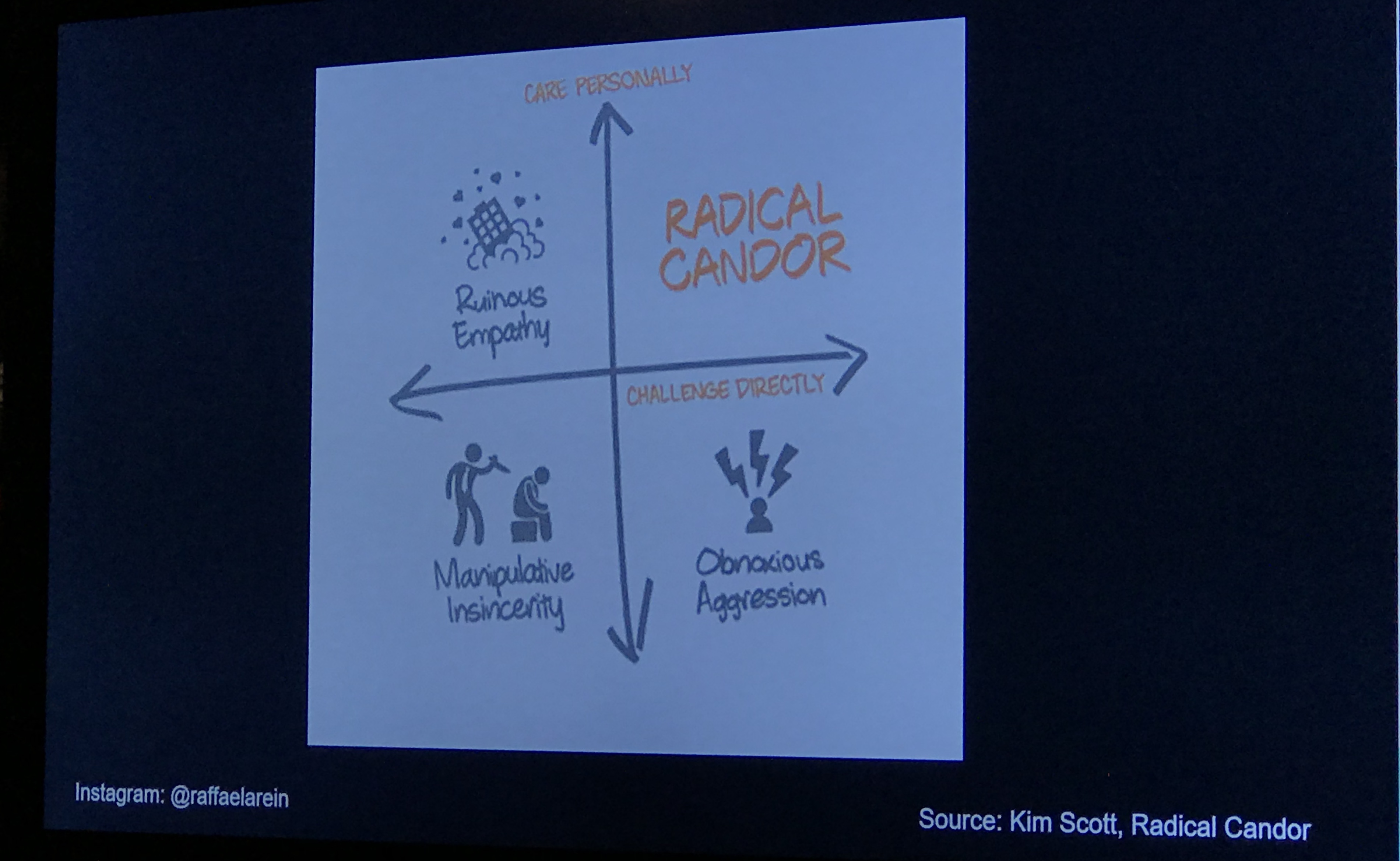 It basically says that challenging feedback can and should be given if you care about the receiving person. An example she gave was that telling somebody that there are food rests between the person’s teeth can lead to an awkward moment. Yet, not telling the person and letting the person walk around the whole day like this is not doing a favor either. So, it’s about giving challenging, unpleasant, direct feedback but with the other well-being in mind. On this note, she showed an interesting statistics from Google search: a lot more people search for “How to give feedback” than for “How to receive feedback”. For a working feedback culture, both parts are equally important and this gap has to be considered and closed to get to a productive point where the most is made from feedback. 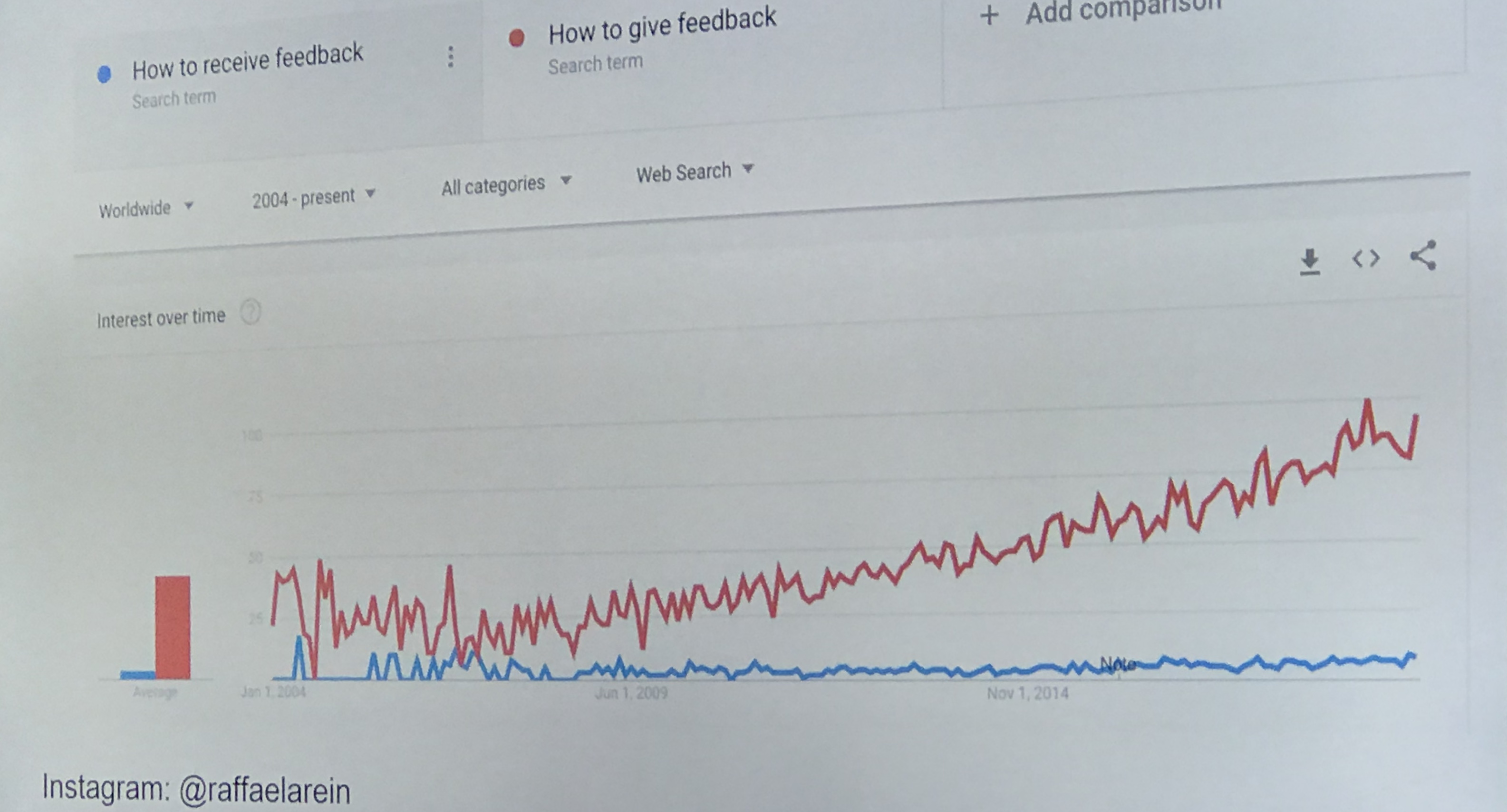 The topic of knowledge graphs – here presented by the startup Structr – was also present at the conference. 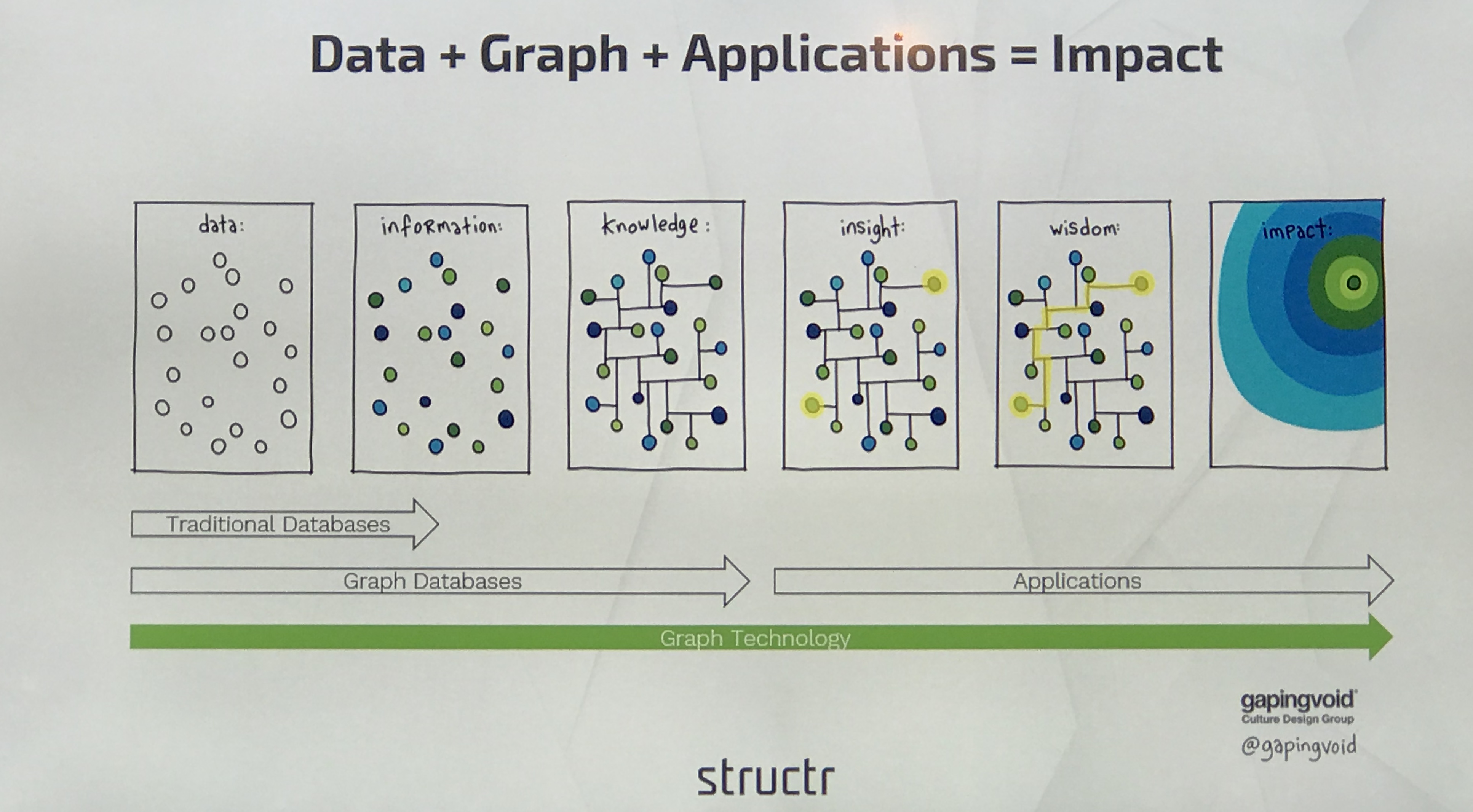 As advocated by my team and our work for years, the value of connected information can be huge if used correctly. This became also clear by the IBM talk given by Jacqueline Neef about how they worked together with the financial authority BaFin to detect money laundry detecting connections between actors and events using graph technology. 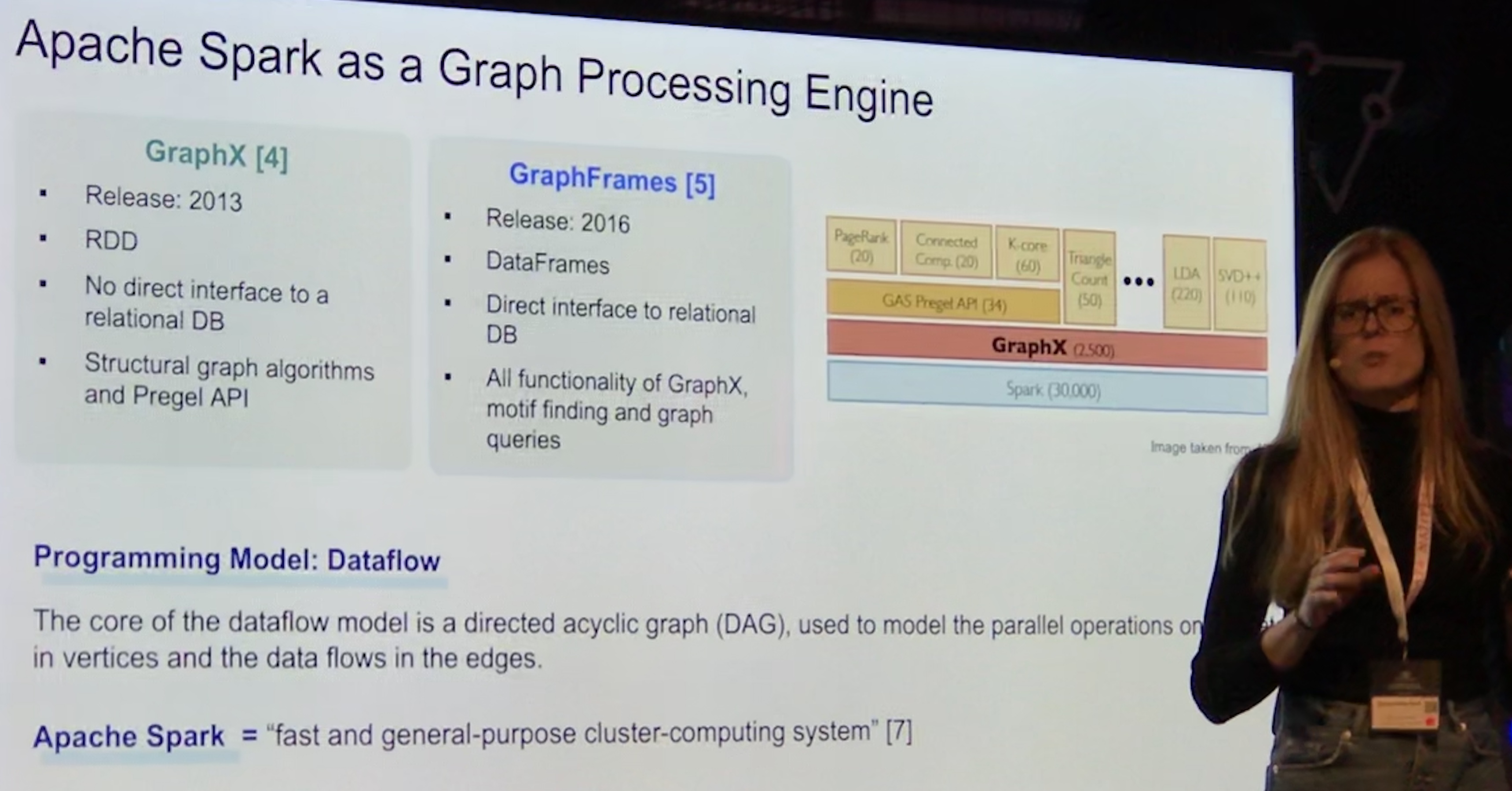 Ole Bossdorf from Project A explained in his talk in which stage a startup should have which degree of focus on data. From manual reports to standardized ones to making data-driven decisions and finally embed data into all relevant business processes.

In the data science category, Fabian Abel shared his experience and expertise of building a recommendation engine at XING. One part of the setup is how to update models and evaluate whether or not they improve the recommendations. The flow can be seen in the next picture. 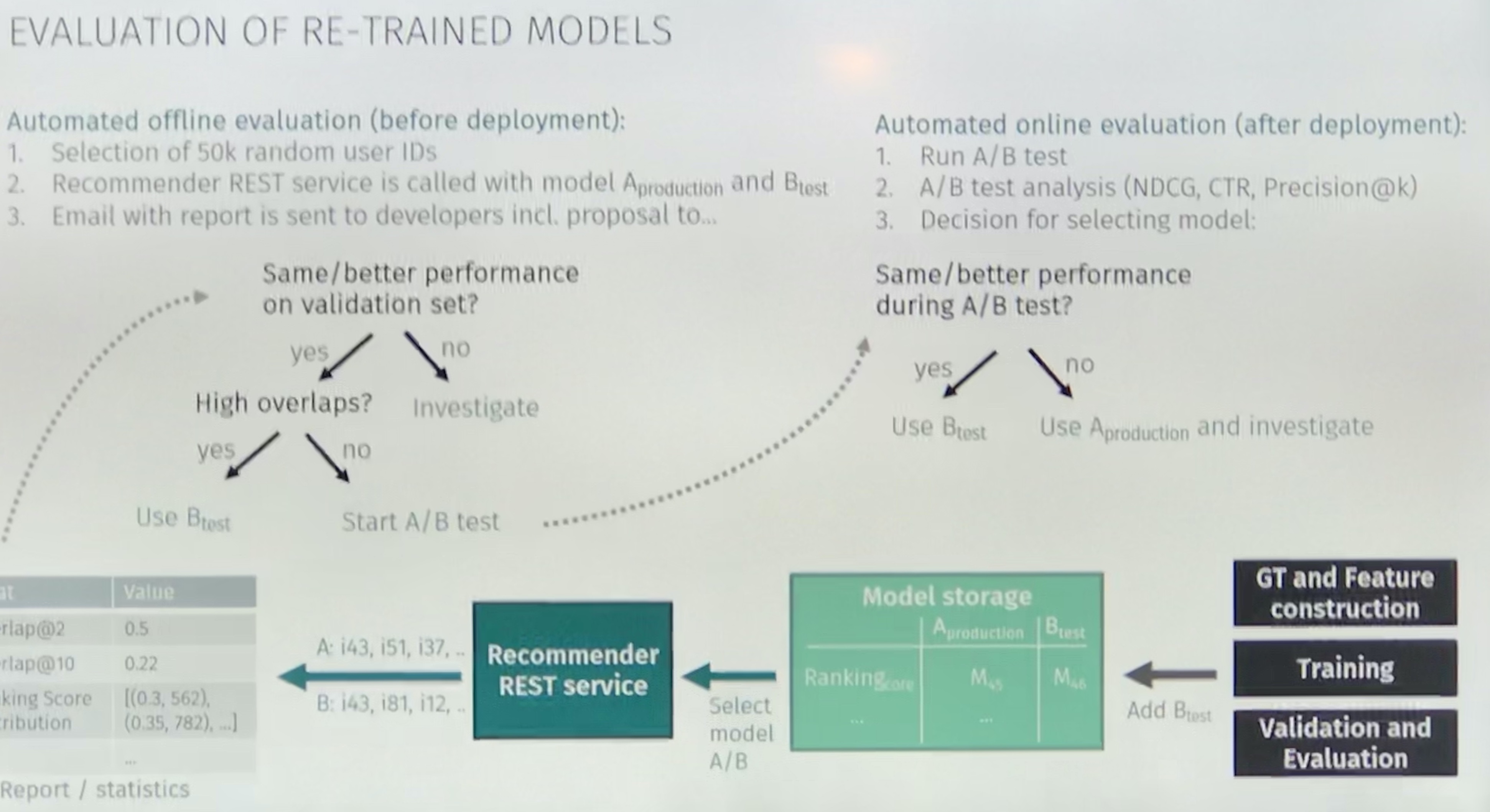 For me it was quite interesting to listen to a few talks about machine learning infrastructure, as it is directly related to my day-to-day work. One tool that popped up a few times was KubeFlow, a pipeline tool focused on machine learning based on Kubernetes, developed and open-sourced by Google. 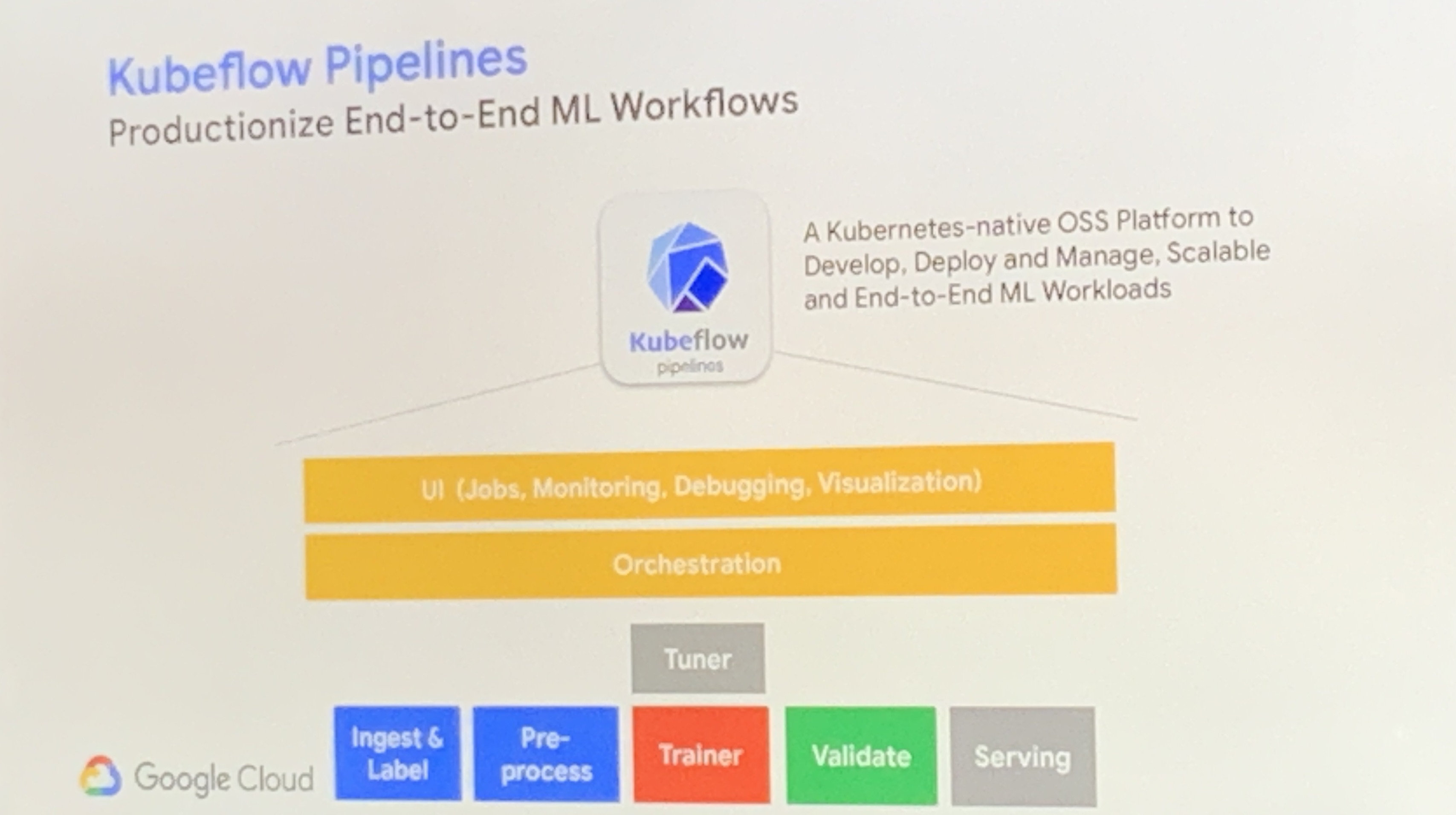 By the way, if you are interested in machine learning infrastructure, feel free to check out this GitHub repository: https://github.com/ml-tooling.

For the conference in general, there are a few aspects that could be improved like, for example, that one of the stages’ schedules was too early, so that you basically missed the talks if you sticked to the conference app. Also, the talks in the app had no descriptions, so you did not quite know what to expect. Further, I found the food and drinks quite pricey for a tech conference; also at the last evening everybody with the app got a notification for “free beer” downstairs just to find out that it cost 3€.

Yet, it is very challenging to plan and execute a conference on this scale – if I remember correctly, it was mentioned that around 1200 participants were there. Overall, the location was nice and there were some great talks in a variety of different fields, in the sense of the conference’s question “What makes you tech?”.

If you want to share your experience or have feedback, I would be happy to hear about it.

Really interesting article Benjamin and I totally agree with your point of view of the event.

I attended many talks from the IBM stage and I like to mention the presentations of Romeo Kienzler as well about "Trusted AI Building Reproducible, Unbiased and Robust AI pipelines" and "Towards de-facto standard in AI: What's new in Tensorflow 2.0 and KubeFlow".

He talked about the very important topic of reproducing model results, using the results in a productive setting with KubeFlow, and applying the new changes of version 2.0 in Tensorflow. These changes will significantly improve the deep learning experience of data scientists and in my opinion, close the current advantage gap of PyTorch in this area.

I really enjoyed his presentation style, as he showed hands-on examples and had a clear and structured slide design.

Hi Benjamin (and Paul Opuchlich, and Lukas Masuch 🙂 ). It was nice meeting you as well!

Thank you for sharing your experience at the event and see you next time.