Recently before installing SAP HANA on certified server, I thought of running SAP HANA Hardware Configuration Check Tool on the provisioned server. The latest available HWCCT version in service marketplace is 244 and I have used the same to perform the check.

NOTE: I have also used version 242 and the details provided below are encountered in both the version.

NOTE: This file is only available in HANA 2.0 SPS 04. You won’t be able to find this file in lower HANA database version.

After that, above error got resolved. But now during landscape evaluation I encountered below error –

There is no SAP Note which addresses above issue. At first I thought there might be some additional pre-requisites as I’m using recently certified SUSE version (SLES 15 SP 1) but I could not find any. I raised message to SAP and found that – Its a programming error which is reported since HWCCT 242 and 244 version.

Also SAP HANA Hardware Configuration Check Tool (HWCCT) has been end of life-cycle (EOL) on Aug 1st, 2019. So now no further releases or patches will be provided to accommodate its fix. (As per SAP)

A new SAP HANA hardware and cloud measurement tools (HCMT) is or will be introduced as a replacement of HWCCT. I could not find any official announcement of this tool but as per SAP, HCMT will be an official tool to check server before deploying HANA system in future.

HCMT is available for download in Service Market Place, so thought of giving it a try. Below is the official SAP Note for this tool –

Download the pdf attached in above SAP Note as it gives details on the usage of HCMT tool.

The SAP HANA hardware and cloud measurement tool (HCMT) allows customers and partners to collect information on the infrastructure intended for SAP HANA deployment. The tool measures whether the planned hardware or cloud system complies with the requirements defined by SAP.

Furthermore, it gauges whether the system planned for SAP HANA deployment can achieve satisfactory base performance by meeting the minimum requirements defined as well as satisfactory overall performance given the intended SAP HANA usage.

The measurement results are saved into a single file, which can be uploaded to the SAP HANA hardware and cloud measurement analysis for further analysis and reporting.

NOTE: SAP HANA hardware and cloud measurement tools are based on the requirements of SAP HANA Platform 2.0 or newer. For older SAP HANA versions, refer to the SAP HANA Hardware Configuration Check Tool

You can download the tool from the SAP Support Portal at https://launchpad.support.sap.com/#/softwarecenter –> SUPPORT PACKAGES & PATCHES –> Search for: “hana optim”

Unlike HWCCT, which is ready to use just by extracting SAR file. Here, with HCMT we need to install the tool on the server.

It will have setup folder, navigate into the folder and install the tool using hcmtsetup command

After setup, the following folder structure is available:

The duration and repeat rate of the tests depends on the type of execution plan that you intend to run.

The following execution plans are available:

executionplan.json – Default execution plan that helps you to check if the KPIs for SAP HANA certification are met.

full_executionplan.json – Performs the same tests as the default execution plan, but has a higher test repeat rate and thus a longer test duration. This test is used for SAP HANA certification.

So for people who wants to validate HANA server before installing should use executionplan.json plan to test their HANA servers

NOTE: I have executed this tool for Scale-up System

NOTE: This tool will run for a while, so make sure you run this tool in one of your jump server. 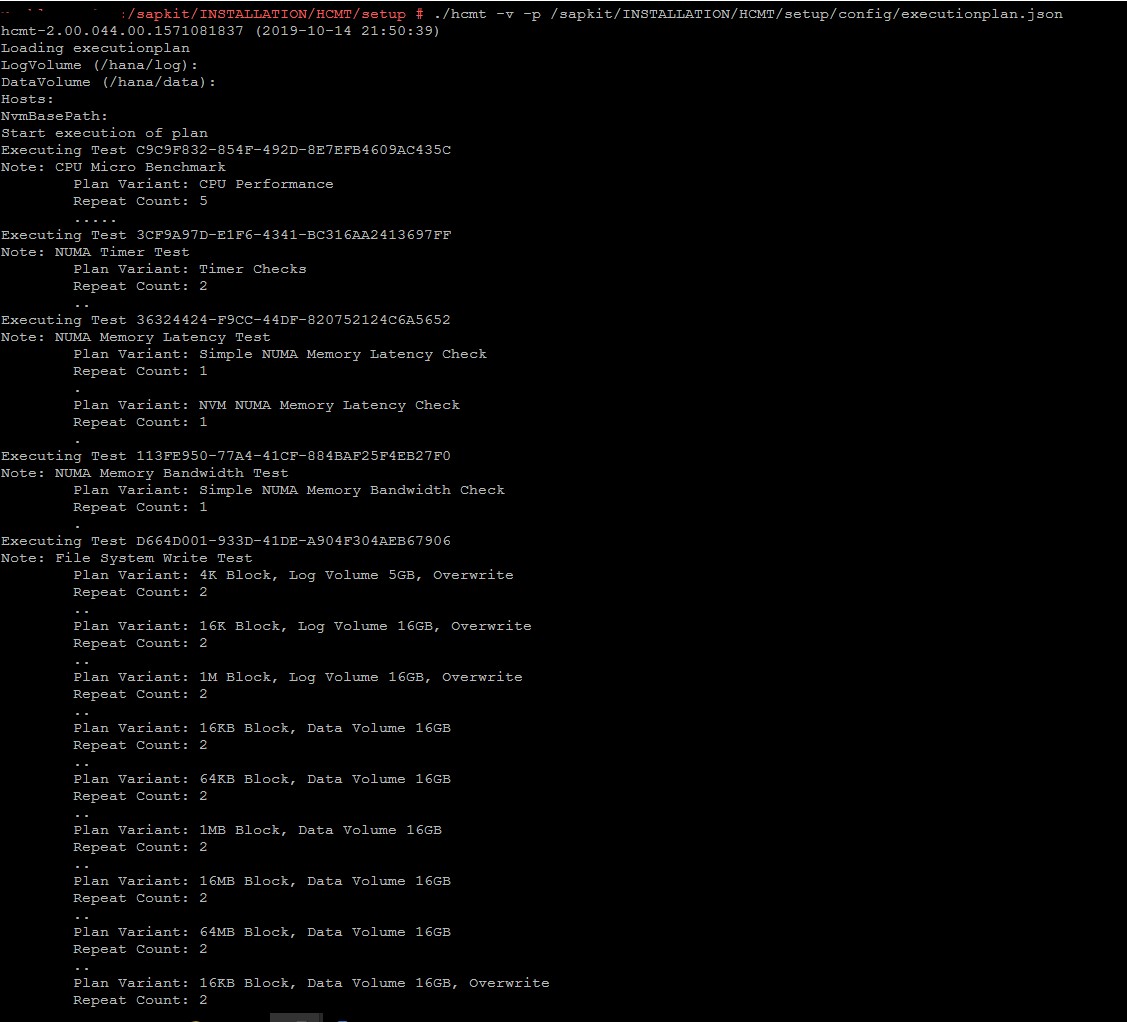 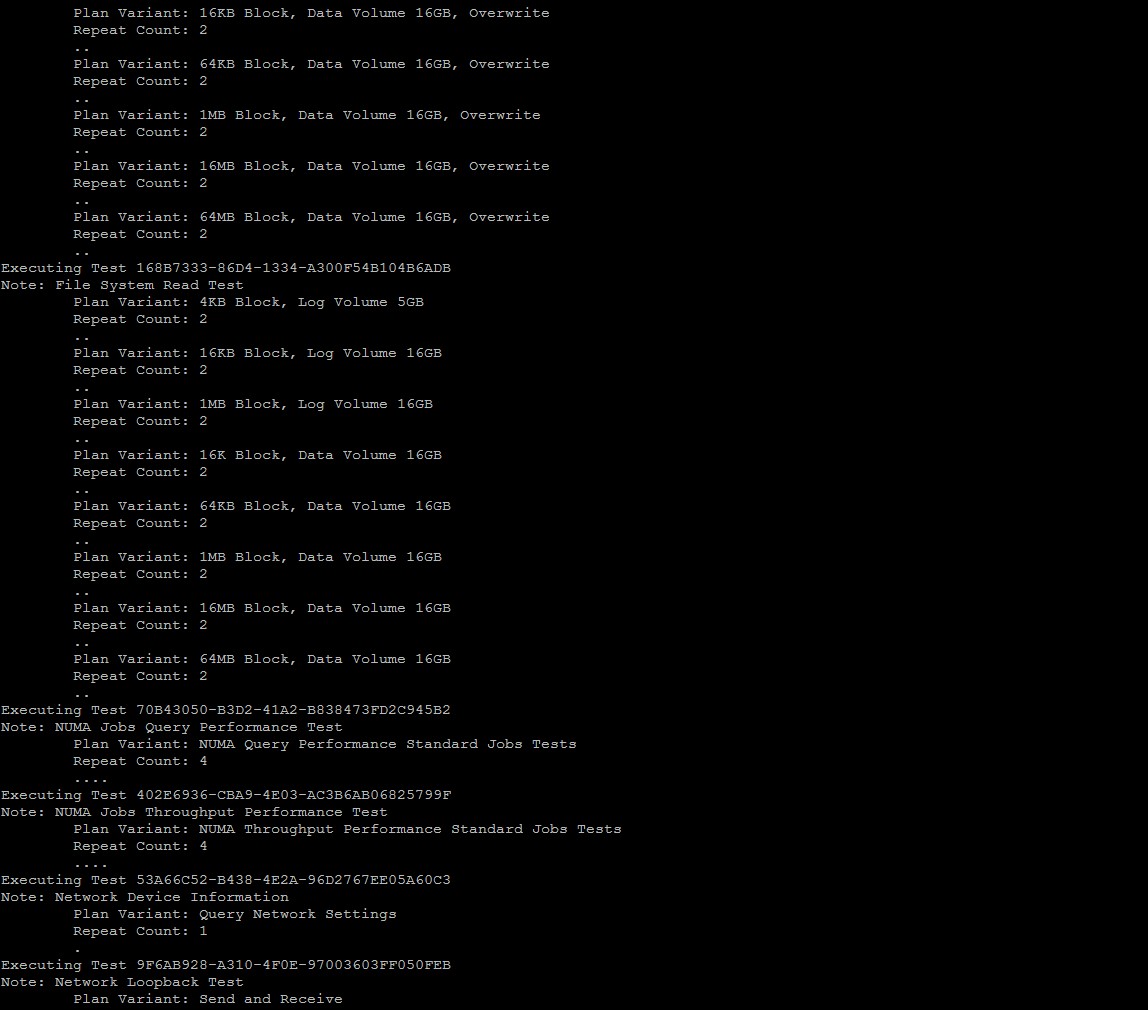 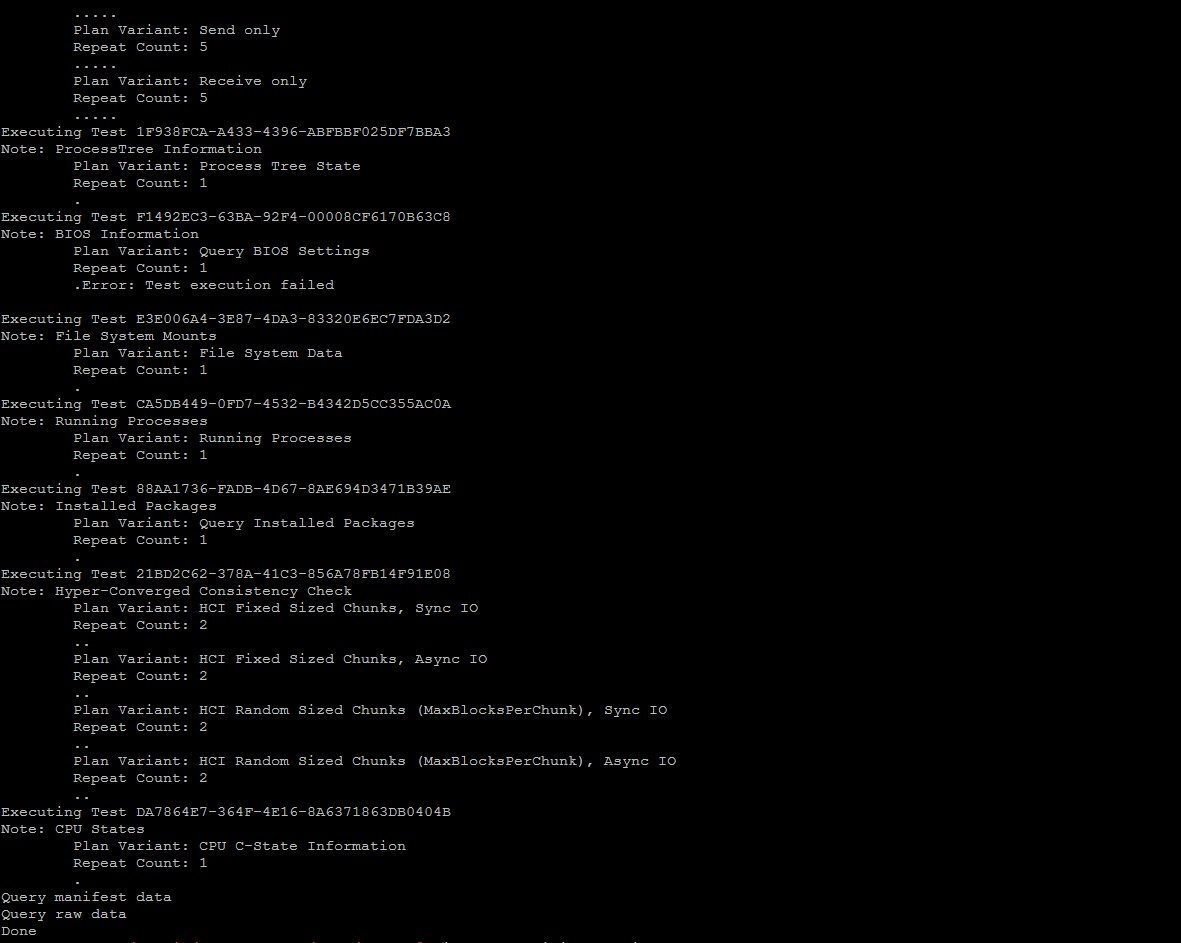 Once the execution is completed it will create a file named hcmtresult-<dateandtime>.zip inside the same folder. Transfer that zip file into you desktop

We need to upload the measurement results file and analyze the results to see whether the systems meet the configuration and performance requirements.

Provide details based on your usage and click Save

If you have multiple system configured, make sure you upload measurement result to appropriate system.

SAP HANA hardware and cloud measurement analysis provides a graphical and textual representation of your measurement results. It allows you to see which parts of your system are doing well and which parts may need some changes or improvements to achieve the required performance.

You can read the pdf attached to SAP Note 2493172 on how to analyze the result.. 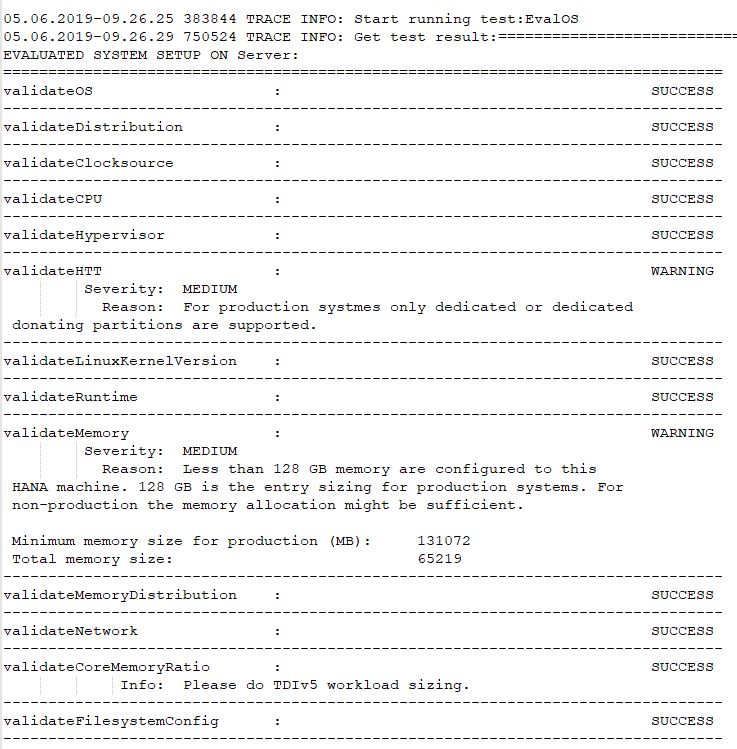 But as SAP suggested that this tool is still in development. So probably we can expect to get more holistic insight from this tool in future.

Thank you Dennis Padia for sharing

Hmm, I’ve just spent some time doing HWCCT for a load of HANA systems.  Looks like I need to do it all again.

Also, I see your Kernel passed.  I appear to have a string comparison issue:

Thanks Dennis for putting this together as concise info !

Thank you Vijay. Hope it can be useful to others.

Hello Dennis, thanks for this blog!

This is not clear for me:
full_executionplan.json – Performs the same tests as the default execution plan, but has a higher test repeat rate and thus a longer test duration. This test is used for SAP HANA certification.
So for people who wants to validate HANA server before installing should use executionplan.json plan to test their HANA servers

In order for any server to be certified for HANA by any vendors, they also need to run this HCMT tool.

For business or end user to validate server, they can run executionplan.json.

Very informative and detailed information. Thanks.

I'm running the executionplan.json but It has 15 hours running, is there a way to stop it? or should I wait?

Great Work.. Just my one Query . I have follow same step and its taking too much time. Its running from last 48 Hr. but still running. Might be will take another 24 Hr.

I have run this script executionplan.json

I have 512 GB RAM and 32 CPU server and 3.5 TB Storage with different different partition.

Is it take generally much time ? or Something going wrong on my server.

Thanks for your sharing.  I’m running the executionplan.json and got this result:

what can be done about it?

HCMT or HWCCT perform high level checks against the predefined KPIs. The results help you to understand if the server is properly configured for HANA installation.

In your case, it seems you have already installed your database ( as it shows you have set the logmode 'overwrite'). If so, you must execute SQL: "HANA_IO_DiskDetails" from 1969700.

The result of the query will give you details on disks including queue length, latency, throughput and request rate.

Many thanks for your support.

I uninstalled my HANA DB, but still got the following result: 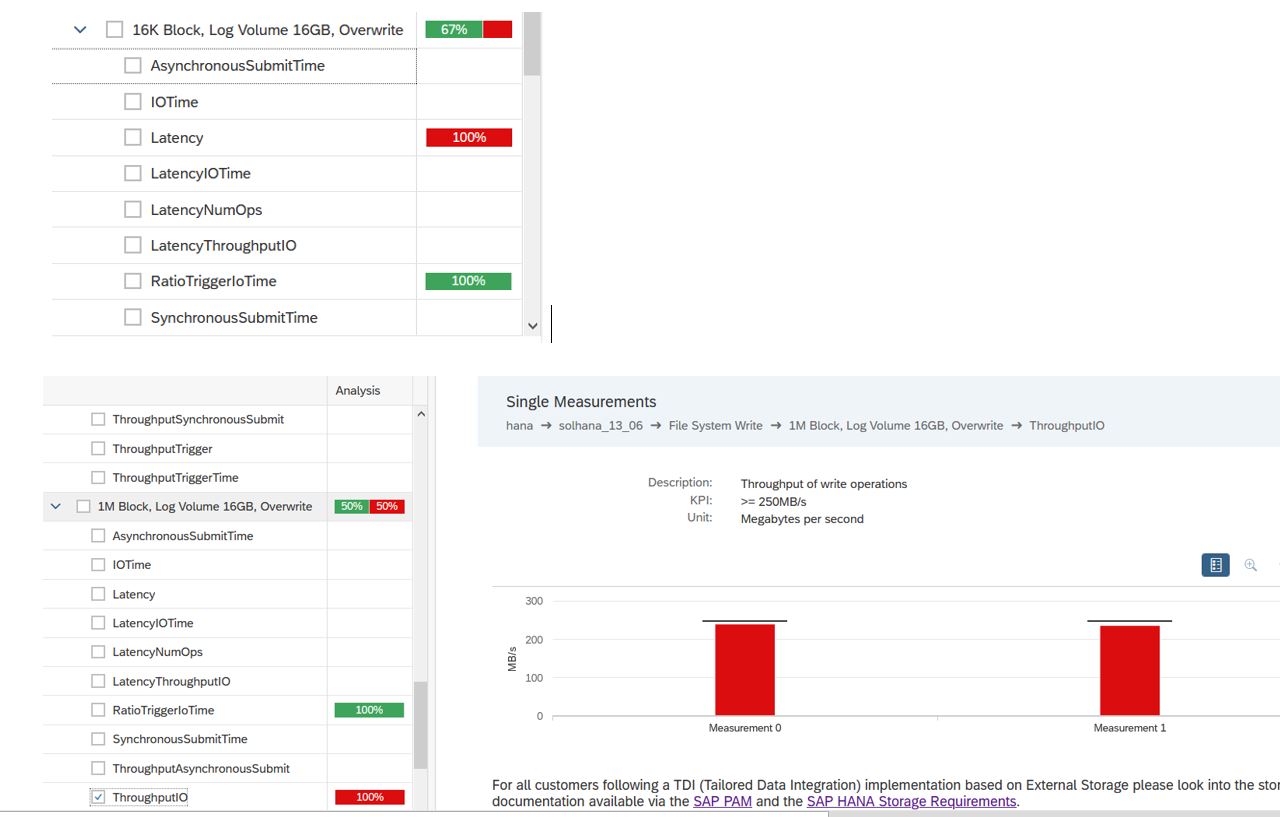 How can you improve that?

What could be the reason for this ?
Could I get performance problems if I install on this hardware?

I didn't mean you to uninstall the database, rather I suggested you to execute the SQL for a better understanding of the disks throughput and latency for the operational database :). However, it's ok if you did.

What could be the reason for this ?

Different kind of disks have their upper limitations in terms of IOPS and throughput (for the way they are build) to read and write the data within them. The disk allocated to your log volume falls a little short to the KPI that SAP has defined for smooth operations.

Could I get performance problems if I install on this hardware?

You haven't mentioned the hardware type. If it's intel's Westmere , even the worst value can be accepted.

For other hardware : The throughput of the volume is just a little short (~ 235-240 MBps) which is fine as long as you are not going to run the system for a productive environment. If a high load productive environment, the logs have to be written at faster pace into the disk and if this does not happen, the transactions go slow down for end users. if it's not a highly used production or is going to be a non production system, you should not worry much.

How can you improve that?

Many thanks for your response.
Our file systems look like this.

Can this be due to the settings that should be made after the OS installation after the note (after the note note 2684254 - SAP HANA DB: Recommended OS settings for SLES 15 / SLES for SAP Applications 15). Or is it really just the hardware.

Many thanks for your response.
The filesystems have different mount points.

Can this be due to the settings that should be made after the OS installation after the note (after the note note 2684254 - SAP HANA DB: Recommended OS settings for SLES 15 / SLES for SAP Applications 15).

Or is it really just the hardware ?

I see your log volume is on normal physical mount. You can consider my above suggestions based on your requirements and environment.

The suggestions in note 2684254 are related to OS and Linux kernels. The improper settings can impact memory ( e.g. OS doesn't allocate or release memory) or issues related to frequent disconnections and OS reboots because of old/incompatible linux kernel ( I actually have faced these issues).

However, they have nothing to do with throughput of a volume ( i.e. log volume in your case). This is more of the hardware thing.

is the tool able to tell me if my vendor applied the correct core-to-ram ratio or if the VMware settings for CPU are correct?

How may i check if all relevant checks are succeded and my system is certified or correctly setup?

Nice blog Dennis. Most of us don't read the complete instructions, as the default execution runs 5 times.

We can change that in the executionplan.json file from 5 to >or=1.

Very good blog.  I ran this on a 2566GB HANA DB using the executionplan.json.  After 9 hours it completed and returned a 14Kb zip file.  I uploaded that and after clicking submit, I get an error: Archive not valid: missing or inconsistent manifest.json.

I opened the zip on my desktop and don't see a manifest.json.  I only see the files shown in this screen shot.  It's possible my jump box session was timed out, but I noticed that the HCM tool does keep the RHEL console screen actifve with a cursor spinning. 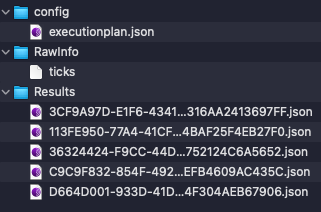 Is there any way to check for the multiple volumes at the same time.

like for example, I have two data volumes & two log volumes. How can we check for those at the same time.

Also if IO throughput failed for read/write, from where we need to check for recommendations. Can anyone please help on this?

i am facing typical scenario where i am not getting bar at all in the Analysis.

Is this something wrong ? i am looking for BAr analysis which clearly indiactes where i can focus and correct.