As we got many excellent questions for the free openSAP course: Virtualize and Automate Your SAP Testing Using Int4 IFTT  we thought it would be good to post them here in a form of a Frequently Asked Questions (FAQ) in a blog format so it’s easier to read all of them at once. 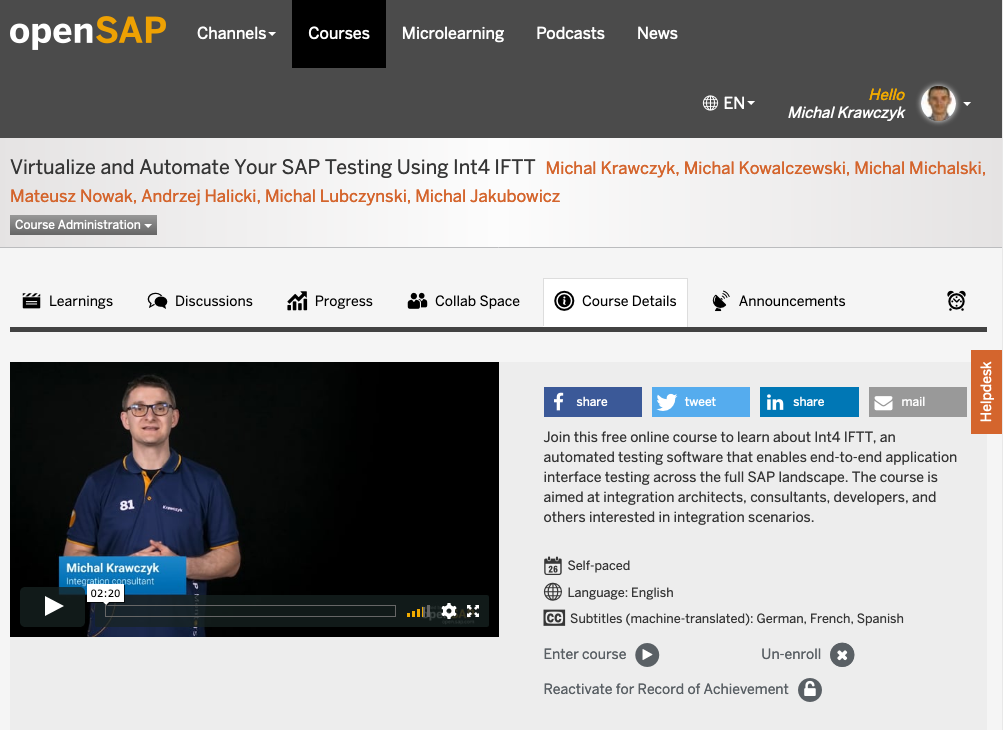 1. What are the advantages of Int4 IFTT over SAP Solution Manager Test Suite?

Int4 IFTT is a tool which was designed to be used to test SAP middleware (SAP PO, SAP CPI, SAP AIF, IDOC, proxies, also for S/4HANA conversions etc.) where it can be fully scriptless (no need to create any test data as we use existing messages or backend documents posted on the SAP backend systems) so it be be used in all sort of migrations/patching/service pack upgrades/rollouts where it’s not possible to create test cases manually as with other testing software.

On the other hand Int4 IFTT can be called via API from any Test tool like HP/Microfocus ALM, Test Suite, etc. for test result analytics and this kind of integration we do in all of our projects as integration testing is a good way to start the testing journey (due to scripless nature) but the journey needs to be continued with other types of testing too.

With Int4 IFTT we also test different phases of the projects (more the Unit Testing and Integration Testing and less for UAT).From the functional perspective Int4 IFTT is can also virtualize external systems (legacy, B2B).

So to conclude Int4 IFTT is a more detailed engine for running the Test Suite if your company heavily relies on integration with other systems.

2. Does Int4 IFTT have any API (so other tools can call it)?

a) the API for Int4 IFTT when you want to initiate Int4 IFTT runs/executions from other tools like Microfocus ALM https://www.int4.com/int4-iftt-integration-with-alm/

3. How does Int4 IFTT support DevOps ?

Seeing that in DevOps a small team is recommended for efficiency we’ve designed Int4 IFTT in a way it’s easy to be used by 3 types of people:

4. Can Int4 IFTT integration with SOLMAN Focused Build (CBTA) to be used together ?

However – in case Int4 IFTT needs to simulate a complete SAP End to End process for integration flow where a certain activity needs to be done manually in SAP like:

Int4 IFTT can use (as one of the steps) ecatt or any other screen recorder (CBTA) and the same applies – any test in ecatt/CBTA can call Int4 IFTT to do a integration scenario test (via Int4 IFTT API).

5. Is testing without SAP PO/CPI possible with Int4 IFTT ?

Int4 IFTT can and is very often used without SAP PO/CPI as shown in the S/4HANA conversion and ABAP backend lessons as it has IDOC, Proxy, AIF adapters. So you don’t need any middleware but still can test all SAP integration scenarios based on IDOCs, Proxies and SAP AIF. This is also a standard way how we test S/4HANA conversions as the demo ssytem for conversion does not need to be connected to any middleware but still we may want to test some scenarios.

So the answer to your questions is – yes, we work like this quite often without SAP PO/CPI as Int4 IFTT is testing both parts of an interface middleware + backend implementation (they can be tested together or separately)

6. How do you handle different Business Systems (names) for ECC in DEV, QAS, PRD ?

The functionality which handles that in Int4 IFTT is called Landscape configuration where you configure all systems with their respective names (as in SLD) so the changes are happening on the fly during test case execution. It’s described in Lesson 1 of Week 3 in more details.

7. What are the deployment options ?

Int4 IFTT is a SAP certified ABAP addon so you can deploy it on any ABAP based system (like ECC,S/4HANA). We however recommend to deploy it on SAP Solution Manager as a central instance connected to all exiting systems.

Yes, there are alternatives to include UI testing in Int4 IFTT (as for this eCATT is used).
In week 3 of the openSAP course, you will see Int4 IFTT API that allows for calling test cases
from other testing tools like CBTA, Microfocus UFT, Tricentis Tosca. In such a case, the record & playback function will be delivered by them, and the application interface test cases will be executed and validated by Int4 IFTT. The difference is that test case orchestration will be maintained in the external software.

9. What are the benefit from Int4 IFTT to ECATT or CBTA ?

Int4 IFTT is used mainly for test automation of integration flow scenarios
(virtualization of sender systems like B2B, legacy, etc. and then comparing the final result – either message after mapping or the final business document
created in the backend system). At the same time Int4 IFTT supports ecatt for UI flows
(for example when you build a process like order to cash in Int4 IFTT – EDI order, EDI ASN, EDI invoice but one of the steps like ASN creation needs to be done manually and not with the interface, Int4 IFTT uses ecatt for doing that). Those kind of processes will be shown in Week 2 and Week 3 during lessons with ABAP backend support.

So to conclude Int4 IFTT is doing integration flow testing and not UI scripting (ecatt),
about cbta (we will probably add it’s utilization in Int4 IFTT) but due to the scriptless nature of Int4 IFTT (tests are created from real messages and don’t need to be done manually) it’s not the priority right now.

SAP E2E means we only test all SAP applications (SAP middleware – SAP PO, SAP CPI + SAP business systems, ABAP code, customizing, SAP AIF, business documents). So all non SAP systems are completely virtualized hance not required for the test. This basically means since SAP is in most cases the most “changed” system, we want to make sure we at least have it tested.
(so bank, EDI system, other legacy applications are not required to run the test at all – as those are virtualized by Int4 IFTT).

This kind of approach is very important for us as we want to enable earlier stages of testing.
Many companies don’t have any automated testing but they want to start with full E2E flows
which in most cases fails due to the complexity and maintanance later one. We believe it’s easier to start with testing just SAP system and only do something more once you have this mastered.

11. What are the differences between INT4 IFTT and SAP PIT ?

SAP PIT was designed for a single purpose only – to help developers do the SAP PO migration. Int4 IFTT, on the other hand, was designed to help to implement continuous testing across all SAP middleware technologies, so SAP PO migrations are just one of the many different use cases.

a) Int4 IFTT supports testing of the complete SAP integration (SAP middleware but including ABAP backend postings as mentioned in Units 2.4 and 3.5 of this course).

d) For the continuous testing Int4 IFTT was also designed to support daily runs and rollouts performed in SAP GUI by testing teams/functional teams (and not only by developers as with PIT where you need to use Netweaver Developer Studio to work with that).

e) Another main difference is out of the box support for external tools integration like (Microfocus ALM, SAP CHARM).

e) There are many other low-level differences even in Int4 IFTT even for SAP PO testing (like adapter module support – B2B, flat files compare, SAP PO multi mappings) and more of them are described here: https://www.int4.com/sap-test-tool-pit-sap-po-7-5-sp14/

As for the Solman version – Int4 IFTT can work with any available version of Solman.

12. Do you need master data for the testing scenarios ?

There are many use case scenarios supported by Int4 IFTT:

a) SAP middleware only – (SAP PO/SAP CPI, migrations.) where we only test messages (with routing, adapters, etc.) so in those cases masterdata is not required at all – so you can easily take the messages from production landscape and run those on any other landscape (dev, test, etc.)

b) ABAP backend, S/4HANA, SAP AIF, End to End scenarios – in those cases you need to have correct master data but in those cases we mostly create scripts for each landscape (and not run them across landscapes). Unless we do S/4HANA conversion then in most cases the sandbox where you test the conversion is a copy of the production system so you can use production master data to check if the S/4HANA conversion did not change anything in your integration scenarios.

Quite a common question 🙂 It’s the general recruitment rules at Int4… 🙂 However we make some exceptions for other amazing people who’s names don’t start with Michal + in this case not all Michal’s from our company had time to help with the recording as one other was busy with writing our latest SAP Press book (8th book from int4 about SAP).

14. How did you record this virtual whiteboard ?

All figures are drawn on the lightboard – so we’ve used a marker only. The technique is called a lightboard so there’s window in front of us on which we draw pictures, no software is needed for that.

In case you’d have any more questions – please do let me know.