This blog post is a step-by-step tutorial for implementing an ABAP program for language and sentimental tone detection. IBM Watson Tone Analyzer service is used to perform the sentiment analysis.

Though this tutorial focuses on sentiment analysis, other IBM Watson services can be utilized similarly. Thus, the description here can be used as a blueprint for integrating any IBM Watson service into an ABAP application.

The IBM Cloud is a Software-as-a-Service platform that offers over 190 services, including IBM Watson AI services. It is located at

If you do not yet have an IBM Cloud account, create one. A free account is enough to complete this tutorial.

The IBM Watson services offer multiple plans including a free plan that can be used for testing. Select the Lite plan here. You may also want to adjust the Service name. Afterwards click button Create.

The service is instantiated immediately.

To use the Tone Analyzer within an ABAP application, you must know the service credentials. They consist of an API Key and a URL and can be displayed on the Manage view.  You will need them later in your ABAP program to access the service instance. 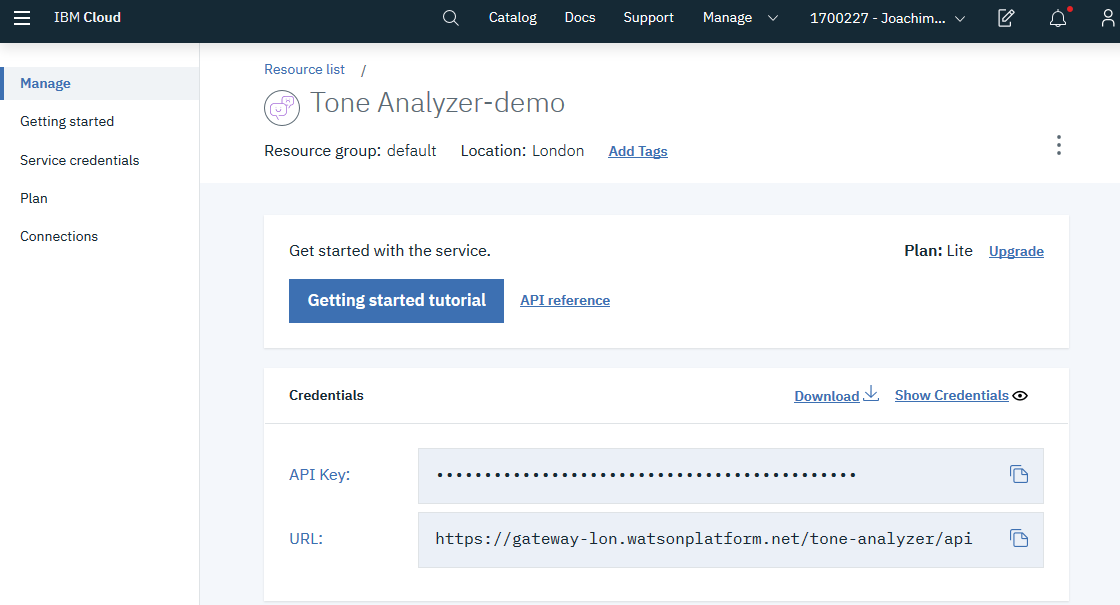 Therefore, abapGit must be installed on your system. Follow instructions on  https://docs.abapgit.org to do so. Do not forget to setup the abapGit Repo and to pull the latest abapGit code.

On the Git repository view click Pull and select a transport request to clone the ABAP sources to your system.

If you are experiencing an SSL issue, check that all profile parameters are set correctly and required SSL certificates are installed. See https://docs.abapgit.org/guide-ssl-setup.html and file README.md of the Git repository for more details.

After cloning, package ZIBMC contains all objects of the ABAP SDK for IBM Watson. 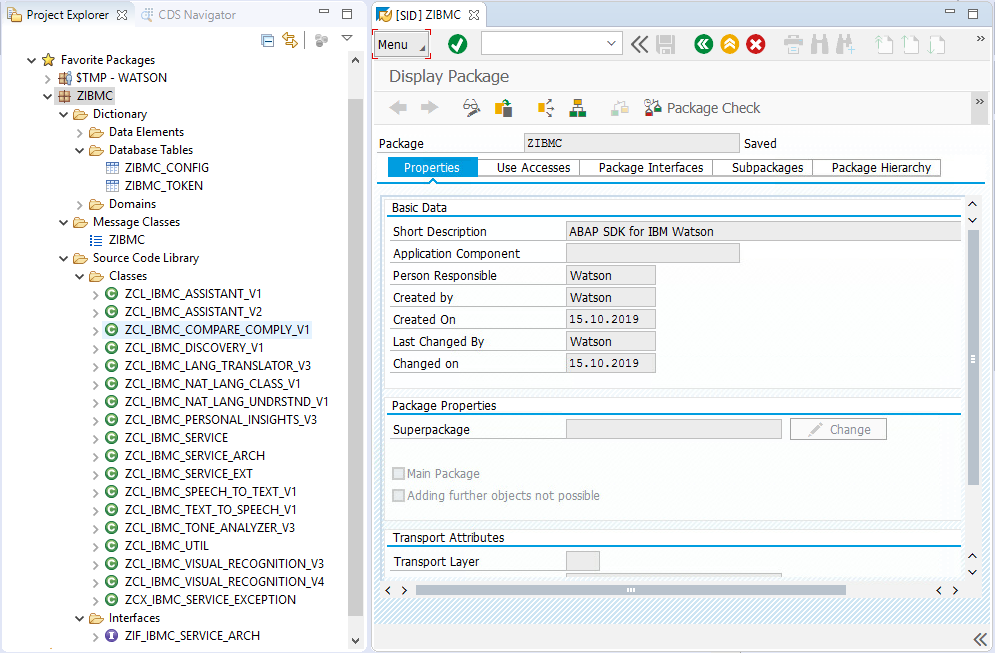 Now you are ready to exploit the ABAP SDK with your own ABAP programs.

Create new ABAP Program ZDEMO_TONE_ANALYZER. When completely implemented, this program reads plain text as input, analyzes the tone of the input text and prints the result.

First, add a line for input parameter i_text. This parameter will contain the text that is be analyzed for sentiments by your program.

You must instantiate an ABAP class that provides an interface to your individual IBM Watson service instance. Since you are using the Tone Analyzer service, the corresponding ABAP class is zcl_ibmc_tone_analyzer_v3. You find the ABAP class name for each IBM Watson service and detailed descriptions in the online reference at

Add an appropriate data declaration to your program.

The ABAP SDK for IBM Watson provides the ABAP class method tone that represents an ABAP interface to the IBM Watson service API endpoint and transparently converts JSON data to ABAP structures and vice versa. Suitable ABAP types for data exchange are provided as well. Here ABAP structure type zcl_ibmc_tone_analyzer_v3=>t_tone_input represents the data structure that is required by IBM Watson service API endpoint tone and is therefore the type of the input parameter of ABAP class method tone. Thus, declare a variable of that type and assign the input text to the corresponding ABAP structure component.

Now you are ready to perform IBM Watson tone analysis by invoking the corresponding ABAP method tone. You should implement a try-catch block to catch exception zcx_ibmc_service_exception in case of an error. This exception implements interface IF_T100_MESSAGE and can therefore be used with the MESSAGE command.

The response of IBM Watson service API endpoint tone in JSON format is hidden by the ABAP SDK for IBM Watson.

Assign the importing parameter to ABAP variable ls_tone_analysis using implicit data declaration as indicated in the ABAP code snippet above. The variable is used to access the response of the IBM Waston Tone Analyzer service by regular ABAP means.

For example, loop at internal table ls_tone_analysis-document_tone-tones to write all rated tones to a SAPGUI list. Since there is also a data type defined for the records of that internal table, direct access to the components of a record is supported. Subsequently assign each record to variable ls_tone using implicit data declaration.

You can now run your program. As an example, enter the following text for parameter i_text.

“Team, I know that times are tough! Product sales have been disappointing for the past three quarters. We have a competitive product, but we need to do a better job of selling it!”

Your program should return the result of the text analysis as score for various tones like shown on the screenshot below.

You must provide IBM Watson service credentials to ABAP method zcl_ibmc_service_ext=>get_instance in order to instantiate an ABAP class. By reason of better security and easier maintenance it is recommended to not hard code the credentials in your ABAP program. Instead, you can store the credentials in table ZIBMC_CONFIG.

Now you can provide service credentials to ABAP method zcl_ibmc_service_ext=>get_instance by specifying parameter i_instance_id. The parameter value is INSTANCE_UID as it appears in table ZIBMC_CONFIG.

Finally, here is the complete source code of your ABAP program.

In this blog post I have shown that you need just a few lines of code to add AI powered by IBM Watson to your ABAP application. Certainly, the techniques described here do not only apply to programs, but also to other ABAP objects, for example OData services that are bound to a Fiori application.

Explore the IBM Watson services at https://cloud.ibm.com/apidocs?category=ai and imaging how these services bring AI to your ABAP code. Have Fun!

Why storing credentials in DB table is better than hard-coding them?

SAP Already has a secure storage (SECSTORE), but sadly it's for SAP internal use only.

You definitely want to separate credential (customizing) data from program code. For example, you do not want to change your code if you have to apply another IBM service instance. Also, you may want to apply different IBM service instances for development and production, but you have the same (transported) code on both systems.

You are right, SECSTORE would be the natural location for these kind of credentials, but as you said, is limited to SAP internal programs.

If storing service credentials in a table does not fit to your security policy, you can implement custom token handling, see https://github.com/watson-developer-cloud/abap-sdk-nwas#iam-authentication.

For the matter of fact, I was referring only to security aspects.

You are right that it's better from maintenance point-of-view.