I had a privilege to attend SAP TechEd this year again. It was possible through SAP TechEd 2019 Tutorial Mission contest.

This year due to my workload within project work, I almost forgot about the contest and I finished it very late in August. I think it was even on very last day for the contest’s mission – a few hours before deadline. Then I forgot about it again. I thought that I was lucky enough on last year so there is no chance for me to make it happen this year too. Sometime in mid of September a tweets from people who succeeded with the contents started to pop up. I again assumed the TechEd would not be for me this year. How big my surprise was when an email from Developers@sap.com showed up in my mailbox. That was approximately 2 weeks before the event. Afterwards it went very quickly, booking flight ticket and hotel in Barcelona, building an agenda…

So I was there, attending the SAP TechEd again. I flown in a night before it started to be fresh for a conference. From last year, I knew what to pack to take with me. This time there was a nice present to all attendances – a reusable bottle for water. Which served very well, all participants helped conserve a water. Although I saw a one small drawback. The phone app needed separate registration to take a part in water refill program. I can understand that the registration thing hold some people back from participating. Perhaps it would be easier to make an authentication via some social network ID (twitter/facebook/google) or even via SAP ID…

The TechEd started with opening keynote on Tuesday morning. I think it is a kind of tradition to kick off such event with great visual presentation supported by music. It feels like one is on rock start concert and not on the conference. For TechEd veterans it is perhaps normal for me it is still amazing to experience it. I liked Juergen Mueller attitude shown during the key note. Bringing 17 years old programmer girl on a stage was great thing. The future of the world belongs to the youth of the world – also SAP gets that. At her age, I was trying to program some very basic graphic things in Pascal language on 286 type of computer at high school. She did her programming for her school assignment in cloud environment – very different times.

What was announced during the key note? I just focus on things that were related to topics I followed – data warehousing/analytics, integration and ABAP.

At first, an Intelligent Enterprise (IE) was discussed focusing on four examples of End-to-End processes (like Design to Operate, Total Workforce Management, Source to Pay and Lead to Cash). All this was described while emphasize an X data that is flowing around Experience part of the IE and O data flowing around Operation part of the EI whereas Intelligence is central part of the IE. 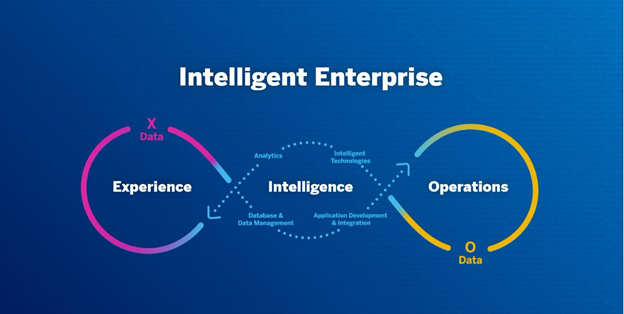 Next announcement was about SAP HANA Cloud. Which cloud solution based on HANA platform that address storage (multi-level data tiering), performance scaling, processing, quality, and consumption of data. It comes with services like Data Warehouse Cloud (see below) and SAP Analytics Cloud (SAC). Will be available before Christmas 2019. What I got from its presentation is that it is HANA based SaaS offering.

Now into more details of four pillars of the BTP. Within first pillar – DB & Data Management it was nice to see that SAP BW/4HANA has still a prominent spot within SAP business architecture in a category of on-premise apps. In cloud category there is a brand new solution called SAP Data Warehouse Cloud. I do not know how to call it better I tend to refer it as “DWaaS”. This abbreviation can be seen in URLs pointing to UI of this solution e.g. https://*.hanacloudservices.cloud.sap/dwaas-ui/ so I guess I am not that far from naming it correctly. The DWaaS aims to be logical DW solution for dynamically changing landscapes. It can consume data coming from SAP BW, BW4, SAP SQL DW, SAP HANA etc. It is SAP’s response to new DWH requirements in cloud world. It is not a product coming out from project blueberry that I heard about on TechEd 2018. However, from what I understand it leverages part of functions that were developed during the blueberry project. More than 2k customers registered for DWaaS already at the time of the key note. Needless to say the DWaaS is in GA as of Q4 this year and DWaaS is one of services of the SAP HANA Cloud.

Concerning second pillar – Analytics. SAP Analytics Could (SAC) will be as of Q4 this year embedded into SuccessFactors. This follows announcement from Las Vegas TechEd where same thing was announced just in case of S4/HANA. The SAC is now primary analytics tools across SAP product portfolio. One more announcement with regards SAP’s BusinessObjects portfolio. Beta version 4.3 of SAP BusinessObjects BI platform will be available in December this year.

Next, the third pillar App Development & Integration. I liked how CPI – Cloud Platform Integration is developing. Especially within integration of SAP solutions and 3rd-party apps via SAP Cloud Platform Open Connectors. Integration flows and data mapping are available on API Business Hub (api.sap.com) now. This is similar to what other integration (IaaS) companies are doing like mulesoft with their templates or built.io (now part of software ag) with flows. ML is used here to suggest best mapping fields by ML based content advisor. There is currently Open Connectors available to provide integration with 160+ systems.

The fourth pillar intelligent technologies. These comprises of Conversational AI, Intelligent RPA, IoT Cloud, IoT Edge. It was announced that will be 200 ML cases live by end of 2019. There was an interested demo show cased for automated user behavior mining. It started by identifying processes that can be automated. There is a tool called “spotlight by SAP” that provides overview of process (e.g. transactions in SAP ERP) that require a lot of manual effort. KPIs like total time spend in UI can be analyzed. Once the process candidate for automation is identified via Intelligent RPA tool, a bot can be created based on data from the user behavior mining. These solutions are coming from SAP spotlight. That is internal SAP startup focused on tools for process transparency and data-driven actions that developed the Spotlight by SAP tool.

Now to the TechEd’s sessions. Unlikely to my first year at the TechEd I was this time more picky while building my agenda. As rule of thumb, I always had a backup session scheduled in case some session would not be interesting enough for me. Anyhow, I attended approximately 20+ sessions, again related to topics I followed – data warehousing/analytics, App development / ABAP. Below I mention few of them.

I enjoyed session about “SAP Analytics Cloud, Analytics Designer: Road Map (AIN828)” by David Stocker. I appreciate David’s sense of humor for example while mentioning that lady sitting close to him in the plane on the way to TechEd that had whole P/L printed with her and studying it whole trip 🙂 yeah who on the earth would print the P/L 🙂

“Integrating SAP Analytics Cloud in SAP Applications (AIN103)” I learned that SAC is now strategic analytics platform for all core SAP business applications. Interesting demos were presented related to Digital Boardroom. Although it is separated product but it is based on different content in the SAC. Normally there are two flavors of the SAC implementation. One is embedded – means it sits on the same system just different tenant is provisioned to customer. Other one is cross app where data is coming from multiple apps to the SAC.

“One Data Management Strategy with SAP DW Cloud and BW/4HANA (AIN207)” – presentation on how DWaaS fits into business and IT user’s needs.

“Intelligent Planning with SAP Analytics Cloud (AIN105)” – session so called SAC for planning. It was nice to see all what the SAC is capable of in terms of planning. We will see how all this will cope with current SAP portfolios of planning solutions like BPC (standard/embedded/optimized/simplified, …)

“SAC, BW/4HANA, and SAP Data Warehouse Cloud (AIN376)” – hands-on session. I tried examples on how to consume BW/4 query in SAC. This seems to be important feature as BW queries (former BEx queries) will be only objects that the SAC can consume out of the BW/4.

“Overview of SAP BW/4HANA 2.0 (AIN208)” and    “SAP BW/4HANA: Road Map (AIN832)” – BW/4 is around for some time its 2nd version was introduced earlier this year. My only regret is to see that BW/4 simplifications (see BW4SL SAP Notes) are fixed and there are no plans to bring more functionalities of classic BW (like Analysis Process Designer) to BW/4.

Session “Unboxing SAP Cloud Platform (CAA115)”, I learned here that SAP Business Application Studio will replaced Web IDE going forward. How subaccount can be created for one account on SCP. In addition, there were interesting information about Neo part of the SCP although it is still supported but as SAP wants to give its customer option to go to any of hyperscalers so focus will be on CloudFoundry part of the SCP.

“Optimize Your Custom ABAP Code for SAP HANA (CAA104)” – For me a many new ABAP concepts were presented like: host expressions (here ABAP can derive correct type of variables from context), CTE – Common Table Expression (temporary results sets in SQL queries that can be accessed in other SQL statements), ABAP SQL Windowing (dividing data sets into subsets), hierarchies within CDS views, new built-in ABAP types, and so on.

More on steampuk. At last year’s TechEd there was RAP (RESTful ABAP Programming) model introduced. That was with so-called unmanaged scenario where programmer need to code all (e.g. CRUD) operations. Now there is managed scenario where some of functionality like Insert/Update/Delete is delivered out of the box. This certainly speeds up developing of Fiori apps. ABAP is still evolving but now with strategy = “cloud first but not cloud only”.

I spent some time at show flor too. SAP was running many interested things there. Few of them to mention: “unconference” meetups, community lounge, developer garage, community talks / community theater, app space where attendees had a chance to work on SAP tutorials, open source bar where few OSS projects that SAP contributes to were presented, learning zone, SAP runs SAP and others. SAP and especially people from SAP Developer and Community Relations team did pretty good job in here.

Funny thing happened on Tuesday night. I was so focused and in rush to complete tutorials in app space that I did not notice that people are leaving for the day. Security people had to kick me off from there 🙂

In closing, I want to say that it was great experience to be at the TechEd this year again. I met some people I know from different SAP gatherings (like Inside Tracks and/or Code Jam) there at the TechEd too. Not mentioning meeting strangers over morning coffee or during a lunch. Simply the TechEd is the place where community comes together. So thank you SAP community for having me.

PS: One more thing I want to mention waste management at the TechEd facility. I was very surprised to see that there were no dedicated bins for recyclables (paper, glass, metals, plastics). All the waste produced by conference attendees was just thrown into one type of bin for common trash. I do not think they separate and recycle it later. If the facility operator does not care about it – SAP should. Even it would mean to pick different operator/location IMHO.