Each chapter in the book starts with a quote (or two) and for the chapter about the SAP HANA developer persona, we quote a Dutch scientist and a Franciscan friar.

In reality, programming languages are how programmers express and communicate ideas—and the audience for those ideas is other programmers, not computers.

You can read the whole (short) speech here (Let me introduce myself. I’m a nerd, a geek)

The popularity of the Python programming language has reached an all time high. According to the PYPL PopularitY of Programming Language Index, Python is firmly on the number one position (also on IEEE Spectrum). On the more established TIOBI index, Python is still number three behind C and and Java but is expected to reach the number one position in the next couple of years.

Of course, its recent popularity is all due to the usage of Python in data science projects and machine learning with NumPy, SciPy, PyTorch, Theano, Keras, PyBrain, PANDAS, and even Google’s TensorFlow. But Pyhon has been around for some time. Did you know, for example, that the first implementation of the Google search engine was also written in Python?

According to van Rossum himself, he wrote Python in December 1989 because he ‘was looking for a “hobby” programming project that would keep me occupied during the week around Christmas‘.

For his personal home page with more stories and advice how to correctly pronounce his name, see

Or watch van Rossum tell the Story of Python (thanks to Oracle Developer).

You can learn Python for free at

The name of the programming language was inspired by the Monty Python Flying Circus BBC television show from the early 70s.

For our younger readers, here is the famous parrot sketch. Should British humour not be your cup of tea, for a bit of song and dance, the Lumberjack song starts at 3:50. Apart from Python, the Flying Circus also inspired Brexit.

Simpler solutions are more likely to be correct than complex ones.

Occam’s (Ockham) razor, paraphrased in different ways, also known as the lex parsimoniae or law of briefness | economy: Numquam ponenda est pluralitas sine necessitate. For the quote and the sources, see Wikiquote and for the full story the episode from In Our Time, BBC Radio 4 Podcast.

There are variations on the theme. Albert Einstein is often quoted with “Everything should be made as simple as possible, but not simpler.” (although the source is dubious, according to the Quote Investigator). Related also is the KISS design principle noted by the US Navy (see Wikipedia).

If you don’t care much for philosophy, here are handling and shaving tips for Occam’s Razor (full playlist).

The best minds of my generation are thinking about how to make people click ads.

Included in the original manuscript but not included in the book for lack of space a third quote for the development chapter from a Bloomberg Businessweek interview with Jeff Hammerbacher, This Tech Bubble Is Different by Ashlee Vance (14 April 2011). In the interview Hammerbacher is described as a 23-year old math genius one year out of Harvard who started in 2006 as one of Facebook’s first 100 employees.

The poets among us will know that Hammerbacher paraphrases Allen Ginsberg HOWL, I saw the best minds of my generation destroyed by madness. You can hear Ginsberg recite HOWL on YouTube or watch the movie.

In the original manuscript, a long list of references to other material was included, which for space constraints and other reasons did not made it to the final book.

The development topic for SAP HANA is HUGE! In fact, there are so many guides that the documentation set includes a map and guide, just to help you get started. Of course, there is a bit of overlap as there are separate guides for native development with SAP HANA XS classic model and with XS Advanced model, which for those less familiar, may sound a lot alike but just like Java and JavaScript, the only thing they have in common are the function (enabling native development) and the name (eXtended Application Services, or XS in short) for the rest they are actually quit distinct.

The guides are categorized by task, by scenario, by environment; there is a lot to learn here. 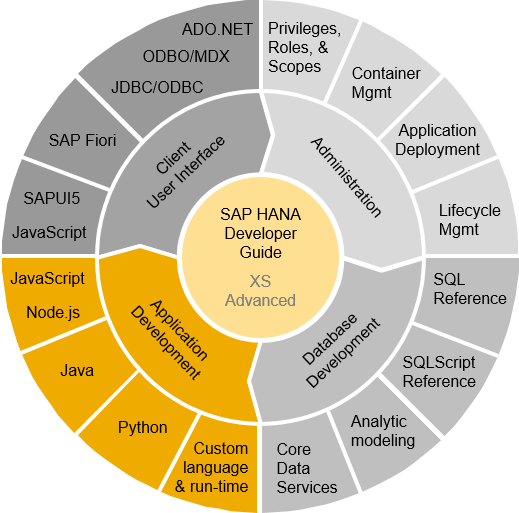 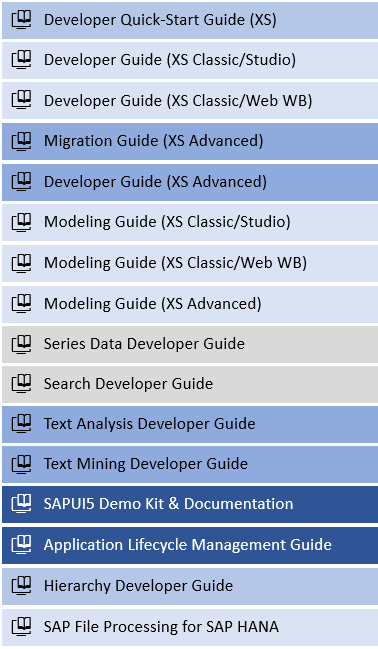 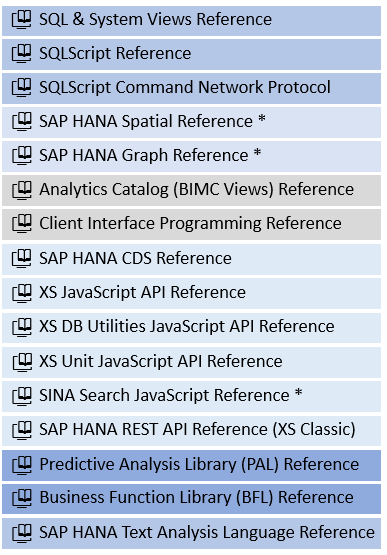 Apart from the documentation, there is also a lot of information freely available on the development center. Here (developer.sap.com), we find the hands-on tutorial that you can use to familiarise yourself with the different development topics. 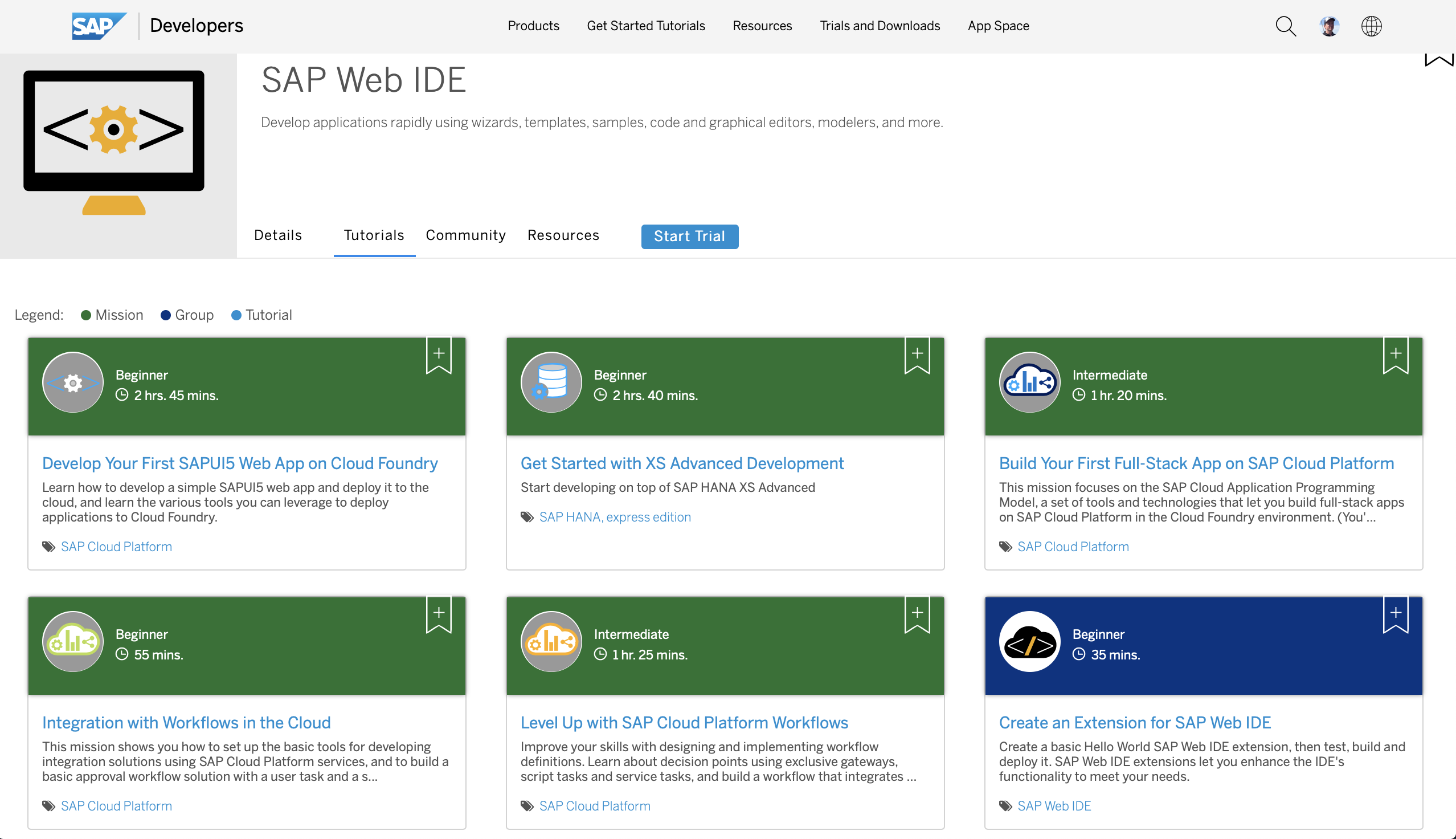 We mentioned the FAQ knowledge base articles of SAP Support in the previous blog about SAP HANA Administration. However, this treasure trove is not only for operations but certainly just a relevant for development topics. For example, see notes:

On the topic of performance, there is also a dedicated guide (listed under Performance, not under Development of the SAP HANA documentation set).

SAP Training offers a 3-day course about SQL and SQLScript, updated for each SPS release. In this training you will learn about basis concepts, SQL logic containers, declarative and imperative logic, working with hierarchies, troubleshooting and best practices, and much more:

There is also a 3-day course about ABAP programming for HANA. In this training you will learn about taking ABAP to HANA, database independent code-to-data and HANA specific code-to-data, consuming ABAP objects in HANA, and more:

These are just two of the many courses available. For the complete developer learning journey, see

To avoid any “we recommend ourselves” marketing, other relevant SAP Press titles have not been included in the book. Otherwise, on the topic of development, we would certainly have mentioned and recommended:

So much information! Where to get started? For a concise, yet comprehensive overview, check out SAP HANA, An Introduction. In about 60 pages, we cover all there is to know about SAP HANA development to get a good overview. It will also help you prepare to make the move from SAP HANA 1.0 to SAP HANA 2.0.

You will learn about