Running ABAP in Eclipse from a USB stick powered by SapMachine

There are several reasons why one would like to run the ABAP Development Tools (aka ABAP in Eclipse) from a USB stick or have a self-contained installation in one separate folder on your laptop.

One problem that occurs very often is that IT departments have installed a 32bit Java Runtime which is not supported by Eclipse. The latest release of Eclipse requires a 64-bit JVM, and does not support a 32-bit JVM as described here Eclipse/Installation.

I have added a screen shot of such an error message at the end of this blog but did not want to use this as the first picture of my blog.

With SapMachine there is now a SAP supported version of OpenJDK available for SAP customers and partners who wish to use OpenJDK to run their applications such as ABAP in Eclipse.

In order to run ABAP in Eclipse you don’t need a complete JDK. The much smaller JRE 11 from SapMachine is sufficient which can be downloaded from GitHub.

Caution: Please note that SapMachine is not yet supported on the latest Mac OS Catalina.

As already mentioned this setup can also be used to install eclipse as a self-contained setup in a separate folder on your laptop rather than using a USB stick.

I am administrator and I want to build distributable packages

How do I check the version of my Java Runtime?

You can check the version of the Java Runtime by running the command java -version. In case you only have a 32bit version installed you will see something like the following (that means you don’t see any hint that it is a 64bit version).

If we do this on our USB stick in subdirectory “jre\bin” we will see that it is a 64bit version. 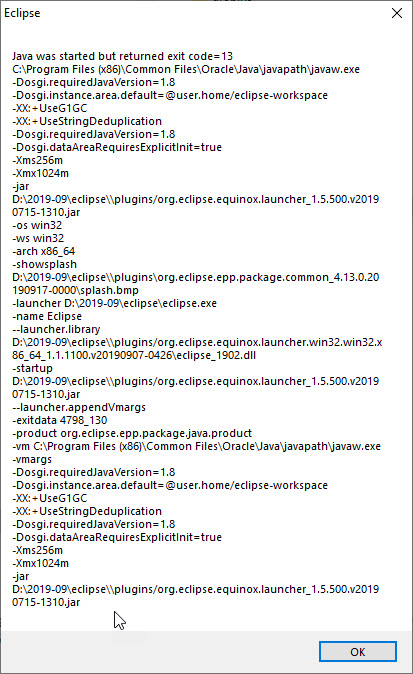 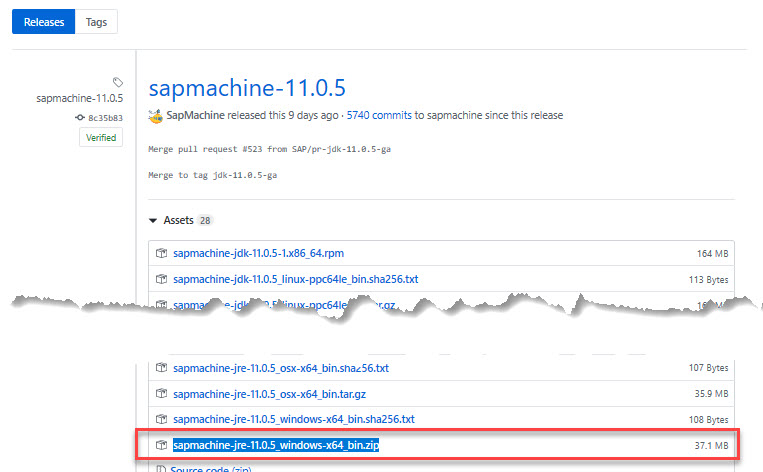 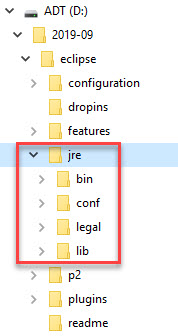 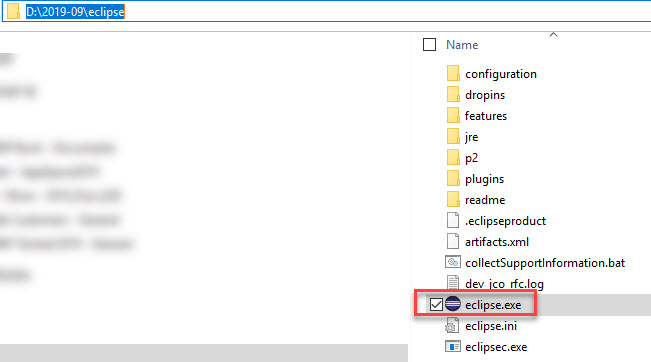 Now, why couldn't you have published this two weeks ago when I received my new work laptop...? 🙂

Sorry about not having been faster with posting this, especially for you getting now Java development requests. ?

two weeks ago when I received my new work laptop

Though ADT page and Eclipse page were blocked for security reasons, the workaround was to use an open network, update the USB there and get back to work in the other nw

Thanks Andre for posting such a detailed blog and providing the solution for developer like us who don't have admin rights on their machines. Now we can play with ABAP in Cloud even on machine where admin rights are prohibited 🙂

Sounds very cool, thanks a lot!

Thanks a lot for sharing it.

Do you have a trick also for the SNC_LIB_64 variable and single sign on?

Currently I have a bat file looks like this, but wonder if there is a better way to set this variable without having admin rights:

I am not aware of a better solution.

Thanks for the write-up which I'm currently trying to follow. Everything worked as it should (if a bit slow) up to step 8. When I tried to follow the steps outlined here, I (not completely unexpectedly as it happened before for other Eclipse installations) hit the snag of "HTTP proxy authentification required": 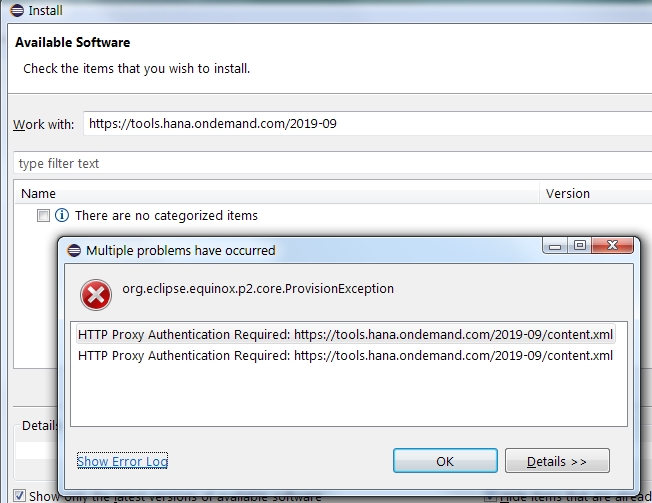 Is there any way around this as it's rather unlikely that we'll be able to provide this authentication via our company laptops? As far as I can tell, getting the "Eclipse framework" up and running via the zip-files doesn't completely get around the problems of how the ADT can be easily put onto a company computer.

Thanks much and cheers

Thanks for responding, Andre. I however don't think that this is something I should/could do on my office laptop. What is described in the stackoverflow discussion sounds to me like a hack to circumvent some security-related settings. In addition, I don't have a clue about the proxyname,  username and password expected for it (which I somehow doubt would be my usual credentials I use to access my laptop?). Oh, and we cannot do much in the system setting on our laptops anyway without admin access.

since in this case the settings are read from your OS.

No normal user is entering username and password for a proxy and so it should not be necessary for Eclipse users to do that. 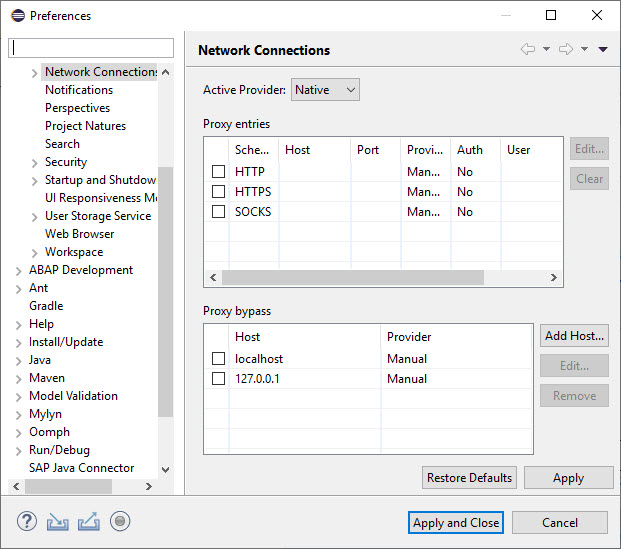 Thanks for digging into this, Andre!

Unfortunately, I have one more entry in the network settings which I apparently cannot change as the relevant buttons are greyed out. It’s already set to “Native” but there’s an additional entry in the table which I cannot get rid of or update: 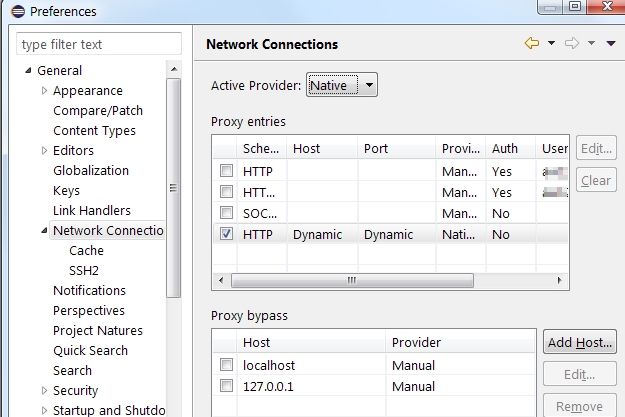 I tried updating the other three entries to Auth “no” but that didn’t change the error message I got when I tried to get the ADTs (not too surprisingly as the entries are not checked). 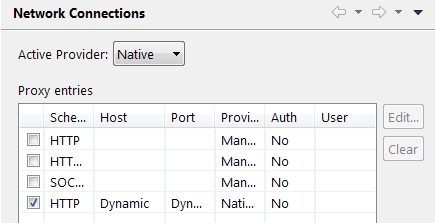 I had exactly the same issue at a customer. The problem is not with Eclipse but with something blocked by the corporate firewall. The "http/dynamic ..." entry has to do with your local computer's proxy settings. If you open Internet explorer and go to Internet options > Connections > LAN Settings you will probably see an autmatic configuration script.

Unfortunately we didn't find the cause when I had this issue - we spoke to a local network chap that could point us to a different corporate proxy server that worked, so we never bothered with opening a ticket with the networks team and all the procedures that would have involved.

So the gist of it is to contact your networks people, that's where something is being blocked.

Thanks for your comment, Mike! Not sure if we'll ever manage to get rid of this kind of blocking on the network side of things and what that restriction then in turn means for really utilising Eclipse ?. If it's not easy to set up for people on "their" machines, uptake of Eclipse/ADT will be fraught with frustrations and subsequent clinging to SAP GUI.

I don’t really see this as an obstacle. It’s a proxy configuration or firewall issue, raise a ticket and get your network guys to fix it. This is SAP-mandated software, there are more and more things you can only do with Eclipse so this will become necessary at some point.

As I said when I encountered it the company had an alternate proxy server and since it worked on that one we never bothered following up the solution. But it’s definitely something with your corporate proxy/firewall that should be sorted out. Once it’s fixed it will work for everyone.

It’s also a bit difficult for us to help as this is really something specific to your company’s internet access setup. But if you do get it sorted it would be helpful to let us know what the issue was.

PS, and it’s also possible to package Eclipse as a standard corporate software installation, I’ve encounter it in several organizations’ software shop / software manager or whatever you call it. It’s always been just the standard installation, but adding ADT is not a big deal.