A while ago I ran into an issue trying to update my ABAP Development Tools when working with SAP Cloud Platform ABAP Environment. Since it took me a while to figure out what the root cause was I thought that this deserves to be mentioned in a blog, just in case you encounter the same issue.

The error message I got was the following:

This message popped up when I tried to edit a Service Consumption Model in a 1908 ABAP trial system.

So far this message was not unusual and I clicked on the button “Update now” and ABAP in Eclipse began to contact the software sites configured in my Eclipse.

The problem now was that I received the information “No updates found”.

Now I was stuck … at least I thought so

The root cause of the problem was that I had used a 2018-12 Eclipse installation for which no up-to-date ADT plug in was available.

if you don’t want to run into any problems you should change the update sites for both Eclipse and ADT such that both always point to the latest version.

If these settings are active you will be notified to update your Eclipse as well as the ADT versions as soon as any update is available.

As described in the following blog

the release cycles of the ABAP Development Tools client and the underlying Eclipse have changed.

For both there is a new version available every 3 months. And SAP only supports the last two Eclipse Releases.

That means, that ADT plug-ins cannot be installed on an Eclipse platform which is older than 6 months.

The problem with my outdated 2018-12 installation was thus that no ADT client update was available that was able to handle the Service Consumption Model object since this dialogue had been changed.

Since in the ABAP trial version we will see new supported objects on a regular basis I expect such deadlocks to occur more often because new objects or new functionalities require an update of the ADT client.

But as I wrote there is a solution to avoid such deadlock situations if you go always for the “latest” version.

Thanks for the heads up, I think I’ve run into this before. The error is a bit misleading, especially with corporate installations that tend to lag behind a bit.

I face the same problem.

However, even after changing both Eclipse and ADT update sites to point to latest versions, the problem still exists. 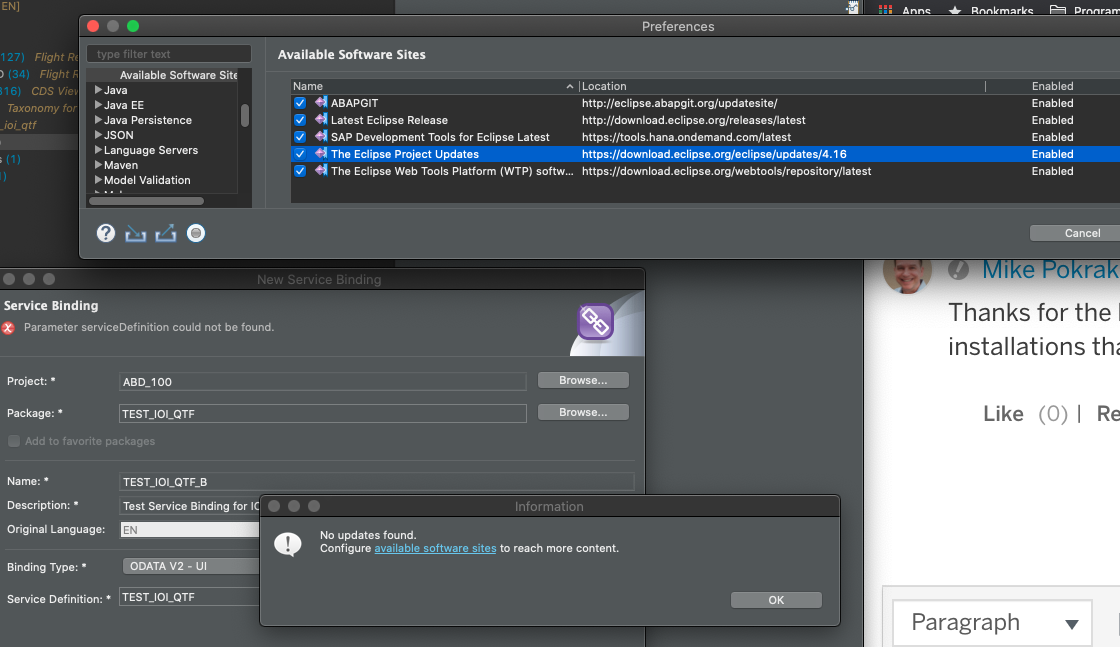 Do you know any other workaround?

what version of ADT Tools are installed in your Eclipse?

That no update could be found is not an error as such. It could be that you just have installed the latest tools and you are good to go.

The error that I described was that I used an outdated Eclipse and was forced to use an updated version of ADT.

But this update could not be found since the latest ADT Tools were not released for my outdated Eclipse.

There you will find information such as

In a conversation, Andre mentioned that because I am using an Internal SAP System, I should download ADT from an internal system.

There is monthly, weekly and daily ADT releases.

With internal SAP systems, new ADT versions are required that are not publicly released yet.

I tried it out and works for me.

Thanks for the helpful information Andre.

Your post included an internal-only link that most members can't access, so I edited to remove. If our colleagues would like to learn the link, they can reach out to us directly.