I’m inaugurating a blog series on tips and tricks in Analytics designer. Mostly, it is small things that application designers might find useful and helpful. As our first instalment, I show something that I’ve shown off in demos and in training material in the past, which has always gotten an enthusiastic response. You can use the R widget as a data science global script container.

When R was first included in SAP Analytics Cloud, it was intended to be a visualization tool; a way for end users to write their own charts. There is no built-in feedback mechanism for returning an R data frame to models or to other widgets.

SAP Analytics Cloud includes a part that runs in the user’s browser and a part that runs in the cloud. In the user’s browser, SAP Analytics Cloud does its heavy lifting in the browser’s JavaScript engine. This is the same whether the user is working with stories or apps. When apps are being used, the scripts written by the designer also run in the browser JavaScript engine. In the cloud data center, SAP Analytics Cloud uses a multi-service architecture and one of those services is the R engine. The workflow for R widgets works as so.

1 -The data attached to the widget refreshes.
2 – The R script executes
3 – The results are passed to the R widget in the browser for rendering
4 – The onResultChanged script event is called and executes, if it is an app.

This last part might be of interest. When used in apps, the R widget has both an R script and a JavaScript script event. The Javascript script runs after the R script. Furthermore, the R runtime can be seen and manipulated from the JavaScript runtime. The R widget script method getInputParameters() returns an object with getters and setters for reading and setting the input parameters for the R widget. If any of the set methods are used, the R widget will be re-run with the new input parameters.

The r widget has another script method, getEnvironmentValues(). The object returned by this method has a getNumber() method. In case you have not made the connection yet, you can fish R variables out of the R runtime and use them in your script. You don’t even need to render anything using R and can leave the widget set to invisible in the styling pane. These two things together let you use R as a de-facto global data science script language in applications.

Take a look at the simple app below. It has a chart and a table, both displaying two measures; the Gross Margin actuals and the predicted (Plan) values. Let’s calculate the coefficient of correlation between them. 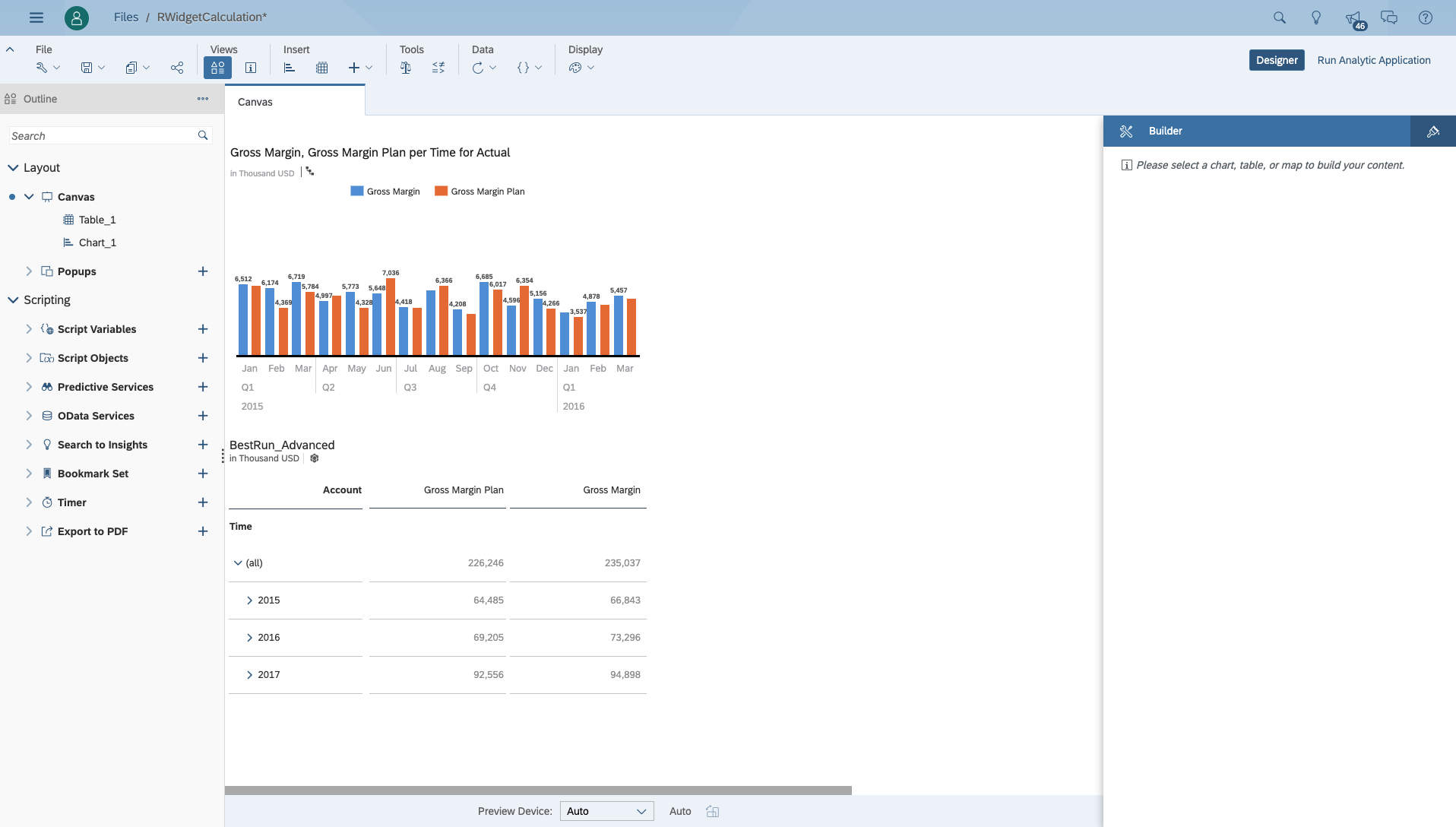 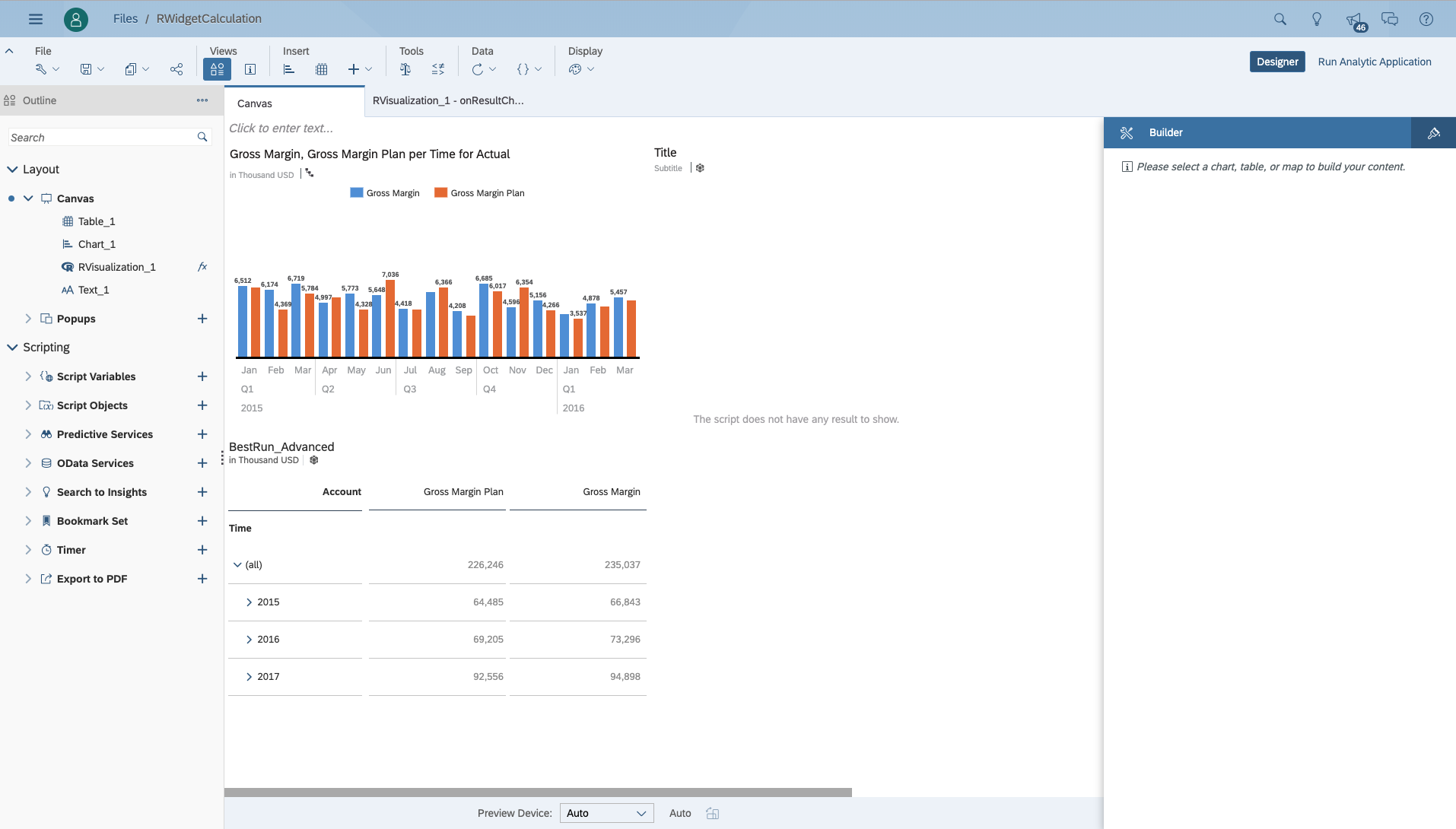 Set RVisualization_1 to use the same two measures as the table and a dimension, so that the R data frame is tabular. R’s corr function can’t calculate a coefficient of correlation between two numbers; it needs two lists of numbers, so we need a dimension. In the R script, enter a script that gets the two measures and calculated the coefficient of correlation. 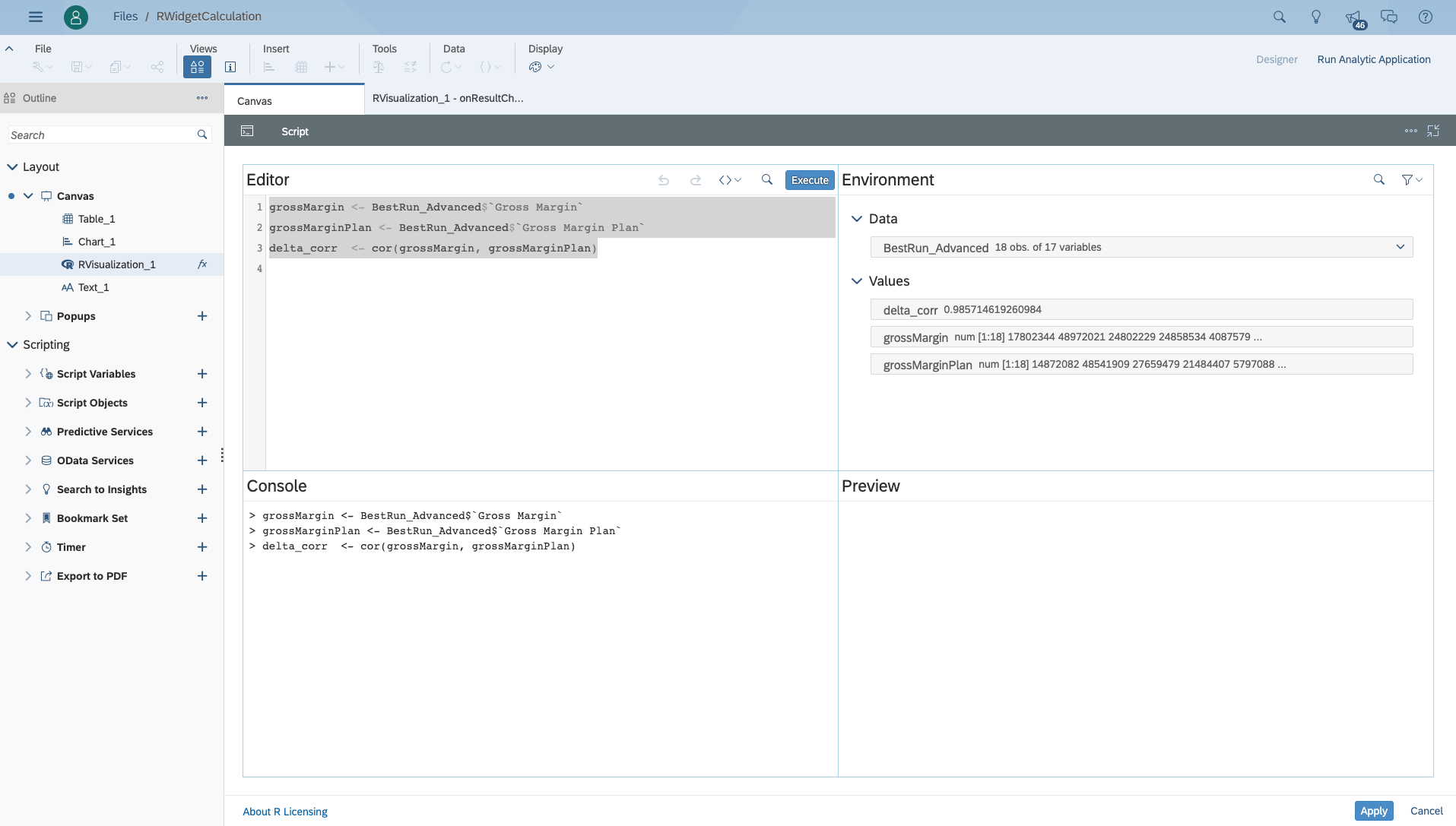 In the onResultChanged() script event, add a script that gets delta_corr from the R environment, converts it to a string and applies it as the text in Text_1.

Now we can show the coefficient of correlation to the end user. Hopefully, this will fuel your creativity and you’ll come up with your own ways to enhance your apps using R. 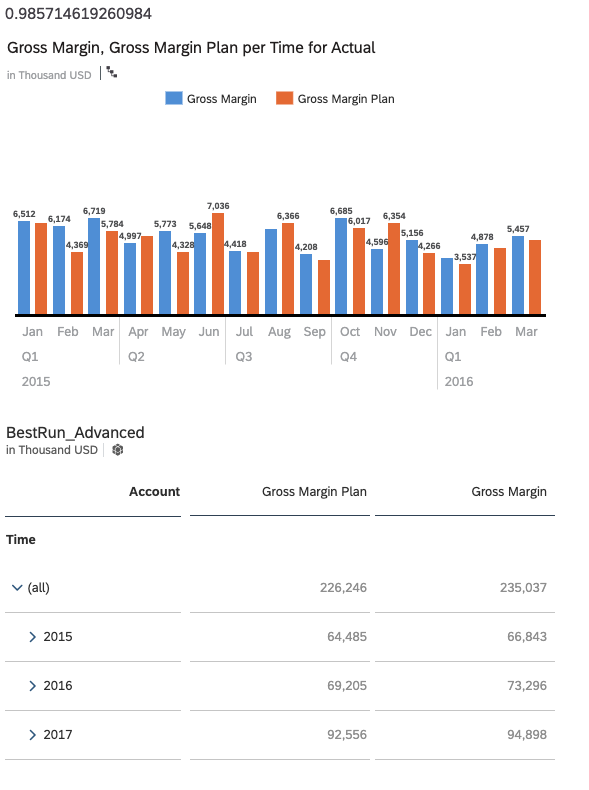 Thank you for sharing useful information

Great example of using R in Analytics Designer, David! There aren't too many examples of using these advanced APIs online at the moment. It's greatly appreciated!

Is there a way to access Data Frames from R in Java script runtime?

Have you managed to get a solution this?

I didn't get the proper solution but applied  the work around i.e. to create dynamic variables for each row of the R-data frame and then accessed the variables in Java-script.