Identifying the dormant/inactive users is a critical task and possess a risk to an organization or company. A new userid is created in SAP systems, whenever any new employee is on boarded or requests access similar to other employees. However, very few organizations reviews their access and usage. It is a best practice to identify, review and take appropriate action on dormant/inactive users regularly so that there wouldn’t be any issues related to license and audit

Prerequisites: Have SAP IDM in your company landscape and it is your leading Identity management System. 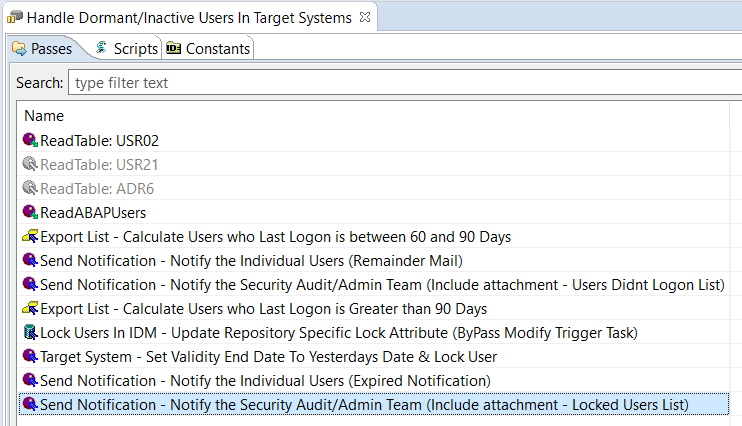 Usually the below passes are not required, by can be used in the following scenarios

Either of the below passes can be used to retrieve the user email address. Reading the data from tables is much quicker than using the BAPI call.

ReadTable: USR21 & ADR6 – Retrieves email address of the users maintained in the target system. Usually if SAP IDM is your leading identity management system, the data would be in sync between IDM & target systems, so email address can be retrieved from IDM based on the user logon name.

A mail notification is triggered to each individual user falling under above mentioned criteria, stating that your account would be locked if you doesn’t logon or use it by end of this month.

The users list is sent as a mail attachment to the Audit team for reference.

We doesn’t update MX_LOCKED attribute, as it would lock the users in all the systems he has access too. There would be case where the user wouldn’t be using System A but would be using System B. Hence to handle these cases, a repository specific attribute needs to be created in IDM, so that the user would be locked in that particular system alone.

The reason why we are bypassing modify trigger task is that, if there are bulk users then many event tasks can be triggered and affect system performance, so to avoid it you can by pass the modify trigger task and directly lock the user in target system using below pass.

Note – Use bypass modify trigger only when there are more number of user accounts to be handled.

Note – Lock the Users directly in the target system, only when there more no.of accounts else, lock them up by using above pass with out by passing the system privilege

The expired users list is sent as a mail attachment to the Audit team for reference.

The job can be customized depending upon the company policies.

Kindly provide your feedback regarding this blog and let me know in case of any suggestions or improvements further.

Do let us know how you would be handling the active users who haven’t logged in for more than ‘N’ No.of Days

Excellent blog Deva! Thanks for sharing it with the community.

Thanks Petrov for you feedback

Perfectly explained. But one question here. If we wanted to send the remainder notification, before 15 days, if user not responded then we need to disable. How can we handle the situation.

The job can be customized accordingly. so in your case, you would like to notify user 15 days prior to his account expiration.

If my understanding is correct, then you can schedule a job to run on daily basis, calculate users who didnt logon for 75 days & trigger remainder mail.  I have considered your locking policy as 90 days.

For users who didn't logon for more than 90 Days lock them.

Excellently provided the details. Actually we are looking for this to be implemented.

I am actually new to IDM. Can you please provide some detailed steps in implementing this if possible.