SAP Ariba is considered to have one of the best solutions for Contract Management. Ariba Contract Management is an end-to-end solution designed to eliminate paper and ink from creation, execution, and management of any type of contractual agreement. It has the following benefits: 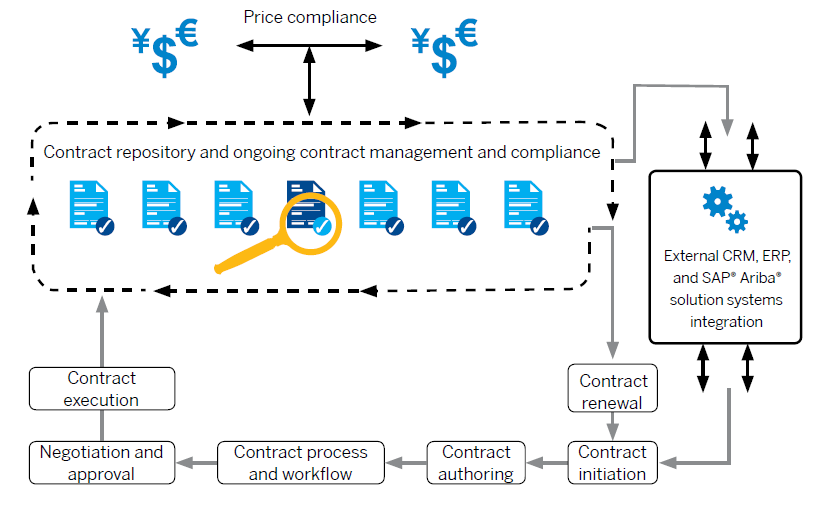 While all the above would satisfy the needs of a customer / client requiring a robust contract management solution, there is not much information out there around migration of contracts to Ariba for an implementation. I have been recently involved in a Major Business Transformation project for a client who implemented S/4 HANA and SAP Ariba. As data migration is part of any implementation, we were tasked with migrating existing contracts to Ariba for Go-Live. I share my experiences below on the issues faced, methods adopted to resolve issues / restrictions and automation of the migration process.

General instructions on how to import contracts

When importing legacy contracts, one must submit a ZIP file that contains the following CSV files.

Step 1: Assemble a ZIP file containing information about the contracts to load.

Step 4: Browse the ZIP file that is required to be imported and click Import 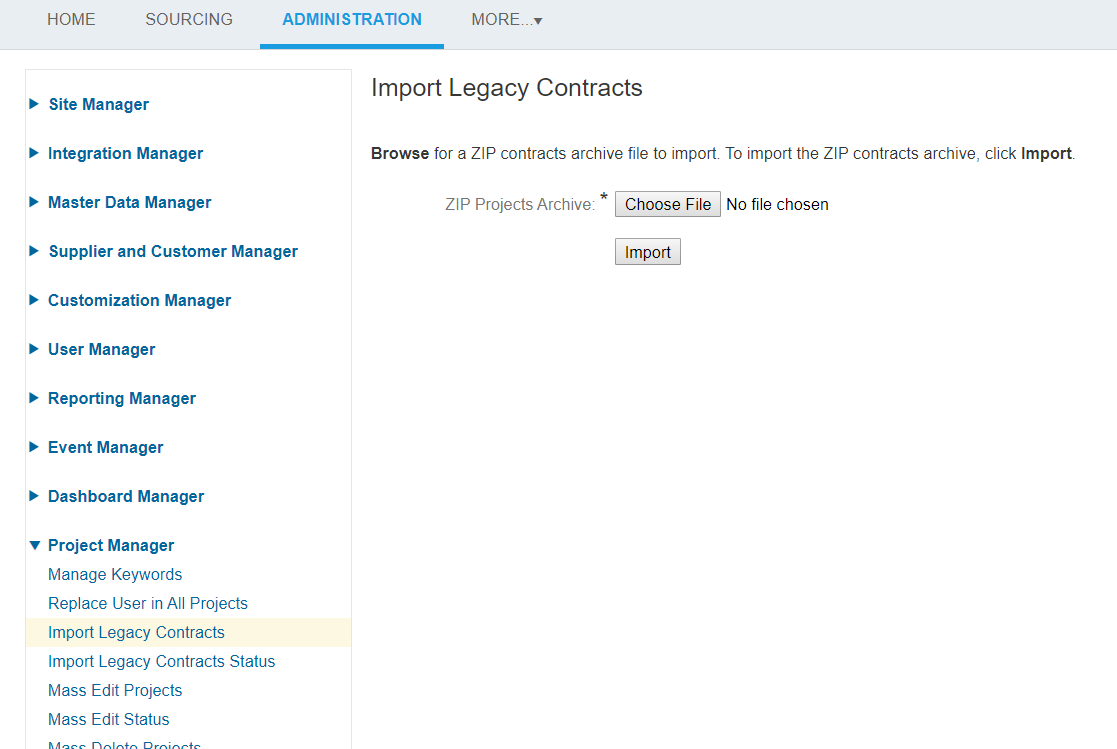 Step 5: Click Project Manager → Import Legacy Contracts Status to check the status of the load. Once the status is ‘Completed’, the contract load is finished. Click View Details for details on the load and any errors that occurred.

No specific instructions and no tools?! Where to from here? 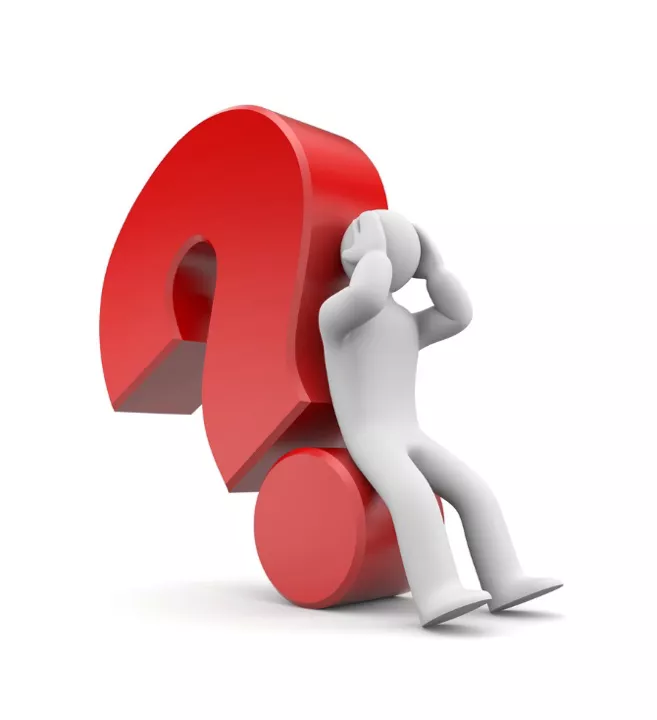 So how did we do it?

My client had no repository of contracts, they were scattered across emails, excel sheets and physical documents. We started with collection of existing contracts in an excel spreadsheet which ended up becoming a maintainable contract register for my client up to Go-Live.

We used JavaScript code that

Selenium was then used to automate the clicks on Ariba (steps 2 to 4 listed above). From start to finish of import, it could take anywhere between a couple of minutes to half an hour depending upon the number of contracts loaded in one ZIP file. We will have to introduce a wait time to pause the automation and then read import status, which might be too soon or late based on the processing time of the ZIP file. Hence, this was not part of the automation.

Once the entire load was imported using automated clicks, we provided the Ariba consultants with the contract ID numbers that were loaded. They were able to query the backend of the system and confirm if the contracts were loaded successfully. Any contract IDs that were not confirmed were assumed to have failed load. This was the alternative for Step 5.

Some key restrictions to be considered

How did get around the above restrictions?

We decided to create one ZIP file for one contract. This approach meant that

By following this approach, yes we did end up with 1000 ZIP files for 1000 contracts! This did not seem to be a huge problem J

We automated the creation of ZIP files, which made sure there was no nesting. Time consumption was dependent on a number of factors like – template structure, contract information loaded (like documents, team members), processing time, etc. There is no alternative to reduce the processing time. We tested a full volume and noted the time taken for the end-to-end load process. We made sure this time was allocated during the cutover for this process to be completed successfully.

Lastly, by automating the assembly and import of contracts to Ariba, we made sure manual effort was spent on analysing errors / correcting them.

While researching possible options for this project, I picked up that NTTDATA has a Legacy Contract Migration tool that automatically converts all legacy contracts – paper, PDF, scanned images and more to a ZIP format and size compatible with SAP Ariba. The tool is platform agnostic and will support any OCR tool. It validates contract attributes against SAP Ariba master data during the ZIP file creation process, not during import. It sends any detected errors into a log for correction, without the need for recreating and reloading contracts. The result: accurate, streamlined contract migration to SAP Ariba in one-third less time. 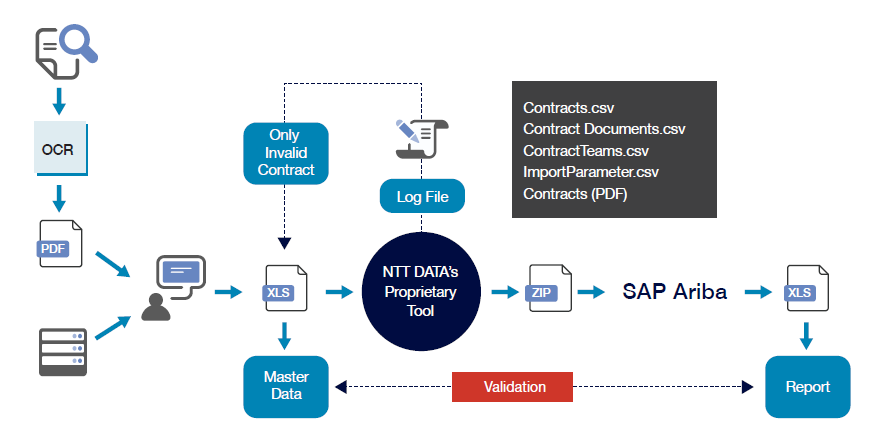 Unfortunately, I did not have the opportunity to use this tool for my project. However, this would be absolute magic for any project!

Due to restrictions and lack of detailed guidance, contract migration is not easy until you work out a pattern / process that works for you. The recommendation from Ariba team is to schedule contract migration as early as possible as it is a time consuming process. That being said, it would be great if SAP could develop further guidance / instructions for migrating contracts in the future.

Thank you for writing the blog, very interesting.  Do you know if there is a way to automate the loading of contract and also attachments via an API or is the only option the csv route and manual addition of attachments as you describe above.  Cannot seem to locate much information on this process at all online?

We did not find any method to automate via an API. This is the only method I am aware of. Attachments can zipped along with csv files and loaded using the method above. Something to keep in mind while loading attachments is the size of the zip file.

Where I can find the contract upload csv templates. Also. What will happen to existing data, will that overwrite existing file. Pls advise

We had someone from SAP to help us with the templates. Please see this link for more info.

One of the restrictions for using the method is actually that this featurre should not be used to reload contract workspaces that are already loaded. I have noticed that if a contract is reloaded (i.e. referencing the same contract ID) - it does overwrite information. But not all fields are overwritten (this would depend on configuration).

Where can we download this tool or buy a license to use it?

If you are talking about the import features via csv files - that is a standard functionality available with any Ariba implementation.

If you are asking about the NTT data tool - then sorry I don't have much details. I came across this information during research but did not have an opportunity to investigate further. Please check their website for any further details.

Hi - this is an interesting topic. I am looking to create hundreds of new Ariba contracts so is this something that could be used for future active contracts? I am told that there was support note 183398 for bulk creations/updates so perhaps you could advise on that?

Apologies for the late response. I'm not across the details on that. Maybe you could check directly with SAP / Ariba support teams

Thanks for writing detailed blog on contact migration. It is extremely helpful.

Nice documented approach .By any chance you have the approach for exporting the contracts out from Ariba System . We would want to export out certain historical contracts ( along with all the attached documents). Our Ariba contract management system is standalone and not integrated to ECC.

Thanks for detailed blog, it was really helpful.

Do you also have information on how we can migrate legacy supplier risk data in ariba system. Which templates to use and whether legacy document can be imported or not.

Its been a long time for this thread, but I have also the same requirement. I am curious to know if now we have some thing other then selenium like api or connector to automate import legacy contract.

I haven't heard any

Hi Devi - Thanks for sharing information.

Could you pls share the CSV file template used for contract import?

Please consult with the SAP Ariba consultant in your team as the csv template for data migration is dependent on the contract workspace template configured. Also check this link for more information.