In any city mobility is a key difficulty be it going to high school, college and office or for some other reason, residents use the transportation system to journey in the city. The U.S. Department of Transportation has been researching and testing a system of vehicles for the past few decades that can sense and communicate the environment and other vehicles around them. This is called vehicle-to-vehicle and vehicle-to-infrastructure communications. It will enable the safety, mobility, and environmental advancements that current technologies are unable to provide. 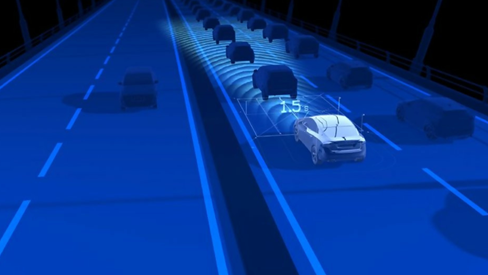 It is estimated that this technology will reduce unimpaired vehicle crashes by 80 percent. Furthermore, it will also reduce the significant number of hours that people spend in traffic annually.

This is going to be achieved with the help of advanced technology and applications including computing, sensors, communications, and controls which is called intelligent transportation systems.

As population and congestion increase, available lands and funding for new roads decrease. The demand for travel is expected to increase by 50% over the next 20 years. The construction of more roadways and roadway lanes is no longer feasible or credible in many areas as the primary solution to traffic congestion.

The use of ITS technology, Improves the safety, convenience, and productivity of personnel and the already available infrastructure as well as the communications and information to deliver informed and efficient mobility and transport.

Traffic and weather information can be broadcast to vehicles for display as a text message or information on maps. These systems are already in service and enable drivers to make informed decisions not to drive in conditions they would find difficult or dangerous.

Cars are equipped with advanced GPS systems that can be described as a “co-driver who knows the way”. Navigation systems are in service that guides a driver to a selected destination, giving advance warning of junctions and necessary maneuvers such as lane changes. Vocal instructions along with turn-by-turn visual guidance reduce memory load and visual interference with the primary driving task and offer the most dramatic improvement and error reduction of older drivers’ performance. These systems certainly reduce driving stress and reduce conflicts and accidents by avoiding the need to make lane changes or turns shortly before a junction.

Systems already exist to detect obstacles behind and front of a vehicle during low-speed maneuvers such as parking. Prototypes of similar systems can warn of vehicles in blind spots and from the sides when converging during merges and lane changes. These can warn the driver and prevent conflicts and collisions.

Several systems are being developed to improve vision for drivers at night. Some allow the driver to see objects directly through the windshield, and others project a processed image onto a display screen in the vehicle dashboard.

Night vision technology illuminates the roadway to the front which is outside the visible spectrum of the vehicle with ultraviolet or infra-red radiation to enhance visibility directly. The technology also processes the radiation reflected back to the sensor array and generates images of objects that would not be visible to the driver’s naked eye. Other systems generate images from thermal energy emitters (particularly living beings) in the environment. The detection range for pedestrians, obstructions, and curves in the road can be increased considerably. Some of these systems are based on night-vision technology already in military service.

Intelligent cruise control (ICC) is a system for controlling a vehicle’s speed and distance behind a preceding vehicle. ICC allows controlling the vehicle’s speed to a pre-set value while maintaining a safe headway between vehicles. Future variants will tell the driver if the pre-set speed exceeds the local limit, and ask if the driver wishes to comply. They may take control of the accelerator and brake to prevent rear-end collisions if a dangerous situation is detected. Further, into the future, ICC systems may automatically limit the vehicle speed to the local limit and reduce speed when approaching a bend, a yield sign or a red traffic signal. Local speed limits could be varied by time of day or weather condition.

Development is well advanced for systems that monitor the condition of the driver and warn of impairment by fatigue, alcohol or a variable disability. These are likely to appear first on commercial vehicles, but could well be applied to cars in due course.

Some vehicles are equipped with the system that displays road signs inside the vehicle and warns drivers of hazards or unusual conditions ahead. This system uses extensive monitoring of road conditions and many transmitters to relay information from the road to the car. Details of road signs are stored in the digital map of the navigation system, to display the information at an appropriate time.

Occupant protection systems such as seat belts and airbags are designed to protect a large male occupant in the most severe survivable accident. Because of this, they may apply greater forces than are necessary to people who are small, light and sit near to the steering wheel. In particular, they may cause injuries to a fragile older person in a relatively minor accident that could have produced no injuries if the restraint systems had been tailored to the attributes of the specific occupant. Occupant protection system uses sensors to measure occupant weight and sitting position, and a smart card to define occupant age, gender, and other characteristics as well as automatically positioning the seat, mirrors and steering the wheel to suit the individual. In a given crash, the system would then adjust the loads applied to the occupant to be the lowest necessary to restrain them.

Similar to technology commonly used for wireless Internet access, wireless networks allow rapid communications between vehicles and the roadside, but have a range of only a few hundred meters. However, this range can be extended by each successive vehicle or roadside node passing information onto the next vehicle or node. South Korea is increasingly using WiBro, based on WiMAX technology, as the wireless communications infrastructure to transmit traffic and public transit information throughout its transportation network. In addition to this, there are also some applications such as Vehicle Information Communications System (VICS) that uses radio wave beacons on expressways to communicate and showcase real-time traffic information.

Helping drivers to find parking spaces minimizes congestion and pollution. Charge rates can be sent wirelessly to meters. Motorists can pay from their mobile phone. Vehicles are also assisted with cameras that can also identify the blind spots which the driver cannot see during reversing the car. New technology includes the 360-degree view cameras and autonomous parking system in which the vehicle automatically is parked using this technology.

Benefits of Assisted Transportation System or ITS

Assisted Transportation Systems combines many different types of information and communications technology to create a network of systems that help manage traffic, protect roads and much more. As more and more parts of our transportation network become networked, ITS will change the way drivers, businesses and governments deal with road transport. These advanced systems can help improve transportation in several ways.

Unsafe speeds, dangerous weather conditions, and heavy traffic can all lead to accidents and the loss of life. Intelligent transportation systems help with all of these. Real-time weather monitoring systems collect information on visibility, wind speed, rainfall, road conditions and more, allowing traffic controllers with up to date information on driving conditions. In fully networked systems, this information can then be used to update warning signs and even speed limits as soon as the need arises, keeping drivers alert to the conditions around them. Emergency vehicles can respond quickly to accidents as real-time traffic monitoring alerts them. ITS traffic control helps divert traffic away from busy or dangerous areas, preventing traffic jams but also reducing the risk of collisions.

Heavy vehicles can put a lot of strain on the road network, particularly when they’re overloaded. Weight stations and other older forms of weight control reduce the risk of overloading but at the expense of wasted time and delayed traffic. Weigh-in motion systems measure the type, size, and weight of vehicles as they move, communicating the collected data back to a central server. Overloaded vehicles can be identified and appropriate measures are taken resulting in higher compliance among haulers and reduced damage to roadways. Not only do these systems make enforcement simpler, but they can also reduce expenditure on road repair, allowing it to be allocated elsewhere.

Existing centralized traffic control systems go some way toward alleviating traffic congestion and ensuring the smooth flow of vehicles through a road network. Intelligent transportation systems, however, allow traffic lights to respond to changing patterns themselves. Adaptive traffic light systems create smart intersections that control traffic in response to the patterns they observe among the vehicles using them. They can also prioritize specific forms of traffic, such as emergency vehicles or public transit. Large numbers of adaptive intersections working together produce a system in which lights change in response to traffic patterns rather than on a fixed schedule, reducing weight times and keeping traffic moving smoothly.

Instead of taking their chances with a human parking enforcement officer, drivers know they will automatically be cited for illegal or extended parking. These automatic systems help improve traffic flow by increasing driver compliance and a smooth turnover of parking spaces.

Proper traffic planning is impossible without detailed data about road use patterns. Existing traffic sensors can learn a lot about how many vehicles use a particular road or intersection, but intelligent transportation systems can do much more. Electronic traffic counters can measure the number and type of vehicles using a particular road or visiting a particular part of a city, as well as peak traffic times, journey length and other data. This information helps authorities allocate their resources in the most efficient possible way.

As ever-growing populations of urban drivers and commuters put more and more stress on our road network, cities will need new and better tools in the constant struggle to prevent traffic congestion and keep drivers safe. The ever-growing ITS revolution represents a new way to think about traffic and road network management.

Camera or tag-based schemes can be used for zone-based congestion charging systems, or for charging on specific roads. Such systems use cameras placed on roadways where drivers enter and exit congestion zones. The cameras use Automatic License Plate Recognition (ALPR), based on Optical Character Recognition (OCR) technology, to identify vehicle license plates. This information is passed digitally to back-office servers, which assess and post charges to drivers for their use of roadways within the congestion zone.

As population and congestion increase, demand for travel also increases, so is the need to construct more roadways and roadway lanes as a primary solution to traffic congestion, which I most cases not very feasible and costly. Assisted transportation Incorporates advanced management techniques and technology to improve productivity, increase efficiency, and Integrates and facilitates coordination between relevant systems and programs. It also improves the productivity of the already available infrastructure. It applies innovative and advanced technologies to make the transportation system safer, more efficient, and more customer service-oriented. It has the ability to learn and adapt to changing scenarios and provides travel information before and during the trip for better decision making.