Each chapter in the book starts with a quote and for the second chapter where we provide a technology overview of SAP HANA, we have Joseph Licklider and Steve Jobs.

Everyone reading this article will know Jobs but I expect few to be familiar with Licklider, yet my guess is that most will have read or heard this quote before.

If you are not familiar with Licklider, I recommend to read this short article on Wikipedia: J. C. R. Licklider (spoiler alert; he was involved in the early stages of the GUI and the Internet).

Now, before you all start to post comments that it wasn’t some obscure scientist who came up with this insight but actually Bill Gates, see evidence #1. You can read the book online here, with thanks to the research by the Quote Investigator.

Gates was 10 at the time, so an unlikely source, but he did bring it too the masses as he did with so many things. Google the quote and you will get a lot of hits with Gates up, front, and centre. If you really like it, for $20 you can get a tile with the quote on Amazon.com.

How come Gates gets the fame?

Well, in 1995 Bill Gates published the book “The Road Ahead”, about where he thought technology was going. Ironically, already within a year a much revised update was published to include the impact of the internet and in the afterword he started with the maxim (article on the book in Wikipedia). It took decades for the internet to take shape but when it suddenly became of interest for businesses  in the mid nineties, it really took off which took many, including Gates, by surprise.

What about the road ahead today?  What about current technologies like self-driving cars, Artificial Intelligence and Machine Learning, for example? What can we do in one year, and what can be done in ten?

On this topic, I enjoyed reading Everyone’s talking about artificial intelligence. But what is it? from Sanne Blauw in the Correspondent, also addressing massive surveillance and deep fakes. 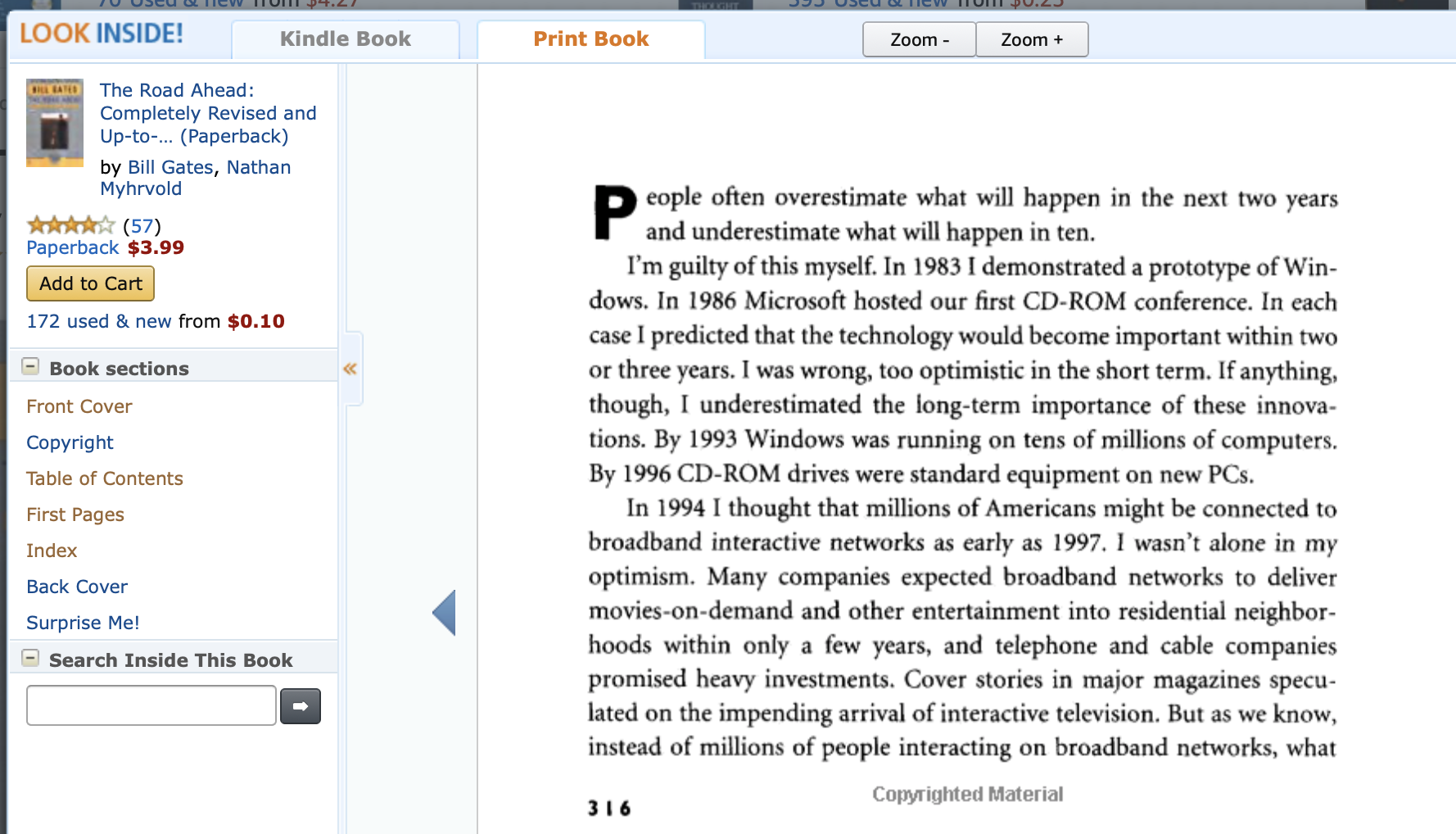 Gates is busy with a lot of other things these days. For those on NetFlix, a documentary has just been released, which I enjoyed watching. You can also follow his activities on gatesnotes.com.

The next quote is an interesting one from an industry peer of Gates.

When to release is one of the most difficult marketing decisions to make in many industries and software is no exception.

The quote and the chairman Jobs reference are from a web post by Andy Hertzfeld (member of the original Macintosh development team). Thanks again to the Quote Investigator. In the original manuscript, a long list of references to other material was included, which for space constraints and other reasons did not made it to the final book. This was particularly the case for the technology overview chapter.

Illustrations with fine print could not be include, so the 2012 SAP HANA Timeline with early success stories was left out. This is one (of many) illustrations made by Mighty Sparrow Graphic Design from Vancouver. 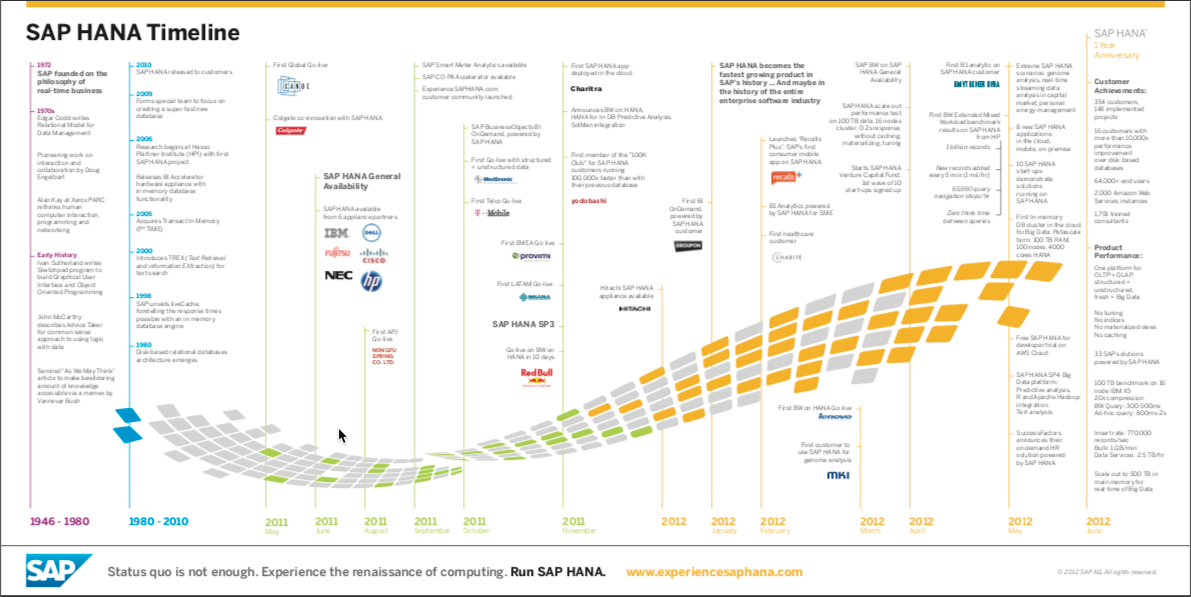 When discussing database history in a nutshell, covering latency differences between disk and memory, a link to this great graph Latency Numbers Every Programmer Should Know could not be included. In the illustration below, I have set the slider to 2005, when SAP acquired the Korean in-memory database company Transact in Memory. If you slide to 2019, disk latency is actually getting better, or maybe we should say, “less worse”.

See also the post Computer Latency at a Human Scale and Man Runs From San Francisco To New York In Record Time when comparing disk to memory as flying and running from SFO to NYC. 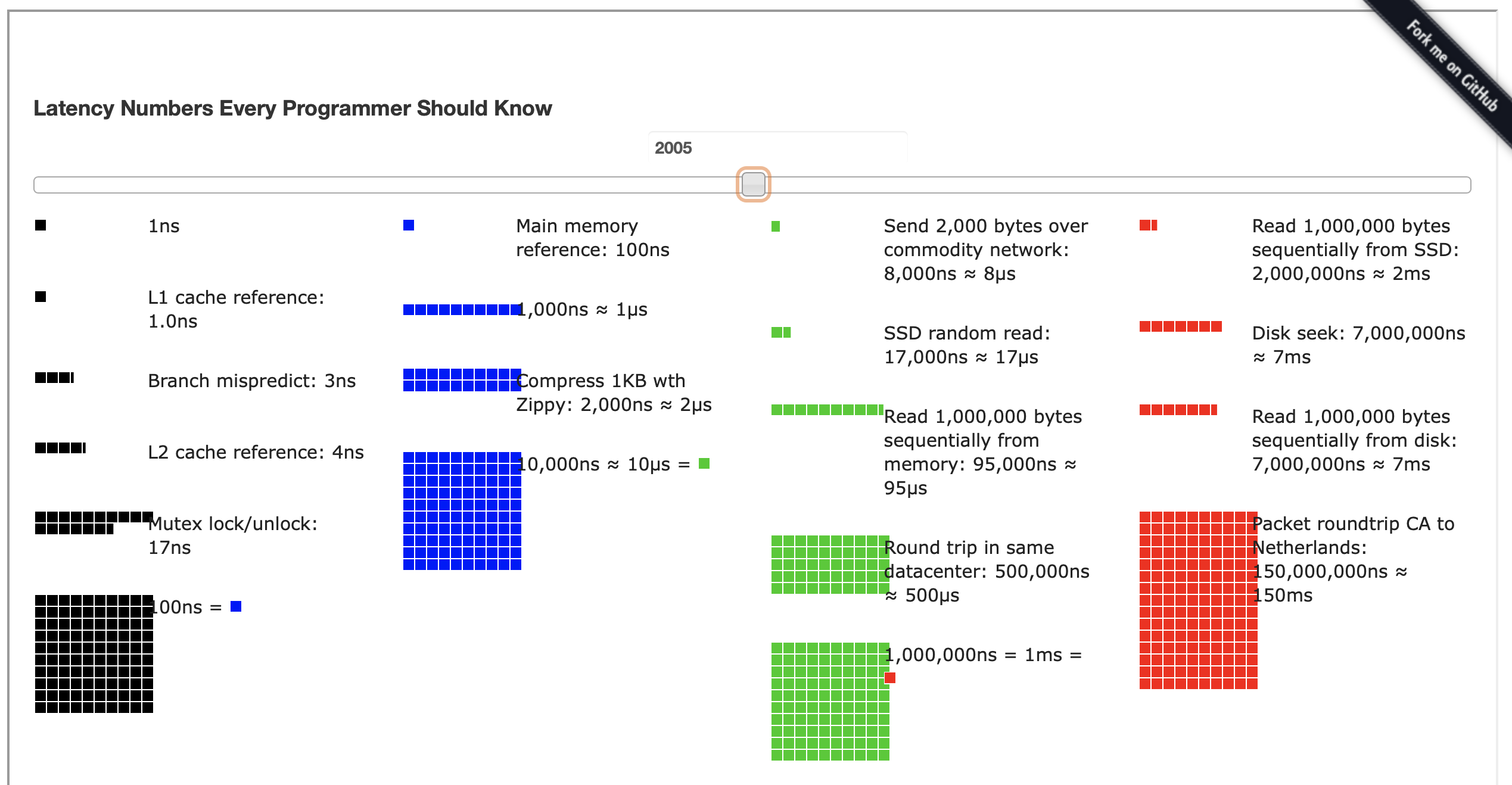 For research papers, see A Common Database Approach for OLTP and OLAP Using an In-Memory Column Database for the SIGMOD 2009 conference, SAP HANA Database – Data Management for Modern Business Applications for SIGMOD 2011, or The Impact of Columnar In-Memory Databases- Implications of Eliminating Transaction-Maintained Aggregates for PVLDB 2014. 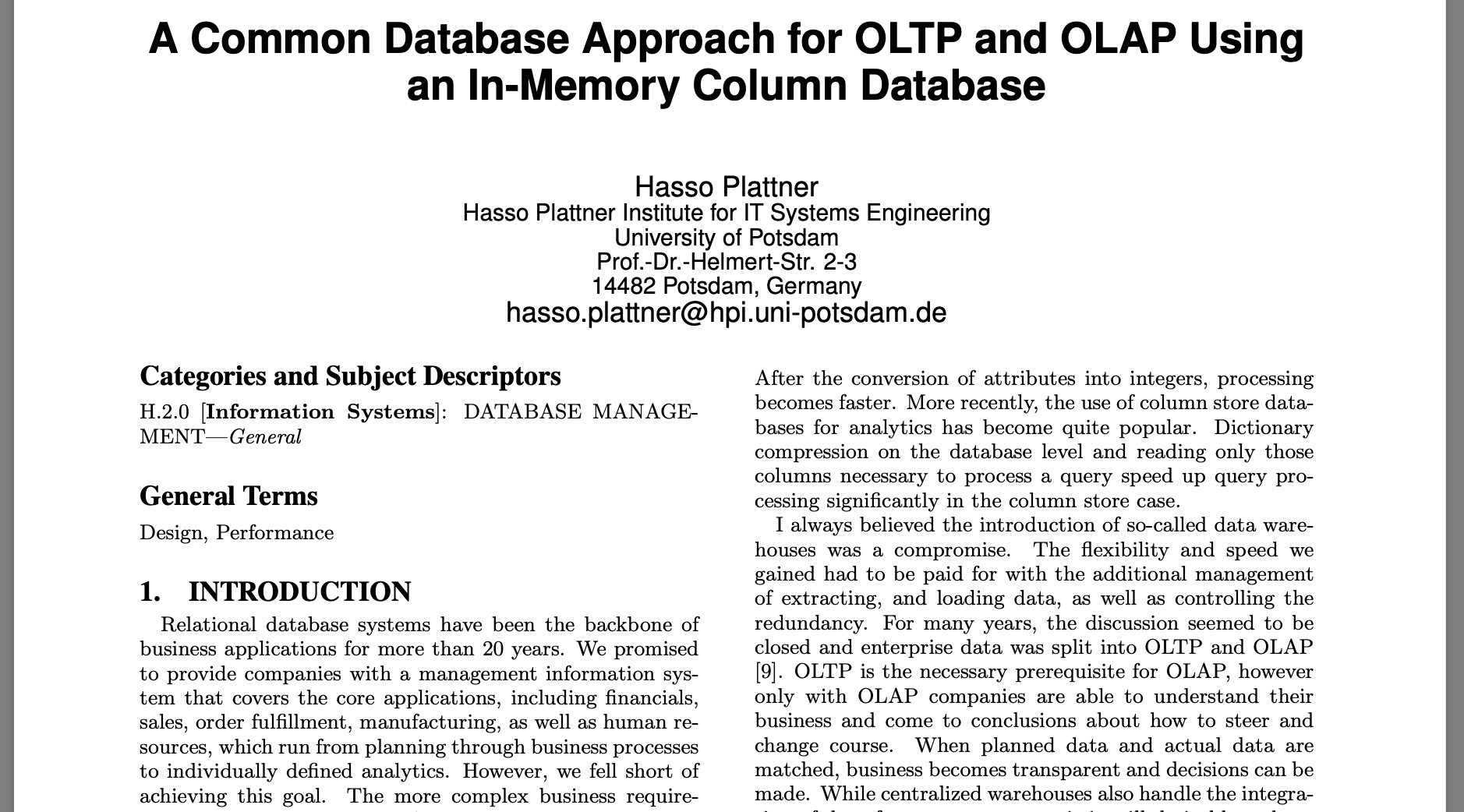 Research papers are a good source to stay up to data. The paper SAP HANA Adoption of Non-Volatile Memory, for example, was published long before the any product announcement were made.

You can search the website of the PVLDB (The Proceedings of the VLDB Endowment) for articles. For SIGMOD, see sigmod.org. And there is also a list of publications on the SAP SCN Wiki Scientific Publications and Activities of the SAP HANA Database Campus 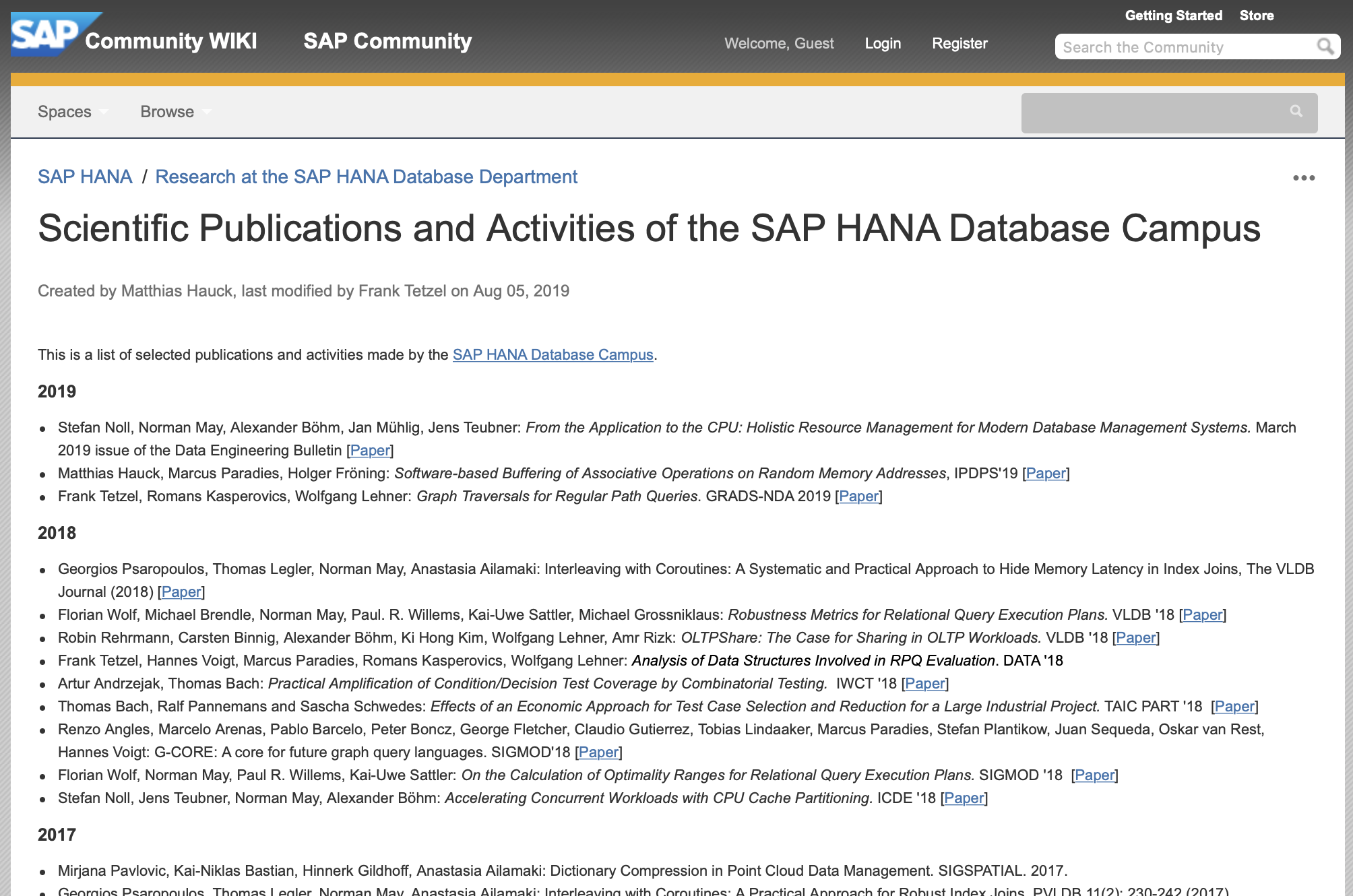 Apart from HANA, also MaxDB and P*TIME were originally university research projects, from the Technical University of Berlin (1977) and the Seoul National University respectively.

You can read a bit about Transact in Memory and P*TIME in the SAP News article SAP Labs Korea: A Cornerstone of SAP HANA. 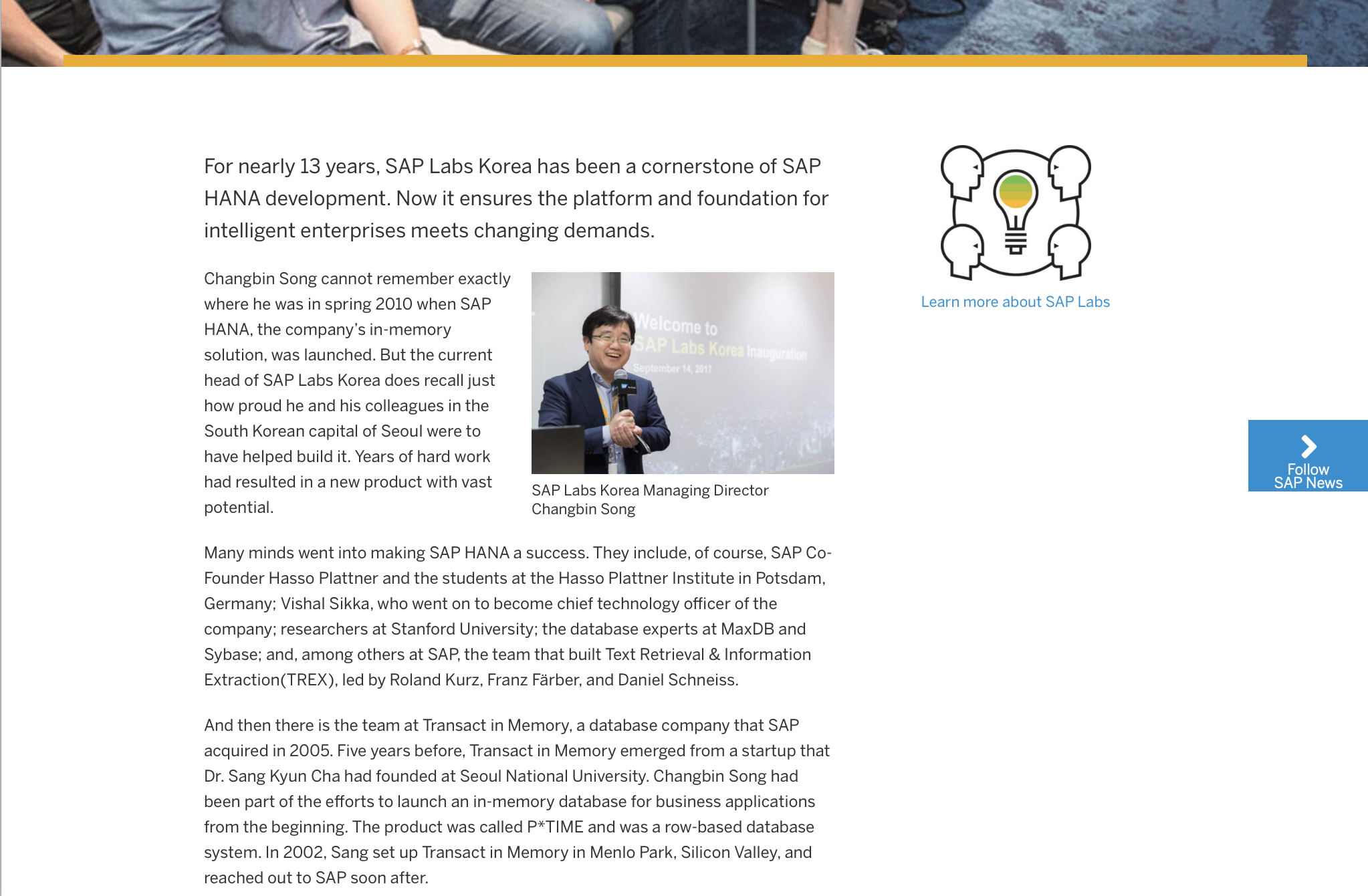 When addressing continuous innovation and timeless software, we mention Vishal Sikka on stage. Here is the link to the TED Talk, Vishal Sikka | TED@BCG: The Beauty and Power of Algorithms. Also included was a reference to the very first release note about SAP HANA (experts, correct me if I am wrong): 1533048 – SAP IMCE 1.0 Revision 0 for SAP HANA 1.00. Note the NewDB, HDB (Hybrid Data Base) and IMCE. (In-memory Computing Engine). 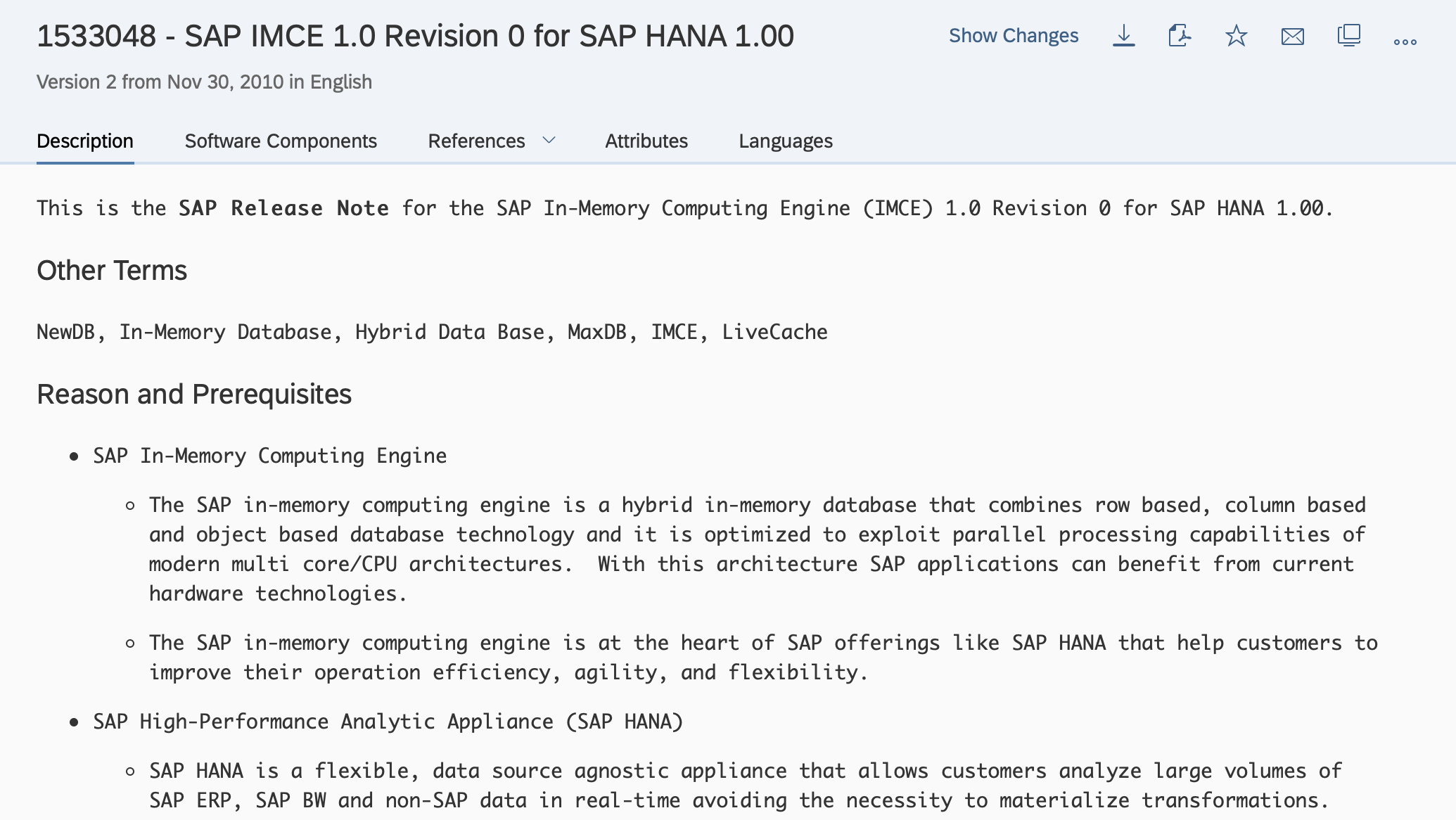 Much more! Apart from in-memory database concepts, in this chapter we cover system architecture, editions, release history of 1.0 and 2.0, the support package stacks and revisions, deployment options, and on-demand (cloud) versus on-premise.

I will use this for the errata as well.

Just noted that (ironically, given the discussion of the quote), in the book the quote is actually the one from Gates but attributed to Licklider!