While I am riding the train back from Barcelona to Mannheim – sustainable travelling to TechEd is possible (see related blog) – I have time enough to write a short blog about how Open Source was perceived at TechEd Barcelona this week (8.-10. Oct 2019). 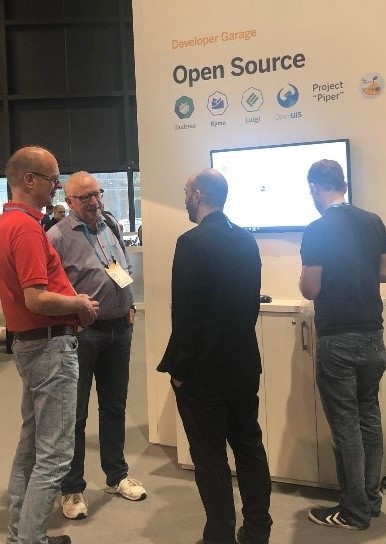 In general, customers and partners liked the fact, that SAP established an Open Source Program Office last year and SAP colleagues were positive about the simplification of the internal processes to contribute to open source.

I would like to recap some content of the discussions I had with customers, partners and colleagues over the past 3 days. Overall, it seems, that it is well perceived that SAP engages further in open source. Even an ABAP veteran visiting our booth admitted, that times have changed, development culture is different and open source, if applied correctly, has a lot of benefits: When a use-case makes sense for going open source, then it is a win-win for all (SAP, customers and partners).

A French manager, Xavier Guiguen, in charge of the Fiori team at Decathlon was frank about his perception of open source and SAP: „Recruiting good developers is becoming difficult for SAP projects“ – SAP is not chic for the new generation, who has never coded ABAP. „Pushing open source is a new trend“. Besides, he sees open source projects as inspiration and an open source culture goes along with a certain open-mindedness.

While Manfred Scheiner, Solution Architect in an Austrian consulting company, came across open source at SAP by accident when talking to experts about UI5, he was very excited to hear that SAP has not only published UI5 libraries on GitHub, but open sourced other frameworks as well. The advantage of transparent and easy bug fixing is a great benefit of open source, even when talking about sample code or learning scenarios which allow pull-requests in GitHub; more than 1000 tutorials are available in the so-called tutorial navigator and allow direct interaction via GitHub. Mr. Scheiner sees Microsoft as a positive example for a cultural shift towards open source and would like to see SAP engaging even more in Open Source.

Please read more about SAP’s open source projects and feel free to contact (mail to: ospo@global.corp.sap) the Open Source Program Office, if you have questions or suggestions.