To read what happened earlier, please check the prologue and Tuesday‘s post. For the TL;DR version click here.

Wednesday morning started bright and early with Markus Göbel‘s lecture about Paths to transitioning to SAP S/4HANA (CAA114) at 8 o‘clock. Some of the material naturally overlapped with other S/4HANA sessions I had already seen, but for me this was actually helpful as it puts things into better perspective for me if I hear them more than once and from within slightly different context. We learned that for a greenfield approach where you start with an „empty“ S/4HANA-system, you cannot take over your customizing or historical data. The most relevant information for me was the one about the selective data transition which comes with these items to consider: 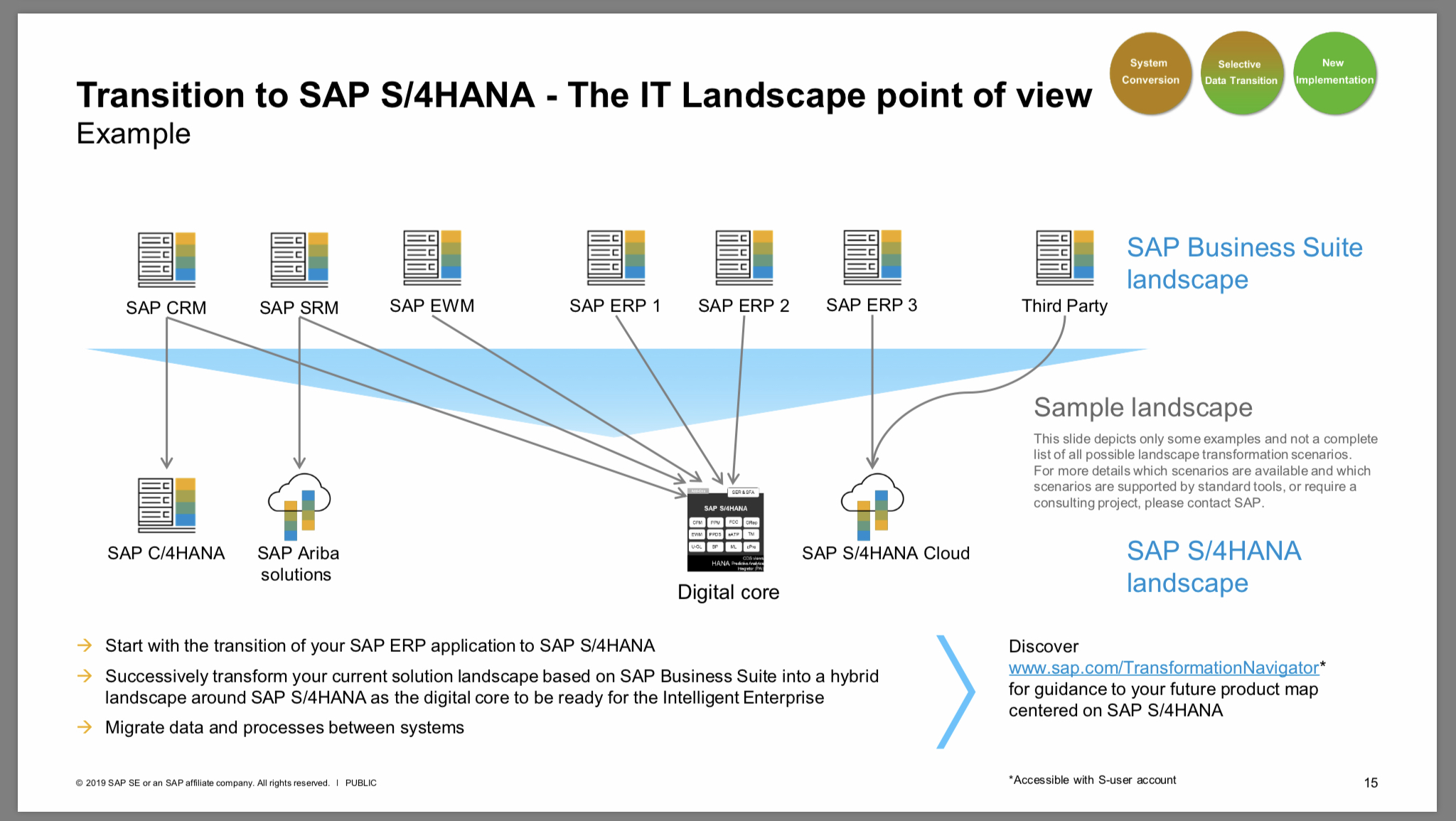 After the lecture, I headed up to the Showfloor for a recording of short answers about getting involved with SAP Community. The team ideally wanted to get each of the SAP Champions in front of a camera to provide tipd and tricks for newbies on SAP Community of how to ease into and get actively involved with it. So, yet another „chance“ after yesterday’s Fireside Chat to get out of my comfort zone and speak into a camera lense! This turned out – much to my surprise – to be quite relaxed and fun with Kim Mecca providing short questions like „How do you suggest newcomers start out in SAP Community?“ and me answering with repeating the gist of the question in a standalone sentence like „My suggestion for newcomers to SAP Community is to start with the available tutorials to get a better idea of what it‘s all about.“ (No clue what I actually responded with, but it was along those lines.) After perhaps 10 minutes and that many „questions“, Kim had all the responses she was looking for and I could head down to the first of two hands-on sessions I had reserved a space in for the day. 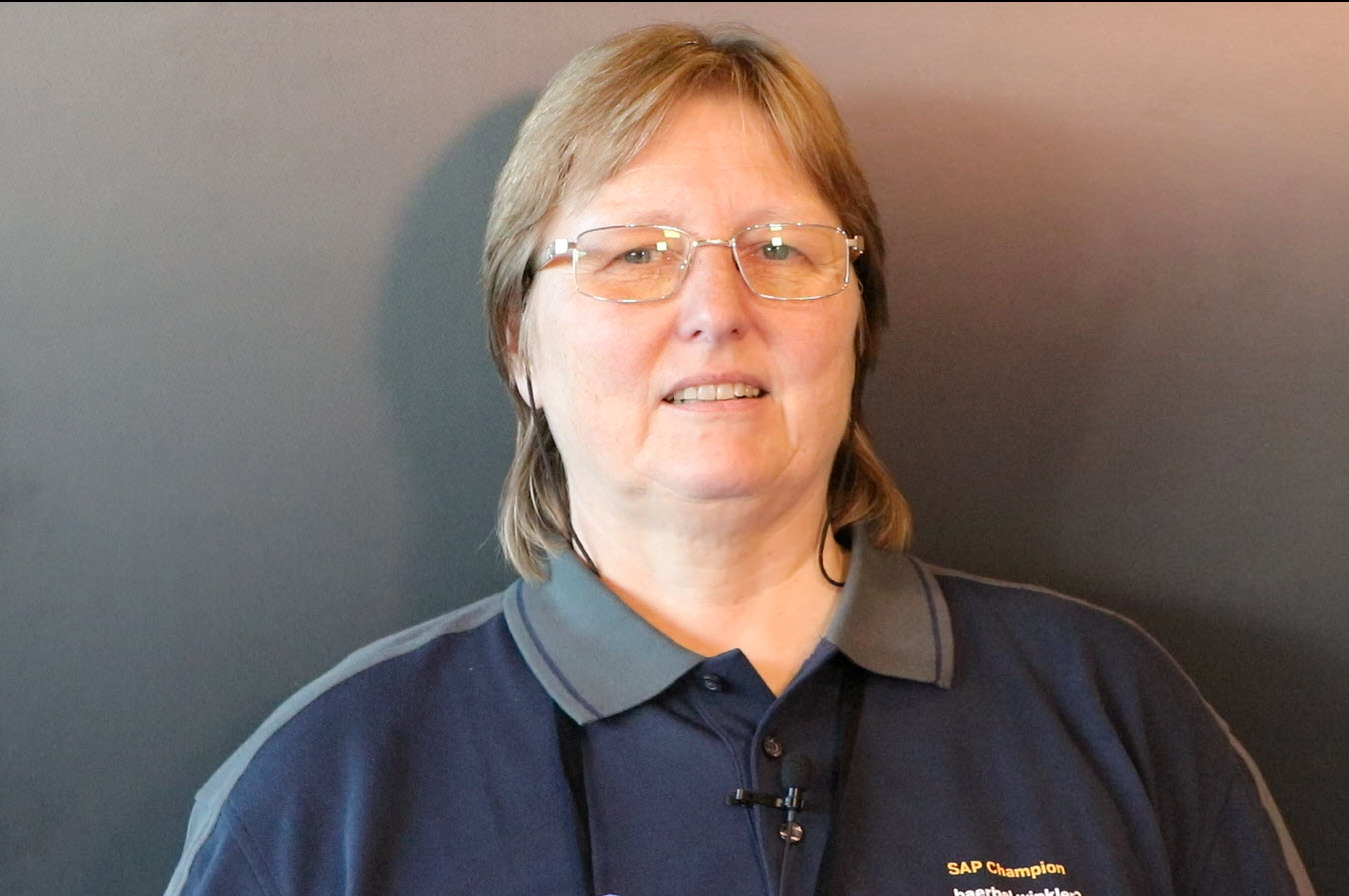 Still from the recorded interview – will most likely get replaced with the video once it becomes available.

The hands-on session I had picked was related to Roberto Machado‘s Tuesday lecture I had been in: Optimize your Custom Code for SAP HANA (CAA362). He and Felix Fabis started the session with a short recap and overview to set the stage for the exercises we could then work on in teams of two. My partner for the session was fellow SAP Champion Łukasz Pęgiel and I was quite happy to have somebody sitting next to me who already knew more about how these hands-on sessions are setup and the tools needed to work through the materials. The exercises turned out to be more time consuming than expected and not just because they involved many steps but also because we were running into some network and/or bandwidth problems. So, we only managed to get about halfway through the tasks but we then at least understood that CTEs (remember: Common Table Expressions) are basically inline CDS-definitions which can be utilized within an object. Lukasz brought up the idea to create a quick fix in ADT to turn such a CTE into a CDS view as needed which Roberto Machado made a note of. I could also imagine to work with CTEs in order to prototype a CDS view without actually having to create one for real in the data dictionary. 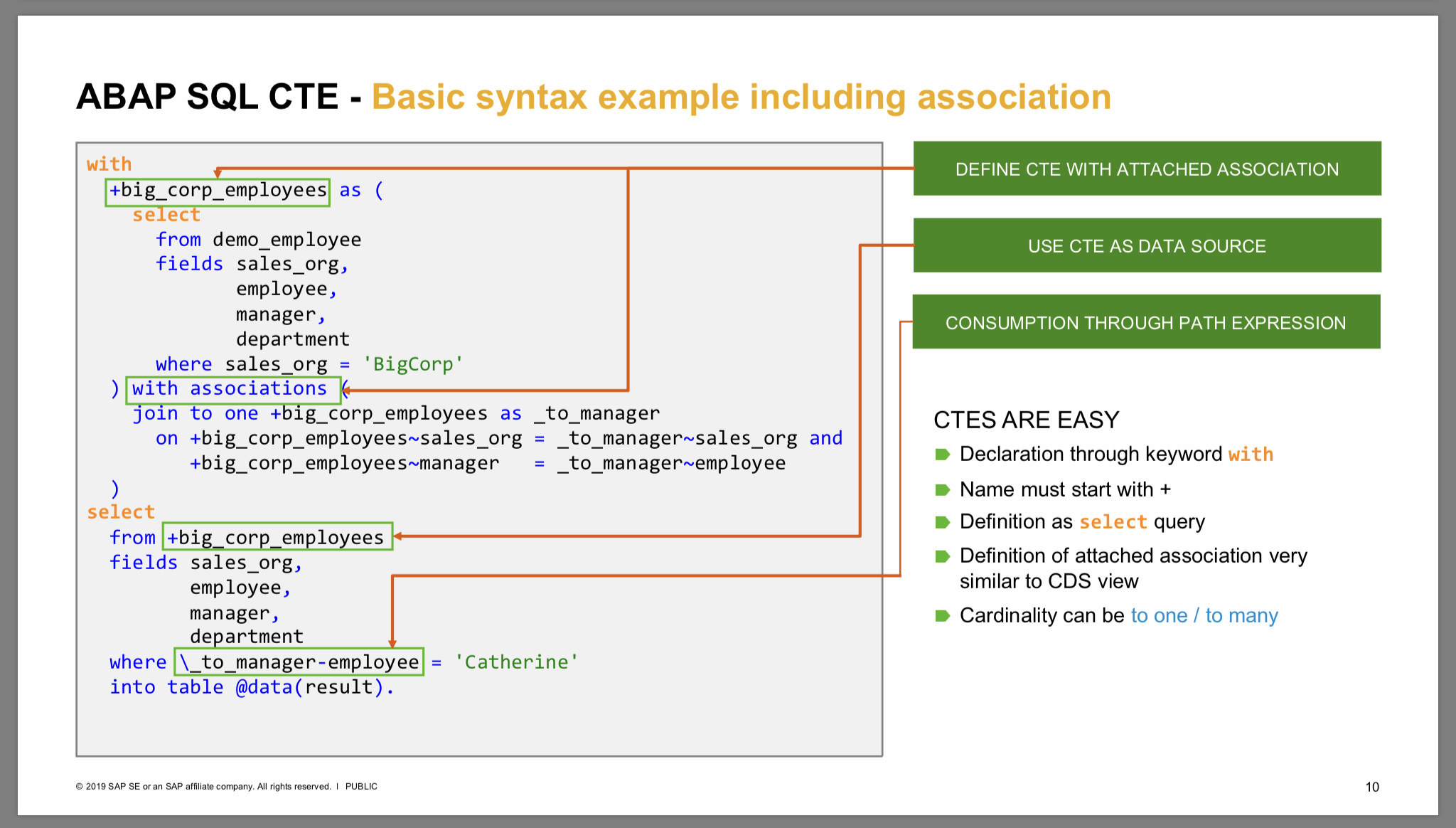 After this hands-on session we had „earned“ ourselves a lunch break and the organizers had made sure that we didn‘t get lost on our way from Hall 8 to Hall 7 by easy to understand signs displayed on the walkway screens! 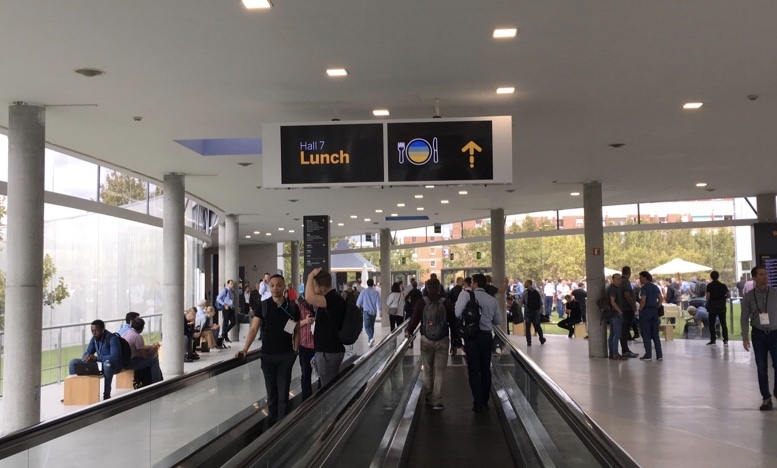 During lunch, Lukasz and I met my colleague Ilya Osetrov who had won one of the showfloor tickets in the SAP Community contest.

After lunch in the cavernous Hall 7 it was time for another hands-on session for me, this one about System Conversion: Get firsthand experience with the tools (CAA261) led by Matthias Klein and Boris Rubarth. This was a very well structured and timed session where short introductions of a conversion step were followed by 10 to 20 minute long exercises actually doing (parts) of it. The exercises made me thankful for the fact, that as a developer I wouldn‘t need to run through most of them in an actual conversion project as there are quite a lot of nitty gritty details and steps to juggle! But, it‘s still helpful to be aware of what all is involved. We managed to get through all the exercises within the 2 hour session, which is proof-positive of a very well planned session. 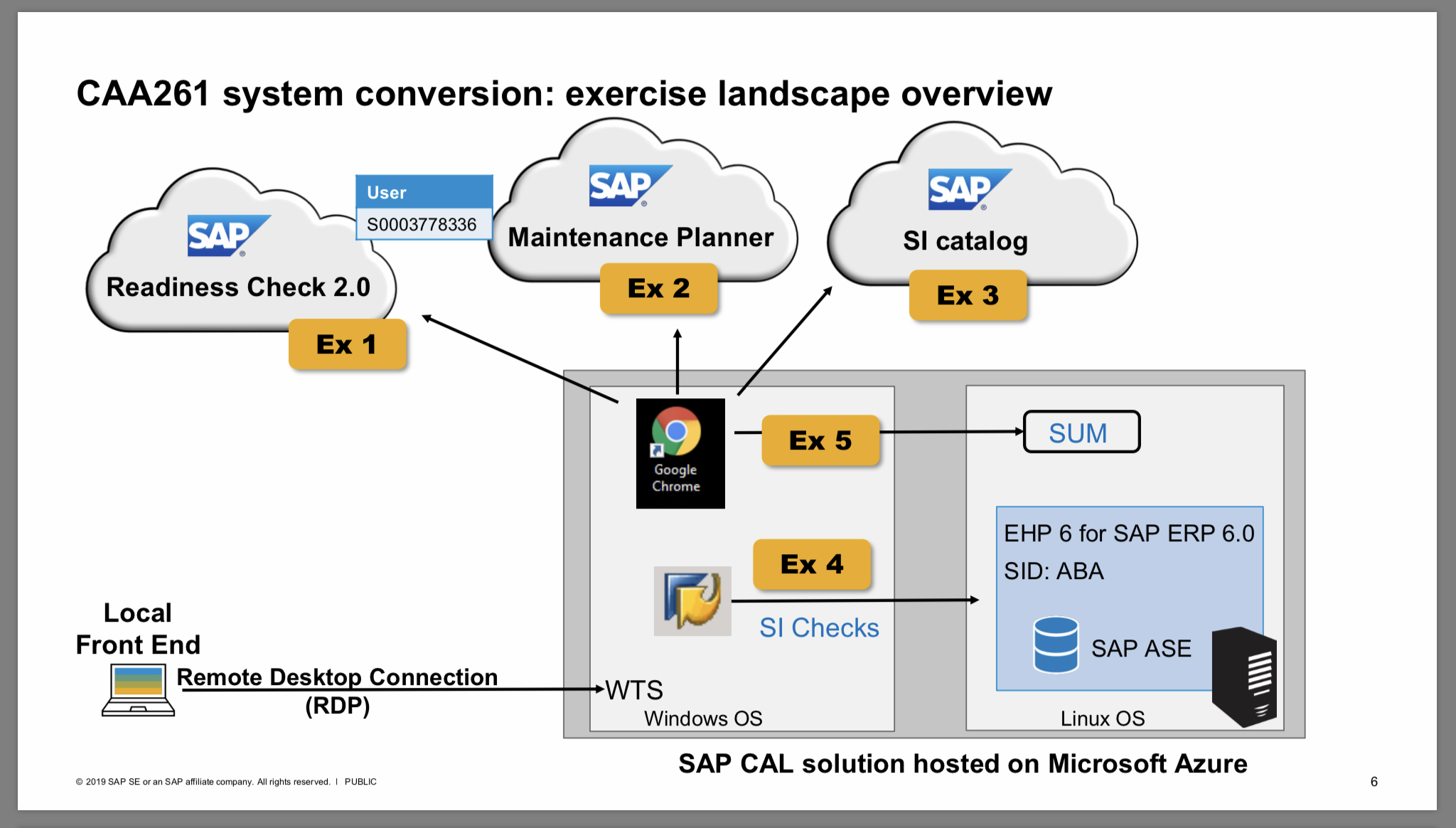 Seeing that the queue for the „head-shots“ wasn‘t overly long when I got back up to the Showfloor around a quarter past four I joined the line to get one as well before the next fireside chat scheduled for 5 o‘clock. It turned out to be a bit touch and go time wise as it took a bit longer than expected to get my picture taken, but the results received via email just two hours later made it quite worthwhile.

Wednesday‘s Fireside Chat followed the same general format as Tuesday‘s but with a slightly different set of panelists. I‘m fairly certain that DJ Adams enjoyed being in the middle of it with Malin Liden , Anne Johnson , Vanessa Schmitt , Katrin van Asen, Anne Kathrine Petteroe and myself flanking him! I couldn‘t contribute all that much to the main topics Malin had picked for this 30 minute chat, but just hearing the answers the other panelists gave helped to put some of the „new“ stuff into better perspective for me and hopefully also for the audience. For Malin’s final question about our key takeaways of the day, I mentioned what I had forgotten to include on Tuesday: how great it is to meet many people face to face which we otherwise mostly just interact with online. Overall it was somewhat more relaxed than Tuesday‘s session because we didn‘t have a camera trained on us. 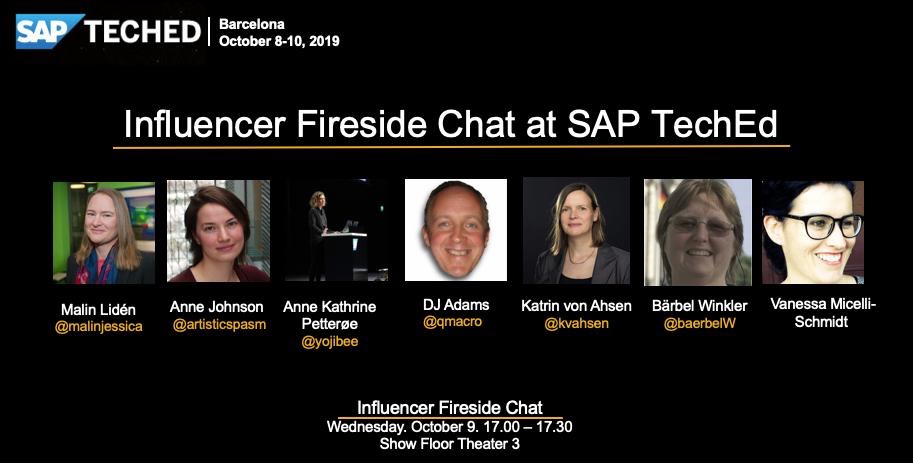 In case you are wondering why we had the chat an hour earlier than on Tuesday, the reason was the Celebration Night most attendees were eager to get ready for. We had enough time to go to our hotels from where shuttle busses would then take us to the event‘s location on Barcelona‘s beachfront and four bars serving different drinks and delicious finger food to munch on. Personally, I‘m not a big fan of this type of usually crowded and „too-loud-to-actually-talk-with-others“ events and almost didn‘t go but then decided to join it at least for a while. It had rained earlier in the evening but it was still warm outside when we got to the beachfront. I made my way along the boardwalk to the last bar in the row, the Shoko which wasn‘t yet too crowded and where I found some nice food to nibble on. While there, I had the chance to chat a bit with Gregor Wolf about our „interesting“ situation on our path to S/4HANA (thanks, much!) and my colleague Ilya showed up as well. As it was getting too loud inside the bar to hear oneself, Ilya and I sat outside at a table for a while and talked about this and that before I started to make my way back along the beachfront to the shuttle busses taking people back to their hotels at 10 o‘clock. Once back at the hotel, it was time to call it a day on another quite eventful day at TechEd in Barcelona! 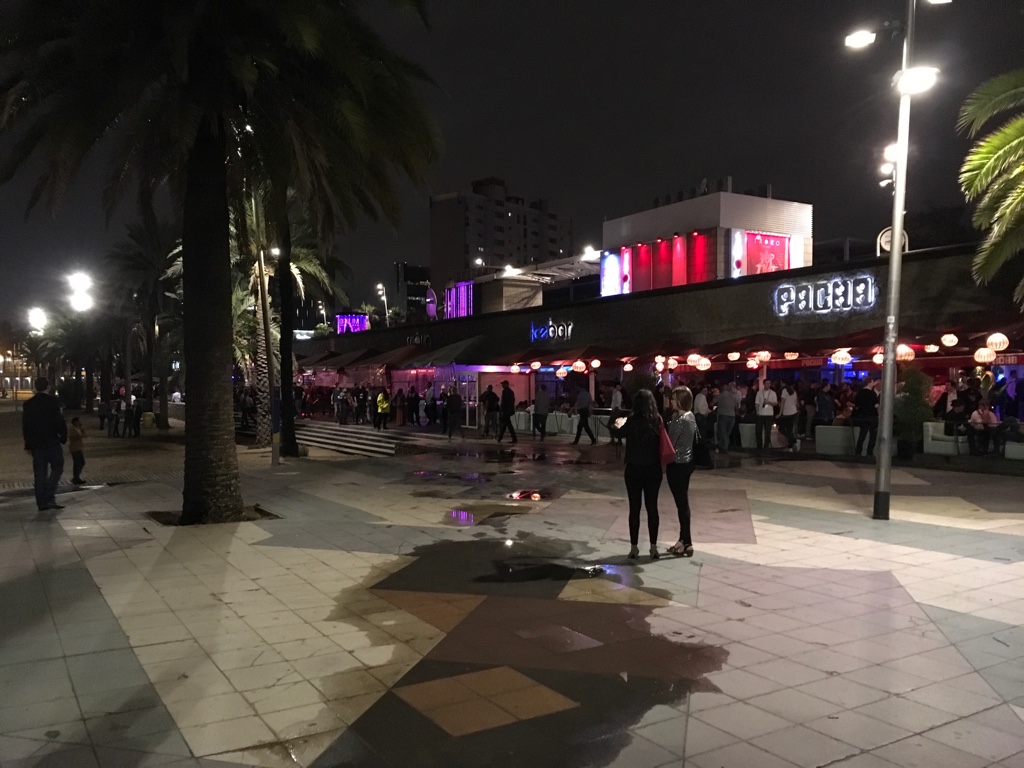 To read what happened next, please check Thursday’s post.