Before we go into the details of downtime optimization technique, it would be better if we first understand different implementation scenario that’s usually being encountered.

It’s been seen that people use update and upgrade interchangeably, but it’s crucial to understand the difference. In order to get more insight on why the target release EHP8 for ERP 6.0 is considered as upgrade not update, read the blog Why EHP 8 is different by Boris Rubarth.

Also out of the above listed scenarios, DMO and Conversion are the most time consuming ones as the entire procedure for this scenarios include several steps like migration, update and conversion (applicable only for last scenarios). So in order to help customer achieve minimum downtime, SAP has came up with different downtime optimization approach over the years. Following are the downtime optimization approach with their respective supported scenarios.

In order to provide more light on when to use above mentioned approach, you can check below graphical representation. It highlights which approach is applicable based on your scenario, like nZDM/ZDO approach is only available for update and upgrade and it is only available as Pilot Project

So now we got to know all scenarios and its respective downtime approach, we will now try to understand each downtime optimization approach in detail.

nZDM feature is generally available since SUM 1.0 SP07, where you enable this functionality in Configuration phase. Starting from SUM 2.0 SP02, nZDM is available for S/4HANA.

In older SUM release i.e. 2.0 SP05 or less, we can activate nZDM feature under Advanced configuration. But that has changed in SUM 2.0 SPS 06.

But in new Software Update Manager (SUM 2.0 SP 06) dialog sequence is changed and the above screens are modified. So from the mentioned SUM version, advance mode is retired, instead the tool offers the option downtime-optimized (based on near-Zero Downtime Maintenance (nZDM)) option directly on the main dialog screen when you select “No Migration” under database migration option.

The main benefit of nZDM is the significant reduction of the Business Downtime compared to previous update tools because more of the downtime-relevant update phases are executed while the system is still up and available for business users. The following deployment phases are executed in nZDM during uptime:

When it’s said that it uses “Record & Replay” technique it means that the database changes during uptime of the maintenance process create triggers, which records the changes. The recordings are only needed for tables which are used for the update / upgrade in the shadow. With the help of the recording the shadow tables will be updated after the upgrade/update phases in the uptime. The majority of the recording updates are run in the uptime. Only the delta (last 10%) has to run just before the switch in the downtime.

In order to get more insight on this feature, you can refer below blogs, wiki and SAP Note.

For more information on the new dialog sequence, you can below blog form Boris Rubarth

ZDO is already available since three and half year for SAP Business Suite and now from last year, SAP has extended this offerings to S/4HANA customers as pilot project. This optimization technique is available as project which need to be requested as per the instruction mentioned in below SAP Notes. So obviously this approach is not generally available

S/4HANA: 2707731 – Prerequisites and restrictions of Zero Downtime Option of SUM for SAP S/4HANA

In this blog, we will focus the ZDO approach with respect to S/4HANA System. So when we talk about S/4HANA System update/upgrade, there are three approaches that is being offered by Software Update Manager (SUM) – standard, nZDM and ZDO 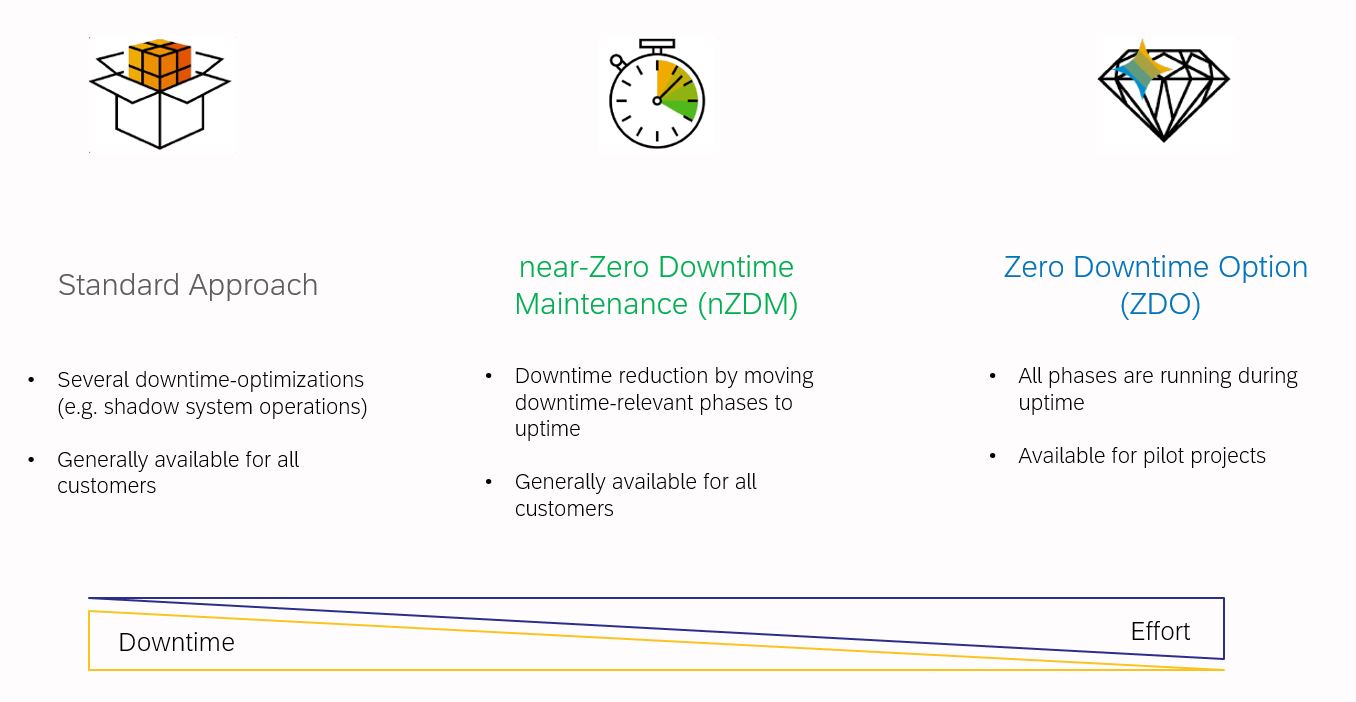 Above pictures describes that if business tries to optimize downtime, then there is more effort required in the project. This effort includes project planning effort, as well as testing effort which is higher in case of zero-downtime updates.

Both standard and nZDM approaches contain major improvements for minimizing the technical downtime and are generally available for all customers. But neither of the two can reduce the technical outage down to zero. In order to achieve that, SAP has introduced next level of downtime optimization: ZDO (Pilot Project)

In order to get holistic view on where ZDO approach stands, let us compare all the three approaches side by side.

In above figure, you can see that with ZDO, the technical downtime can be eliminated completely but it is replaced by “Uptime on Bridge”. SAP has introduced bridge terminology with ZDO, where part of your existing system will run in parallel to the upgrade instance where the maintenance event is triggered by the Software Update Manager. Usually, at a certain point of time, end-users will be logged-off from the system and the technical downtime starts. In case of ZDO, all users will be transferred to the so-called bridge sub-system. The good thing: the users don’t even realize this since the transition to bridge happens in the background.

Bridge is basically the clone of your system but the good part is that it does not clone entire schema instead it will just clone tables that will be touched by the update procedure. 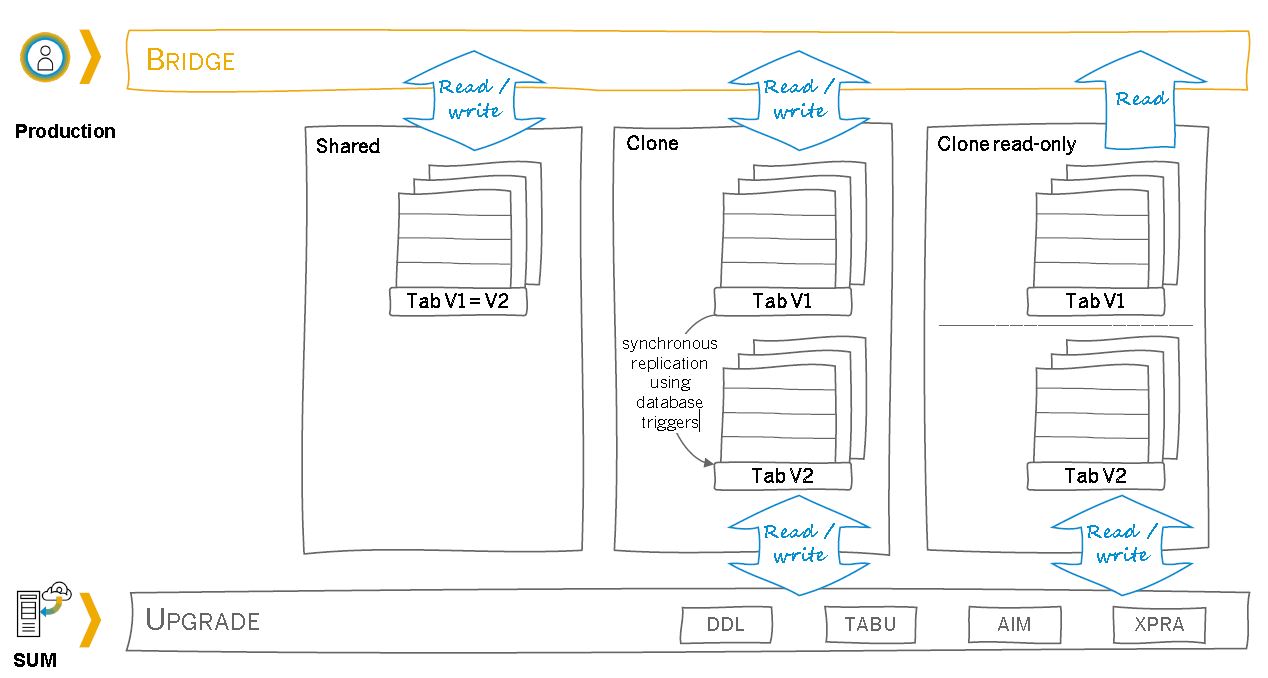 Let take a look on how it works. You have started SUM and now the procedure is running and it has created a bridge and all the users are now connected to the system via that bridge. If the upgrade procedure is not doing anything with the tables, then the tables are kept as it is. If this is the case, then that tables are shared which means the business user who are now connected via bridge can perform read/write in this table but the upgrade does not do anything to it.

But if the upgrade is doing things like structural changes in table i.e. it is adding one more field, then the procedure will create a clone of table (V1) with new version V2 which will have new structural change of target release. As user is reading or writing changes to table (V1), we have to make sure that it is replicated to target table V2, this is achieved by having synchronous replication using database triggers. So whenever changes happens to V1 it will be replicated to V2 and after completion of SUM procedure, table V2 will be our main table and table V1 will be deleted.

As we are using database trigger to replicate changes between two version of a table, there are cases where it is not possible to cover all changes like complex structural changes i.e. data type changes from integer to character. In such complex changes, we need to set that table to read only. Example if you have 100000 tables and out of that 1000 is set to read only. It sounds a lot, but most of the read only tables are customizing tables, but anyways during upgrade customization is locked. In order to understand what is the impact of read only table in our system, SAP has came up with SUM impact analysis tool.

In order to get insight on how SUM impact analysis tool works and how to analyze the result, I recommend to listen to SAP TechEd Session from Jens Figer – CNA306 – Get Your SAP S/4HANA Ready for Running a Zero-Downtime Update Project, 2018 Las Vegas. I recommend you to listen to this session.

In order to get more insight on this feature, you can refer below blogs and SAP Notes.

If you want to stay updated on the latest optimization approach, kindly follow Jens Fieger in SAP Community as he is the Product Manager for Downtime Optimization Technique

downtime-optimized DMO approach is basically used when you are migrating your database to HANA, so it can be used for Business Suite migration from AnyDB to HANA or S/4HANA Conversion from ECC (check below Notes & Limitation section).

downtime-optimized DMO approach was in pilot mode, but it is now generally available with SUM 2.0 SPS 06. 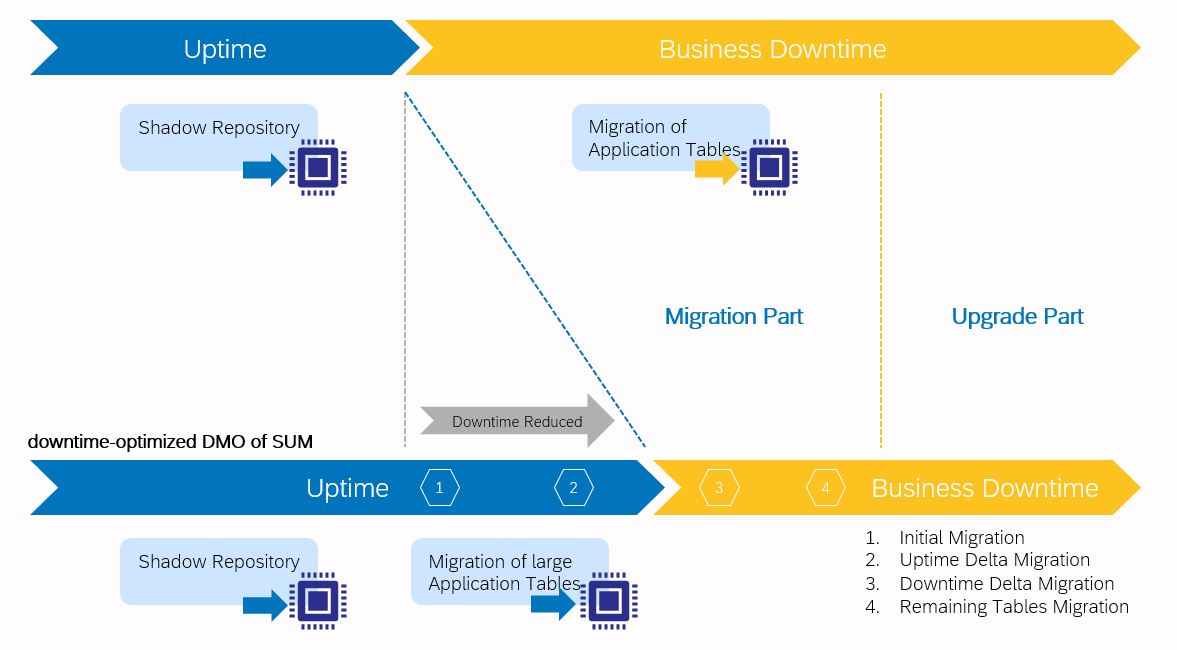 The technology behind this approach is to migrate large application tables during uptime processing of DMO, thereby reducing the migration time during downtime.

In order to get detail insight on how technology works, kindly read the blog – DMO: downtime optimization by migrating app tables during uptime by Boris Rubarth

Below are some of the useful SAP Notes

This approach is basically used when you want to convert your ECC 6.0 system to S/4HANA On Premise. As described earlier, downtime-optimized DMO approach is influenced by migrating large application tables during uptime, whereas downtime-optimized Conversion taking technical downtime optimization a step further by performing data conversion of the application tables from old to new data model.

downtime-optimized Conversion is currently available in pilot project, so you need to raise request with SAP as per below SAP Note

The idea behind this approach is to move downtime activities (like data conversion from old to new data model) and database migration (in case of source system on non-HANA database) to uptime processing of SUM.

In standard conversion, the FIN data migration has to be executed after the SUM has finished by respective IMG activities (e.g. FI customizing, FI data migration). The downtime-optimized approach will even move the FI data migration (partly) into the SUM uptime processing.

When you start SUM, in the entry screen it will ask for stack.xml (as show above) and if your xml contains a scenario where it is planning for a S/4HANA Conversion from ECC, it will ask you the scenario strategy in the next screen.

As the tool knows that you are planning for S/4HANA Conversion, it will provide you with three option where third option is only visible if you are doing S/4HANA Conversion. You can choose the second option “Downtime-optimized (based on downtime-optimized DMO)” which mean uptime migration of large tables, it is not the full blown downtime optimized conversion as this approach is not generally available yet.

Unlike all near-Zero downtime approach, nZDT is basically different from the rest as this is service based offering by SAP. The method of delivery for this approach is not via SUM instead it is a customer specific procedure that is technically a clone approach.

The nZDT is very flexible regarding planned downtime activities. Database upgrades or migrations, OS migrations or Unicode migrations can be done on the clone in parallel to SAP upgrades as well.

Below are some of the important SAP Note for nZDT

NOTE: As this is service offering by SAP, there is no technical details available for this approach.

For latest update on SL Toolset and Optimization technique, do follow –

first of all, thanks for summarizing the various downtime-optimization approaches offered by SAP. Also, thanks for referencing to my blogs about ZDO and Impact Analysis.
I went through the content and I may have some enhancements that you can take over into the blog post:

This years session about ZDO at SAP TechEd has been recorded. Feel free to link to the seesion "CAA301 - Leveraging Zero-Downtime Maintenance for SAP S/4HANA" here as well.

Can you let me know where I can find technical details for zdo on ecc with sum SP7...how is the bridge system built what about the conversion phases