For the TL;DR version of the whole series please click here.

After coming to Barcelona slightly delayed on Monday, I had to get up fairly early on Tuesday to get to the conference center in time for the Influencer breakfast the SAP Champions, SAP Mentors and SAP Technology Ambassadors had been invited to. It was nice to actually meet fellow Champions and other Influencers in real life who I had been in touch with online via SAP Community for some time.

Towards the end of the breakfast Katarina Fischer, Craig Cmehil and Thomas Grassl handed out our new SAP Champions polo-shirts which we changed into before leaving for hall 7 for Jürgen Müller‘s keynote starting at 9:00. In the (long) walkway connecting the buildings, the TechEd-Team had put up large posters with our pictures on them. Quite weird to basically „meet oneself“ that way! 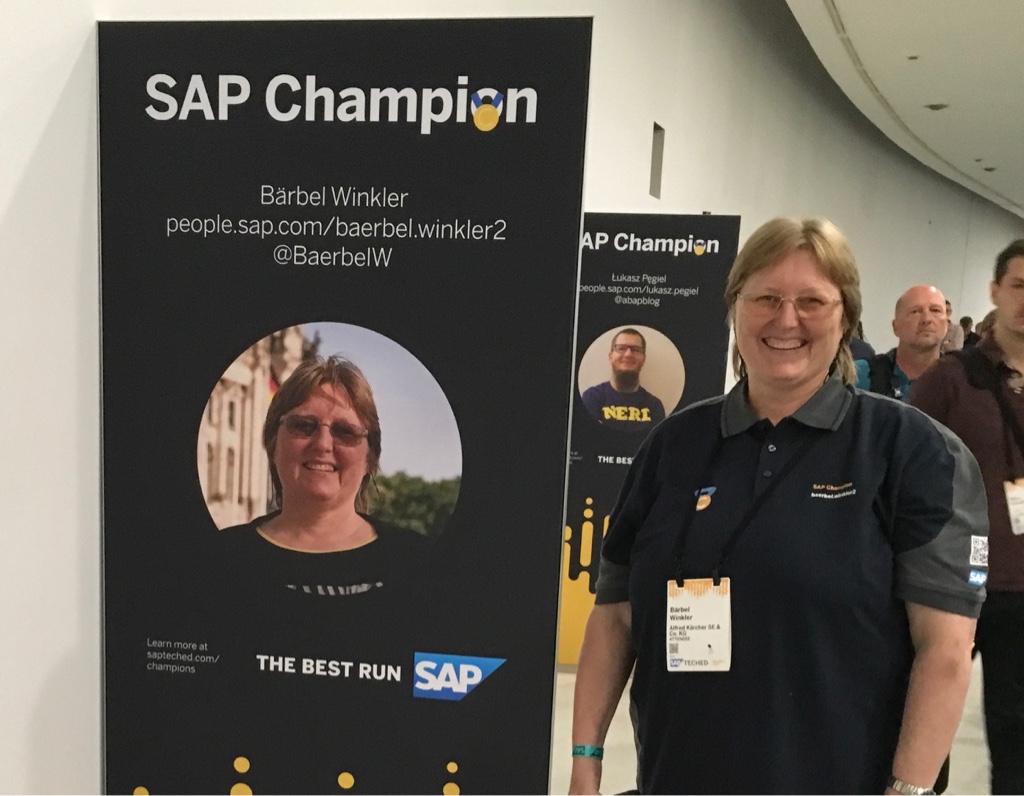 The hall where the Keynote was about to happen was pretty cool and draughty to begin with, so it came in handy to have heeded the advice to bring a sweater or jacket! While people were filing in to find good seats our influencer group had the luxury to have some reserved seating fairly close to the stage with an unobstructed view. As we waited for the keynote to begin, recent tweets were displayed on the main screen and the two screens to the left and right displayed a little slide-show, including this one, highlighting our group of SAP Champions, 14 of whom had actually made it to Barcelona: Jens Gleichmann , Andreas Gautsch , Anne Johnson , Kinga Moska , Jakob Flaman , David Ruiz Badia , Damir Majer , Łukasz Pęgiel , Roland Knipp , Tudor Riscutia , Johann Fößleitner (please let me know who I missed and I‘ll add their handles): 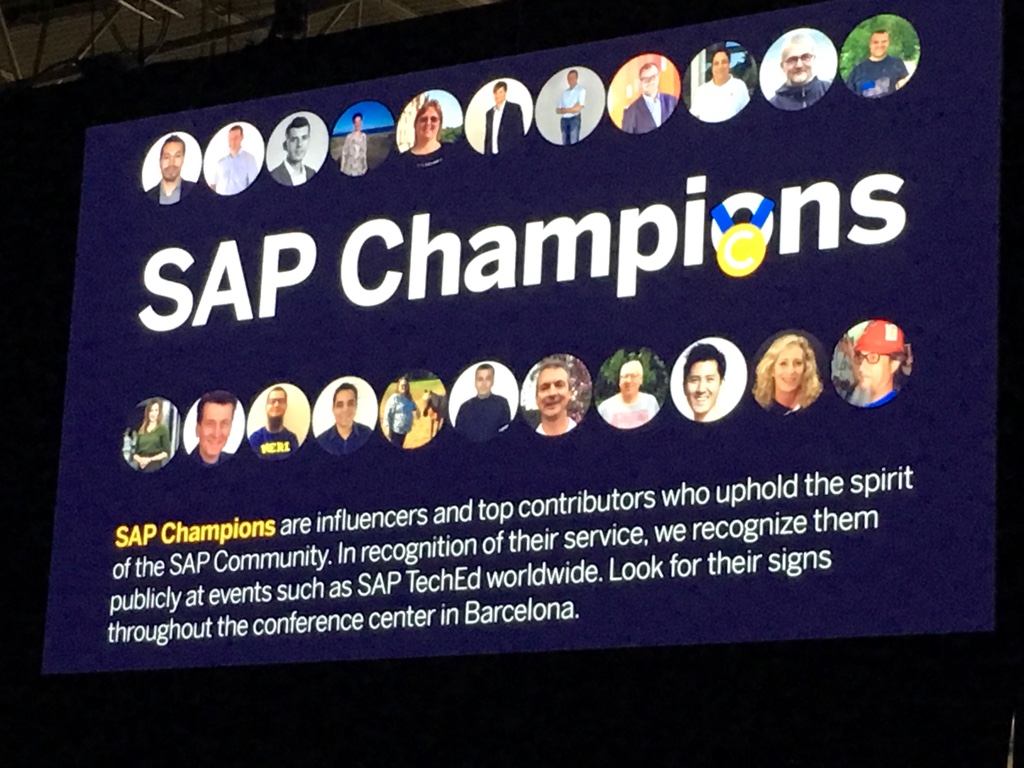 The keynote started with an – to me –  unexpected introduction by 17 year-old Bella Rae who told us about her development project to try and recognize signs of depression in children. She – the daughter of longtime SAP Mentor Chris Rae – created a prototype for such a program as a „moonshot project“ with SAP tools and it looks promising. But what was really surprising was the way she delivered the introduction: without flaw, with ease and no recognizable nervousness – quite the feat, standing up on a large stage in front of an audience of thousands of people! But, it‘s best if you just watch the recording of the keynote to actually see what I mean!

As I’m certain that there‘ll be other recaps of Jürgen Müller‘s keynote by people who can put all the things he talked about into much better perspective than I ever could, I‘ll leave it at that and move to sessions I attended and some other activities I was involved with in a moment. But first, here is a visualization of the keynote as it took shape on the showfloor over the TechEd days (h/t Wolfgang Irber): 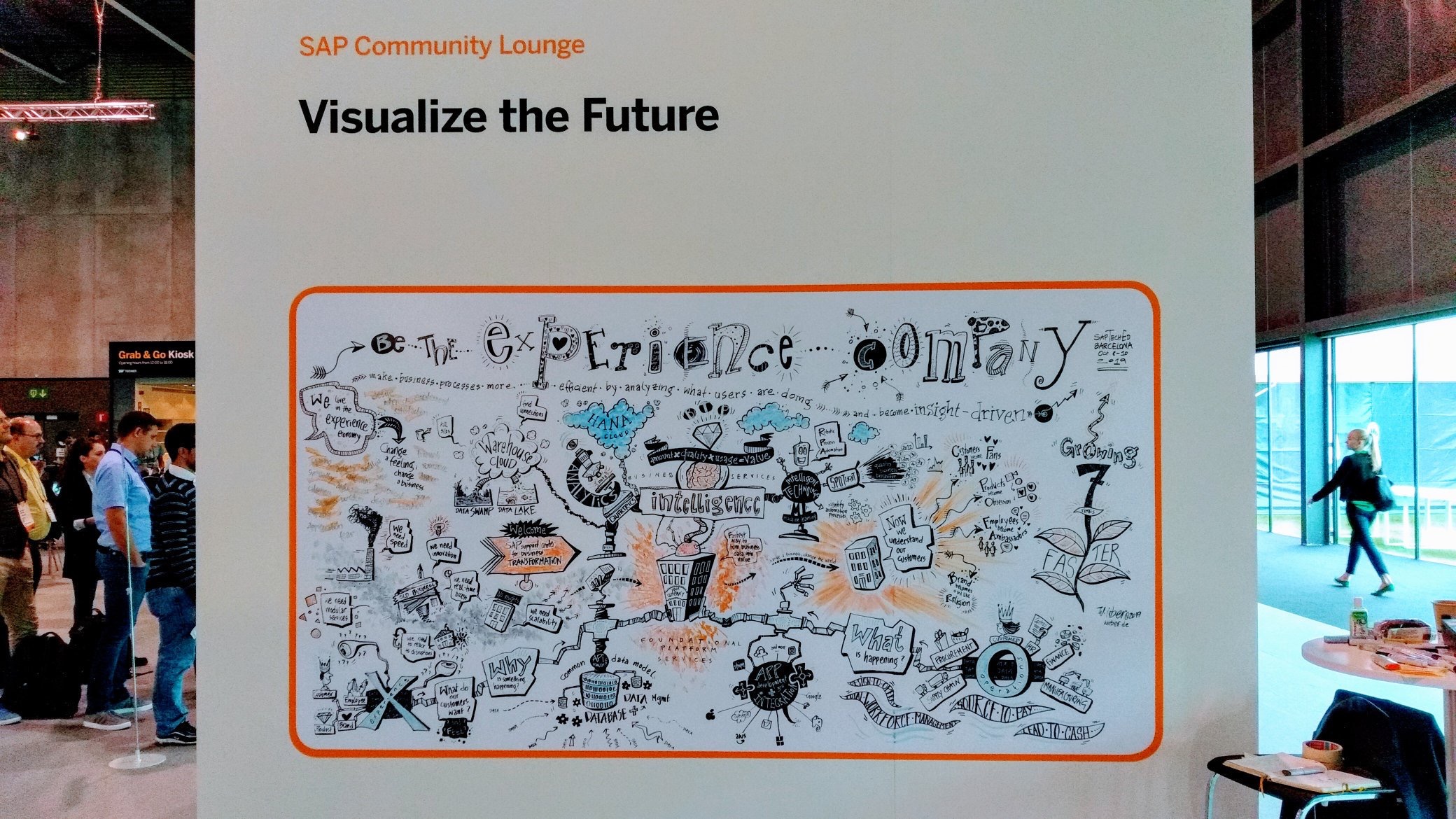 The first lecture for me was Boris Gebhardt‘s ABAP Strategy session (CAA100) in which he walked us through the various things already available depending on your platform and plans. One of his comments which stuck with me about planning for a move to S/4HANA was this one (from memory): „Not everything in your old cellar is needed in your new cellar if you move house“. This is a rather apt analogy for first „cleaning house“ by identifying unused ABAP-Code before really planning the updates needed to make any Z-code S/4HANA-ready. Important tools to do that are SCMON and SUSG. 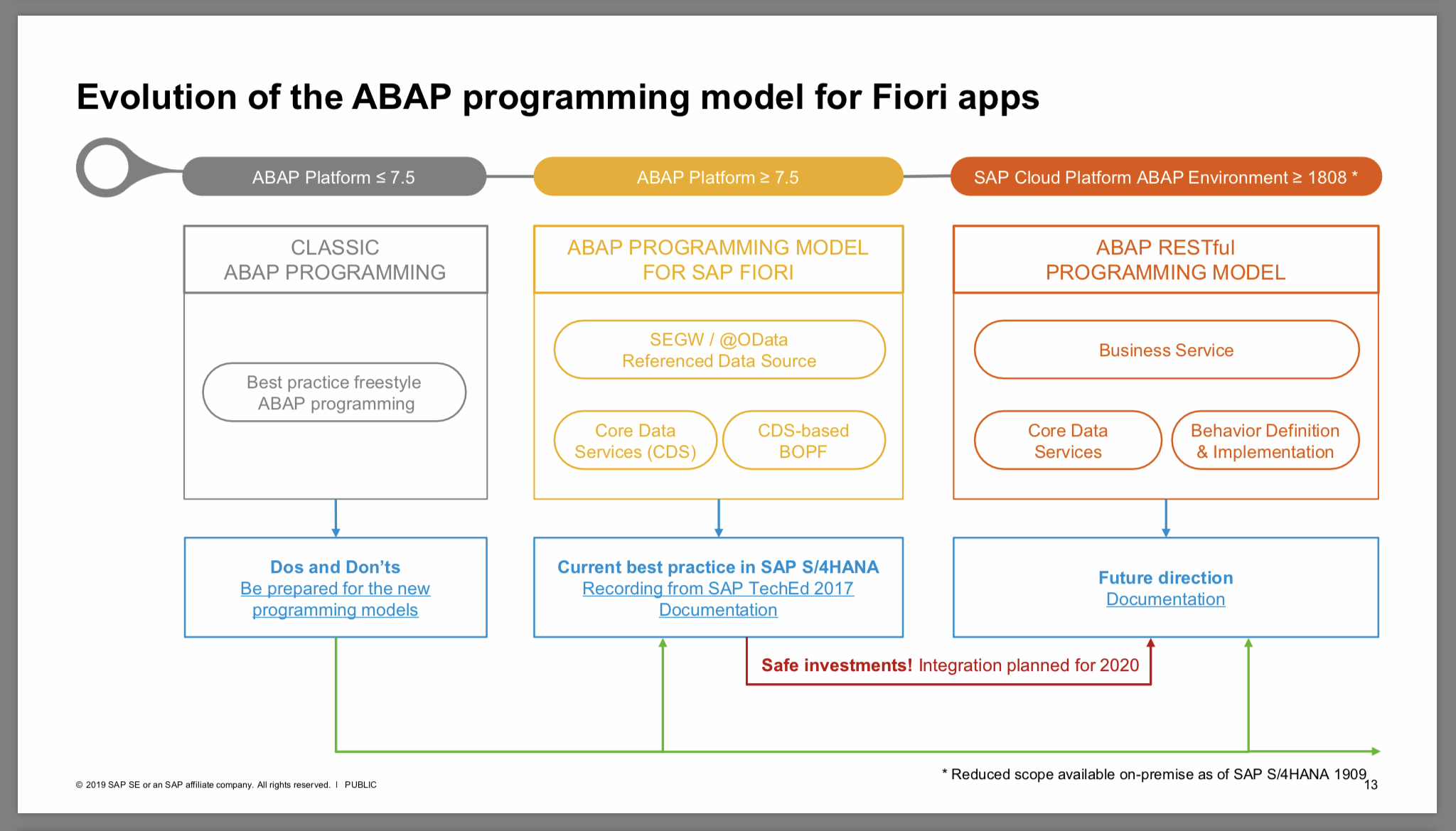 After nibbling on some food for lunch, I joined Marcel Hermanns‘ session about the ABAP RESTful programming model to get a big picture overview (CAA103). I have to admit that most of the things he talked about flew straight over my head as it‘s just rather far off from what I‘ve been actively involved with thus far. But, it still provided some helpful tidbits and I hope to overtime be better able to wrap my head around stuff like this. For now, I do have some doubts that it‘ll make „my life as a developer easier“! 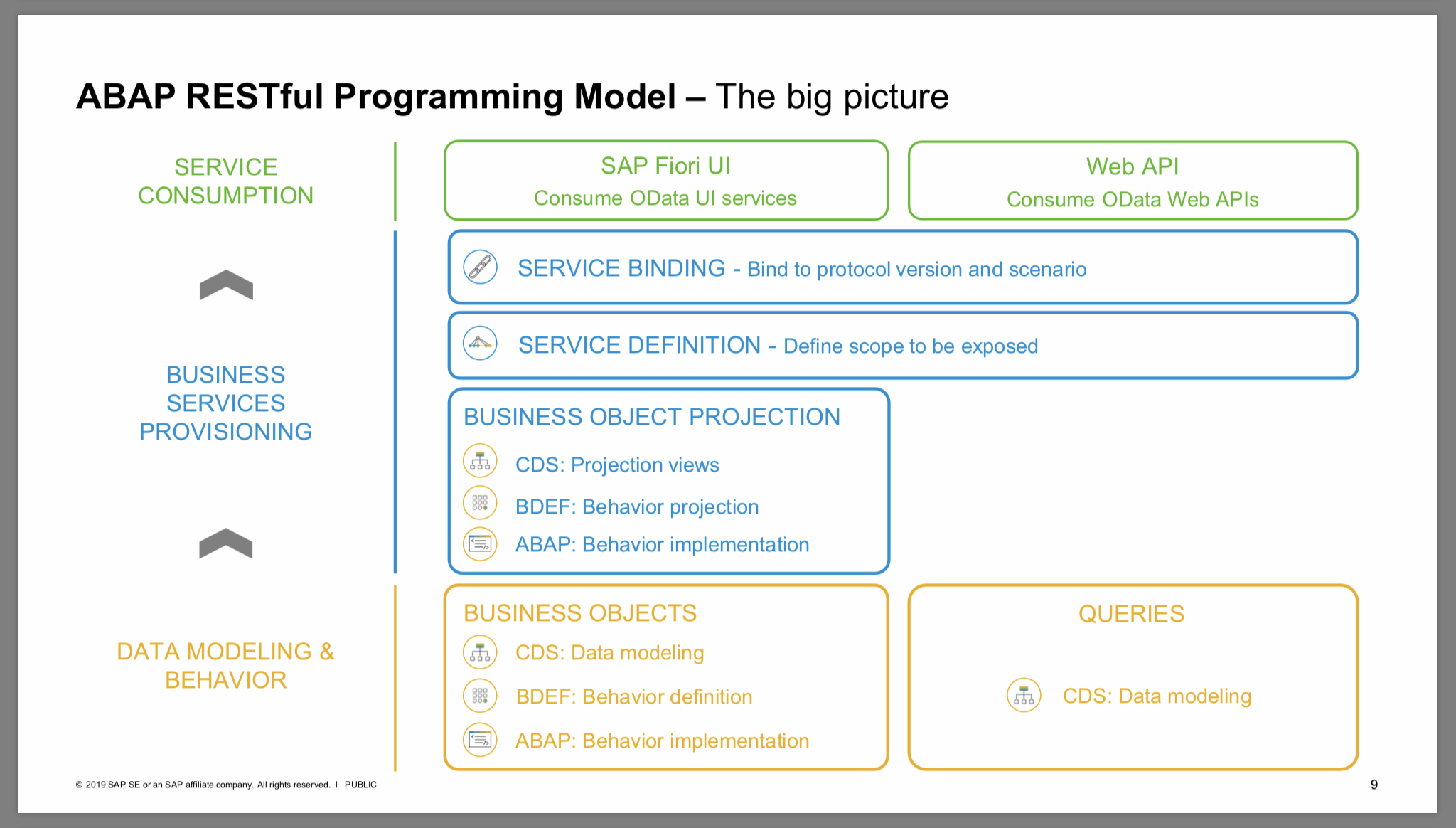 Next up for me was a session I could relate to a lot more: Custom Code adaptation for SAP S/4HANA presented by Olga Dolinskaja (CAA203). Reason being, that I had seen at least some of the material either online and/or in earlier presentations by Olga. Not to mention that I was already familiar with at least some aspects of the necessary steps, like using a central ABAP Testcockpit (ATC) system for custom code analysis as one of the prerequisites. Olga switched back-and-forth between her presentation and short live-demos of the different steps required, giving us a good overview and several helpful pointers and links to look at later. She finished with a neat to-do list: 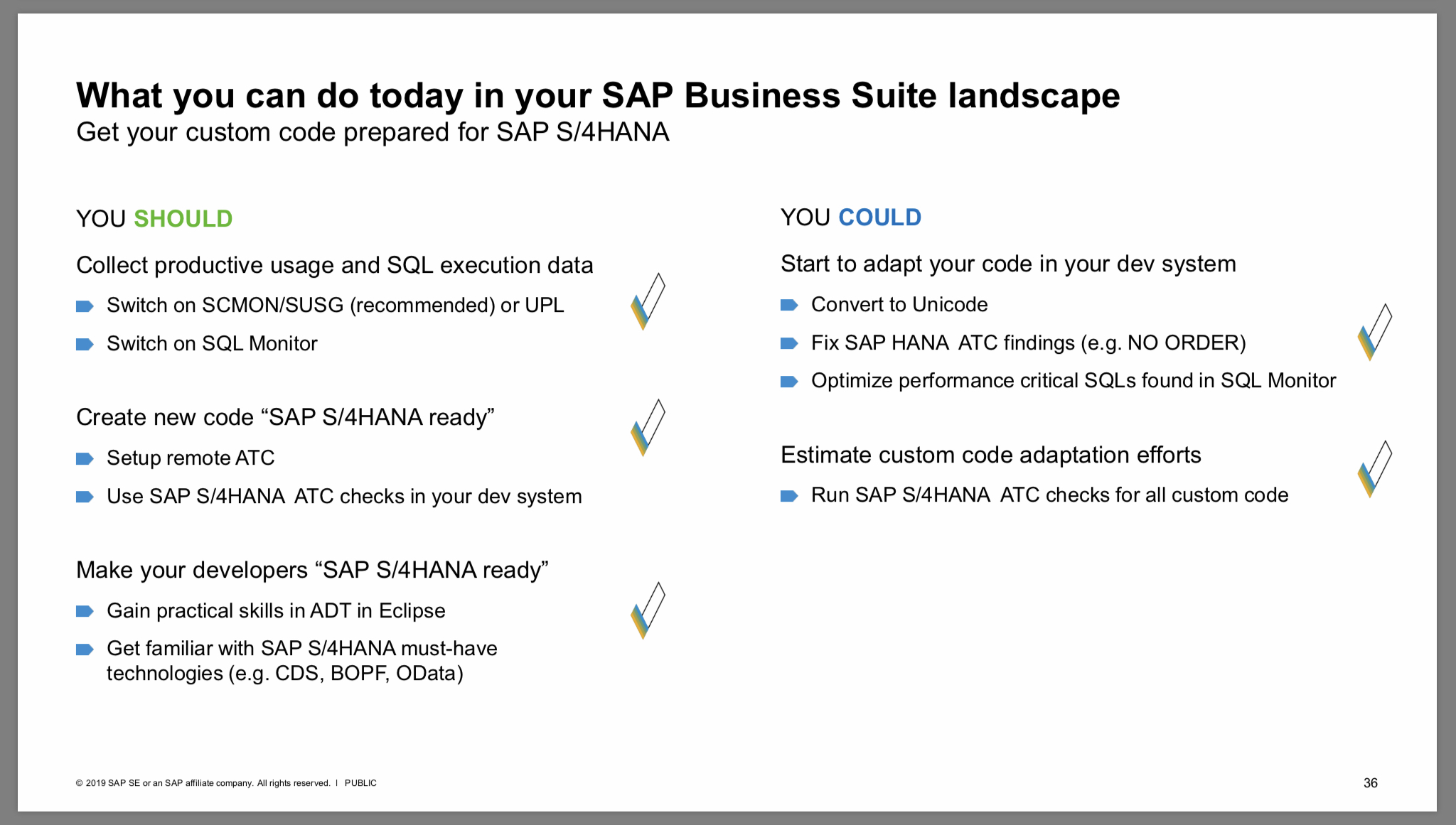 In the forth and last lecture of the day for me, Carlos Machado showed us how to optimize custom code for SAP HANA (CAA104) which is already available with NW 7.50 so something I could theoretically use or come across in our systems. Apart from using inline declarations and CDS-views – something I had already dabbled with a bit – he introduced constructs called „Common Table Expressions“ or CTEs for short. Here is how he explained what these are:

Looking at some sample code using CTEs I had „some“ doubts about the „simplify“ in that second bullet point for sure (but I hoped that the related hands-on session on Wednesday would help clarify things for me): 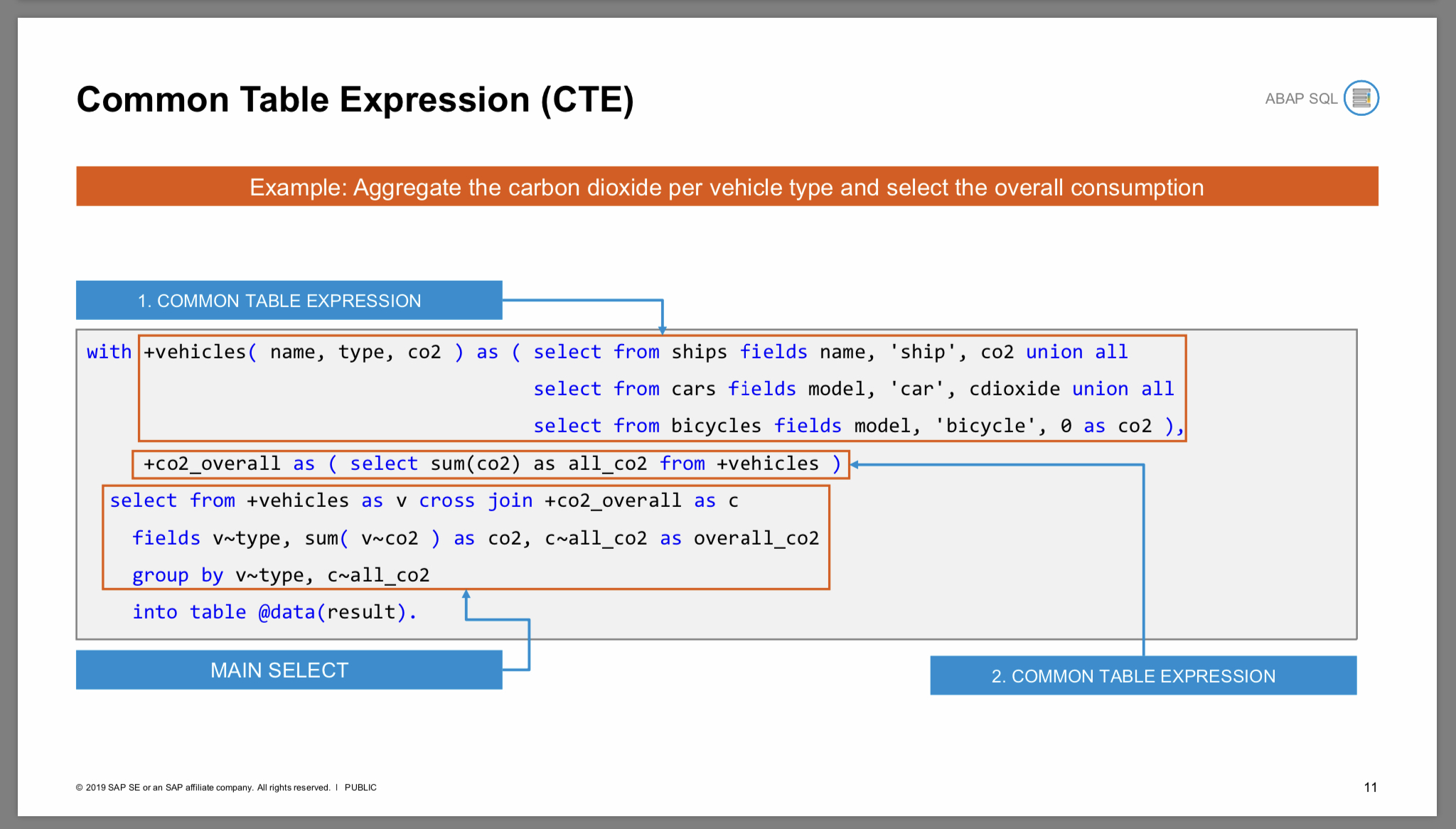 To wrap up the first TechEd day, I was one of six panelists in the day‘s „Fireside chat“ which Malin Liden had organized and approached us about beforehand. This was a „first“ for me and I had to leave my comfort zone as the session was getting recorded to be put up on the event‘s website. Anybody out there who actually likes to see and hear oneself in a recording? I‘m for sure not one of them! Anyway, back to the chat. It started with a short round of introductions and Malin then asked several questions mostly focused on Jürgen Müller‘s keynote speech and ended with each of us sharing a highlight or some impressions of the day. You can watch the session via this link to see how we did. 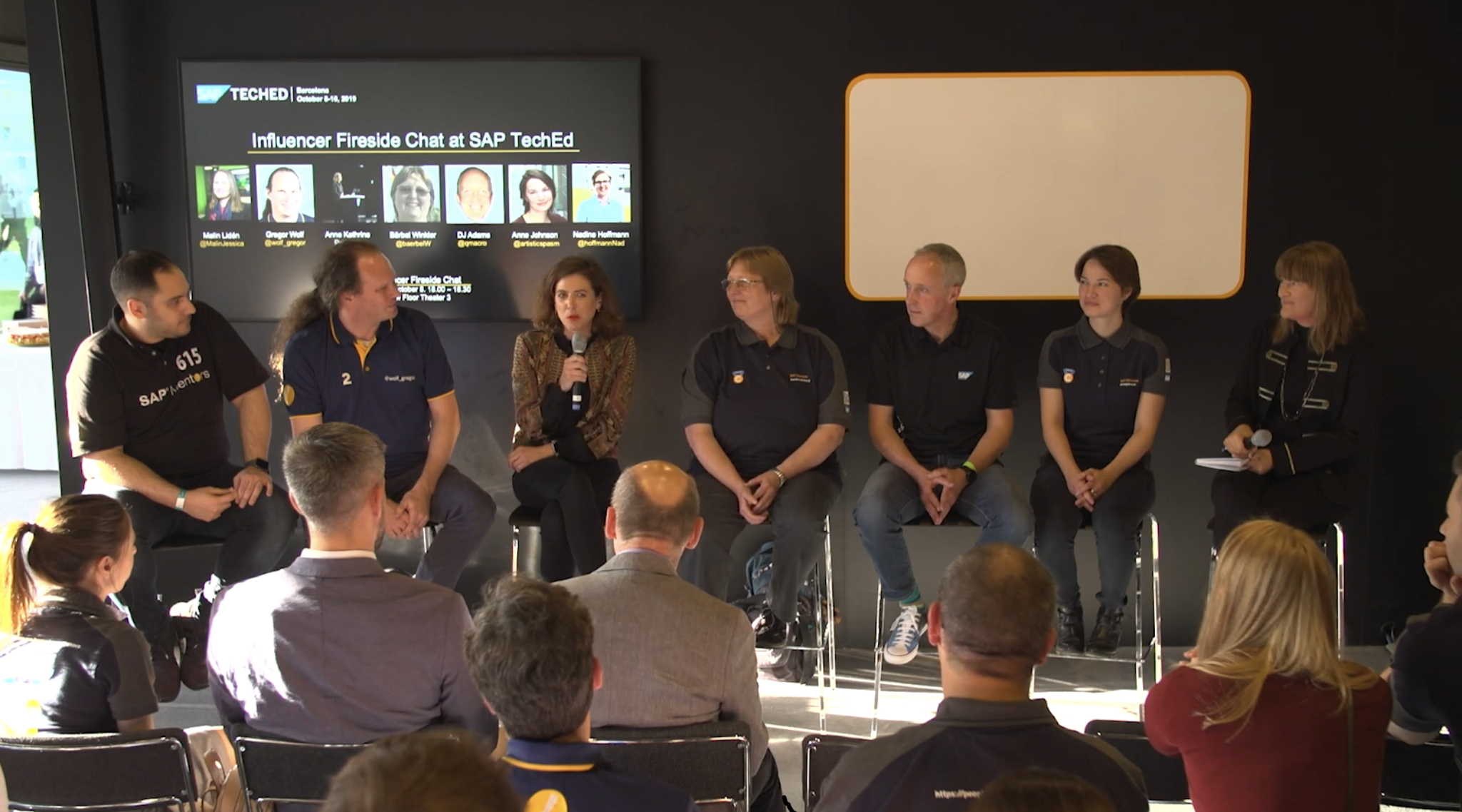 Shortly after the chat session was done and dusted, the Networking Reception got underway on the showfloor with drinks, snacks and fingerfood to chose from and many opportunities to chat with other attendees. The reception ended at 8:00pm and with that, it was a wrap for a long first and eventful day at SAP TechEd in Barcelona!

To read what happened next, please check Wednesday‘s and Thursday’s post. For the TL;DR version click here.

Thanks for the great write-up, Bärbel Winkler !  Being on a panel on a panel and being recorded is not really my favorite thing, but you were in good company, and it looks like you had a productive day.

I really wish I could have gone to Barcelona - to meet up with so many wonderful people.

And also to see Bella Rae in person.