Back to Barcelona — That A-Ha Moment (SAP TechEd Recap, Day 2)

OK, I admit I was a little cranky during yesterday’s recap, but I’m in much better spirits today.

True, many of my colleagues are at the celebration night, while I’m back at my room, writing this. But as I promised yesterday, I’m going to behave myself in Barcelona. Unlike my trip to Vegas. Or my last trip to Barcelona.

The #SAPCommunity team is the hottest thing at the ice bar. Come hang with us, #SAPTechEd! pic.twitter.com/KeYbfga5I1

I could go on, but you get the idea.

Plus, I have good reason to be in good spirits. Sure, the social-media team still thinks it’s too cool for me, but the “unconference” meetups — while admittedly slow yesterday — were going gangbusters today. See for yourself… 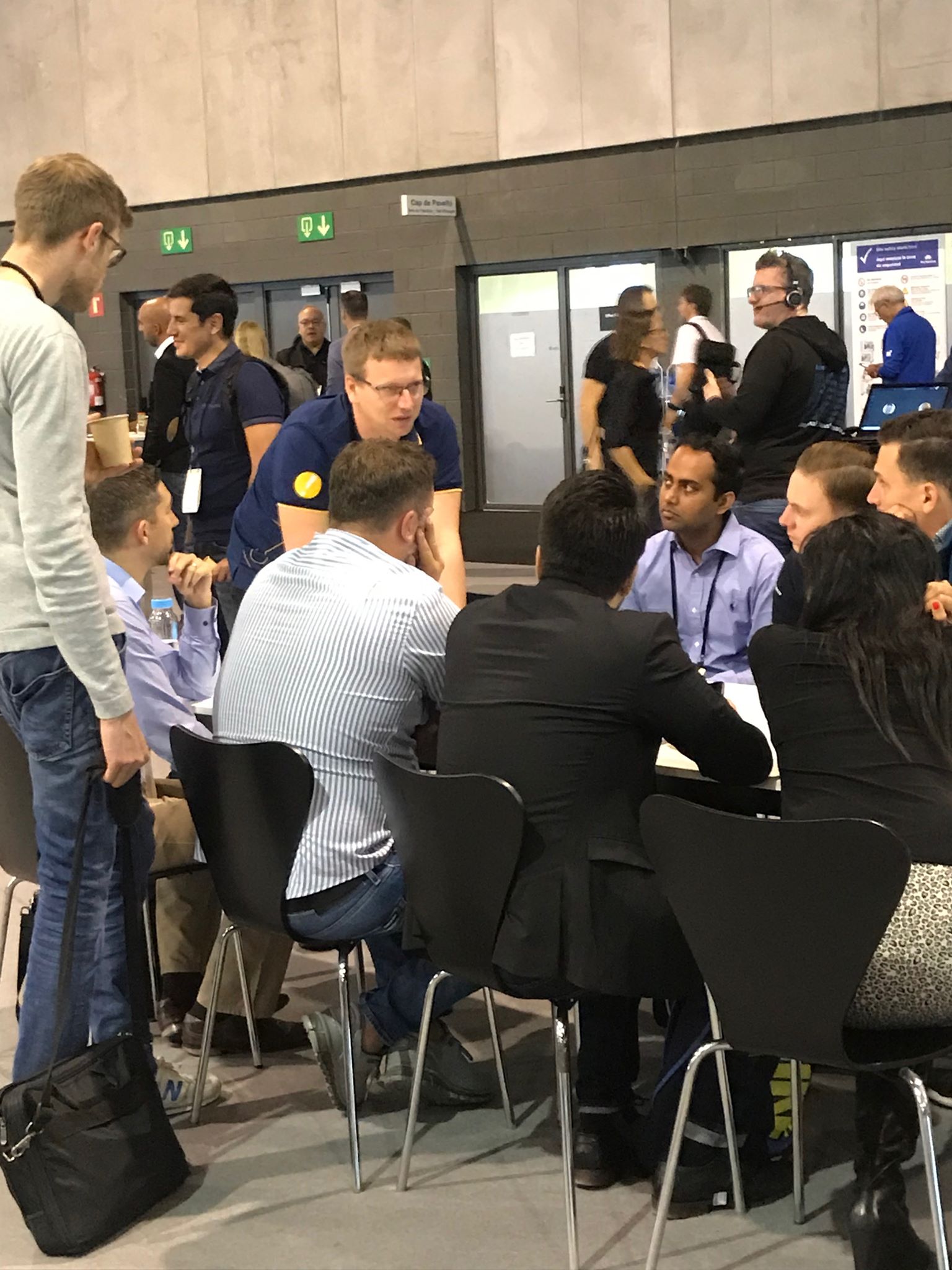 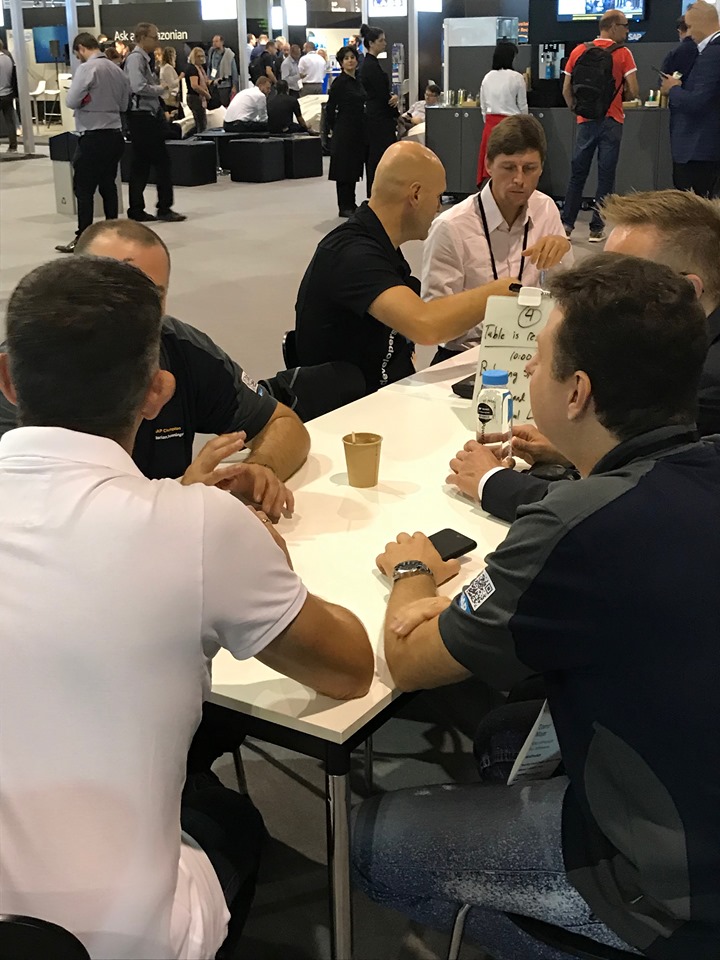 I could go on, but you get the idea.

I’d like to think that my post from yesterday — in which I expressed sadness over the turnout for the meetups — encouraged people to line up for sessions today, but more than likely, it was this video that helped…

And it wasn’t my award-winning performance either that drew attention in the video. Nope, Craig Cmehil stole the show — earning some payback by wandering into one of my videos (as I invaded his over and over in Vegas) to plug his meetup for tomorrow. And if you’re at SAP TechEd Barcelona, you definitely want to block out 10:00 a.m. for Craig’s meetup to discuss all things SAP Community.

Of course, Craig did ruin my one chance to shine in an SAP TechEd video, even as he shot a couple more to plug various activities throughout the Developer Garage/Community Lounge. (Hey, there can only be one leading man, and I know my face screams “character actor.” Or maybe my face causes people to scream. It’s a fine line.)

The other highlighted the App Center, SAP CodeJam (Mini-Editions), and Community Theater/Innovation Talks…

Craig tackled a lot in a little time, and even then he only touched upon a sampling of what’s going on here in Barcelona.

For example: Yesterday, I talked about the creative process for the mural artist, and today, attendee input began to inspire his art… 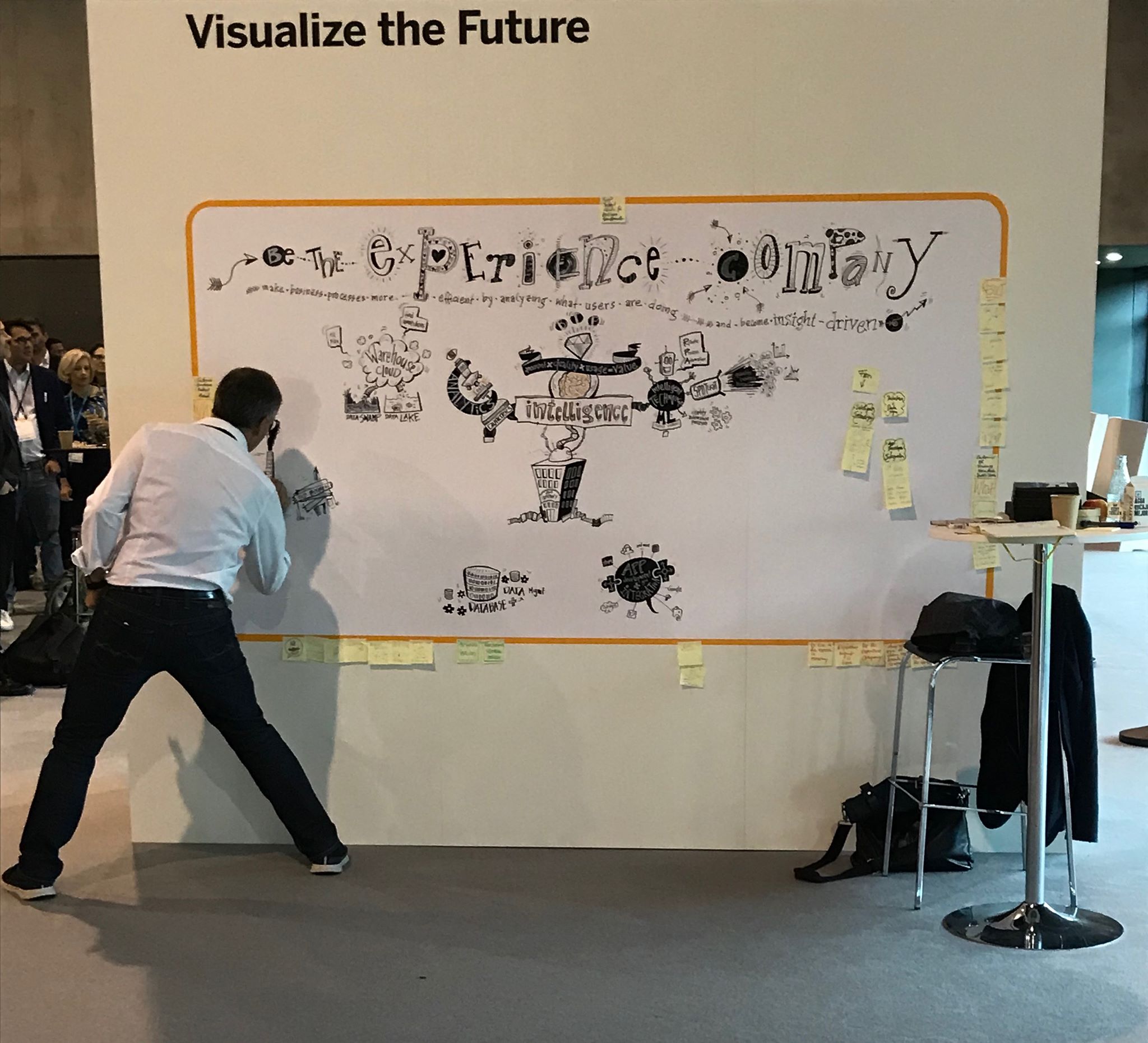 And speaking of inspiration…while sitting in on some of the meetup sessions, I decided I should hold my own unconference. I pondered and thought and bounced around ideas and in the end decided to dedicate an unconference to HANA S/4 ABAP in the Fiori Cloud based on…

Ah, who am I kidding? There’s only one thing I’m qualified to discuss, and it’s on Thursday’s unconference schedule for 3:00 p.m.

If that doesn’t inspire you, perhaps this will: By the end of day 2 in Barcelona, more than 1,900 tutorials had been completed! 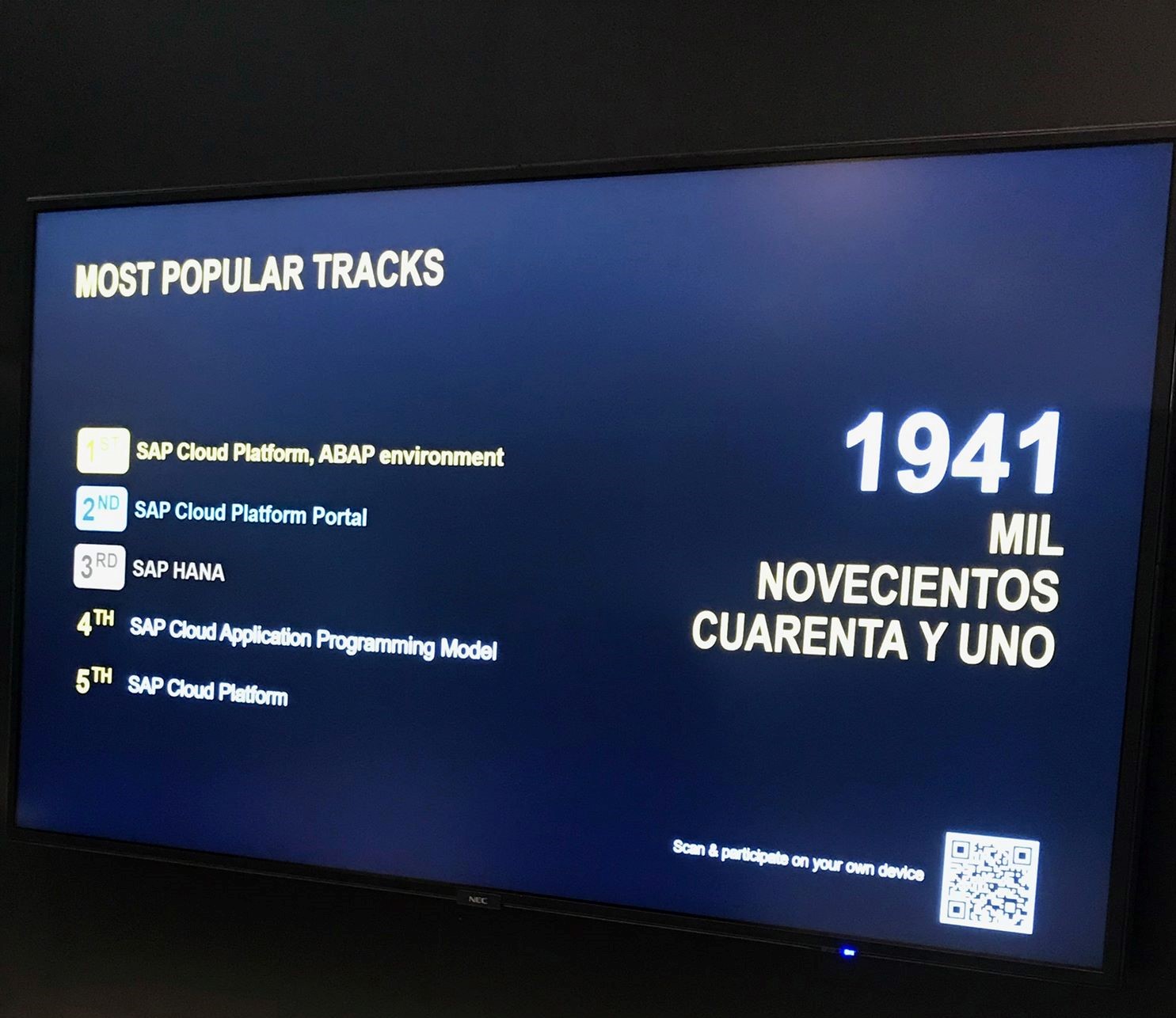 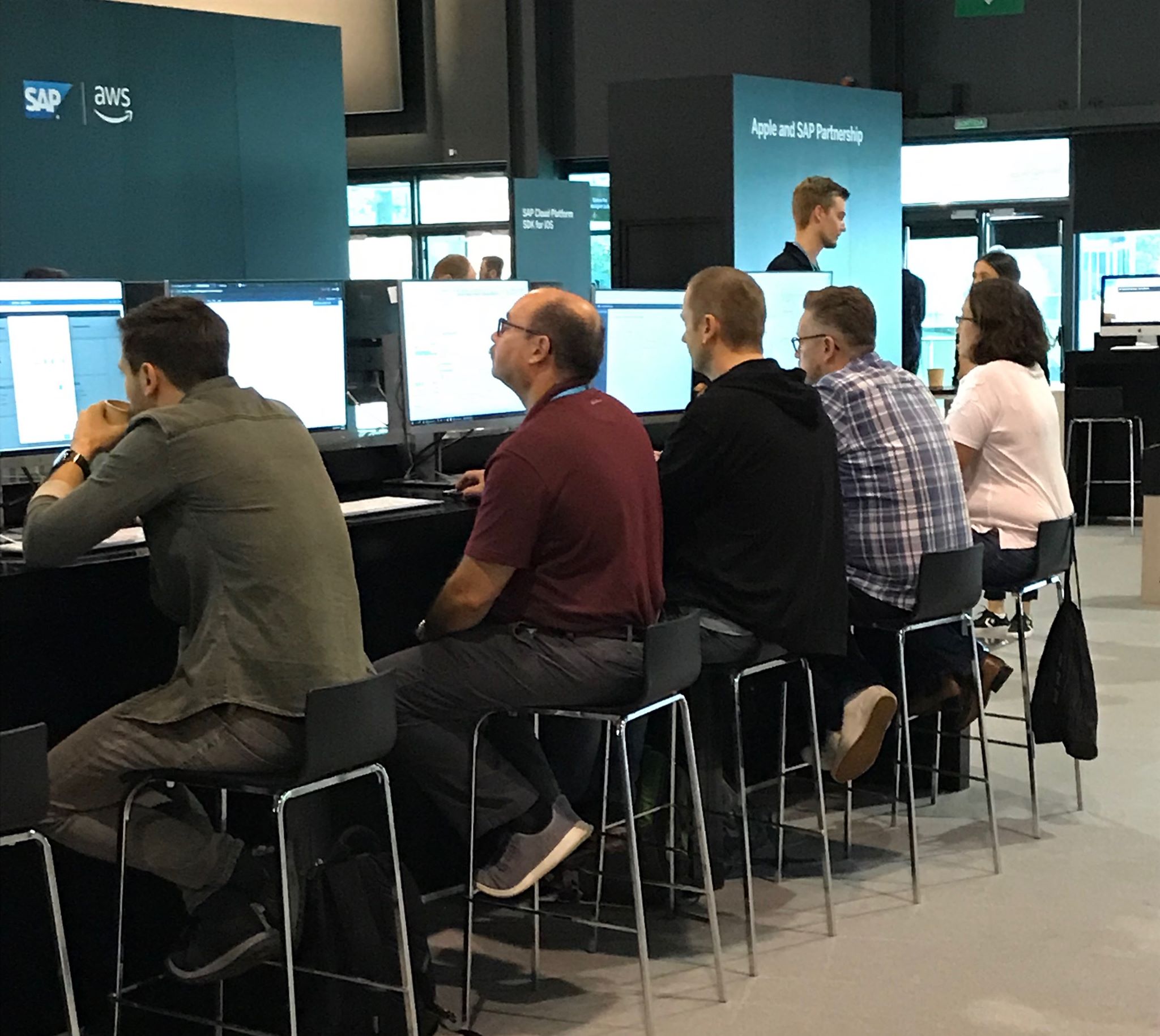 Let’s see if we can double that number tomorrow! And let’s see if we can’t completely book the meetup schedule. As one wise guy indicated when my back was turned (I won’t say his name, but it rhymes with…heck…what rhymes with Cmehil?), we still have lots of slots to fill. 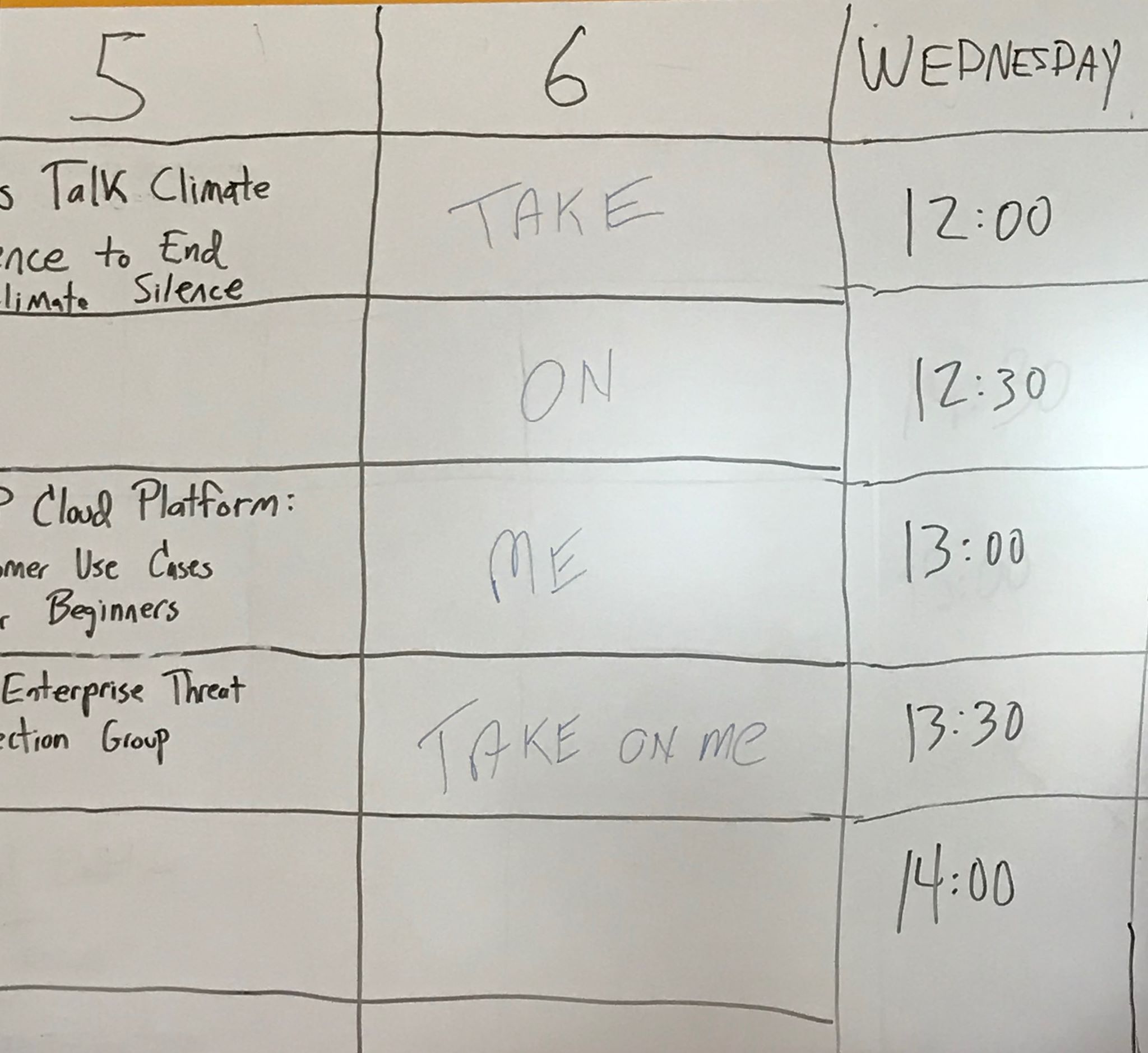 I mean…I know about being Rick Rolled, but is getting A-Ha’ed a thing?

So if you’re in Barcelona for SAP TechEd tomorrow, make sure to come by the Developer Garage and Community Lounge. Take part in the fun and educational activities. Complete tutorials and earn prizes. Schedule and attend meetup sessions.

If nothing else, take 30 minutes to attend my meetup at 3:00 p.m. and let’s talk about horror films. Help me get back in the Halloween spirit before returning to my family (below). And if you’re not in Barcelona, let’s talk scary movies in the comments! Thanks Jerry Janda for wrapping up SAP TechEd - it's really helpful for me this year as I didn't join. It looks that it were some interesting, busy and successful days! So, thanks a lot for sharing.

Thanks for reading the series! 🙂