Back to Barcelona — Sober Reflections of SAP TechEd (Day 1)

I’m back in Barcelona — and back with another series of SAP TechEd recaps, this time reflecting on the EMEA event.

If you followed my recaps from Las Vegas, you probably saw that maybe I hit Sin City a tad hard. As a change of pace, I’m going to pace myself a bit more in Barcelona. The result should be a somewhat more sober (in every definition of the word) — albeit no less entertaining (I hope) — account of this week’s activities in the Developer Garage and Community Lounge.

My nighttime festivities won’t be the only thing changing with this event. In Las Vegas, I worked on social media and other forms of communications. Here, I’ll be working the “unconference” meetup desk.

I arrived early Monday to scope out my work area…and discovered that it had been labeled “conference guidance,” instead of “content guidance.” 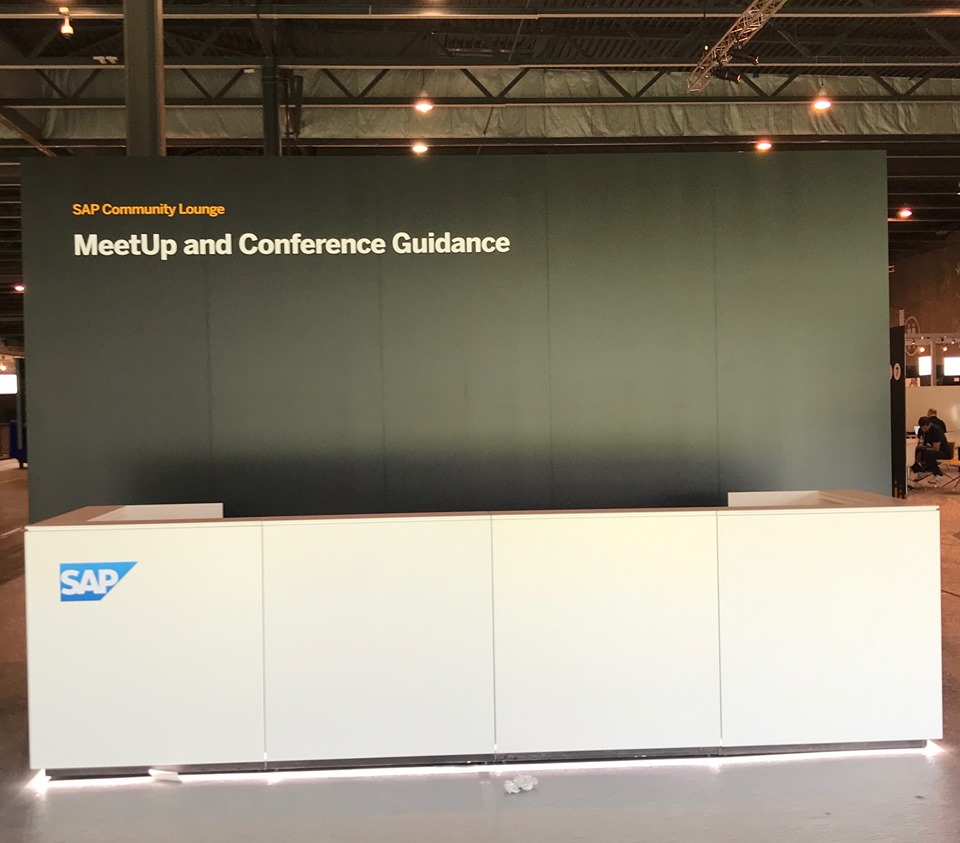 What’s the difference? Well, with “content guidance,” the idea is that people can stop by the desk so we can help them set up (or find) meetups that will get them the content/info that they require. May not seem like a big deal…until you realize that we’re situated right at a major entrance/exit, and “conference guidance” sounds an awful lot like a help desk. So right away I predicted that most of the crowds wouldn’t come up to me to discuss meetups. Instead, they’d probably want directions to the restrooms. 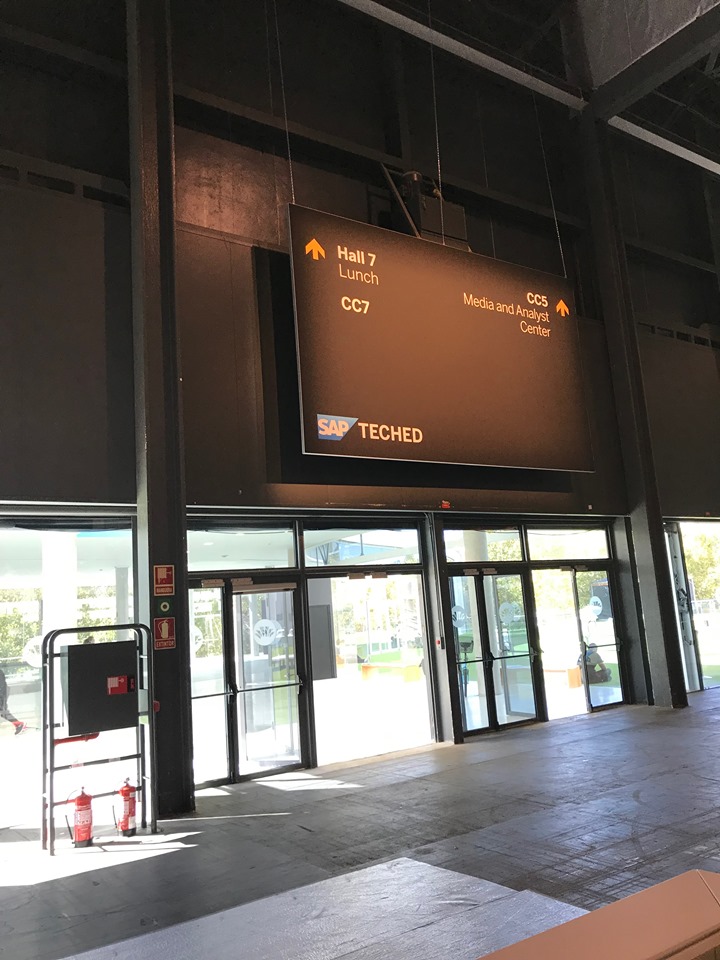 I’ve got a bad feeling about this…

Fortunately, when I arrived before the show opened on Tuesday, I discovered that the magical event fairies had been busy overnight — correcting the name of the booth and adding a sweet whiteboard where we could write down all of the meetups scheduled for the day. 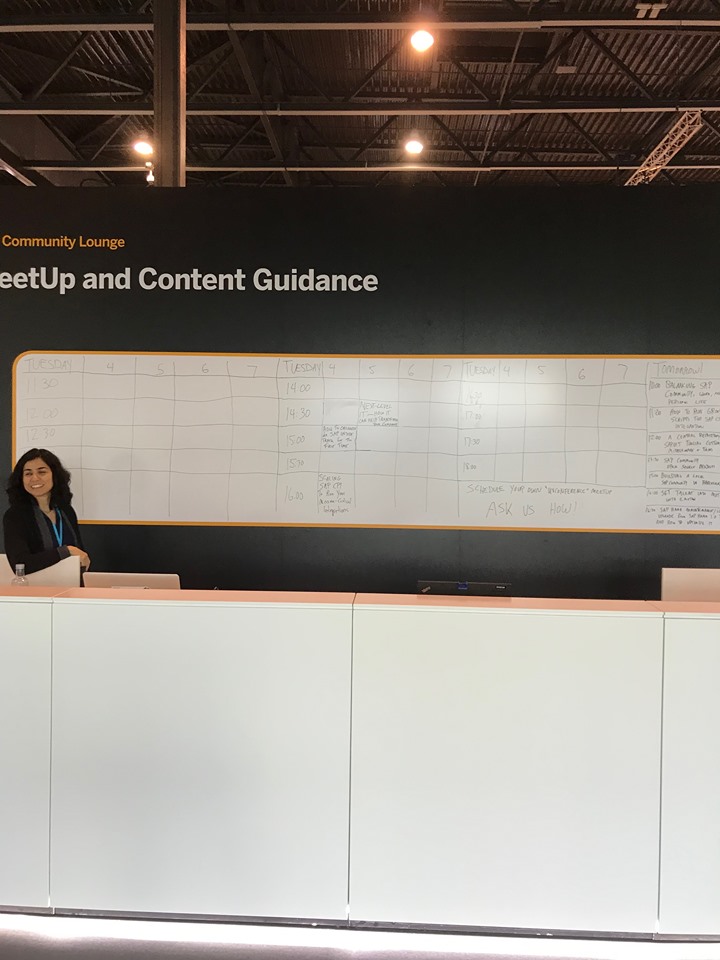 Corrected sign. BTW, my colleague Claudia Pacheco is working at the booth too. Fun fact: Her penmanship is waaaaay nicer than mine. So if you can’t read the board, that’s on me.

Of course, that didn’t stop people from walking up to our desk and asking all kinds of questions. Some highlights:

“Coffee?” (The answer: around the corner from our booth.)

And my personal favorite: “Is there a hairdresser on the show floor?” (The answer…well, how can you answer that?)

Oh, and I did get one request for restroom directions — from a very polite British gentlemen who asked, “Sorry for the random question, but can you point me to the closest gents?” (I do wish my Philly crassness allowed me to achieve British classiness on occasion.)

I’m not complaining, because the location does have its perks. For one thing, as you can see from the one pic, we are situated right near the outside — so we get plenty of sunshine (something sorely missed locked away for days in Vegas). The downside…it’s where everyone goes to smoke, and the ashtray is right by the door, which is often left propped open, allowing the smoke to blow in my direction. So while I somehow managed to escape Vegas without reeking of cigarettes (no easy task, since you have to stroll through a smoke-filled casino to get to the convention floor), I stink of tobacco as I type this. I mean…did nobody get the memo that I’m trying to behave myself this week? It’s gonna be hard if I’m gonna get a contact nicotine buzz just by standing at my booth. 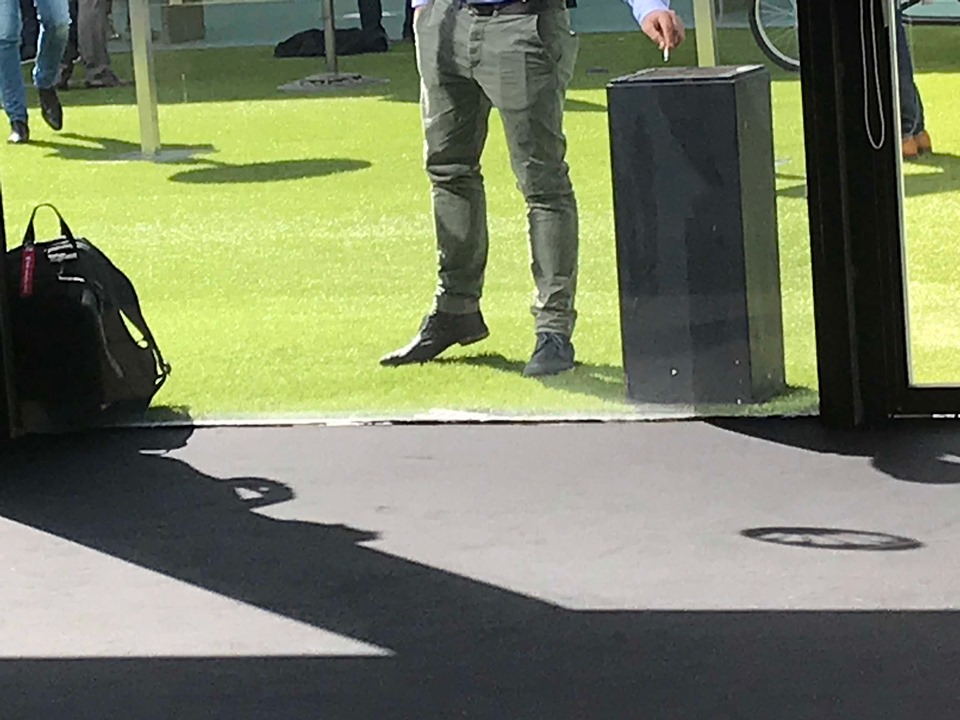 OK, maybe I am complaining.

Sorry, I think I may be grumpy from watching my colleagues on the social-media side meet interesting people and shoot videos — the fun stuff I was doing in Vegas.

I mean…doesn’t it look like they’re having a grand time without me? 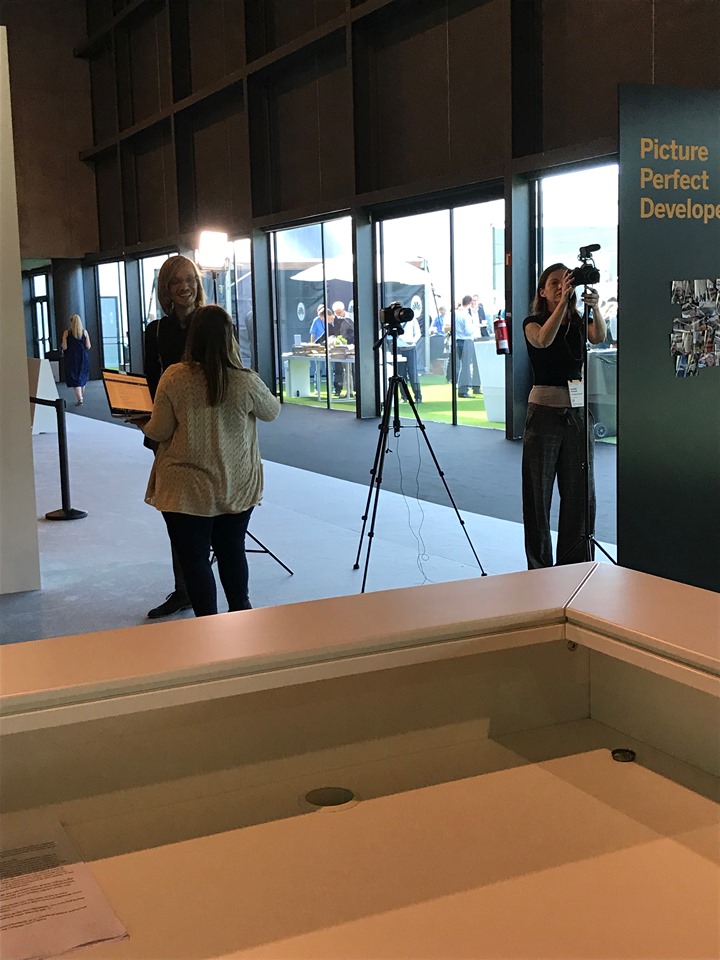 “Isn’t this so wonderful? Don’t turn around and look at Jerry. He’s so boring.”

In that photo, they’re setting up a video interview with Mark Wagener, one of the winners of the SAP TechEd scholarship conference. Here’s a taste of what they shot…

Great stuff, right? Meanwhile, at my desk, I couldn’t book out all of the meetup slots today. Granted, I got more than a dozen lined up for tomorrow — and that number is growing — but still…a guy can’t help but feel a little rejected. 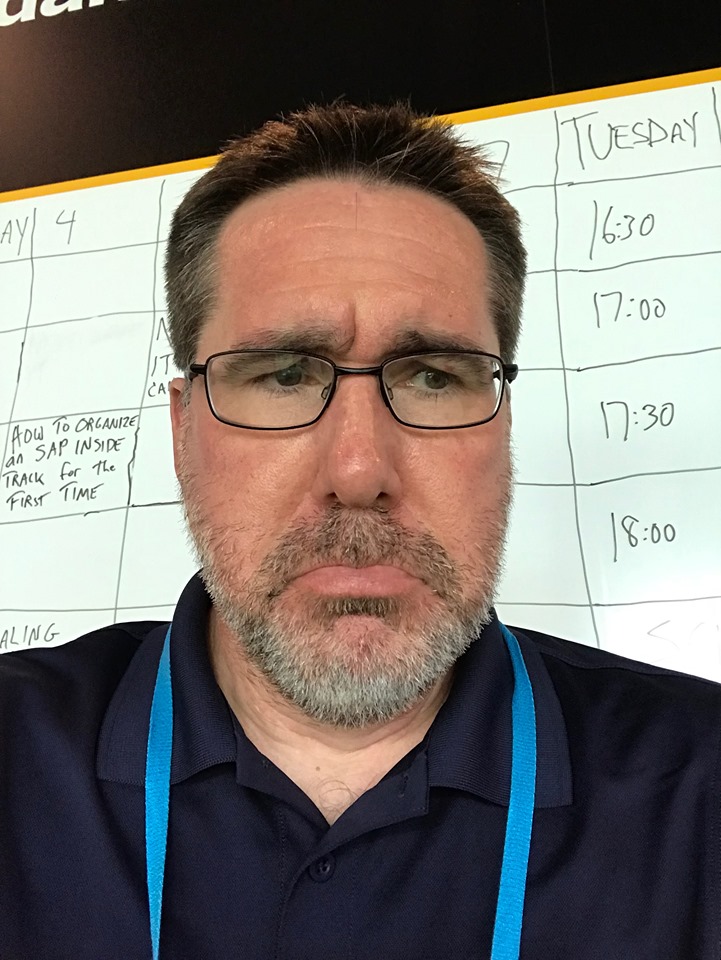 Why didn’t more people sign up? I’m a sad Janda.

Here’s Craig’s preview video from this morning (with my thanks for mentioning the meetups).

And here’s his recap video from the end of the day (again, my thanks for showing some love for the unconferences).

Wow, that is such a cool video. I love how that camera circles at speed around the booths. Not that I was involved with the shoot. But whatever. I’m not bitter.

Craig covers a lot of awesome stuff in his videos, so let me take a moment to add a few other tidbits that he didn’t get a chance to talk about.

Once again, we have a mural artist at the event, and he used most of today gathering ideas from attendees — which he’ll incorporate into a huge illustration that he’ll begin tomorrow. 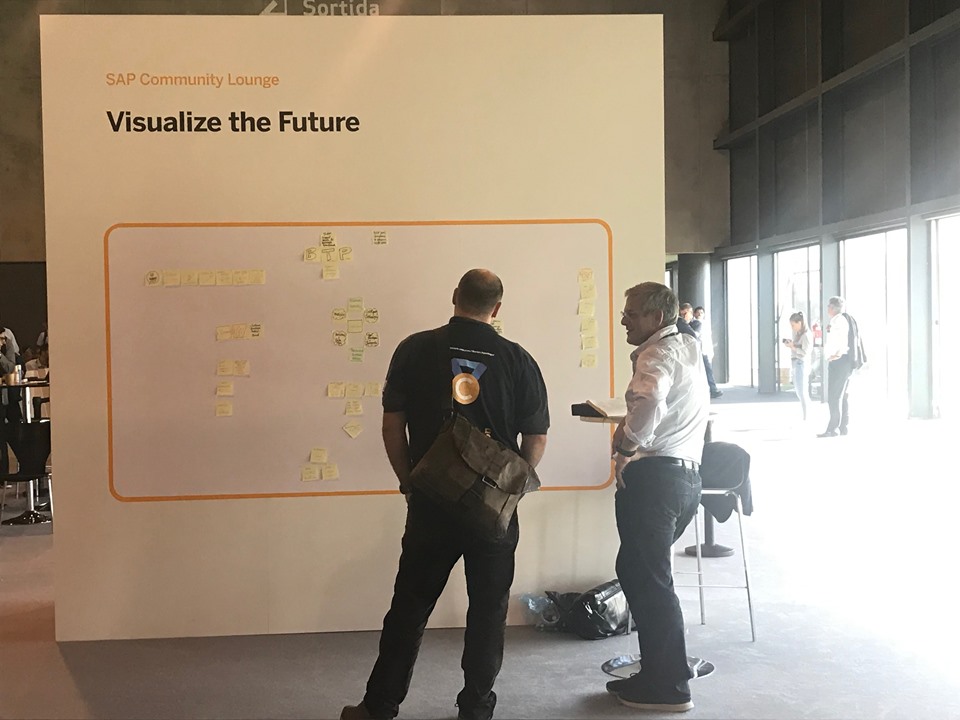 Uh, no, it’s not finished. The Post-it notes are not part of the piece. They’re just for jotting down input… 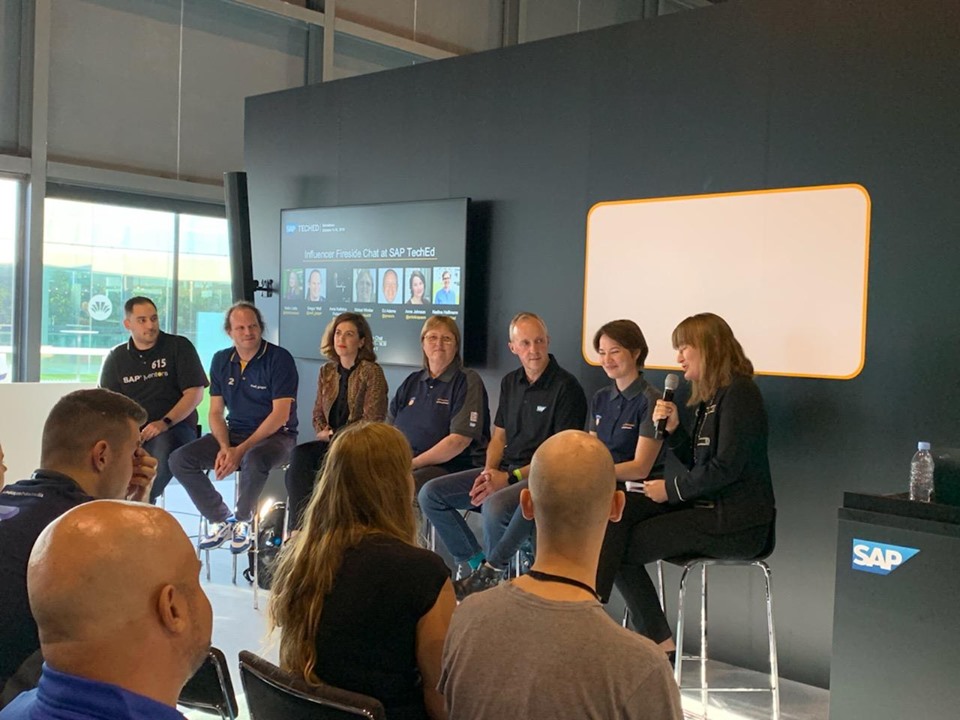 This nice shot of the Influencer Fireside Chat in the Community Theater reminds me I haven’t plugged the influencer finder recently.

And perhaps coolest of all — nearly 1,000 tutorials were completed in the App Space! 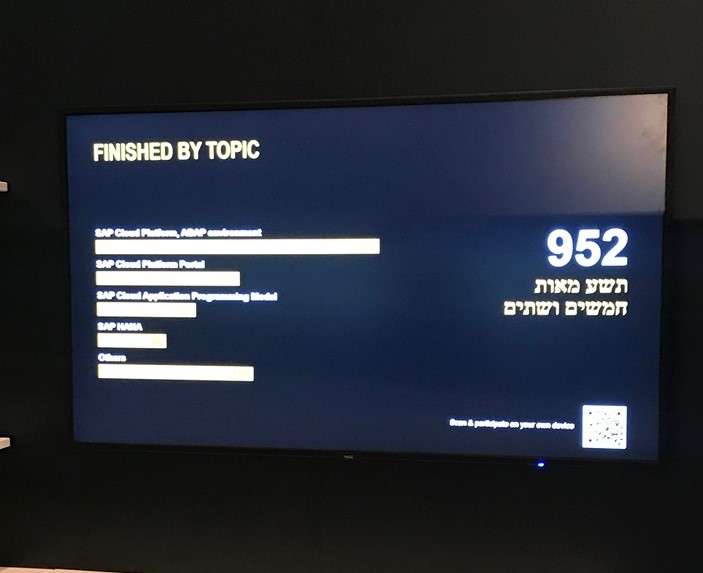 I predicted (incorrectly) that 3,000 tutorials would be completed in Las Vegas. C’mon, Barcelona, we can hit that number. Don’t let me down! And let’s do 100 meetups too!

Oh, and by the end of the day, the meetup calendar was filling up nicely. 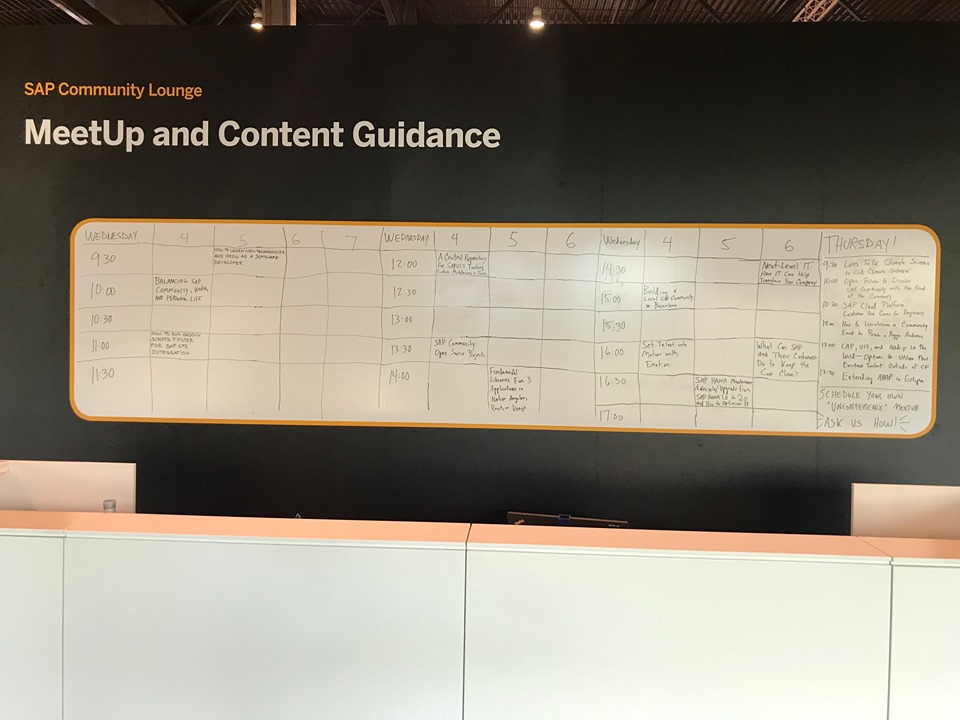 Since snapping this pic, I have had a few more proposals come in. Bad penmanship or not, I won’t stop until every box is full! Take that, social media!

More tomorrow! If you’re in Barcelona, please stop by the Community Lounge and Developer Garage. We have lots of fantastic stuff going on (yes, including the unconference meetups — which I encourage you to sign up for and/or attend!). And if you’re not, I’ll have another recap coming after day 2. 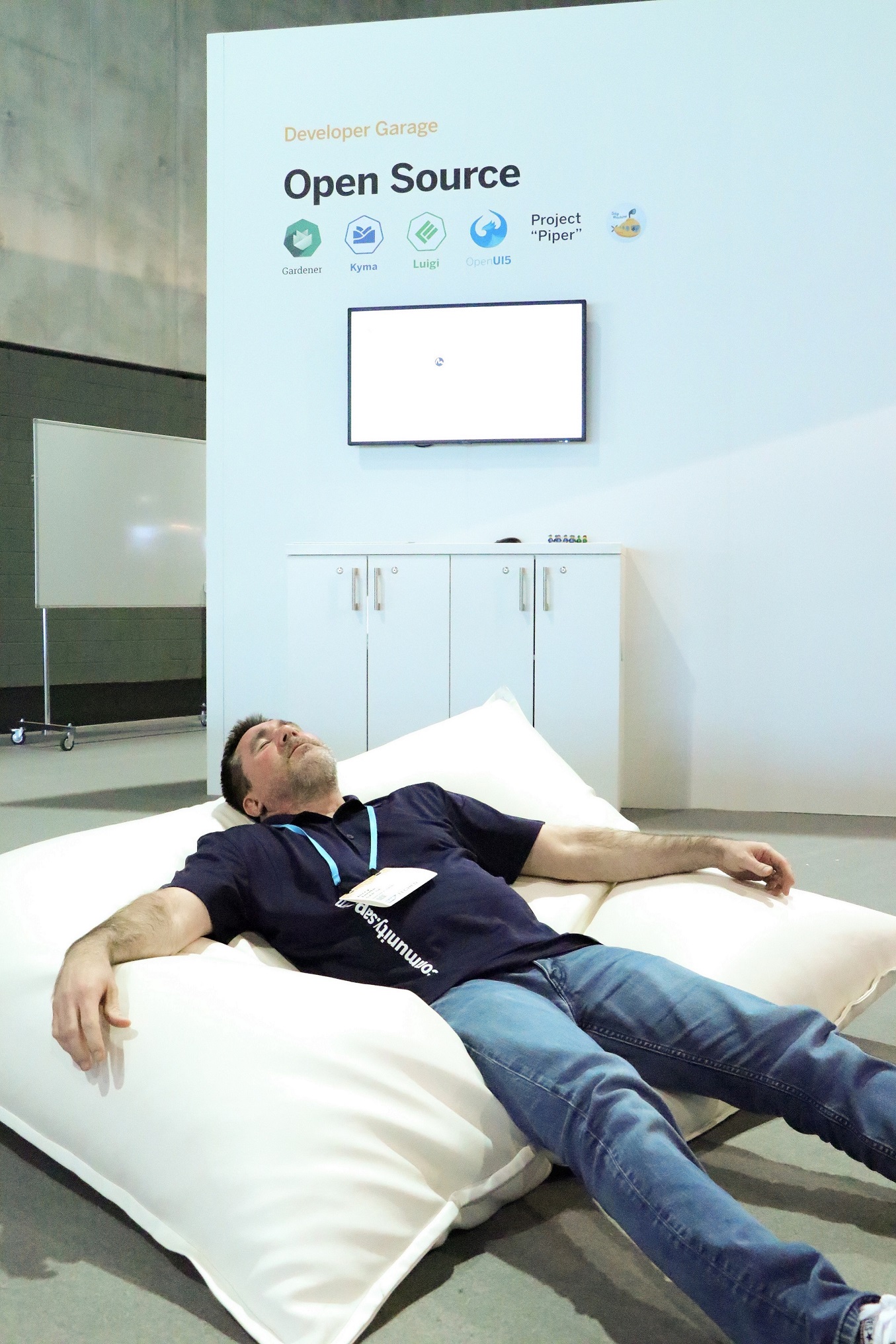 Thank you Jerry!  I don't know how you can work so hard (cough cough) all day and still put out such a great blog.  It must be the great content.

I miss Otis too.  You're invited to snuggle with Sunny the next time you're in Boston as a consolation prize. 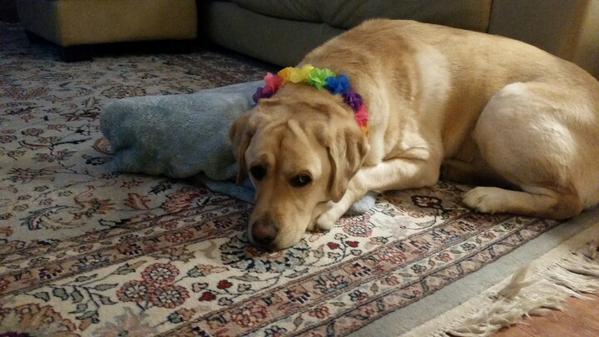 Just wanted to ask "where is the dog?" 😉