SUM offers several scenarios, which in turn have some specific flavors, like downtime-optimization. Choosing and configuring those scenarios was not standardized. With SUM 2.0 SP 06, we have put the most relevant decisions on scenario and downtime-optimization on the first three dialogs. In addition, the tool offers some helpful user interface (UI) enhancements.

See this blog for a general overview on Software Update Manager (SUM).

The well-known first dialog of SUM still asks for the stack.xml, which is required for most scenarios. This dialog was adapted to include the decision if a stack.xml is required at all for the intended scenario. We name this Scenario Category, as some scenarios belong to category “with stack”, others to category “no stack required”. 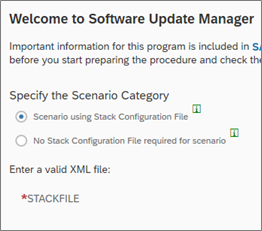 Example: “Customer Transport Integration (CTI) only” does not need a stack.xml because no SAP software is updated. Until now, it was required to set a mystic configuration parameter in a SUM control file (SAPup_add.par) to enable this scenario. Now, the scenario can be chosen directly on the dialog without such a parameter.

So, which scenarios overall do require a stack.xml, and which not? You may now ask the tool: beside the radio buttons for the choice on scenario category, the icons

The first dialog is handling the scenario category. For scenarios requiring a stack, the second dialog offers the scenario decision concerning migration, whether to use DMO. And the third dialog handles the scenario strategy concerning downtime-optimization.

Like the first dialog, the second one is well-known, it is simply shown earlier now: 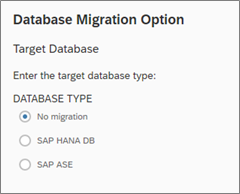 The third dialog on scenario strategy will show appropriate options. It is related to the main configuration dialog which you may know from previous SUM SP versions, offering single system, standard, and advanced mode. This dialog was adapted and is shown earlier as well. The advanced mode has retired, instead the tool offers the option downtime-optimized. It depends on the scenario which downtime-optimization feature is offered.

For an upgrade scenario, nZDM is offered:

For a migration scenario, downtime-optimized DMO is offered:

nZDM up to now required to choose the Advanced mode, only then the checkbox to enable nZDM was usable – now this option is shown more prominent on the UI. Apart from that nZDM checkbox, the only difference between Standard and Advanced was the proposed (default) number of processes on the subsequent dialog.

Downtime-optimized DMO is now generally available with SUM 2.0 SP 06 (see blog). Like nZDM, it is now offered on the third dialog on scenario strategy.

For the scenario of a system conversion (from SAP ERP to SAP S/4HANA), SUM offers downtime-optimization as well:

How to go Advanced now

As mentioned above, the advanced mode is no longer offered. According the description above, the only difference (apart from offering nZDM) were the default values for the process parameters. So, if you used the advanced mode before, and you want to keep this, simply raise the process parameters manually, either on the dialog shown, or using SUM Utilities menu Process Parameters: 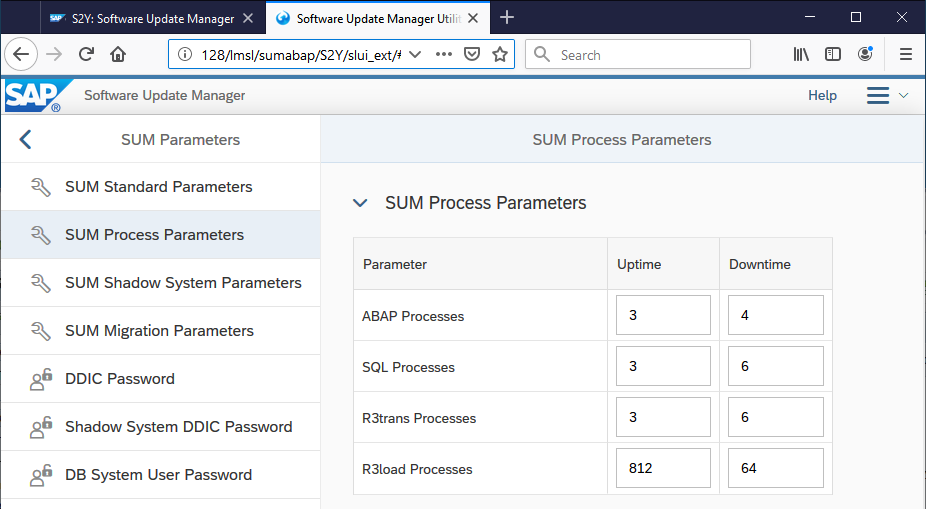 You should consider using a downtime-optimized scenario, as this is more advanced than the previous advanced mode ?.

If your scenario does not require a stack file, you select that scenario category. The input field for the stack file will be hidden then. On the next dialog, the available scenarios are offered: 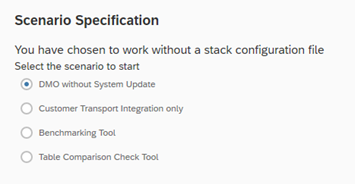 If you proceed after the scenario was decided, the browser page header will list the chosen scenario. In the following example, scenario is upgrade, and scenario strategy is standard:

And the browser page title shows the system-ID now, which makes it easier to identify the right browser page in case you run several SUM runs in parallel.

We are performing an Upgrade of our SAP Systems from EHP7 to EHP8 for ECC. We have encountered an error in the Mock upgrade where during post processing we are having an issue where on logging on to SAP all tcodes are dumping . We have proposed to restore our SUM before our consultants did a few manual interventions in post processing phases UEXP_SPDD etc.. to reach a phase were Systems was healthy without dumping. I want to know if our below proposal can help us Rewind and Resume SUM.

Will this work ? Can SUM resume if this is done ?

please use the support channel for such discussions, thank you.

Great to hear about the GA of downtime optimized DMO.

But the biggest challenge for many of our customers in their journey to S/4 is to first get huge non-Unicode 7.4 systems converted to Unicode with minimum downtime. Unfortunately the doDMO does not allow this. Any doDMO option in the future perhaps to allow for this?

Typically there will be only a few very large application tables responsible for the majority of the database size. I was considering a manual procedure whereby SLT replication is used to transfer these during up-time, especially if no software update is involved and the target is HANA. These specific tables will be excluded from the R3load during the downtime phase.

I understand that a Unicode conversion as separate project may be intensive. Nevertheless, from SUM perspective there will be no change. SUM 2.0 expects the source to be on Unicode.

SUM uses its own replication technique, independent of SLT. It is worth to mention that the NZDT approach may reduce downtime drastically.

Thanks, Boris... Wonderful explanation of these latest features of SUM.

Since most of anyDBs are moving to HANA or ASE; is SAP considering bringing back -Distribution Monitor tool(DISMON) like feature in SUM/SWPM in the near future for Unicode/migrations projects? I fully understand the NZDT approach and its available for large-sized customers but it required SAP Support/approval to drive it practically from the partner's perspective. I personally assume the distribution monitor has achieved 'Nirvana' and it's not coming back for HANA anymore, correct? 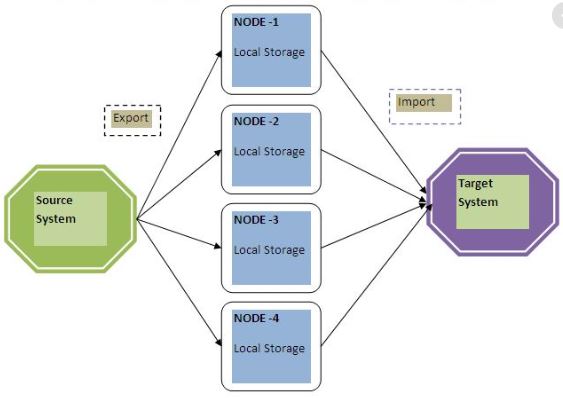 thanks for your feedback.

No, Distribution Monitor will not return, as far as I know.

It's great to hear about the general availability of Downtime Optimized DMO. It was long-awaited :).

It will be great if you could clarify some doubts -

Currently, SAP Note 2798588 is the respective note for DMO with SUM 2.0 SP 06. Your topics listed above seem correct at this point in time.

Thanks for the clarification! Looking forward to your future blogs and updates.

only going back to HOSTAGENT 7.21 PL43 works fine.

the SUM-observer-URL also did not work - is anybody using that feature ?

thanks for the notification.

I guess you have considered a browser cache refresh, and created in incident. any reply on your incident yet?

we did all, Chrome-Cache refresh, several restart of hostagent + sum,

only going back to HOSTAGENT 7.21 PL43 works

we got help from our external Basis-consultant, but did not create a ticket yet,