I am just finishing up the openSAP course Build Mobile Applications with SAP Cloud Platform Mobile Services. Wow, this has been an OUTSTANDING course! We went over just about everything you could imagine for building a mobile application. In fact, there was so much material, this could really have been 2 courses. There were 5 weeks of work, at least 4 hours per day: 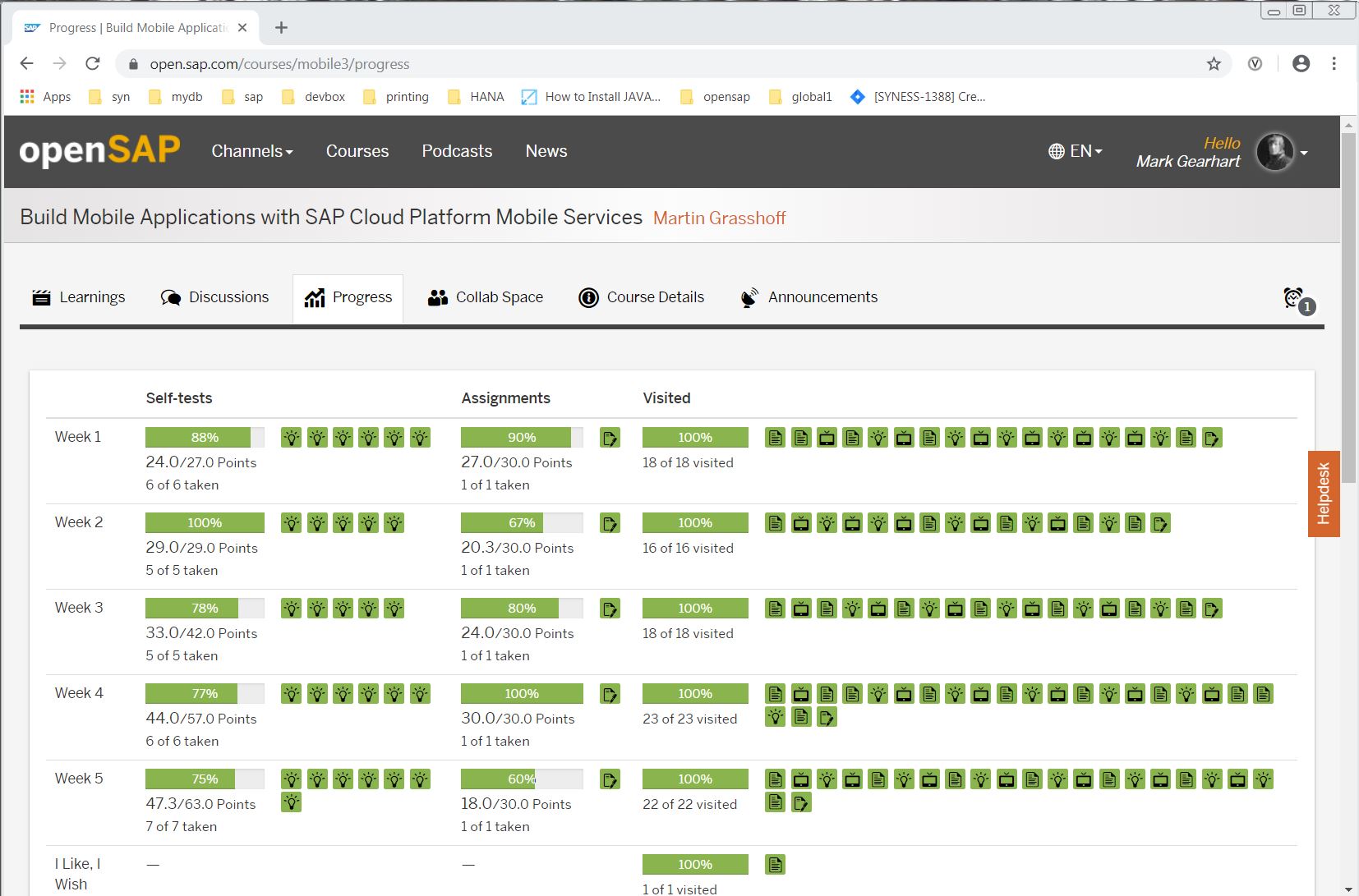 If you want to get an idea about developing mobile applications using SAP software, from beginning to end, you only need to look in this one spot.

Back a few years ago, when I worked for SAP at their  SAP NS2 division in Washington DC, I spent a lot of time with SUP, which stands for Sybase Unwired Platform. This was SAP’s first try at a mobile development platform. Early in my learning process, it became evident that SUP was one of those Agile-type projects that was trying to pin down a rapidly evolving technology. This would have been around 2015 or so. At that time, we were starting to see some Mobile Development tool kits coming from various other vendors. So, it was my impression that SAP was having a hard time with development deadlines and moving targets and evolving technologies. I was totally happy when I finally got a mobile application developed on my on-premise laptop (no cloud), and downloaded to my actual mobile device. This was a MAJOR milestone in the days shortly before OCR codes. We’re talking mobile hotspots, on-premise servers, major Android configuration things, and so on.

Despite the amount of work required, SUP was a workable product up to a point. For my SAP projects, I could not quite get anyone to commit to adoption since it was so new.

So…. I decided to turn it into an academic subject rather than a career goal. To that end, I wrote some technical articles and published them in the ISUG Technical Journal. Here is one of them: 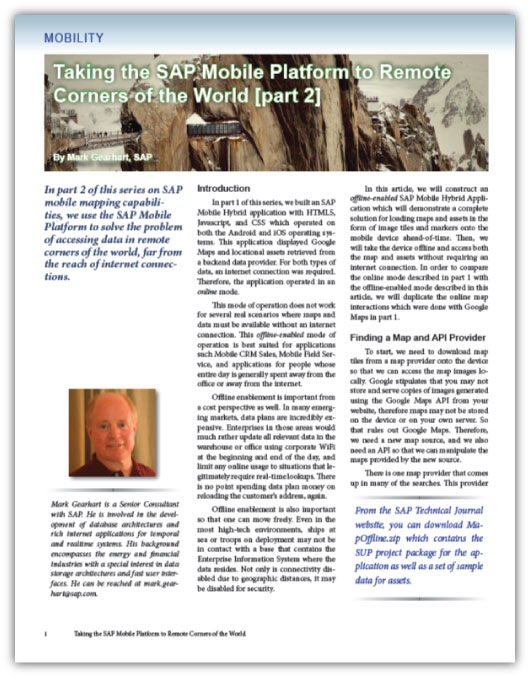 I ended up writing 10 articles. By the way, if you REALLY want to get up to speed on something, try writing some publication-quality papers on the subject.

ISUG stands for International Sybase User’s Group. Sybase was a mighty database vendor that was bought by SAP, and their ISUG group was the same as SAP’s ASUG group. After 25 years, ISUG eventually wound down. Today it is called ISUG-TECH which stands for Independent SAP Technical User Group.

The group has limited itself to a couple events per year related mostly to the Sybase products which are now part of SAP. There is a dedicated bunch of people behind the group, who are all on a first-name basis and who can see a lot of merit in keeping some type of informal collaboration going.

The new SAP Cloud Platform Mobile Services (I’m not quite sure what to call it – seems to be too many words) is quite impressive. It too has bugs and things that make me think this is also an Agile-type projects, where you put stuff out and fix it later. Actually, judging by the nature of the bugs, I don’t mean it to be a complaint against the Mobile product or team at all. During the course, all my problems were related to the surrounding plumbing of the SAP Cloud Foundry and the SAP Trial Software Download process. There are a lot of moving parts that require some collaboration from other SAP teams – Cloud Foundry, Neo, Trial Software – and it is apparent that communication is done primarily with tickets floated off into thin air. I can tell you from experience at my huge company that it is nearly impossible to get global teams of people on the same page at the same time by using tickets.

Time-wise, I did have trouble keeping up with the course. Martin Grasshoff moved through 5 weeks of material quite smoothly and quickly. You can tell he the kind of guy that has thought things through beforehand, and has rehearsed several times. This guy definitely has his PhD in SAP Mobile. The stuff is pretty intense because Martin had a lot to go through. I ended up sticking to the course material entirely and not wandering off to explore other things. If I had, I never would have finished the course. Even so, it took several runs through each week’s material to gain enough confidence for the weekly test.

I found myself wondering how large the class was, so I could gauge the popularity of this subject. I am looking at the discussions thread, and I think we lost some people around week 3 when the class ran up against infrastructure problems in the Cloud Foundry and Neo. By the end of the 5th week, I’ll guess that there were maybe 20 people in the class? I could be totally wrong. I am assuming that you’d post to the discussion threads if you are having a problem, and I don’t think anyone would have made it through the course without some type of problem or question.

Anyway, I really had fun with the course. I am not sure I could ever convince my company to run systems out of a Cloud, at least not in the near future. If this could be an on-premise product then I think I’m off and running on some applications. Of course, doing this would put things right back to SUP with lots and lots of setup and maintenance.

Speaking of companies, it was another exciting week at Deutsche Bank. You can probably find the news about them executing a cutback of 18,000 employees and a pull-out from the US equity market. Given that kind of stress, I am happy to divert my attention to SAP technical content.

Next stop, the Carolina ASUG meeting in South Carolina, USA.

OK this is totally interesting. I was completely off on my estimation of the class size. I was thinking 20 people based on the volumes in the discussion groups. In reality, here are the numbers from my course completion email, which just arrived:

1,195 learners earned a record of achievement.
6,954 learners were enrolled on day 1 of the course.
When the final exam ended, this number had increased to 10,374.

Regarding your discussion raised in openSAP forum titled “Unable to download Mobile Development Kit SDK” , we found that there was an issue in the tool used to release users after they are sent for additional review. That seems to be resolved now. You should be able to register for the download now.