What many SAP insiders have long suspected was officially announced at the DSAG Annual Congress, and at the SAP SuccessFactors SuccessConnect Annual event held in Las Vegas last week. SAP SuccessFactors has made a few announcements regarding the journey to the cloud for its customers.

Here are some highlights from the SuccessConnect Event: 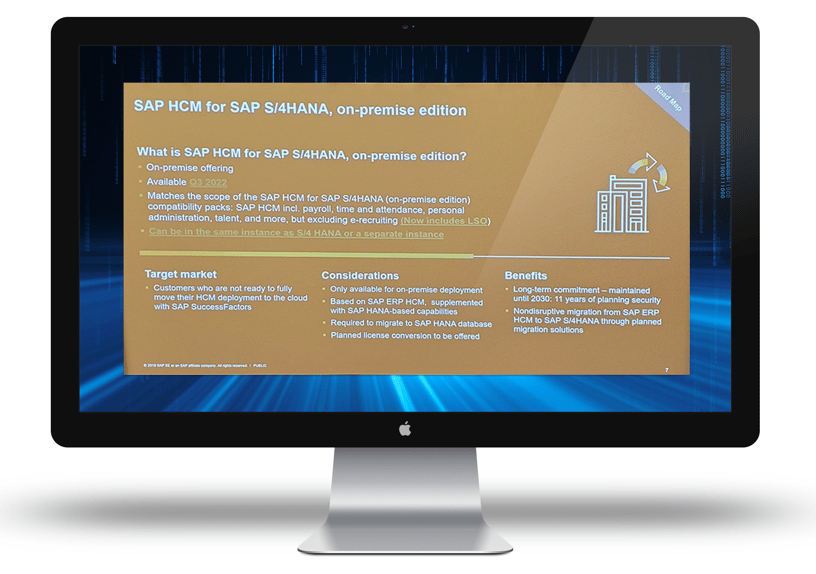 In January 2018, SAP announced a new product option that provided extended support for existing on-premise HCM customers through calendar year-end 2030 as they upgraded to SAP S/4HANA. The new option was named SAP HCM for S/4 HANA, on-premise edition, or “sidecar” for short since it was meant to run side-by-side with S/4 HANA in a separate instance. This offering was designed for customers moving to SAP S/4HANA that wanted to remain on-premise for HCM for the foreseeable future.  This offering was scheduled to be made available by 2023 and provide guaranteed on-premise support through the end of calendar year 2030. The sidecar terminology applied to the requirement for a customer to carve-out their HCM system for this in those cases where it was embedded within other SAP applications or on the same box.

This is not a new option, rather it’s the next evolution of a solution designed to give customers more time to migrate to SuccessFactors and Employee Central Payroll. The recent announcement was focused on a few changes to the original announcement from 2018: the ability to run it single instance and an earlier availability date. To summarize: What is not included in those numbers, however, is which percentage of those customers purchasing the Employee Central Payroll solution are net new customers and which percent are conversions from existing customers using SAP On-Premise SAP Payroll.

To speculate a conversion rate estimate and to get an idea of the payroll migration for existing payroll customers, let’s over-generalize and pretend that ALL 427 licenses sold to date for SAP SuccessFactors Employee Central Payroll are conversions from on-premise SAP. Of course this is not true, but it’s easier from a math perspective. And also let’s assume that there are closer to 7,500 active SAP On-Premise Payroll licenses rather than the published 9,000. That would lend to a less than 6% conversion rate. A conversion percentage that has picked up considerably within the last year, but still has a long way to go.

What I believe contributed to that spike between year-end 2018 and today is:

A) SAP has changed direction on Time Management in SuccessFactors

As originally announced, if customers had complex Time and Attendance requirements, they were not an ideal candidate for SuccessFactors Employee Central Payroll. I specifically recall the messaging from SAP that said that they had no intent to duplicate the complex functionality available in On-Premise SAP Time but rather only offer the simple basics in Employee Central.

It’s my opinion that this continuing investment in Time Management functionality in SuccessFactors was the first contributing factor to the increase in Employee Central Payroll sales.

In the early days many customers viewed the migration from on premise SAP Payroll to Employee Central Payroll as a complete re-implementation, which I suspect demotivated many who had made a large investment in their implementation and deployment and who did not wish to consider redoing it.  Messaging was updated in 2018 to say that a reimplementation was not indeed required.

In addition, SAP SuccessFactors has added an option to enable customers who do not use Employee Central (EC) as their core HR system of record to use Employee Central Payroll (ECP) as a standalone deployment. It will require a limited implementation of EC, leveraging the Functional User commercial option.

More relief for on-premise customers...thanks for sharing this...

We are just now getting ready to implement HCM Payroll.  Some things are currently used, but we utilize ADP for our payroll solution.  They just informed us that they are deactivating the version we use Spring 2021, so we are in a bind.

We are working on implementing Success Factors, but it looks like it will not be completed by that time.  We are not on S/4 HANA, we use Oracle.  Is the software still available for download for on-premise non HANA database?

Any information or advise you can provide would be helpful.

Hi Kathy.  I will forwarded your question to SAP Payroll @imran.sap to assist.  He returns on Monday from leave.  he will lead you in the right direction.   Thanks, Danielle

Thank you Danielle.  I appreciate the response.

We have no plans currently to migrate to S/4 HANA, due to budget constraints here, so hopefully we can implement with the Oracle database in use.

I think it would be helpful if you shared more details to assist him, the more the merrier 🙂

When you say implementing SuccessFactors does that mean ECP?

You mention that you are not on S/4 HANA and that you use Oracle, is that for your ERP or your database?

What software are you asking about downloading exactly?

Yes, we are in the process of implementing SuccessFactors ECP.  We have SAP ERP EHP 8 SP 14 installed here, with Oracle 19.0.0 database.

It has been decided to implement HCM Payroll on-premise here. Of course we currently have several things configured with payroll already, just not everything because we utilize ADP.

I am wondering if it has to be implemented with HANA only, or can we do it with the existing Oracle database.

If it has to be done with HANA only, it will be more costly for us because we will have to purchase additional hardware in order to complete the implementation.

If we can use the Oracle database, we will be able to create additional VM servers for the implementation if needed, which we already have.

Can you please send me an email at danielle@labs.epiuse.com and I will connect you with SAP for further specific discussion.  Thanks, Danielle