On the last day of SAP TechEd in Las Vegas, I was a man on the move — and just sick enough from overindulgence to be totally confident. 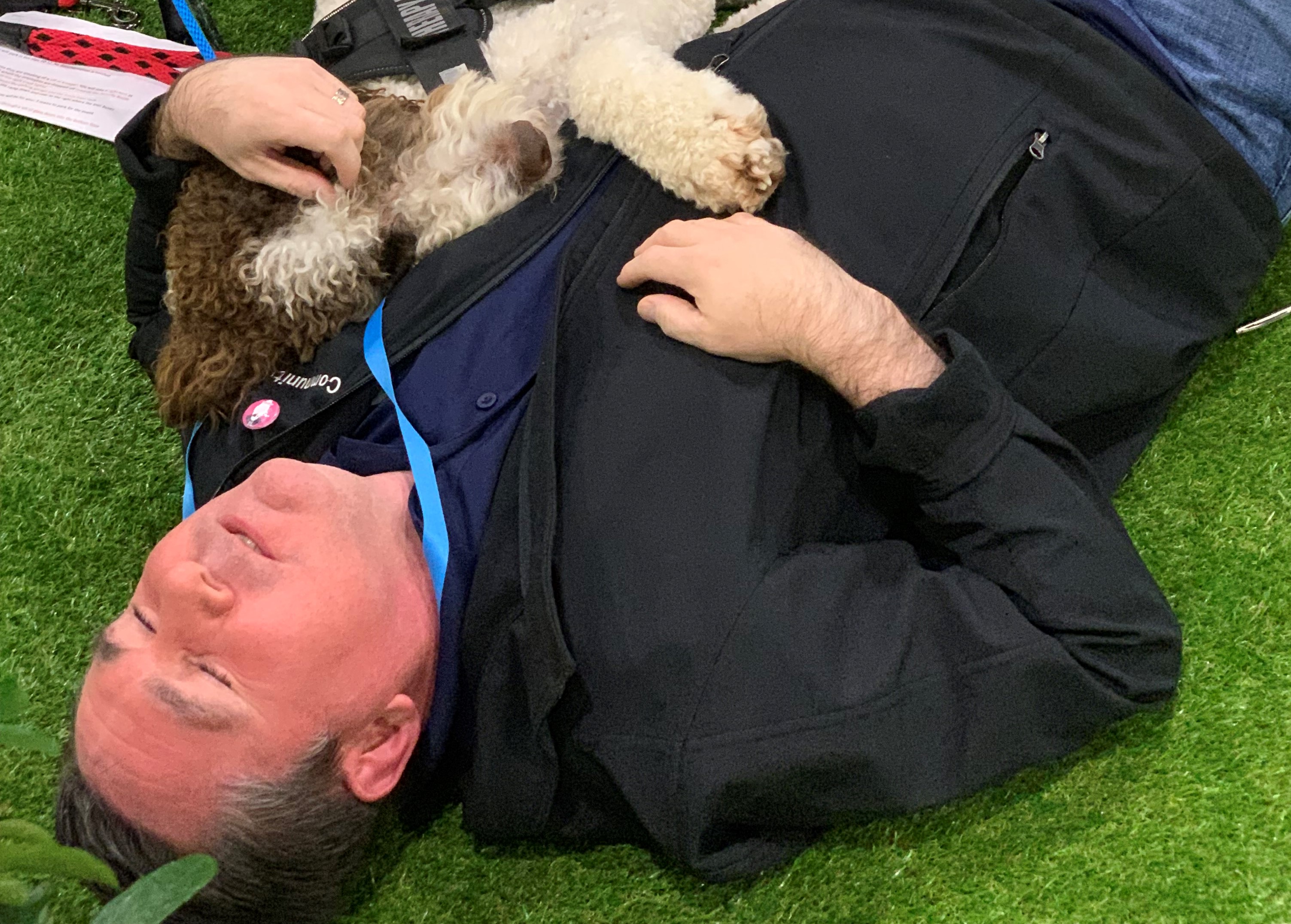 Pictured: man’s best friend and a sick, confident man totally on the move.

Despite what I wrote in my previous recaps (I’m sure you’ve read them already — multiple times — but here are links to my posts for day 1 and day 2…so you can read them again before continuing; you’re welcome), I really was on the move during the event. When I got home? Not so much. While a colleague won a nice chunk of change playing the slots on Thursday, I managed to squeeze in a couple hours of sleep before flying back to Philly in the early hours of Friday…only to arrive and discover that my car wouldn’t start. So I waited several hours for a tow driver to come to the airport parking garage — to get me to a mechanic. And home.

I don’t like to sing the blues, but if your co-workers are winning money while you’re paying for a tow during Friday night rush hour, then you can’t help but think, “If it wasn’t for bad luck, I wouldn’t have no luck at all.”

Sorry, where was I…besides stranded in a parking garage? Oh. Yeah. Vegas. My recap of Thursday, September 26 — the last day of SAP TechEd.

On Thursday, I kicked things off by sitting in on video interviews with Technology Ambassadors (have you seen our cool influencers finder yet, BTW?) — and we’ll share some of those in the coming weeks — then conducted a Live Studio interview about a favorite topic: accountability and data integrity.

If you weren’t one of the millions who watched me live…what’s your excuse?

Note to self: Grow back the beard to cover up your so-called face, Janda.

Maybe you don’t find that topic particularly compelling, but I lived through GDPR and its impact on SAP Community (this stuff doesn’t write itself, ya know), so I was very happy to host that session. On the other hand, if you’re more interested in a Live Studio session from Thursday that related directly to SAP Community, check out this conversation between SAP Mentor Chris Kernaghan and Craig Cmehil, head of the Community & Influencers team. They talk at length about our influencers programs, including SAP Mentors, Technology Ambassadors, and SAP Champions. (As mentioned in this recap and the previous two, I sat down with several Technology Ambassadors in Vegas, I partied with the SAP Mentors on Monday night, and I forced the five SAP Champions at the show to talk to me.)

True to form, I managed to bomb Craig’s Live Studio video a couple times. See if you can spot me. One hint (and proof that I was indeed on the move): I was prepping for a video interview with Abhinav Shrivastava, one of our scholarship winners. (Teaser: He talks about his key takeaways from SAP TechEd, and we’ll be publishing that video next week. Our first interview with him — in which he talks about his expectations for SAP TechEd — appears in my recap of day 2. But you already knew that, didn’t you?)

Dennis Padia, another scholarship winner, also took the time to talk to us while at SAP TechEd. (And I’ll be talking to him again very soon. That’s a spoiler, BTW.)

You may notice that I didn’t wander aimlessly into Dennis’s video. I somehow managed to stay out of Craig’s preview video for the last day of the show too.

In that preview, Craig covers many of the cool elements of the Developer Garage/Community Lounge — all of which you can expect to see in Barcelona! Yep, we’ll have unconferences/meetups (and I’ll be running that area of the Community Lounge…expect a post about that next week), innovation talks (we’ll share details soon), and all kinds of other learning opportunities. Representatives from our influencers programs will be in Barcelona, and we’ll have a post about the SAP Champions and SAP TechEd next week as well. In fact, let’s just say that we’ll start early next week with a post about everything happening in Barcelona.

Alas, I’m afraid Puppies with Purpose, a U.S.-based nonprofit organization, won’t be with us. That might be a good thing…at least for me. When I staged that photo at the beginning of this post (yes, it’s staged…I wasn’t sleeping, thanks for asking), I drew a bit of a crowd, and that led to this pic…which SAP TechEd retweeted, something that likely didn’t do my career any favors. (I’m sure execs don’t want to see an employee literally lying down on the job.) 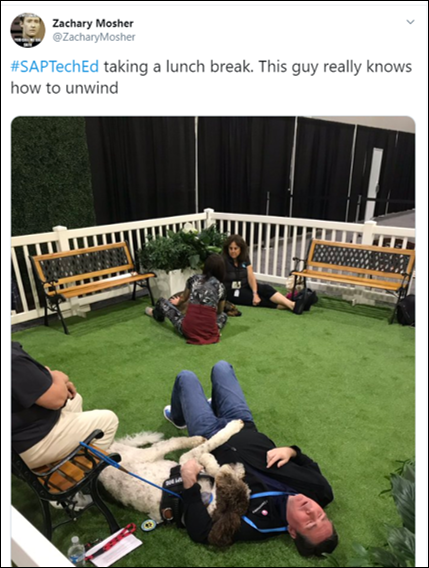 But there will still be plenty of fun, educational activities. If you’re coming to Barcelona, you’ll be able to complete tutorials and earn prizes — just like Vegas! In Vegas, visitors finished more than 2,400 tutorials, and I’m counting on seeing an even higher number in Barcelona. 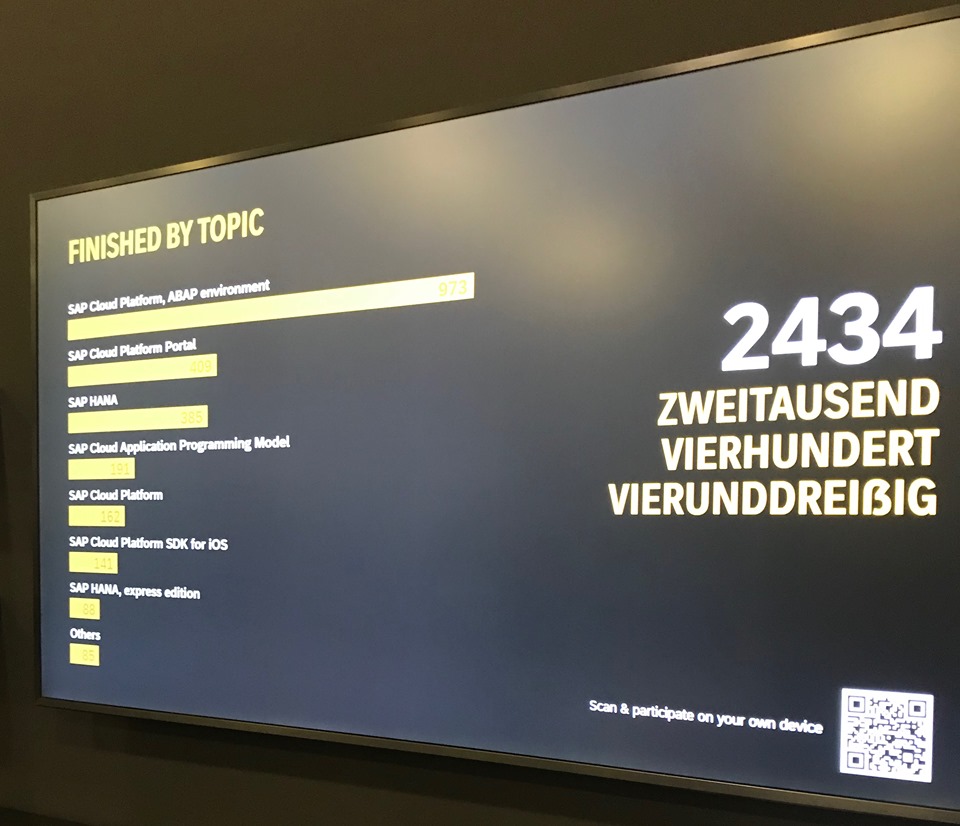 I don’t like to gossip, Barcelona, but I have to tell you: Vegas totally said you aren’t good enough to beat 2,434 tutorials. You aren’t gonna let them get away with that, are you?

Other entertaining activities will return as well, such as the headshot photographer, mural artist, and more — and attendees will have plenty of exciting ways to engage with SAP Community members (including my teammates and me)! 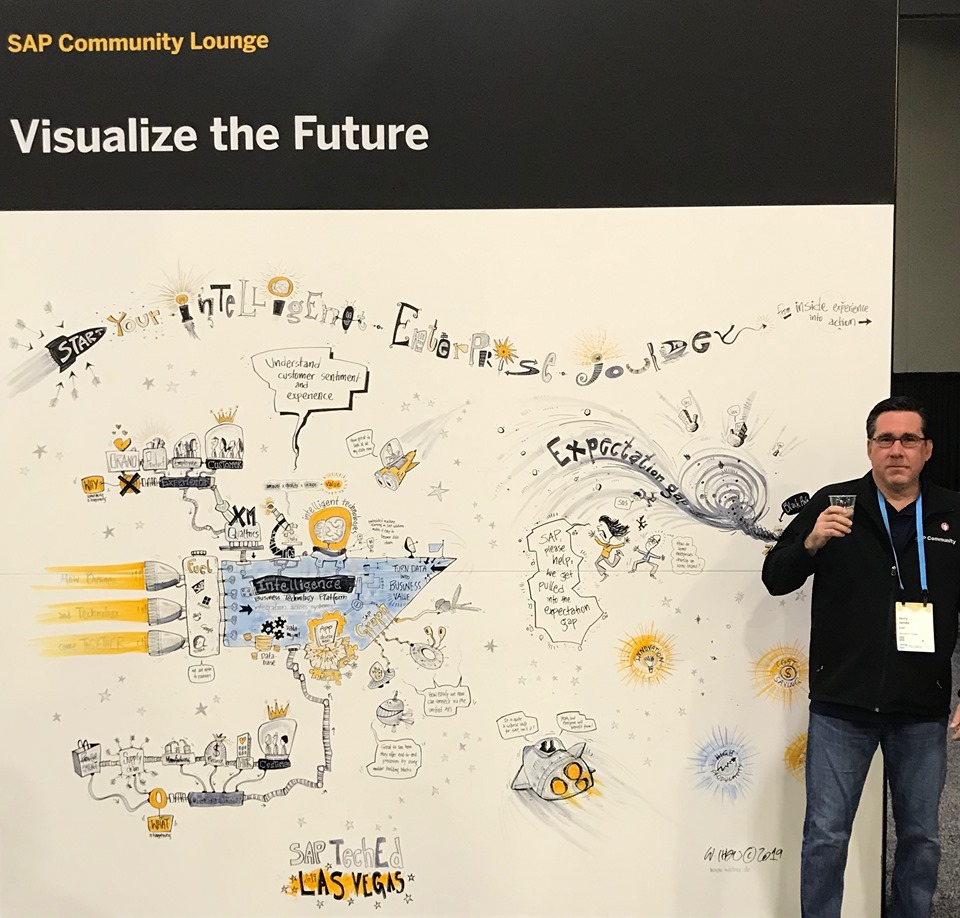 “Cheers, Vegas! Now can someone help me pack this mural into my carry-on bag?”

Fingers crossed that my car starts when I get back.

Love the TechEd blog series Jerry Janda - very entertaining! and was great to meet you in person. Love your film references in all of this series, learning Kung-Fu and testing your skills against Morpheus would be great and your photo outside the Puppies with Purpose area is hilarious. Thanks for not only writing and informing but also making us smile!

My pleasure! Thanks for reading. Was great to meet in person finally. I hope you loved Vegas. Now I gotta get to Australia!

Absolutely! You are welcome to Melbourne anytime mate!

Love the picture with the dog! So cute (the dog... LOL)

Yeah, I assumed you meant the dog. 🙂