I was somewhere near a rare-book store on the edge of the desert when the gin and tonic began to take hold. 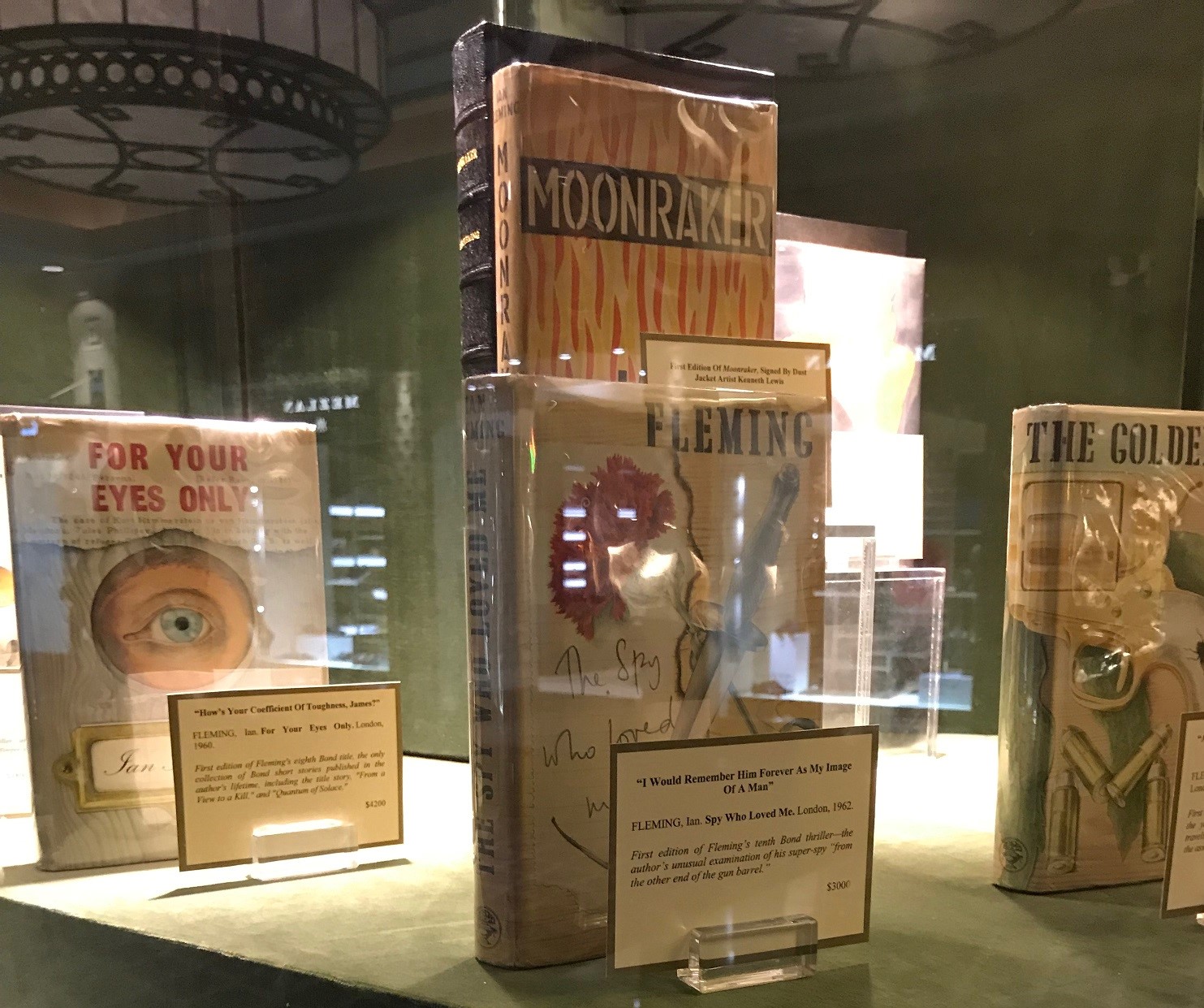 My name is Janda. Jerry Janda.

SAP TechEd began uneventfully enough for me. I was at the SAP Mentors reception Monday evening, and it was nice seeing some familiar faces again (Susan Keohan) — and meeting some familiar names for the first time (Phil Cooley). (As an aside: Both Sue and Phil are two of our new SAP Champions, and I was also fortunate enough to conduct video interviews with two other champions, Fausto Motter and Marssel Vilaça, on Tuesday. I’ll be speaking to all the SAP Champions in attendance this week, and we have interviews lined up with even more SAP Champions for Barcelona, so expect those videos in the coming months.)

But back to Monday night. I suppose the trouble started when I bumped into colleagues I hadn’t seen in many, many years, and as we caught up and laughed about the old days (which pretty much describes all my days these days), one drink became two became…well, I don’t want this to be a long blog post. Long story short — that bookstore was next to the brewery where we held the reception, and by the time we got to last call, I wondered how many hands of Blackjack I would need to win before I could afford those first edition James Bond novels.

Look, my point is this: I’m here to write daily recaps of the show, and my recollection of Monday is hazy. Lucky for me, Craig Cmehil was on the case early that day, breaking down everything we had planned in the Community Lounge.

Craig was also on the case Tuesday morning — this time letting attendees know what they could expect in the Developer Garage after they hit the show floor (once the keynote ended). He did a great job, especially considering I stumbled into the shot around a minute into recording. Craig didn’t even lose his focus. That’s pure professionalism, ladies and gentlemen…something you shouldn’t expect too much of in this post.

In my defense, my mind might have been wandering, continuing to scheme on how to get those James Bond books. Still, considering how my Monday night went, I was pretty proud of the grueling pace I managed to maintain throughout the day. 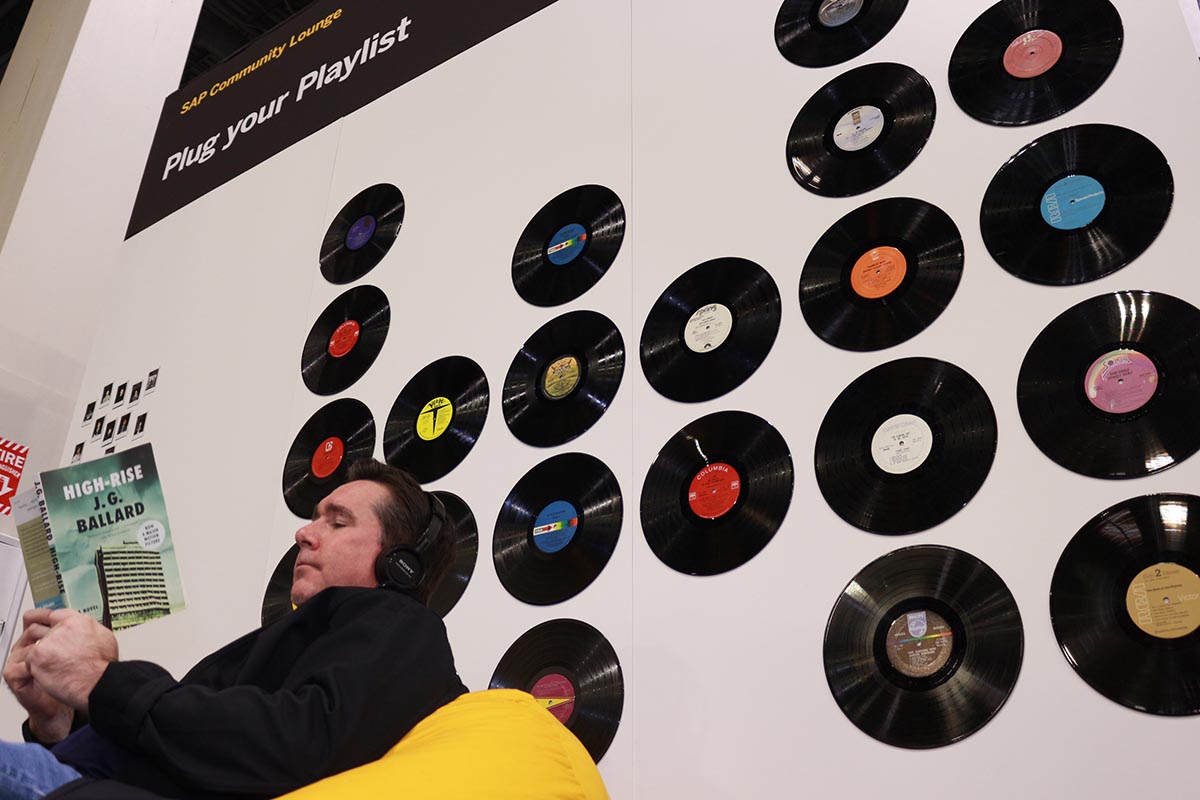 “What do you want? Don’t you know I need to unwind after crafting the perfect tweet?”

That shot above is from the Plug Your Playlist area of the Community Lounge, a spot(ify) where you can share your music and listen to recommendations from other members. It’s definitely an area you’ll want to visit before the show ends on Thursday. (Don’t believe me? Maybe someone else will convince you at the end of this post.)

I wasn’t the only member of the SAP Community crew hard at work. Over in the meetup area, my teammates were helping members schedule “unconferences” so they could connect with like-minded individuals looking to discuss topics of mutual interest informally. Just about anything is on the table! 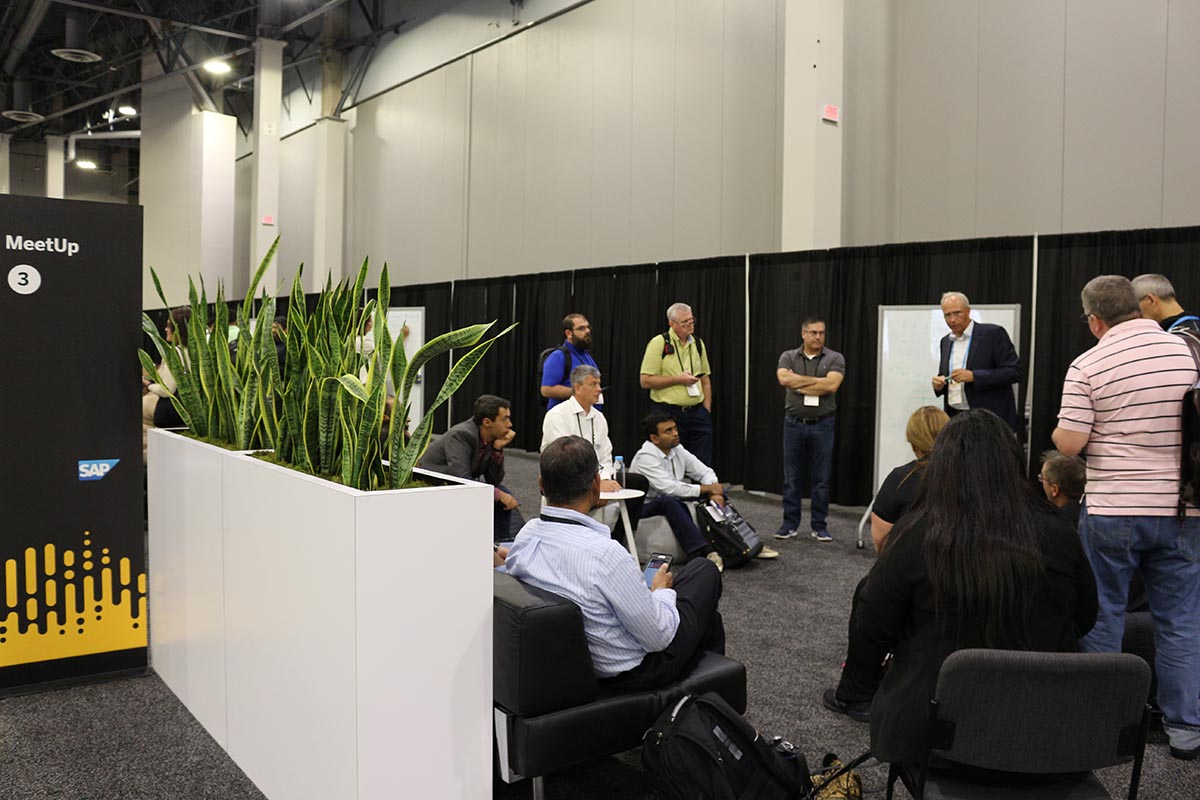 “So we all agree that Jerry Janda should stop blogging on SAP Community, right?”

I could go on and on, but let’s face it: We all know I’m not going to put in that level of effort, so let my colleague Audrey Stevenson tell you about unconferences and how you can participate.

The Community Theater is close to the meetup area, and throughout the week, it will feature innovation talks presented by SAP Community members for SAP Community members. I could give more details, but that feels like work, so once again, I’ll rely on a colleague — Mynyna Chau — to provide the explanation.

In between the Community Theater and meetup spaces, you’ll find the SAP Runs SAP area. Here you can discover how SAP uses its own solutions internally. There are even VR demos! “Is this real life? When do I get to learn kung fu and test my skills against Morpheus?”

I’ve focused a lot on the Community Lounge, because that’s where you’ll catch me lounging (Sorry, did I say “lounging”? I meant to say “working”) this week, but I should point out that the Community Lounge is part of the Developer Garage, and there’s plenty going on there as well. For example, there’s the always popular App Space, where you can receive hands-on training that you can take at your own pace. Of course, if you’re a mediocre writer and not a developer, your pace will be awfully slow… 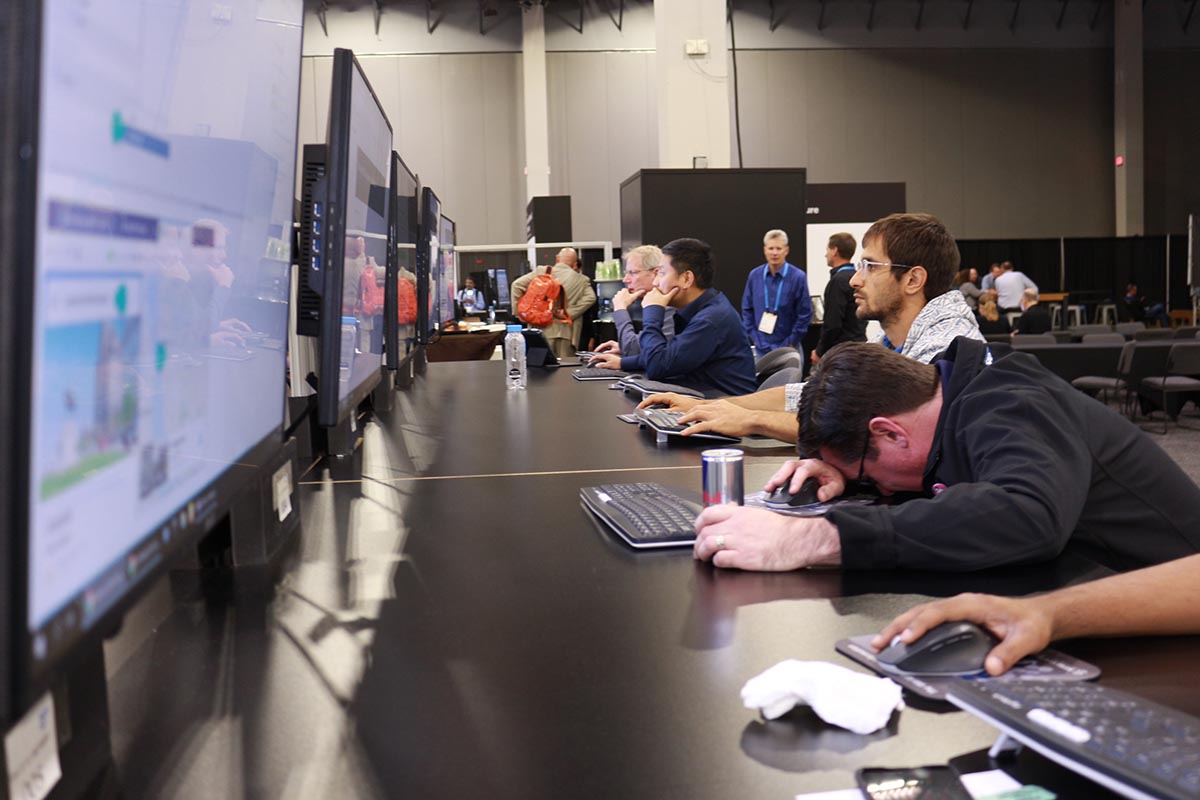 On the other hand, if you are a developer, you can actually earn prizes as you make progress. Many developers already have — with hundreds of Developer Garage visitors completing App Space tutorials today. 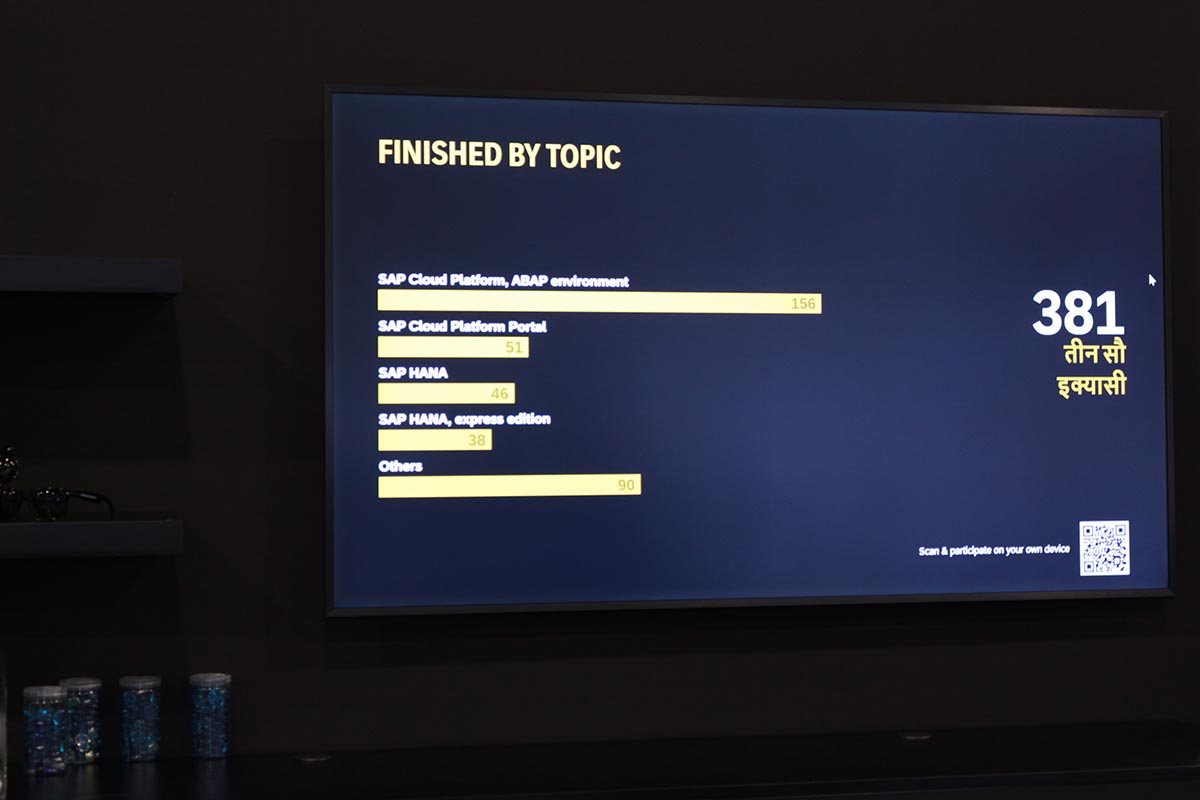 C’mon, Las Vegas, we can do better than 381 tutorials finished. Stop by, learn, and earn!

Then there are the CodeJam sessions, Code Review trainings, and Lightning Talks — all of which provide awesome opportunities to expand your knowledge. They definitely drew crowds today, so you’ll want to grab a seat tomorrow and Thursday for the presentations that interest you. 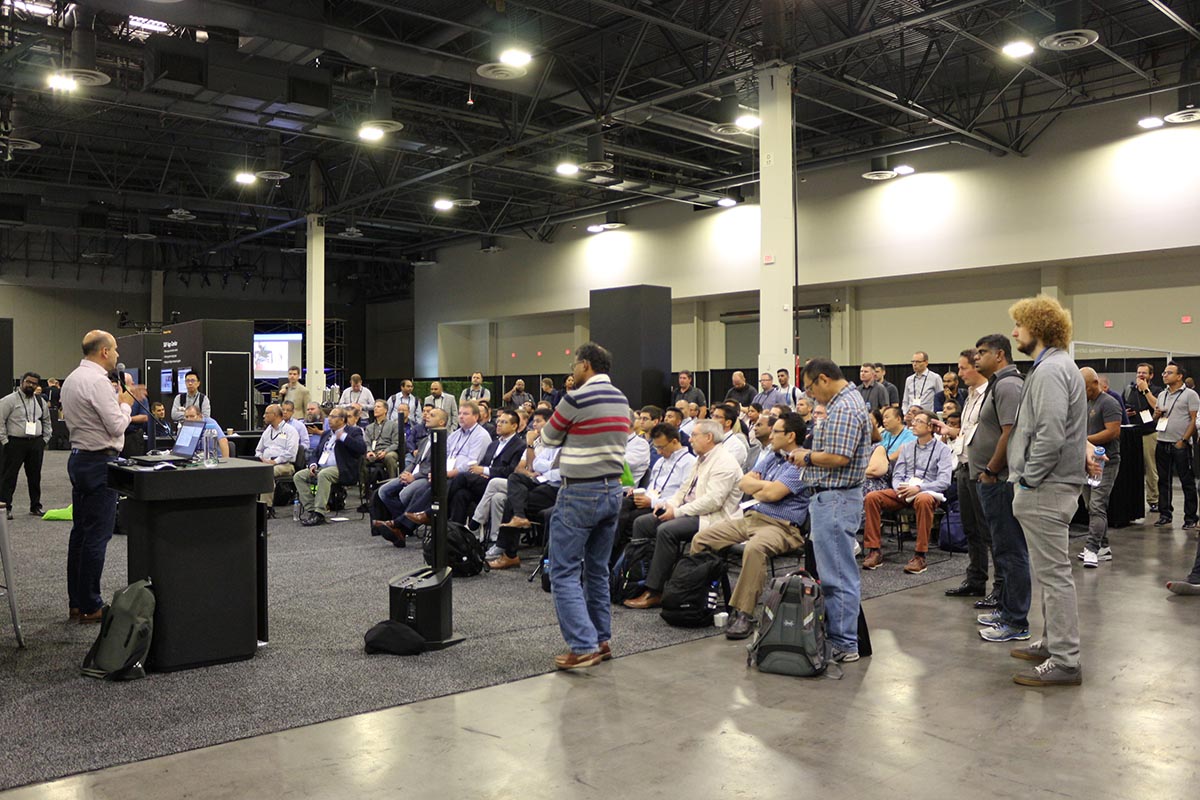 The Developer Garage is pulling people who want to learn all they can at SAP TechEd.

Everything I covered above will also occur tomorrow and Thursday…BUT we also have new stuff planned for the remaining days of SAP TechEd Las Vegas. Starting tomorrow, we’ll have an artist in the Community Lounge, drawing a wall-sized mural representing key takeaways from the show, and a photographer will be taking headshots. On top of that, for the first time ever, we’ll have Puppies with Purpose — an area where you can pet some service pooches and regain a sense of calm. 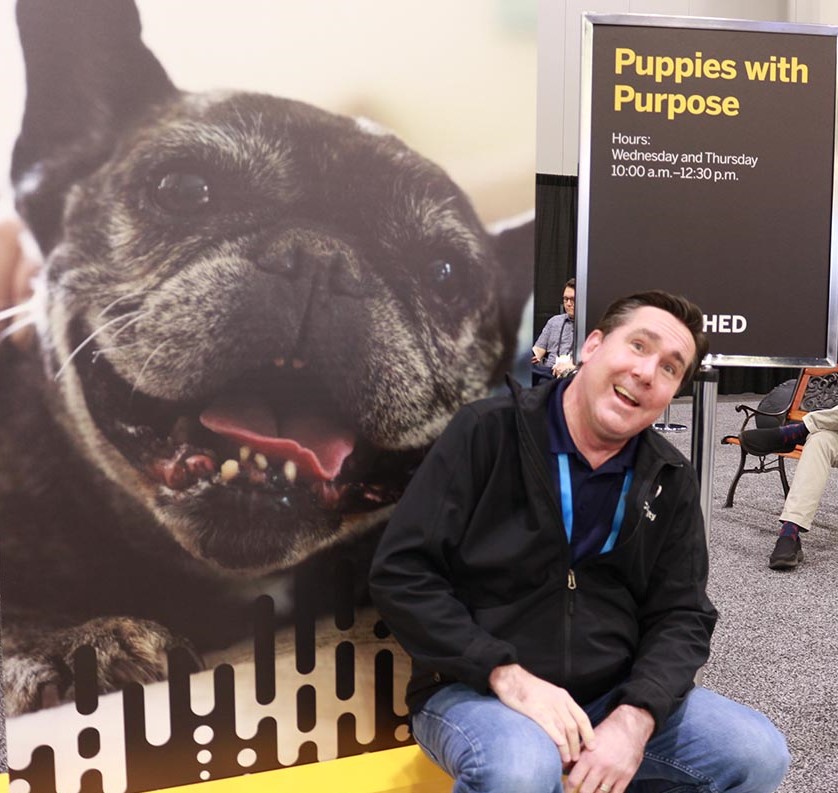 Whew. That’s a lot, ain’t it? I think that’s it for me. You have no idea how much it took for me to write this post. 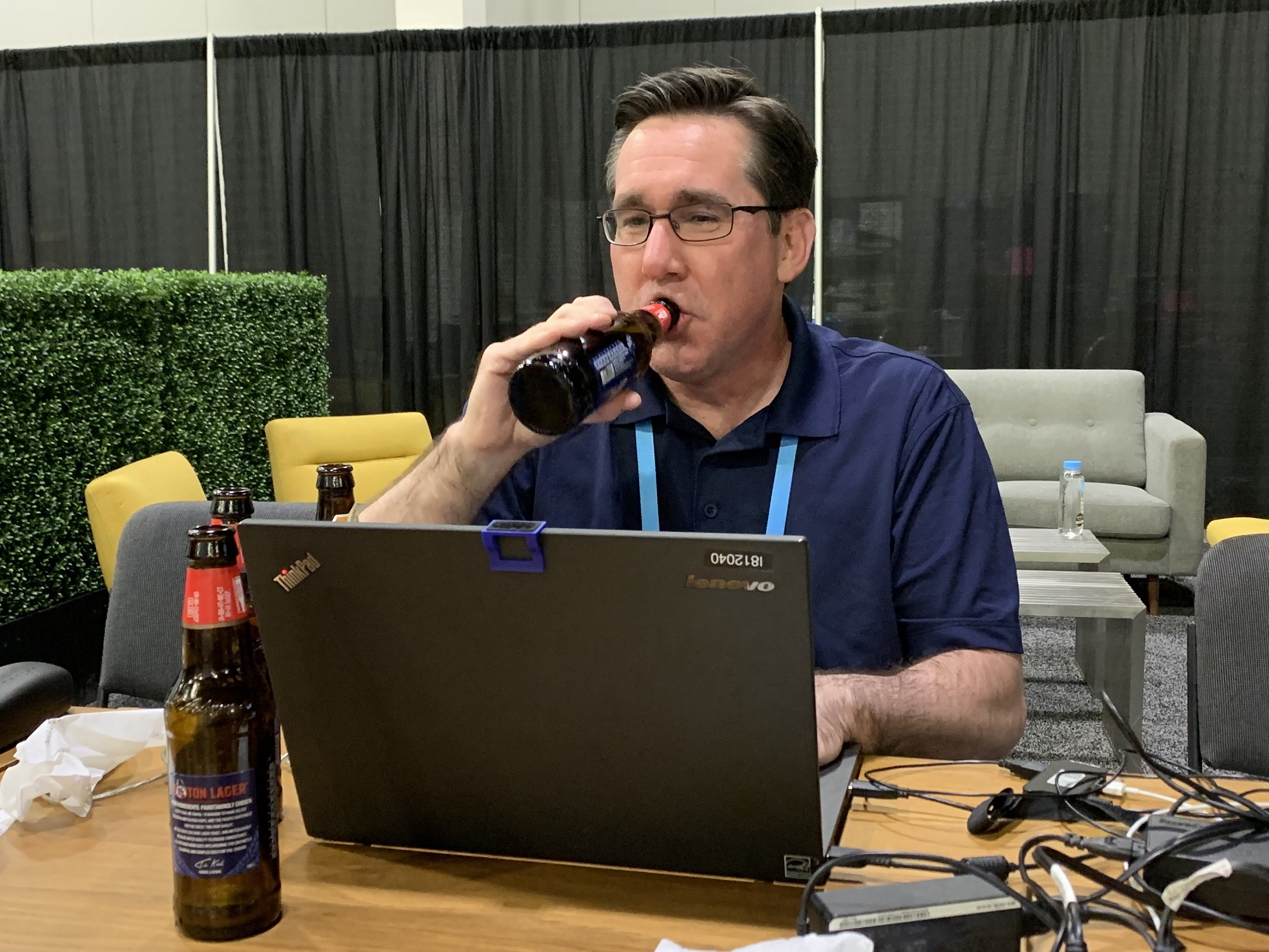 Pictured: How much it took for me to write this post.

In conclusion: Here’s a preview of what’s to come at SAP TechEd Las Vegas– once again delivered by Craig, who clearly understands the importance of taking a break in the Plug Your Playlist area.

Catch you tomorrow for another recap!

Wow, this is something really great and nice. I liked this post.

Great summary of what's going on overthere at SAP TechEd Las Vegas. Hope, to read more about it this week 🙂

I'll try to post another recap later, but as you can see, I'm super-busy. 😉

A great first day and an awesome recap:).

PS: In the second video of Craig we can see Jerry hiding:)

For a guy who has made movies, I really should know how to stay out of the shot. 🙂

Jerry, you not only inform us, but you entertain us!   Thanks for the great re-cap (love the play on 'Fear and Loathing in Las Vegas') and you're a star at fun pics too!

Thanks, Sue! Was great catching up this week. 🙂