Very often I hear that BW is lacking a global key performance indicator (KPI) repository. It was for a long time already possible to create a calculated key figure (CKF) or restricted key figure (RKF) in BW on InfoProvider level. One could reuse them on different BW Queries based on the same InfoProvider. However, it lacked the possibility to do it global across different InfoProviders and it always needed a modeled query to be created or changed. This had to be done usually by persons from the IT department and therefore needed IT involvement. Two developments now made it possible to create a global key figure repository across InfoProviders for the end user at runtime.

With those two developments, it is now possible in the analytics engine to also enable the end user to search for KPIs which are RKF/CKF and assign them on the fly to the query. With this a global key figure repository can be build up in BW/4HANA.

As written in the standard documentation from BWMT 1.19 onwards it was possible to create linked components and transfer queries also to other InfoProvider having the same structure. This is also possible for reusable components like RKF and CKF. It is now possible to define a KPI centrally and to add them to different InfoProviders. They then can be leveraged on each of those InfoProvider. If RKF or CKF is changed all linked components get changed centrally. As consequence, a central maintenance of KPIs is possible. If needed a linked component can also be decoupled from the source but then the central maintenance gets lost. In addition one can centrally search for KPIs and edit them in the BW modelling tools. The only open question left was how to consume them on other places then the BW query designer or the BW workspace query designer.

2.     Dynamic Restrictions and Calculations created by End User on the Fly

With BW 7.5 SP4 and Analysis Office 2.4 we started our roadmap for sheet based report definition which was described in the blog ‘Query less Reporting in BPC embedded’. The main part of your first delivery was the ‘restriction on the fly’ which is described in the blog  ‘Planning Engine Improvements for BPC Embedded Model, PAK and BW-IP with BW 7.50 SP4′. Before it was only possible to add them in a central modelled Query or the BW workspace query designer. Now the end user can create KPIs through restrictions and formula on the fly. In BW 7.50 SP16 and BW/4HANA 2.0 SP 4 we also will lift the limitations that restrictions can not be created on calculations. This enables this feature also for a much broader scope. In addition, custom aggregations will be possible based on BW 7.50 SP16 and BW/4HANA 2.0 (See blog). However, we still were not able to add reusable components (RKF, CKF) on the fly.

3.     Adding reusable components on the fly to the query.

With NW BW 7.50 FP 16 (and note 2823850) and the upcoming BW/4HANA 2.0 SP 4 we enable the analytic engine now also to add reusable components like RKF and CKF on the fly. First one can search for them and them add them to an existing query. An example implementation was provided in transaction RSRT2 in mode ABAP_BICS. An adoption on the upcoming AO 2.8 release is planned in an upcoming support package.

Here are following steps done by a business user in RSRT as example UI . 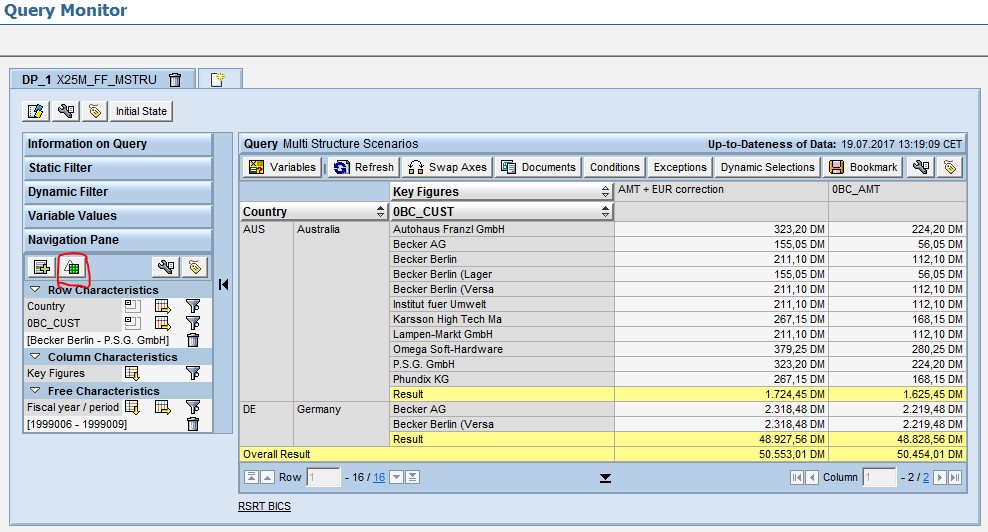 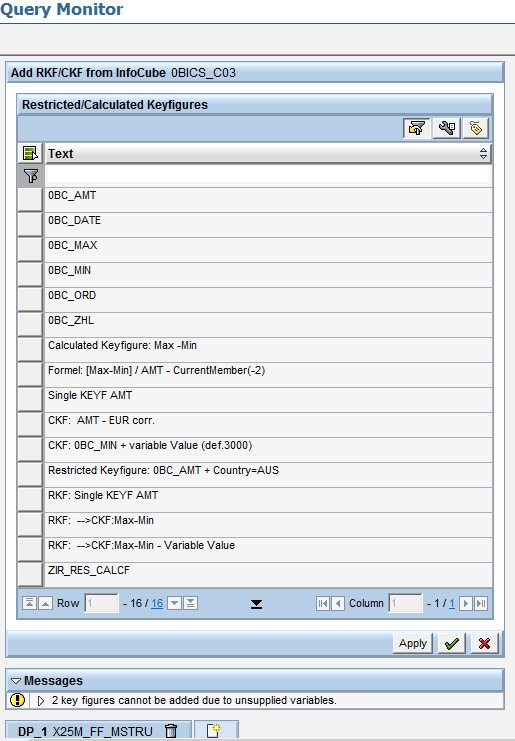 The example is shown in RSRT but an adoption in Analysis Office and BW Web UI is planned.

BW Web UI will be deliverd with the upcoming feature pack 4 in BW/4HANA 2.0 SP4. 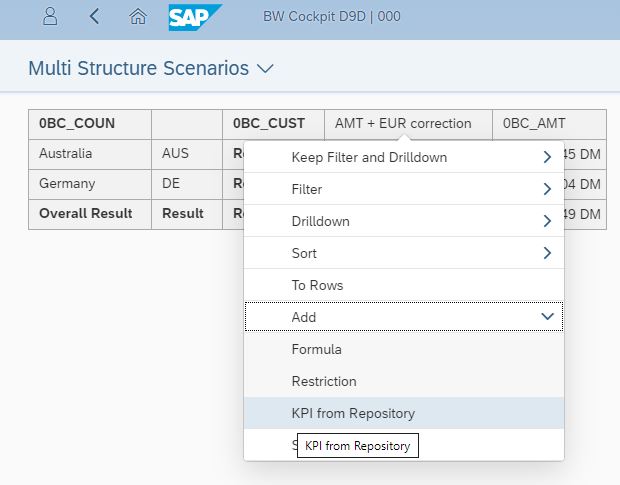 Then the list of base and reusable key figures comes up. We pick first the calculated key figure 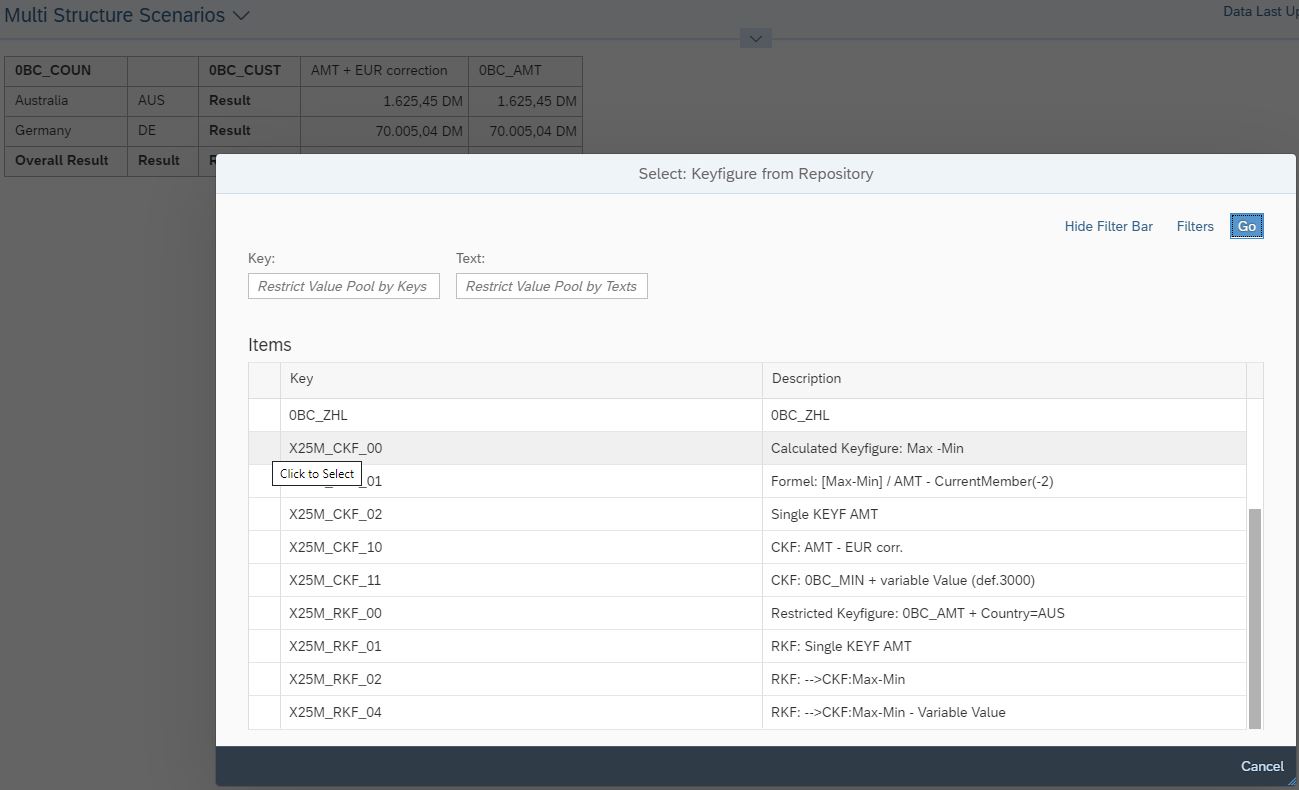 Same I can do for restricted key figure. Here a restriction to Australia. 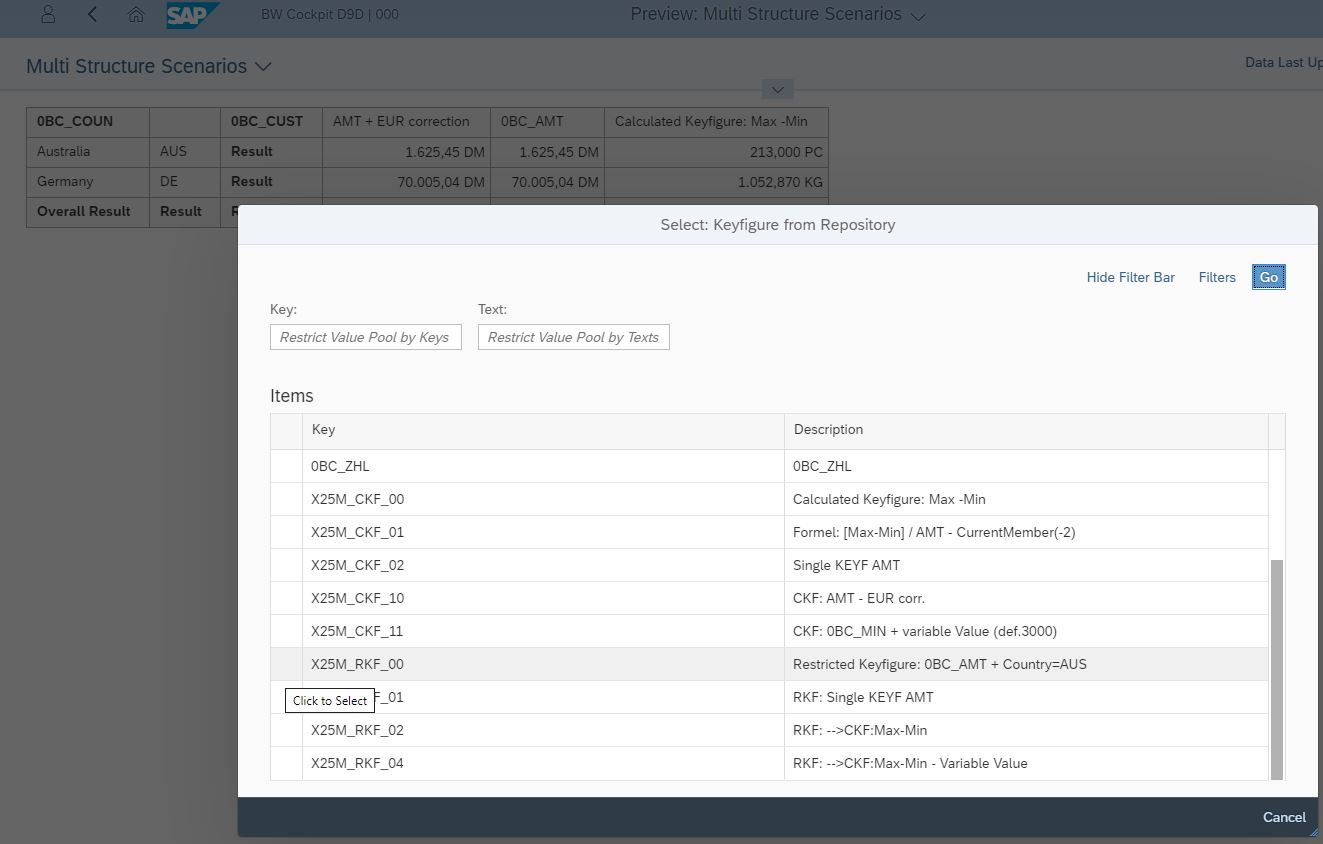 Then also this restricted key figure is shown.

I just noticed that the links you provided don't work from outside the SAP network (see http://support.wdf.sap.corp...). For all externals: Linked components from VisualBI...

It should work now. Thanks for the hint

We just recently upgraded from 7.5 SP7 to 7.5 SP18 and via a trace can see that all of the RKF and CKF key figures are being evaluated when running through a BICs connection.  One of our data providers has over 1500 global key figures and we have noticed that this new functionality is causing poor query performance.  Is there a setting somewhere that will turn this functionality off?

we have seen this performance issue as well since our upgrade to SPS18. In traces we saw that program SAPLRZD1 is suddendly taken up to some seconds in traces. Is this what you also regognized?

This was a performance regression in cases like yours

But as consequence as with the SAP Note 2905346 the current selection on structure elements is always taken into account some scenarios might show a different behavior, e.g. SAC custom group dialog provides less entries as expected.

For this you may use the RSADMIN parameter “BICS_INIT_KIDS_F4” set to “N” (disabled) to disable the check implemented by the SAP Note 2905346 until the issue and observation is fully analyzed and corrected.

To maintain RSADMIN parameters please use the report “SAP_RSADMIN_MAINTAIN” (via SE38).

If Problem stays open a ticket

Thanks for the feedback.  I have applied these notes and the issue still exists.  Currently have a ticket opened with SAP.

​A Pilot note was introduced to disable it meanwhile.

2984737 - BICS : performance issue using queries based on infoproviders with a huge number of RKFs and CKFs

Final status see status of this note. Meanwhile create a ticket to be added. In you ticket this was added

the functionality removed by the note is not used by any Java BICS based client.

It was planed to be shipped with AO this year, but this does not happen.

To activate it the rsadmin parameter "BICS_ENABLE_ADD_RKF_CKF" with "X" has to be set.

Due to a performance issue in a functionality used by enhancement in note 2812687, this note disables the functionality.

The performance is in general improved with note 2947723.

Yes, program SAPLRZD1 is running for all RKF and CKF on the info cube which is taking up to 18 seconds on some of our info cubes.

the functionality removed by the note is not used by any Java BICS based client.

It was planed to be shipped with AO this year, but this does not happen.

To activate it the rsadmin parameter "BICS_ENABLE_ADD_RKF_CKF" with "X" has to be set.

Due to a performance issue in a functionality used by enhancement in note 2812687, this note disables the functionality.

The performance is in general improved with note 2947723.

See answer below on Thomas Quäbicker